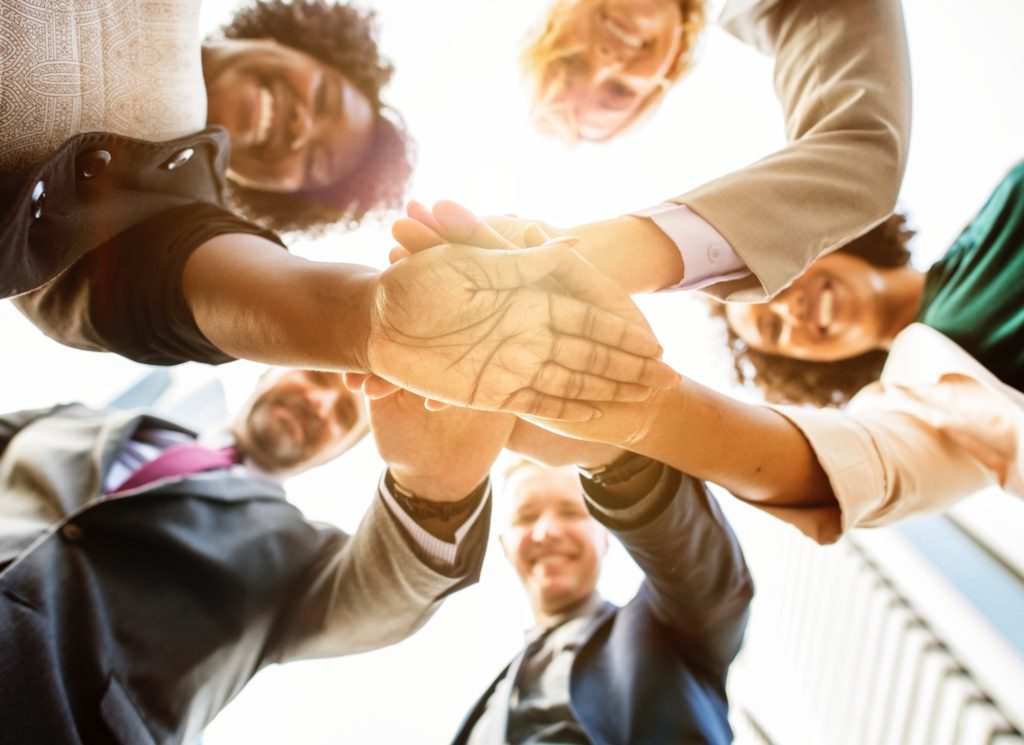 Women still have fewer rights and opportunities than men, but small actions can change this reality (Pexels)

In 2017, a study conducted by the World Economic Forum (WEF) found that women have only 68 percent of the rights, opportunities and access to resources enjoyed by the world’s men. Those differences and the speed of progress in reducing them, vary from country to country. But according to the WEF researchers, at our current pace, it will take 100 years to eradicate gender disparities.

It’s daunting, but the good news is that the world is more and more aware of the need to fight gender inequality, which in many places is connected to other types of discrimination such as racism, xenophobia, and homophobia. The benefits of equal rights are becoming evident. An International Labour Organization study showed that if, by 2025, the worldwide gender gap in the labor market shrank by 25 percent, one result would be a 204 million increase in the workforce, which would represent US$ 5.8 trillion in global GDP.

Eliminating the wage gap could also benefit the world economy in many other ways. A study published in 2017 by the Institute for Women’s Policy Research showed that bringing all U.S. women workers’ earnings to the same level as those of men in equivalent positions would boost that country’s  GDP by 2.8 percent.

Pushing for equal wages for the same positions at work and sharing household chores at home can help. We have created a series on building a fairer world in everyday life, from childhood to adolescence. In the third report of the series, check out what adults can do to advance gender equality. 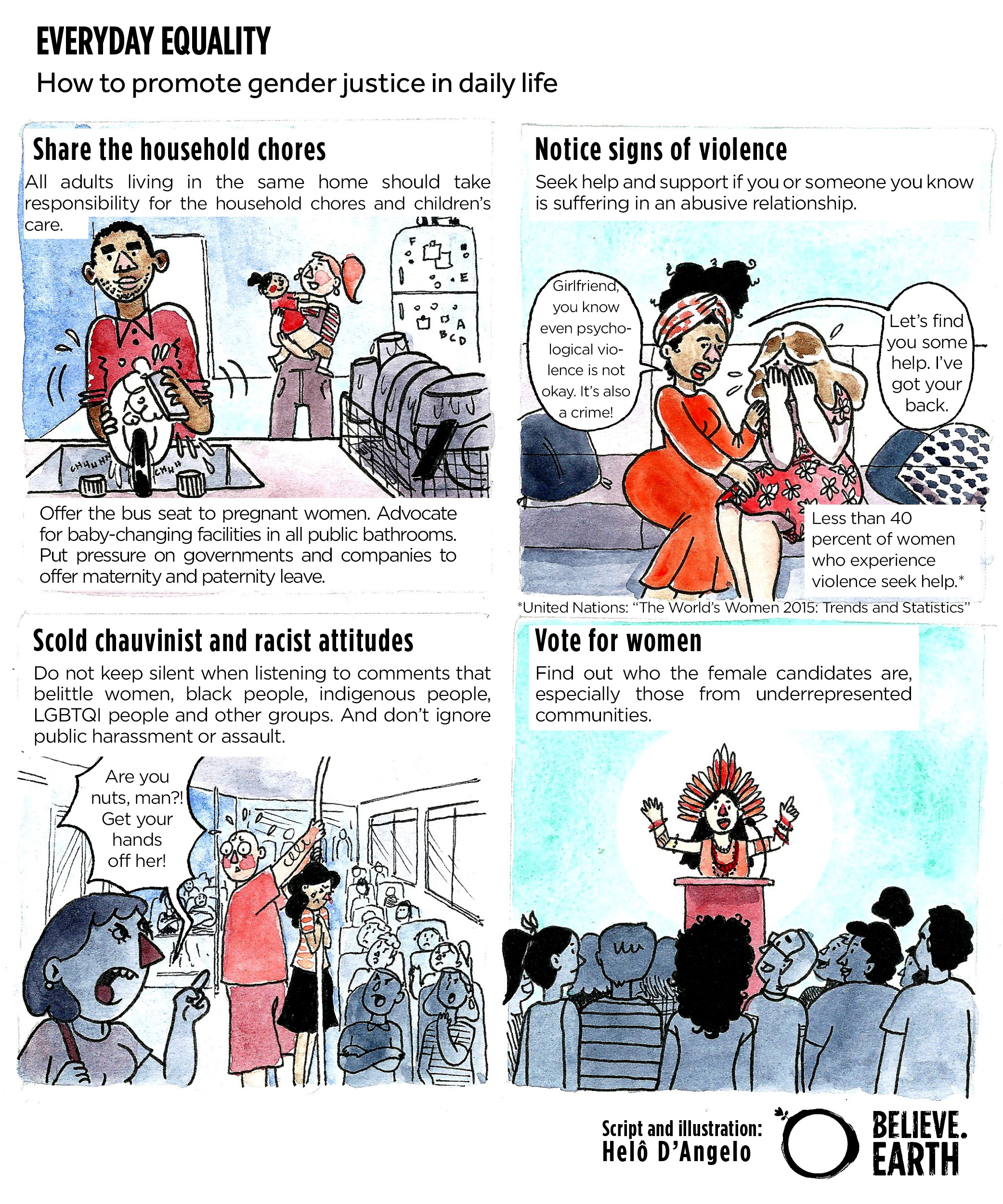 Household chores and children’s care are every adult’s responsibility. Ask yourself if there is an equal division of labor in your home. The work of caring for children is still done mainly by women in much of the world. A report released by the UN in 2015 points out that women from developing countries do over three hours more of daily unpaid work (household chores and childcare) than men, while in developed countries, they do, on average, two hours more.

According to studies, the overload of household chores can increase women’s chances of mental illnesses, besides depressing their productivity at work, consequently affecting their salaries.

WATCH FOR SIGNS OF DOMESTIC VIOLENCE
Get some help and support if you know a friend or acquaintance is suffering from domestic violence or other abuse. This type of violence is not restricted to physical aggression. Verbal attacks (curses and threats) and psychological abuse (controlling, manipulative and intimidating behavior) also affect women. Often, all these things occur together. If you experience domestic violence, be aware that you are not alone. Report it!

The same UN report quoted above points out that in most countries with data available, less than 40 percent of women who experience violence seek help of any kind. Among those who do, most seek out family and friends, and few use formal institutions and mechanisms, such as police and health services. Less than 10 percent of women went to the police after suffering violence.

SUPPORT MOTHERS AND PARENTS
Those responsible for children and teens need support in every society. Offering the bus seat to a pregnant woman, advocating the installation of children’s changing rooms in all bathrooms in shopping centers (not only in the women’s facilities) and asking that companies guarantee maternity and paternity leave are all necessary actions. The latest UN data, released in 2015, shows that only 53 percent of countries offer at least 14 weeks of maternity leave. Even worse, only 48 percent of countries offer any paternity leave.

REJECT CHAUVINIST AND RACIST ATTITUDES
Do not make comments that ridicule, demean or humiliate women, black people, indigenous people, members of the LGBTQI community or any other historically marginalized groups. And don’t keep quiet if you hear such comments. Talk to your colleagues, friends and family frankly and tell them to stop with the chauvinist, racist, homophobic and transphobic insults.

HELP WOMEN GAIN POWER
According to 2017 data from UN Women, only 17 countries have female heads of state and/or government. The overall average of women in legislative bodies is only 23.4 percent. Find out who the female candidates are, especially women from underrepresented communities.

In addition to politics, consider ways to support the promotion of women and LGBTQI in the arts, sciences, sports, and other fields.

LISTEN AND REFLECT
One of the main obstacles to eliminating prejudice is that people have difficulty recognizing that it really exists. Research has already proven that we all reproduce stereotypes and pre-existing notions on many topics, including gender and race. “The brain and behavioral sciences have learned a lot about our unconscious biases. W​e all have them, based on race, religion, sexual orientation and gender. The important thing is to be aware of our sexist assumptions and challenge them,” explains Lise Eliot, a neuroscience professor at the Chicago Medical School of Rosalind Franklin University of Medicine and Science.

So, try to pay attention to your assumptions and know that none of us is immune to making bigoted comments or holding biased attitudes. When someone points out something problematic in your speech, listen and reflect on it. 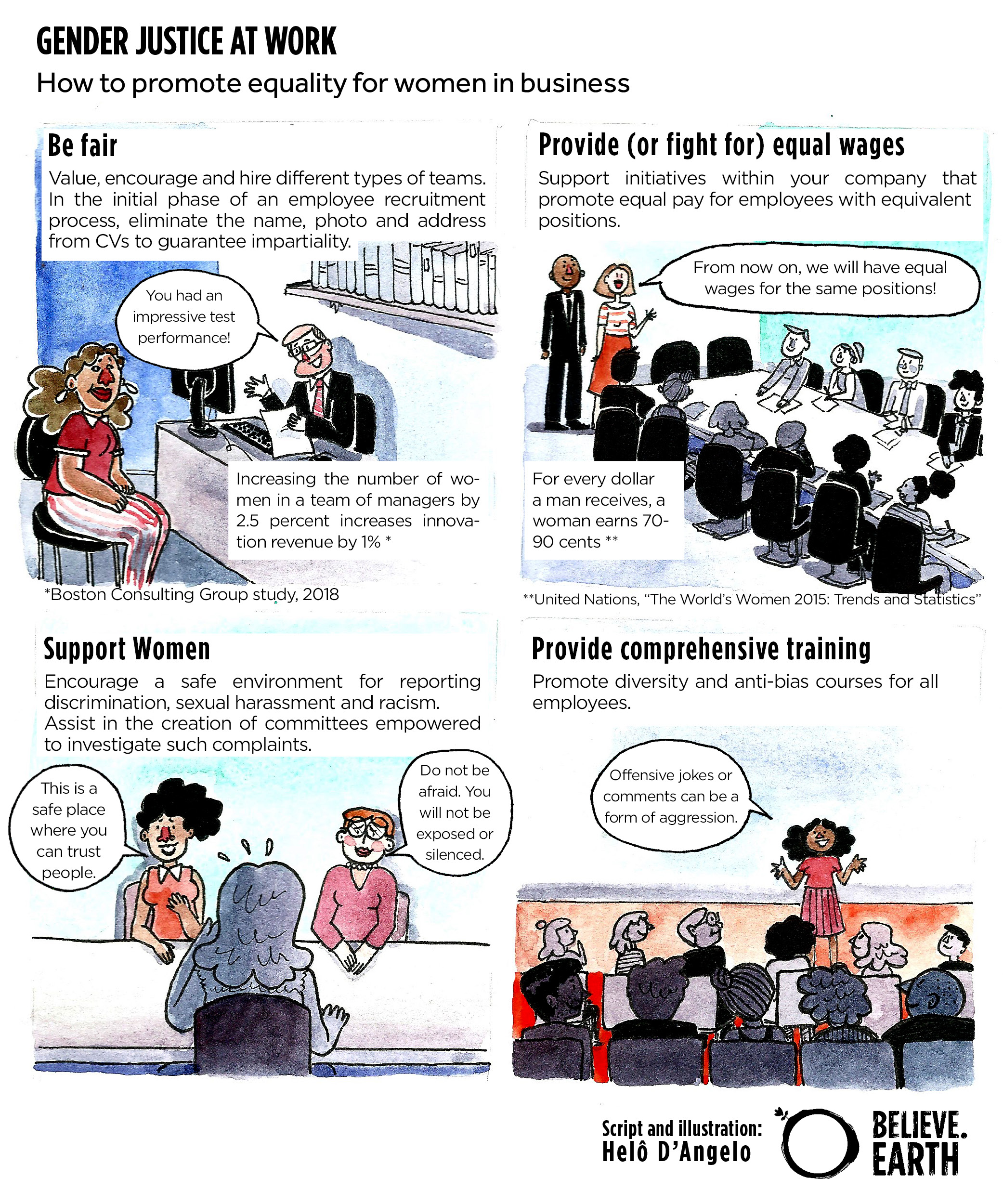 HIRE DIVERSITY
Value, stimulate and hire diverse teams. A study by the Boston Consulting Group and involving 1,700 companies from eight countries showed that the more diverse the workforce, the better the company’s performance on measures related to innovation. Even small changes yielded results. The survey indicated that an increase of only 2.5 percent of women in a team of managers can increase innovation revenues by 1 percent.

One way to increase the hiring of women and other underrepresented groups, according to April Reign, diversity consultant, is to remove names, photos and addresses from the resumes early in the selection process because, according toresearches, gender and race biases can affect what happens even before the interview. “That is a practice that is taken on in the States, a little bit, and it needs to happen much more. Because it shouldn’t matter who that person is if they are the right person for the job, but there are some implicit biases. If Janet Thompson submits the exact same resume as Mark Thompson, the studies, the evidence show that Mark is going to get the interview and not Janet even though they are the exact same resume,” explains Reign. “That is why if you remove the names and you wait until the person walks into the room, then you know that you are truly being equitable across the table.”

PAY (AND DEMAND) THE SAME SALARY FOR EQUAL WORK
For every dollar a man receives, women earns an average of 70-90 cents, according to UN data. Therefore, it is important to observe and support companies that pay the same salary, benefits and bonuses to employees with equivalent positions.

If this is not happening in your workplace, mobilize resources and contacts to request the publication of the employees’ salaries, or ask for an equal pay audit, as it has already happened in some companies in the United States, United Kingdom and other European countries.

SEXUAL HARASSMENT AND RACISM: ZERO TOLERANCE
Employees must have a safe channel to report bullying, sexual harassment and racism without being exposed or dismissed. Proven cases should be punished. In addition, April Reign explains that it is important to note “how people who are most vulnerable are represented” on the committee that investigates the allegations.

PROVIDE (OR REQUEST) ANTI-BIAS TRAINING
Racism and prejudice at work often affect people from historically marginalized groups in the form of “microaggressions.” This means, jokes and offensive comments made without harmful intent, but that hurt people, and generate stress.

One way to stop microaggressions is to offer training on diversity and implicit prejudice. But, as April Reign says, such trainings should include everyone. “When we talk about training, it has to start from the top down, not just the CEO or the board saying ‘okay we are going to pay for that,’ but they need to be in attendance as well,” she emphasizes.

To produce this report, April Reign, diversity consultant and creator of hashtag #OscarsSoWhite, and Lise Eliot, neuroscience teacher at Chicago Medical School, were consulted. To review this article and comics, we consulted: the lawyers from Alana Institute, Mayara Silva de Souza and Juliana Pereira, both activists for racial equity; the  journalist Juliana Gonçalves, coordinator of Black Women Parade in São Paulo; the professor Célia Regina Rossi, from Paulista State University, specialist in education and sexuality, coauthor of Sexuality and Sexual Education: educational policies, research and practices.