Despite their adversities, indigenous peoples continue to serve as a source of inspiration and resilience 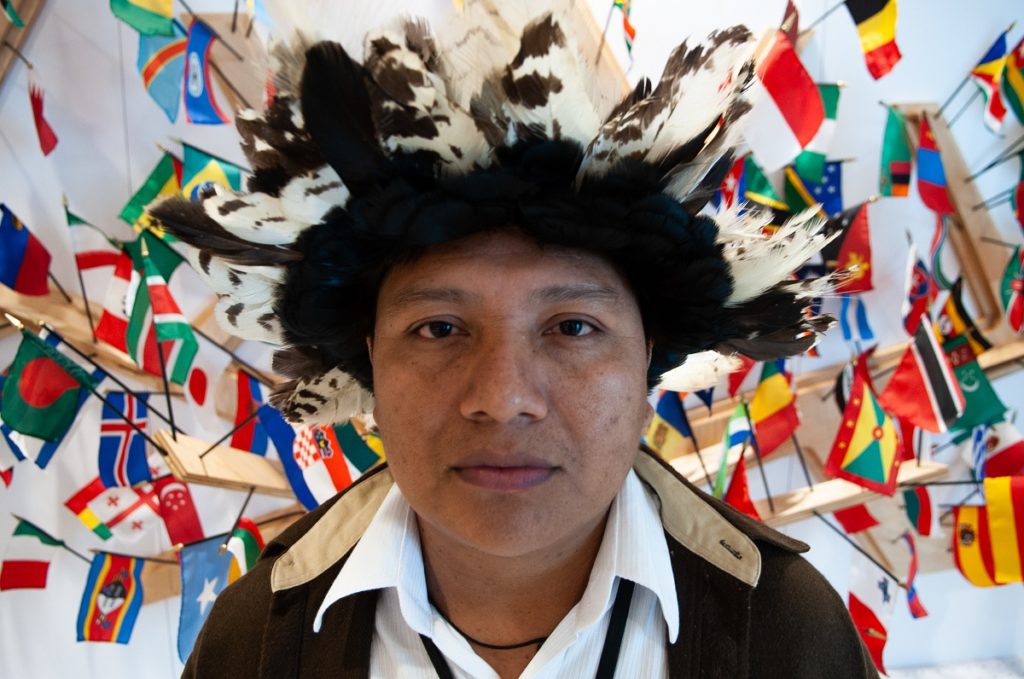 The challenges faced by Brazil’s indigenous peoples, both on the dirt ground of their villages and in the nation’s halls of power, have led to repeated denouncements domestically and abroad. The existence of 305 ethnicities, speaking 274 different languages, with a variety of ways of life and views of the universe, is one of Brazil’s biggest treasures. Yet they are still unknown to the majority of the country’s non-indigenous citizens.

If Brazil’s first peoples have something in common, even considering their great diversity, it is that they see themselves as an intrinsic part of nature – they “are nature.” There is no separation: the Earth is the mother and it is sacred. “We belong to it. It does not belong to us,” is a mantra often repeated. The nation’s various indigenous groups don’t have the intention or practice of trying to dominate nature. Quite the contrary, their mission is to protect it, to keep it alive, because “if something happens to the Earth, it happens to its children too.”

For this reason, they put themselves on the frontline to defend their sacred ancestral lands, its forests, rivers and other natural resources. The latest report published by the Conselho Indigenista Missionário (Indigenist Missionary Council – Cimi), titled “Violence against Indigenous Peoples in Brazil,” shows that the majority of indigenous territories continue to suffer from land grabs, logging and prospecting, and have faced an increase in threats, conflicts and violence, a loss of biodiversity, and a rise in childhood mortality, suicides and homicides.

One of the cases that best exemplifies the current plight of Brazil’s indigenous peoples is that of the Karipuna, who have inhabited the Amazon Rainforest for centuries. They currently live in the Panorama village, with a population of 58, about 115 miles from the city of Porto Velho, in the western part of the Amazon region.

The Karipuna were nearly wiped out after a traumatic contact with non-indigenous society in the 1970s, being reduced to only 4 survivors. Despite the official demarcation of the Karipuna Indigenous Territory two decades ago, they continue to receive threats. Their case is so grave that the state of Rondônia’s Public Prosecutor’s Office has classified it as genocide.

Their leader, Adriano Karipuna, 32, travelled to New York to take part in the United Nations’ Permanent Forum on Indigenous Issues and denounced the threats and abandonment faced by his people. “We protect the forest not just for indigenous people, but for everyone. We are taking care of this heritage. And we need you to be more responsible towards us, indigenous people,” he asks.

Today, the Karipuna symbolize the need to help native peoples’ fight for their rights and for a better future. In this brief interview, Adriano Karipuna shows how, despite facing many challenges, the future will be different if it is up to his people. 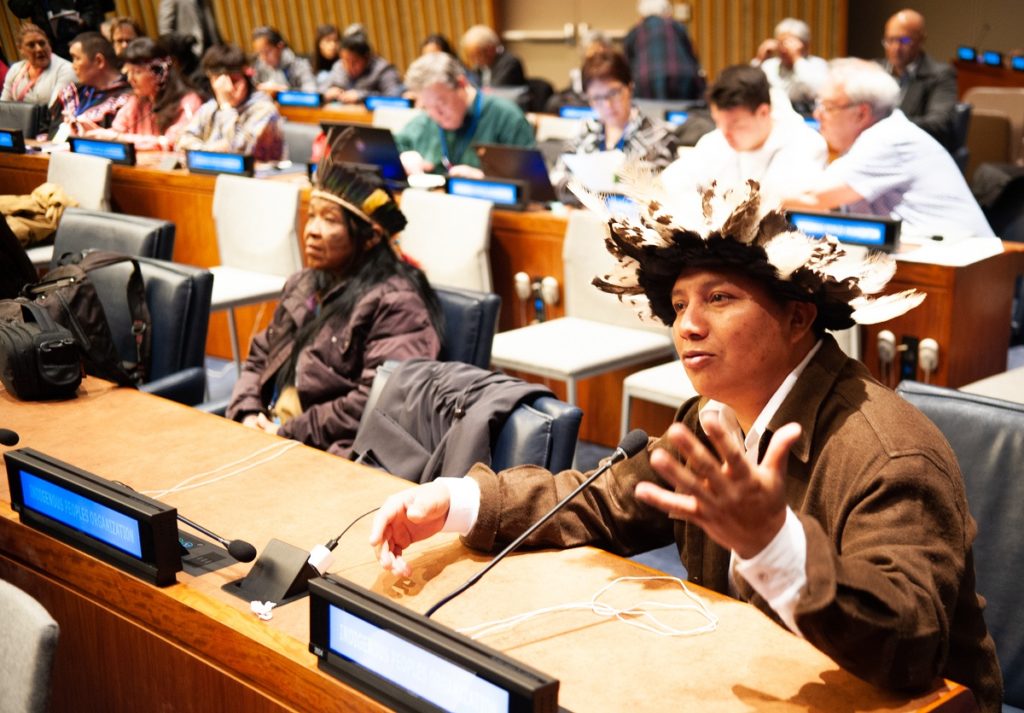 Greenpeace (GP) – Tell us a little about your people’s history, who were almost extinct.
Adriano Karipuna (AK) –
According to my mother, Katicá Karipuna, one of the four survivors, we used to be about 200. She says that around the 1970s we were reduced to only four people, since there were no vaccines to protect against flu, malaria and other diseases. Today we are still a small group, with 58 people. But this is the result of our strong resistance, because after contact with non-indigenous people, these four remaining Karipuna refused contact again, they went back into the forest. This is how they survived.

GP – But what happened?
AK – My uncle says they were poisoned. They said it was very bad, and it still is today. They killed our relatives, they killed the entire village. Only one village escaped, which was more distant. I stopped asking my mother and uncles about this. They get very emotional, with tears in their eyes. It’s sad. The Brazilian government owes the Karipuna a lot. They built the Madeira-Mamoré railway, then came the rubber boom, the gold boom, the construction of the Santo Antônio and Jirau hydroelectric plants… All of this led to our social and cultural death. The death of our rivers, our fish…

GP – What are the threats the Karipuna currently face in their territory?
AK – It has gotten a lot worse since 2015. They are stealing timber and grabbing our land, selling our land because they say it has no owner. There are also gold miners in the Karipuna Indigenous Territory. We don’t know how many areas have been invaded because it can be dangerous for us to walk around our own territory. We are at a disadvantage. We don’t walk by the highway anymore, only along the river, but even then it’s still dangerous. We want the State to remove the trespassers, loggers and miners from our land. We need the land to be able to plant and live, to drink the river’s water, to eat the fish. 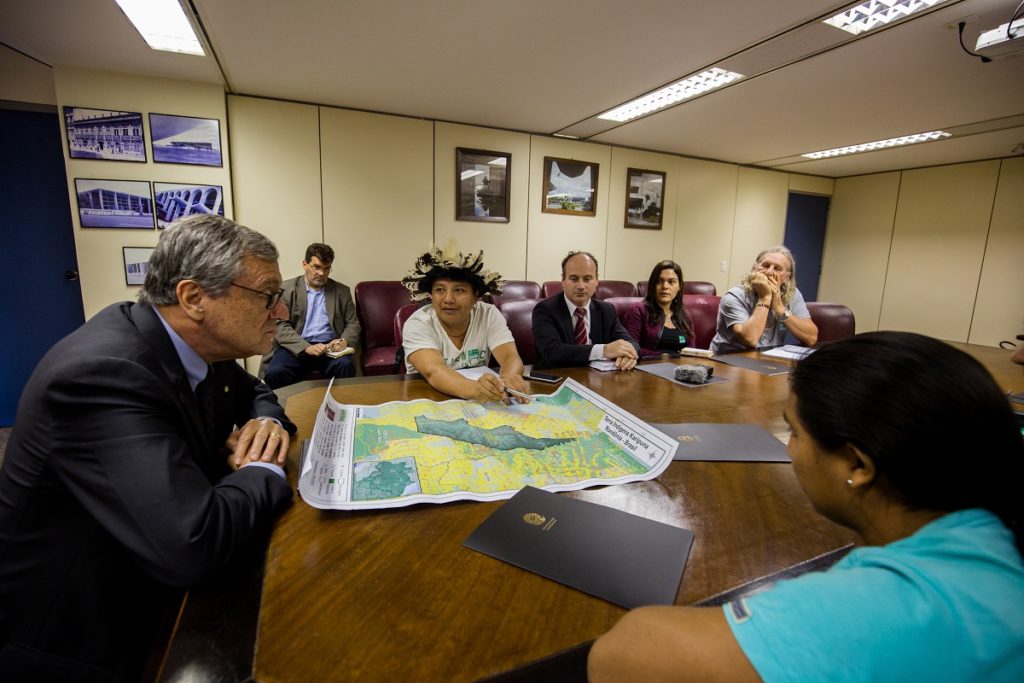 Adriano and André Karipuna denounce the invasions, logging and land grabs by trespassers in the Karipuna Indigenous Territory to Secretary of Justice Torquato Neto, in Brasília (Tiago Miotto/Cimi)

GP – What is life in the village like today?
AK – In the village we live off small-scale agriculture. There is manioc for consumption and sale. There is flour, sugar cane, açaí, pumpkin. We gather Brazil nut, fish, hunt. Today, 16 people speak the Tupi-Kawahiba language. We have a teacher for it. We make art. The elders teach the younger ones some of the rituals and songs. We Karipuna continue living a good life. We want to live in harmony, be able to plant more, sell more to have more income, so the whole community can live well, without bothering anyone else’s life. We don’t steal from anyone, we don’t invade anyone else’s land. We want to live in peace in our forest.

GP – What is the goal of your trip to the UN this week?

AK –  We are afraid of a genocide, because they are after our land. The Brazilian government must remove these invaders and protect our territory and our people. This is the role of the state. And the world must pay attention to the Karipuna people. We protect the forest not just for indigenous people, but for everyone. We are taking care of this heritage. And we need you to be more responsible towards us, indigenous people. We are crying out for help and assistance in protecting our territory, this piece of the Amazon.

GP – Considering this difficult context, what do you intend to do?
AK – We are still few, but we will not give up. Nobody stops protecting their Mother. We will give our lives for it, if necessary.