A business model that generates profit for everybody 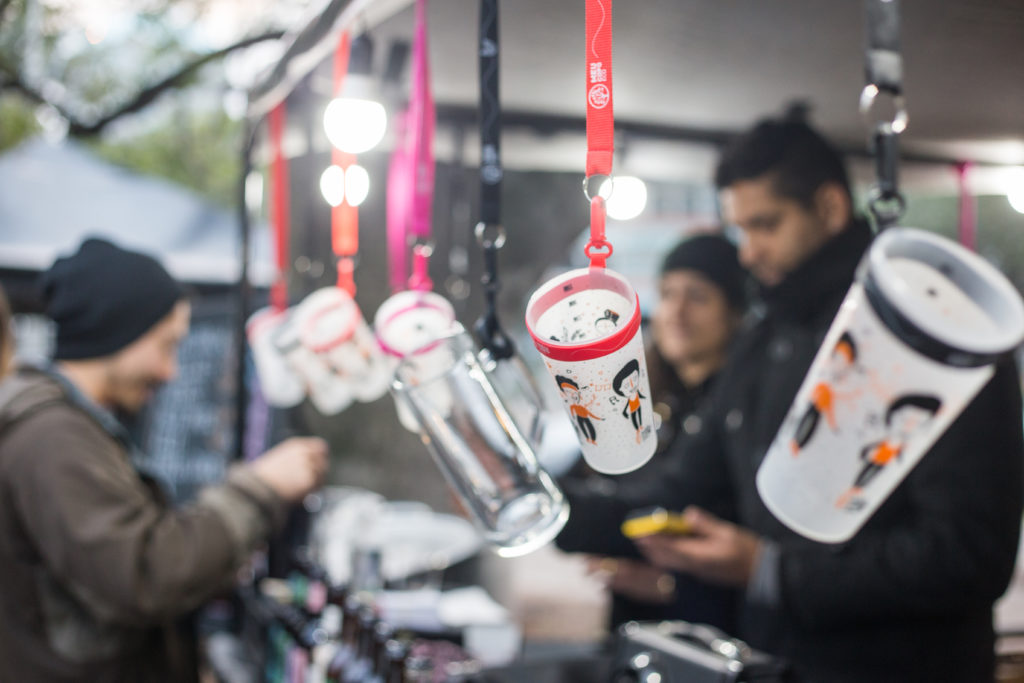 Reusable plastic cups for beer are sold at an event in Porto Alegre to avoid the use of disposables (Laura Barros/ Believe.Earth)

When entrepreneurs Arthur dos Reis and João Martins opened Josephyna’s Café in Porto Alegre in 2016, they were hoping to avoid using disposable plastic at their establishment. But it was not easy to find alternative packaging suppliers in Porto Alegre. “Now we use biodegradable cups that are made in São Paulo, but we only offer them to those who order to go,” says dos Reis. “For those who drink here, we have mugs and cups made of glass.”

The lids of the to-go cups are also made of plastic, as there is no other suitable material on the market. “So, we ask our customers to be conscious about their use,” says dos Reis. “We also teach customers how to correctly dispose of them.”

Recently, dos Reis and Martins also quit offering plastic straws at Josephyna’s. The most sustainable substitute on the market is made of paper and costs 15 times more. “We used to buy 3,000 straws and pay R$ 80,00 (US$ 20),” says João. “Now, we pay R$ 800,00 (US$ 200) for only 2,000 units.” To discourage consumption, they only offer the paper straws if customers ask for them. Now, Josephyna’s owners are thinking about offering discounts for those engaged in environmental activism, as well as to those who bring their own cups from home.

“When you want to get people involved with new ideas, you need to change corporate culture,” says Daniela Horta, a professor at Uniritter and coordinator of the innovation hub Mosaico, in Porto Alegre. “Changing attitudes within a company has ripple effects on the outside world. When we say we want to create social value, we mean building and looking at things in a different way.”

Nilo Barcelos, who teaches at the Federal Institute of Rio Grande do Sul (IFRS) and is a member of its Research Group on Sustainability and Innovation, says companies can benefit from taking their social role seriously. “Adopting sustainable policies, even if it will mean reducing profit at first, can help advertise your company,” he emphasizes. “As more companies adopt good practices, there will be a change in the growth curve. As we lower the costs of sustainability, we will better understand its advantages.” 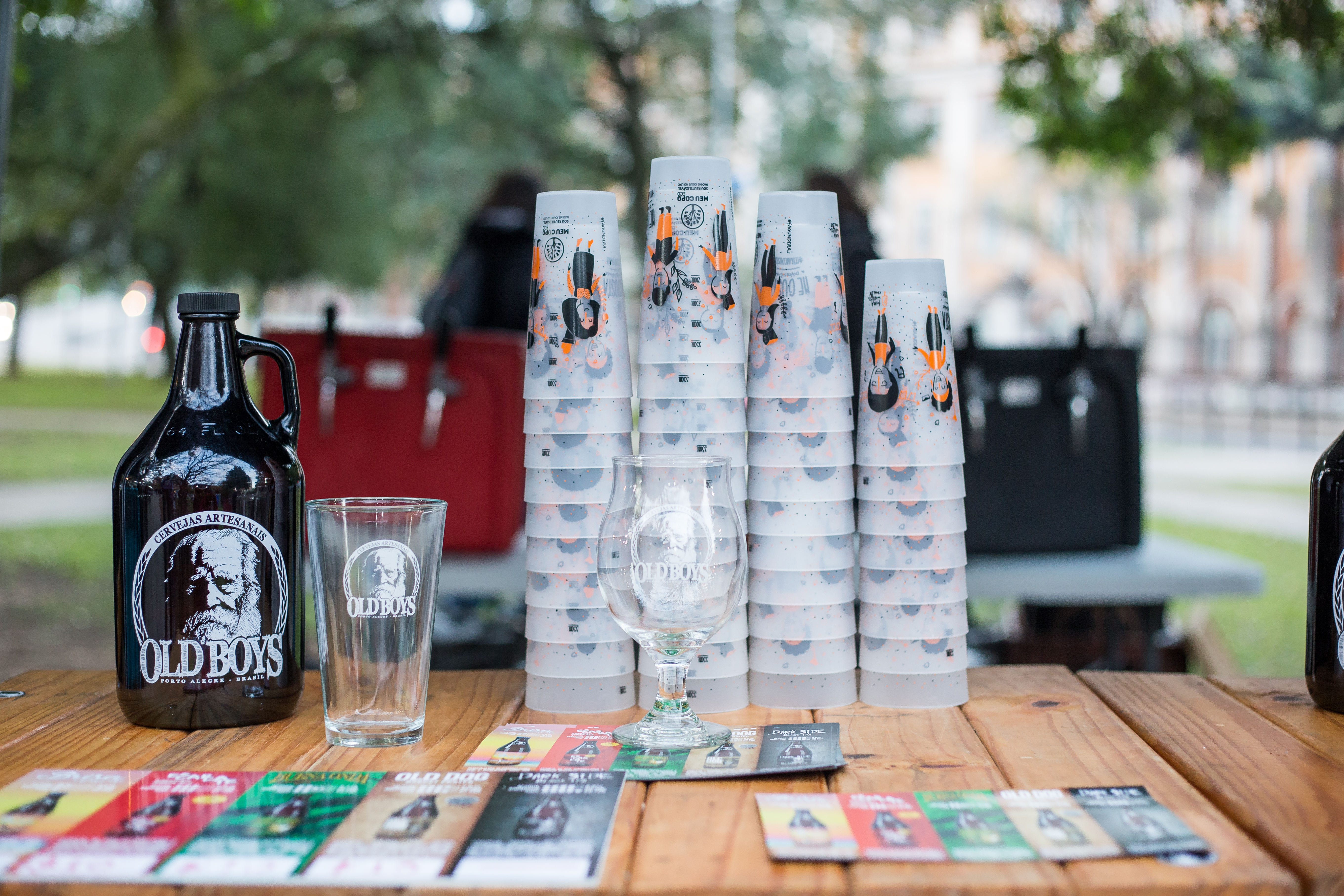 Entrepreneurs hoping to do right by the planet are beginning to get some support from municipal law. In the city of Rio de Janeiro, the fight against plastic straws gained power with a law imposing fines for bars, restaurants and street vendors offering or using them. The city of Cotia, in the state of São Paulo, has restricted the use of straws to biodegradable or recyclable ones.

The city of Santa Maria, in Rio Grande do Sul, is the first city in that state to ban the use of disposable straws in bars, restaurants or hotels. The law was enacted in September and local businesses will have 180 days to adjust to it. Under Santa Maria’s new law, the establishments in question can only use biodegradable paper straws and these must be hermetically packed with biodegradable material, under penalty of fines. “Soon, we’ll file a request at the City Hall for the conclusion of the project, including the banning of disposable cups, and of plastic packaging for cutlery and toothpicks, as well as other materials. We’ll also ask for laws outlining the correct disposal of these discards,” says João Carlos Provensi, president of the Union of Hotels, Restaurants, Bars and Similar Establishments in Santa Maria (SHRBS), noting that the city already regulates the proper disposal of frying oil. 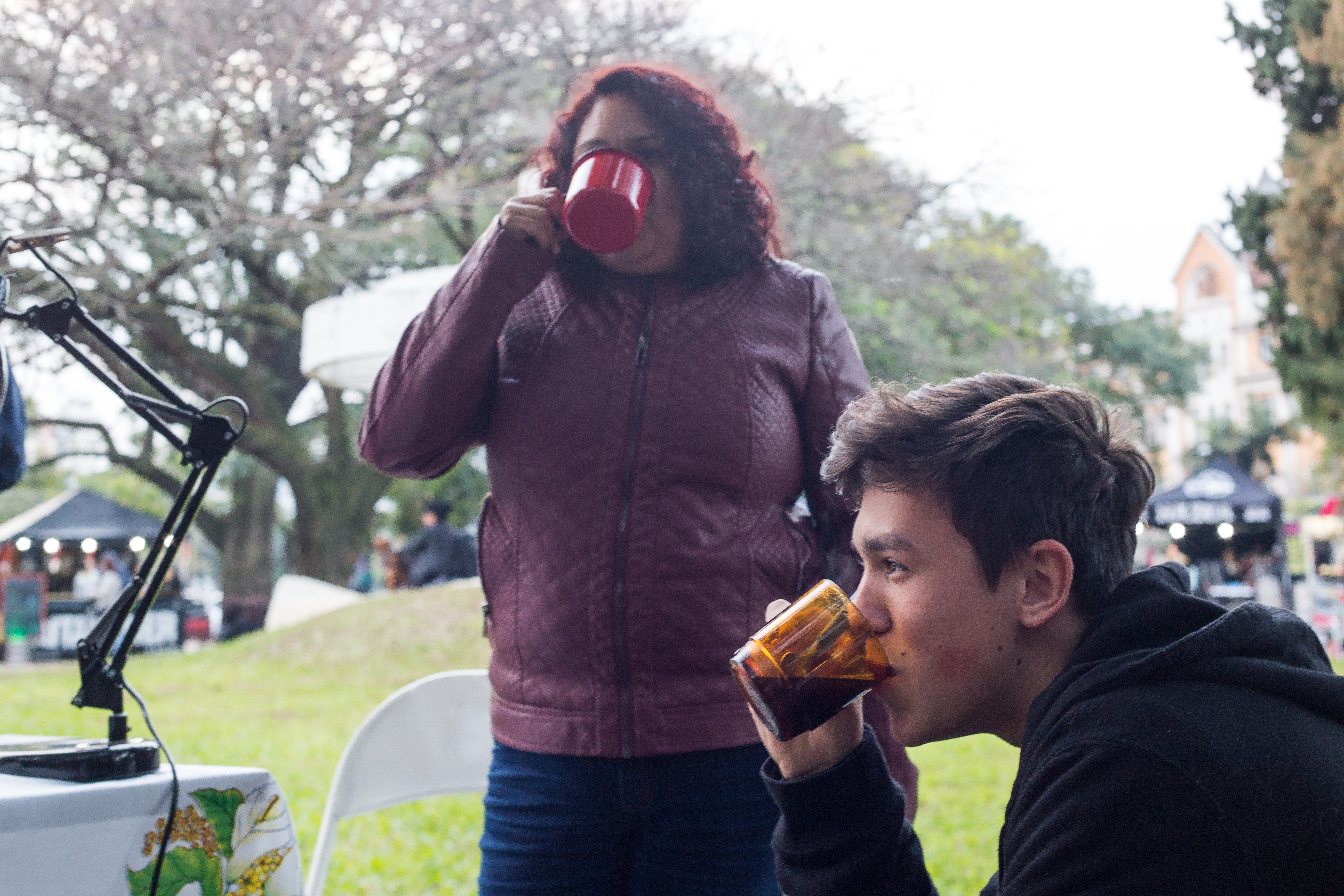 Me Gusta’s attendees bring cups and mugs from home to avoid the use of plastic containers (Laura Barros/Believe.Earth)

Even without such legislative support in Porto Alegre, Arthur dos Reis and João Martins of Josephyna’s Café are not fighting their battle against plastic waste alone. At the Me Gusta cultural street fair, monthly since 2014, attendees are often seen with glass cups or mugs brought from home. At the fair, it is also possible to buy your own returnable mugs for R$ 5,00 each (US$ 1.25) – of this amount, R$ 4 covers the cost of production, while R$ 1 is donated to the event – or you can rent them.

Pamela Morrison, the creator of the cultural fair, says the adoption of returnable containers has reduced waste at the event. Most participants have embraced the practice. Student Amanda Dietrich, 22, is one enthusiast. “The returnable cup lasts longer, can be taken home and brought back, and, it’s good for the environment,” she says.

Leonardo Fusari, 23, a bartender, has chosen to rent his cup. “I already have some of them at home,” he says. “And, it’s clear to me that since I won’t remember to bring it next time, it’s better to give it back at the end of the event.”