A home for those who live on the streets

More than a shelter, a village built to house formerly homeless people allows them to choose a different life 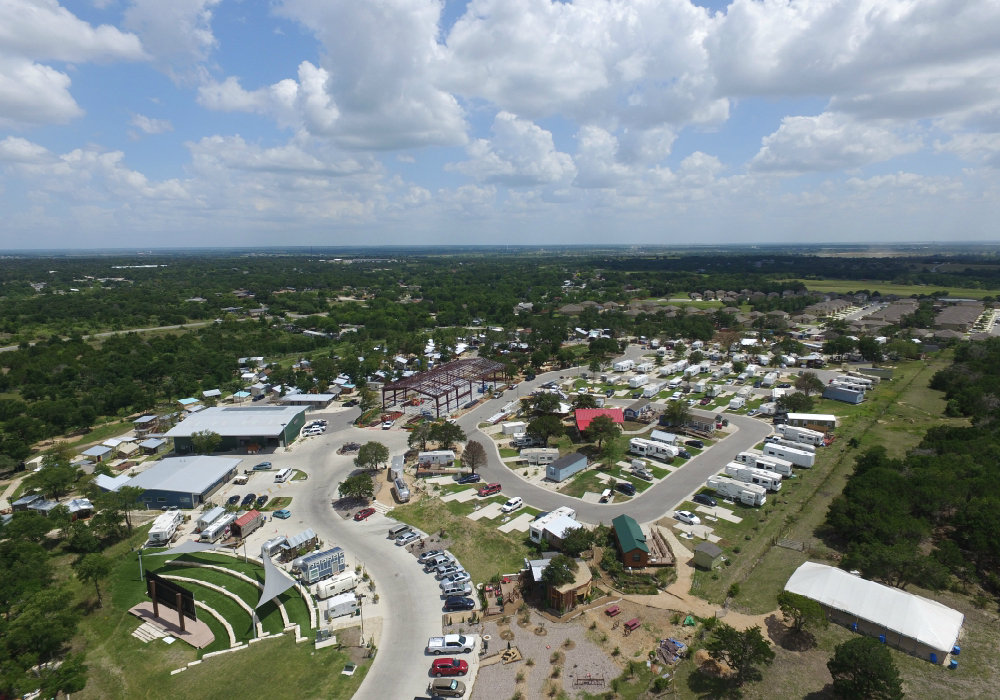 Providing a shelter to those who do not have one is the ideal that moves Alan Graham, one of the founders of Community First! Village, in Austin, the capital of Texas. The village houses formerly homeless people in 140 micro-homes (that is, houses of 16-18 square meters) and 100 motorhomes (vehicles equipped with a kitchen, a bathroom, a bedroom and a living room).

The idea of creating the community grew out of the experience of the NGO Mobile Loaves & Fishes (MLF), which Graham founded in 1998 to distribute meals on food trucks to people living on the street. “I used to do volunteer work before that, but I did it for the wrong reasons,” he says. “It was to help my career or to network.” Even so, he always had a sense of the collective, born in childhood travels with his parents in the family’s motorhome. “There were many families who did not know each other but were sharing the same space,” he says, describing the campgrounds where they stayed during these family trips.

Community First! Village is more than a shelter. It’s a compound encompassing an area of 11 hectares (110,000 square meters, or a little over 27 acres) which includes kitchens, laundries and public bathrooms (because the micro-homes have no plumbing). In addition to these amenities that make Community First! Village a home, there are others that build community and foster quality of life: a cinema, a chapel, a community vegetable garden, a graveyard, a locksmith shop, a clinic, a convenience store and a library. The streets have names like Peaceful Path and Goodness Way.

Almost 100 volunteers work daily cleaning, gardening and providing maintenance for this small town, which is a little over eight and a half miles from downtown Austin. Community First! Village does not get help from the government. Due to the high costs of maintaining the initiative, about US$4 million dollars a year, the NGO is always coming up with ways to encourage more people to get involved with the cause and be part of the team, or contribute money. To that end, they organize events open to the community beyond the Village, such as free movies and product sales fairs. Alan Graham and the watchword of the NGO: Goodness (Photo: MLF Archive)

Ever since he first bought a second-hand motorhome to take a homeless man off the streets in 2005, Graham has held fast to his dream of solidarity. He invested his own money and received donations to get another 50 units to house 115 people. In the beginning, the motorhomes lay side by side in parking spaces. In 2012, the NGO had an opportunity to buy an empty lot for US$350,000. Three years later, Community First! Village opened its doors.

Austin and its surrounding Travis County have 2,036 homeless people, according to the January survey by the Department of Housing and Urban Development of the United States (HUD). The state of Texas, with 23,122 people without homes, according to the Annual Homeless Assessment Report (AHAR) of 2016, accounts for 4 percent of the U.S. homeless population.

FROM THE STREETS TO THE VILLAGE

Before moving to the Community First! Village, the person interested must visit and get to know the types of houses available. “One of our friends wanted a model that would not be ready for four months,” says Graham. “He preferred to return to the street and wait. We did not try to make up his mind for him, or force him to accept the model available. The power of choice is gratifying for those people who never thought they could possibly have choices.”

The homes are not free, but prices remain well below the market. If you want to rent a small apartment in Austin, you will not be able to do so for less than US$1,025 a month. In Community First! Village, a micro-home furnished for one person costs from US$225 per month. If you choose a motorhome, which can house couples and families in a 26-square meter space, it costs US$500 dollars a month,  including water, electricity, and the use of Village services and facilities. 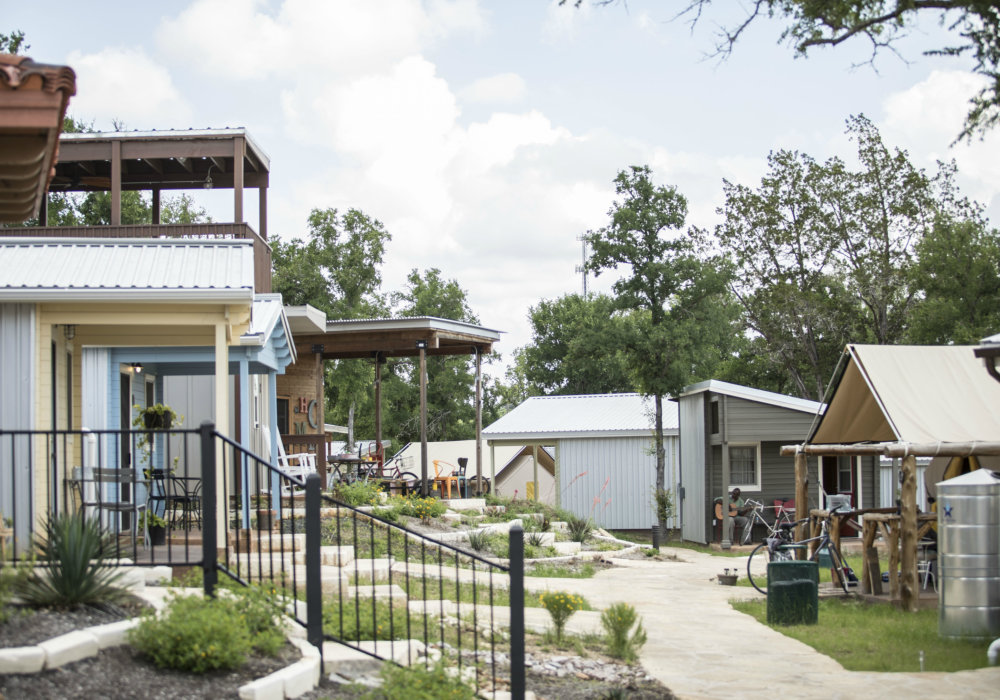 The area where the small houses are located (Photo: MLF Archive) 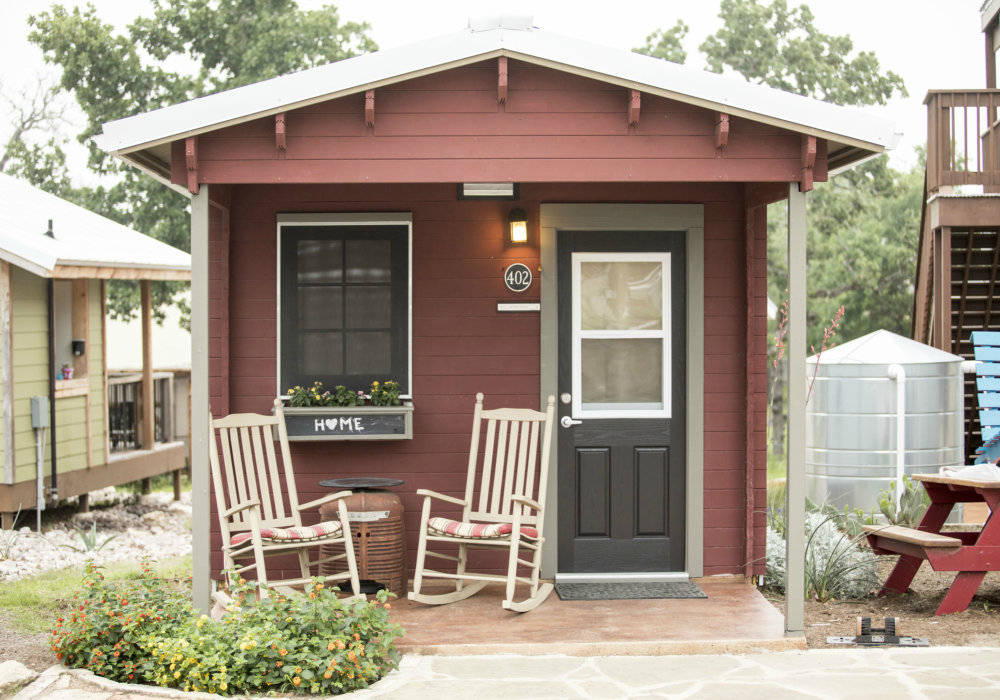 The entrance of one of the small houses designed by the American Institute of Architects (AIA) (Photo: MLF Archive) 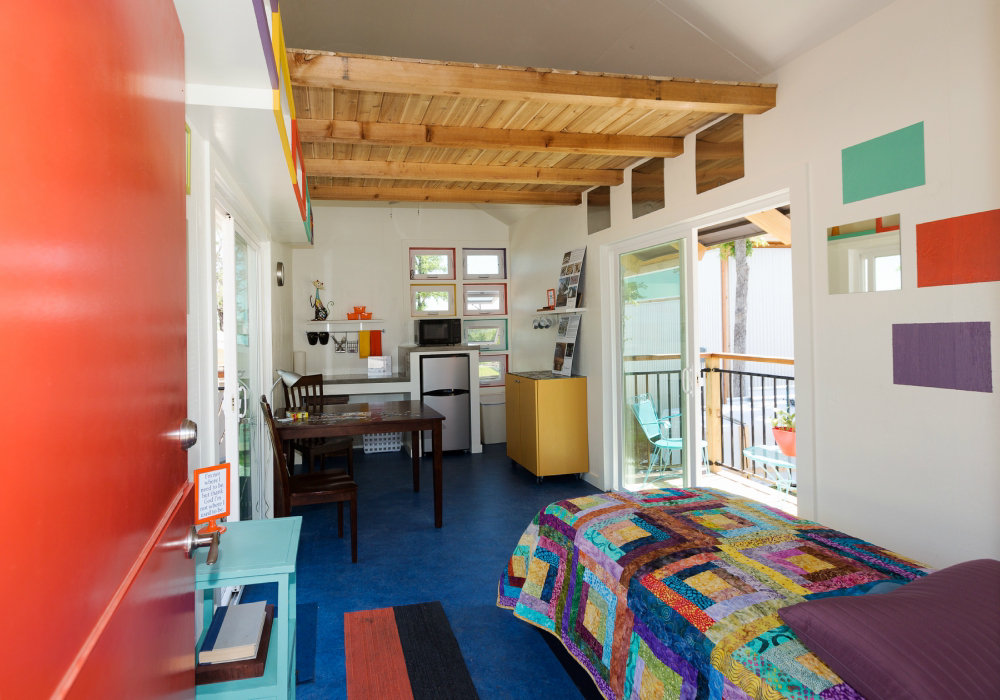 The interior of a small house (Photo: MLF Archive) 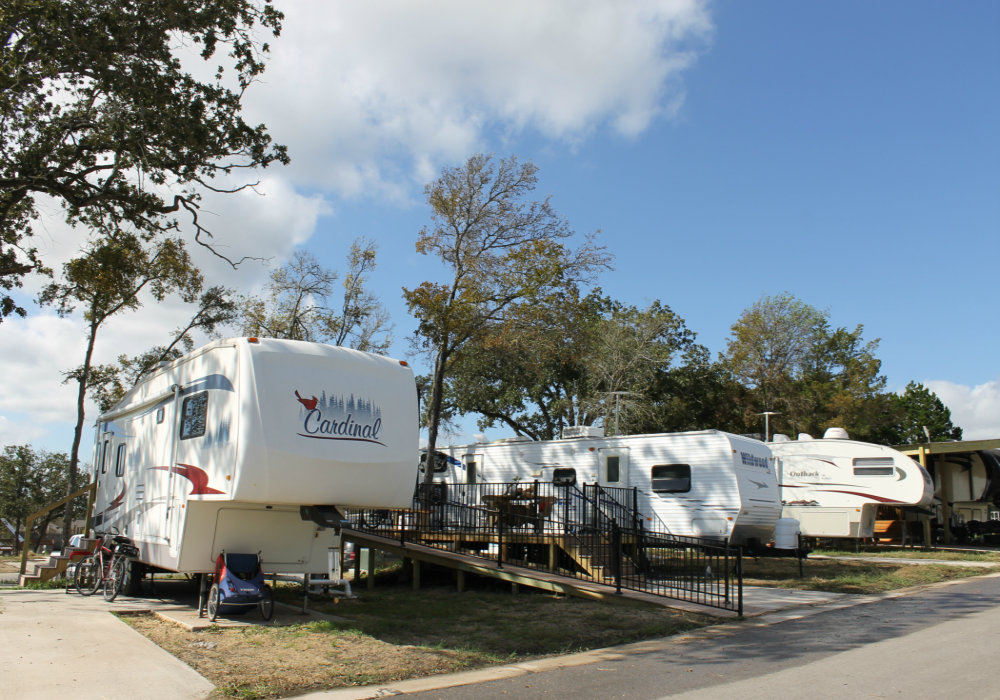 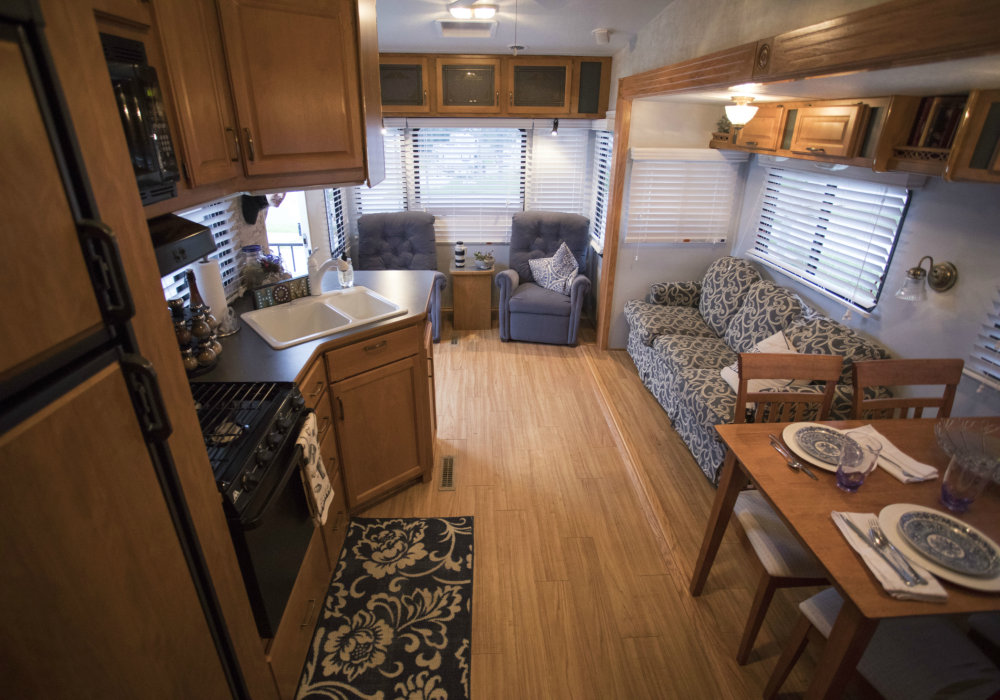 The interior of a motorhome (Photo: MLF Archive)

The selection of the residents is done in partnership with the NGO Echo (Ending Community Homelessness Coalition) and the application process can last months. A Community First! Village resident must be what the federal government calls a “chronically homeless” person. This person should present disabling conditions and have lived on the streets (or someplace else that is considered uninhabitable) continuously for one year or more, or have experienced several episodes of homelessness over the past three years. The second criterion for residency is to have some proven source of income, which can be disability, retirement, family, church and other institutional subsidies, or Social Security.

In some cases, if the applicant is accepted, and the resident can’t afford the security deposit and registration fee, donations received by Community First! Village cover the first few months until the resident is able to settle down and start working.

There are rules. Residents must pay the rent on time, obey civil laws and village community standards, such as maintaining the cleanliness of the surroundings. In Community First! Village’s two years of operation, twelve people have already had to leave the village for not meeting these standards. Some had no money for rent because they spent their money on drugs. “When you live in a space of this size, everyone comes to know who is using drugs, mainly because we care about each other,” says Graham. “From the 180 residents, there may be ten drug users.”

The use of drugs alone is no reason for eviction from the village, but rather, failing to pay rent, or the abusive behavior that can result from addiction (causing disruption for other residents or bringing drug dealers to the area). All residents are cared for by doctors, nurses, and social workers from partner organizations. 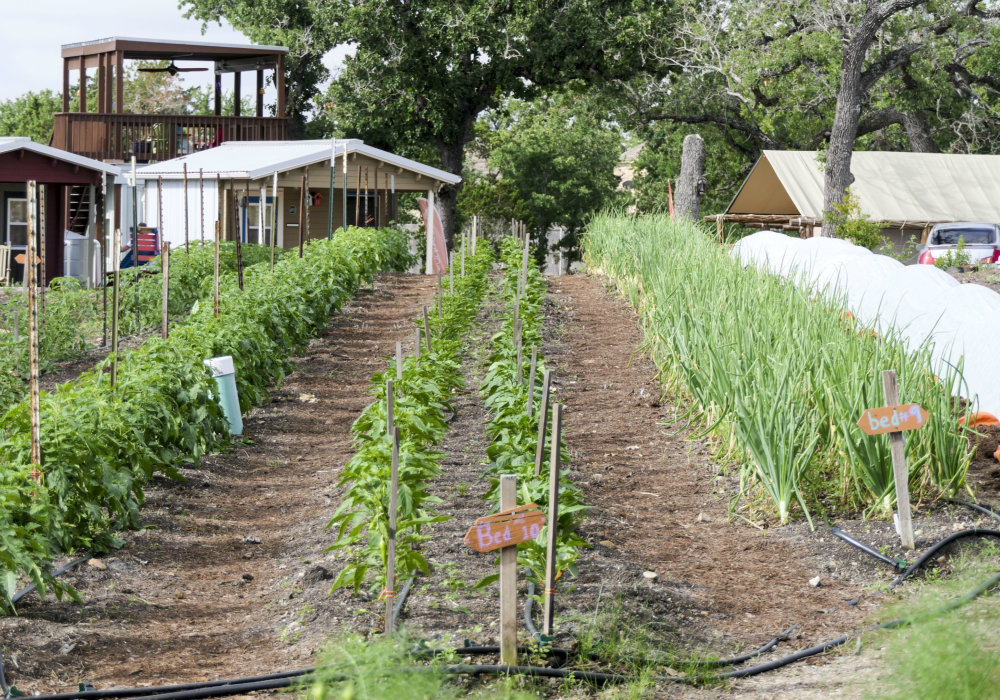 Food from the community garden is distributed free of charge to residents on weekends (Photo: MLF Archive) 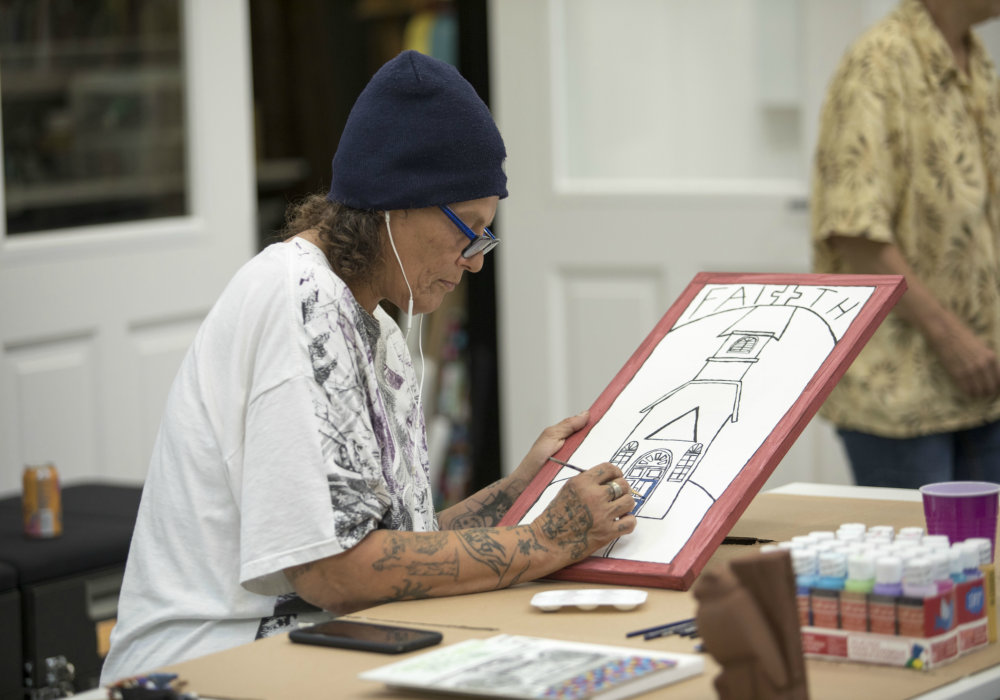 The NGO organizes workshops in the community (Photo: MLF Archive)

The NGO organizes workshops in the community (Photo: MLF Archive)

One of the ways the NGO generates income for residents is by holding workshops on locksmith services, painting, sculpture and ceramics. What they produce is sold in the convenience store. Another way is to pay the residents for work; they are responsible for cultivating and harvesting food from the community garden, supervising collective spaces and ensuring the cleanliness and organization of everyone’s living place. Robin Draper, 46, moved in September with her 7-year-old daughter, Avery, into one of the park homes. She administers this compensation process.

Draper was addicted to drugs and alcohol during her three years living on the streets of Austin. Today, she uses her experience to welcome new residents. “It takes a while to adapt to the village, because it is very different from the streets,” she says. “I had to deal with the same problems as many of the new members, so they identify with me and we make friends easily.” Robin Draper, one of the residents benefited by the community (Renata Borges/Believe Earth)

THE RIGHT REASONS
Alan Graham may have started volunteering for the wrong reasons, as he says. But he has certainly changed course. In his book, Welcome Homeless, released earlier this year, he tells his story and that of some homeless people who shaped his life. Like Houston Flake, who died in 2002.

“We were five guys from a rich area of the city and we thought we would go out and feed homeless people,” he says. “We had no idea what we were doing until Houston joined us. He was our eyes and ears on the streets.” Houston helped to shape the MLF food truck operation, which still exists: today volunteers deliver nearly 1,200 meals a day through 12 food trucks in Austin. Currently, forty-five employees help MLF to continue. Four of them are members of the Graham family. Last March, Alan and his wife, Tricia, sold the house where they had lived for 33 years and raised five children, and moved to one of the homes in Community First! Village.

“Neighbors respect our space, but some of them have come to our house at night when they needed to,” says Tricia Graham, who has been part of the NGO since its inception. “They have not had those people in their lives who they could count on at any time. For so long.”

“Our work goes way beyond building a roof, giving a bed or delivering a meal”, says Alan. “Housing alone will never solve homelessness, but community will.”