Leandro Abrantes: A Recycling Revolution in the Slums

The founder of Favela+Limpa exchanges trash for money, educating and generating income for a poor community in Rio de Janeiro 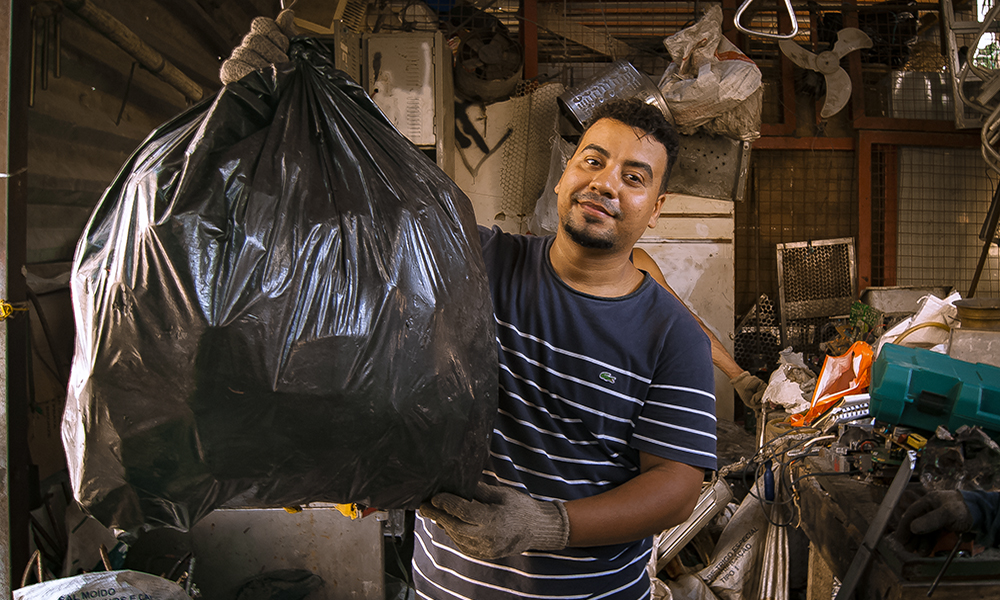 It was an ordinary day in 2012 in  Cantagalo/Pavão-Pavãozinho, a set of slums located in the South Zone of Rio de Janeiro. Leandro Neres Abrantes was at a bar watching TV, when he saw a report showing that his community was considered the dirtiest in Rio de Janeiro. In fact, waste had taken over every corner, in a huge contrast with the beauty of the horizon flanked by the beaches of Copacabana, Arpoador and Ipanema.

Abrantes, 35, understood his life’s mission at that moment: To make the neighborhood a cleaner, more conscious and sustainable place through the selective collection and recycling of waste. “This place was full of stones, bushes, trash and feces,” he says. That’s why he started Favela+Limpa HQ, a project that encourages residents to properly dispose of obsolete materials, especially appliances, metals and used cooking oil, while making money.

“In the beginning, I used to give the residents cleaning supplies in exchange for the waste,” says Abrantes. “But there were lots of complaints. People told me that they needed to eat, not to clean. So, I started to buy the waste according to the weight and that got people’s attention. Nowadays, several homes are supported by the recycling income.”

The 90 square meters of the two-story warehouse, with its cement floor and makeshift coating, are already cluttered with junk. Apocalypse and Genesis, Abrantes’ cats, wander winding among old pots and cans. Besides being pets, they chase rodents that intend to live among the refuse.

The materials left by residents are dismantled, separated, grouped or pressed for resale per kilo. The creator of Favela+Limpa (Cleaner Favela) estimates that the project is responsible for collecting 110 tons of waste per year from the neighborhood, and he expects that to quadruple when he gets a new processing machine in October.

Abrantes makes his living through recycling. He works with an apprentice and three employees, for whom he provides food and a place to live. The four employees are former homeless people. They have already gone back to school and are making career plans for the future.

Hunger, life without a roof and unemployment also marked Abrantes’ past. But he has been fueled by the faith that another reality is possible. “Someone has to do the ‘dirty’ job,” he says. “If you don’t do it, there will never be a clean one.” His ideals now bring income to his community, but convincing people  hasn’t always been easy.

THE POWER OF A MODEL

“Do you think you’re going to change the world?” Abrantes heard one day when he was collecting recyclable waste in front of a bar in his community. Instead of answering the provocation, he picked up the cans of beer and soda thrown on the street, threw the plastic bag on his back and left.

Soon after, the bar owner offered him a wheelbarrow so that Abrantes would no longer have to carry so much weight on his back. “I refused,” he recalls. “But I told him that his offer was really great, simply because it showed that he had changed his mind. Changing a person’s perception is very difficult, even more so if the person is nearly 50 years old. I had almost given up, but that situation made me realize that people were becoming aware.” The project was born and continues with no government support. Together with Nivaldo Cavalcante, a resident of the neighborhood who now handles the collection of used cooking oil, Abrantes has organized groups to clean the alleys and talk to families from the area, which includes more than 10,000 people divided into 3,200 residences according to data from the Brazilian Institute of Geography and Statistics (IBGE). “The effort does not work without community engagement,” he adds.

In the early years of the project, Abrantes did not know whether the initiative was working. Certainty on this point came abruptly, when he paused his activities due to the lack of space to accommodate the recyclables. “Suddenly, the amount of waste started to grow in front of our place. It reached the corner and then blocked the street,” he says. “Not even the city’s collection truck was able to get onto our street.” Those discards, once made anywhere, had taken the correct course: Favela+Limpa.

Abrantes still needs to raise awareness, since not everyone adheres to selective collection. “Doing the right thing is not easy, but we must try,” he says, adding that waste, if poorly handled, brings problems. “Where do the diseases come from? Waste. You can step on a piece of metal and get tetanus. If you abandon a tire on the street, it can fill with water from the rain and  attract the Dengue mosquito,” he says. “Everybody produces waste, but not everyone takes care of his own. We have tried to prove that the correct destination of these materials has more than a financial gain, as waste, if left untreated, will wipe us out.” The items are dismantled, separated, grouped and pressed for resale per kilo to recycling centers (Marina Lang/Believe.Earth)

The average quantity of solid waste produced per inhabitant in Brazil is 387 kilos (853.18 pounds) per year and only 58 percent of that garbage is treated correctly, according to an analysis released by the Brazilian Association of Public Cleaning and Special Waste Companies last year. The study concluded that the amount of waste generated in Brazil is similar to that of developed countries, but the fate of that refuse is closer to that observed in poor countries.

This problem belongs not only to the slums of Rio de Janeiro; it is  a nationwide problem.  In a report was published in March of this year, the National Secretariat of Environmental Sanitation indicates that in 2015, only 2.3 percent of the 62.5 million tons of waste produced in Brazil was sorted and separated for recycling.

The work in the favelas emphasizes that the revolution can happen, even without the government’s help. “My focus here is not only on recycling,” says Abrantes. “I want to show how I achieved the change, even with all the difficulties of the community and the whole culture turned against it.” It is a paradigm break, he adds. “I accepted the challenge and I want more. Now, my dream is to go beyond my borders and show that we’re able to change.”