Creating new clothes from industry discards, the stylist is becoming a model of upcycling in Brazil 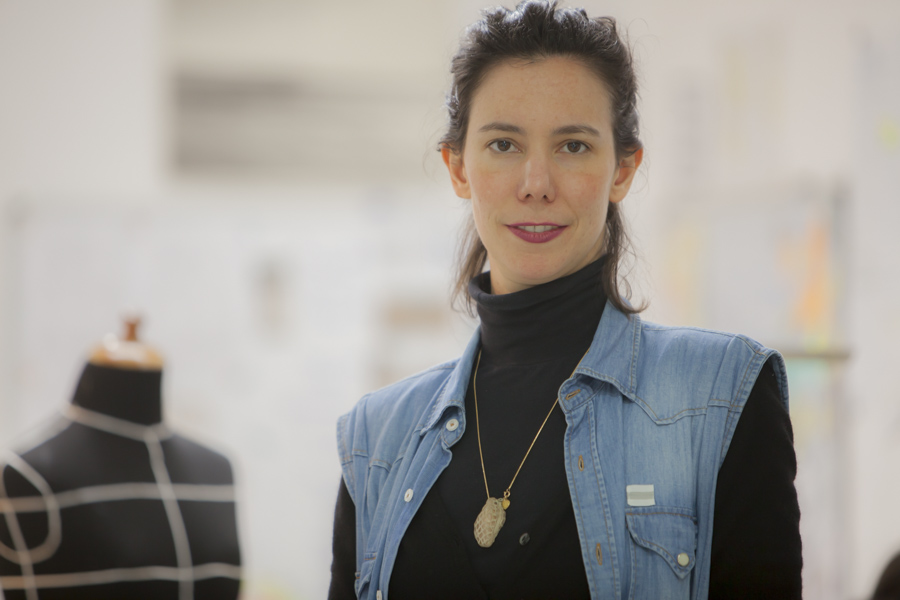 “But, what do you want to do?” Agustina Comas does not remember the number of times she has heard this question since she decided to create clothes through upcycling, a process of recovers, transforming and replacing discarded products. “Factories reject pieces that do not go through quality controls every day. This leftovers are raw material for us,” says the 36-year-old Uruguayan designer and creator of the brand that bears her name.

The company is installed in a shed in Butantã in the west area of São Paulo. The main material for the brand is the discarded fabric from the manufacture of men’s shirts, which is turned into women’s dresses, skirts and blouses under Comas’ close watch. “Our work begins with the selection of discarded pieces. We identify the best fabrics and choose the ones that, from our design perspective, are the richest,” says the designer-entrepreneur, who studied textile design and fashion at Escuela Universitaria Centro de Diseño de Montevidéu Agustina. Since Comas was created in July 2015, the brand’s work has prevented 3,000 meters of fabric from being dumped in the trash.

Agustina at Comas’ shed, where clothes are produced, in Butantã in São Paulo (Zé Gabriel/Believe.Earth)

SWEAT, WORK AND PUT YOURSELF OUT THERE

Brazilian fashion had already been on Agustina Comas’ radar since the early 2000s, when her father, owner of a transportation company, gave her some magazines on the subject. During her last year at university, she got a press credential from El Pais of Uruguay and went to São Paulo Fashion Week as an international correspondent. She went to all the fashion shows and parties: “I put myself out there, equipped with my snapshot camera.”

Those two weeks of intense programming were enough for her to exchange her desire to live in Europe for a new home in São Paulo: “It was in São Paulo that things were happening.” She landed in the city in 2004. She had already graduated and decided to look for an apprenticeship. “I didn’t know anyone. It was another language and another country, but I thought: I’ll take my chances. I started sending resumes everywhere.” Finally, she met Jum Nakao and had the opportunity to work as an intern on the stylist’s team in the iconic collection A Costura do Invisível presented at SPFW in June of that same year. They spent more than 700 hours shaping the elaborate paper clothes worn by models with Playmobil wigs. In the end, all dresses were destroyed on the runway. “I cried backstage,” says Comas.

The performance gained recognition from the French Fashion Museum as one of the greatest fashion shows of the century. “Jum prepared me for the market. His knowledge added to my education, which was very good for me.” Later, Nakao was invited to be the fashion director of the brand bearing the name of tennis player Guga Kuerten. “He called me to make the men’s line, something that I had always enjoyed. We set up a team and started to develop the brand.” It was a bold project. Everyone moved to Florianópolis and spent a year living in the capital of Santa Catarina. But the business didn’t take off and the company closed six months later.

Detail of the collection at Comas’ in São Paulo as well as the library and prototypes (Zé Gabriel/Believe.Earth)

A DIFFERENT WAY OF THINKING
The stylist improved her method of creation over the years while working for brands in Brazil and Uruguay. In 2008, she learned how to “think with her body,” working on the In-Use project she developed with fellow Uruguayan Ana Inés Piriz. “We started creating clothes from our own clothes: We wore the same piece in different ways, created a repertoire of ideas and took pictures of everything. It was a way of deconstructing the process to achieve a result that we would not reach by drawing,” she says. The idea of this experience is “to throw one off.”

Today, the stylist teaches the method, the same one she has adopted at Comas, in her workshops. She proves that from a single shape, which is the men’s shirt, you can develop a variety of pieces, such as saia universal (all size skirt), with a waist adjustment system that makes different bodies to fit on it.

The idea of working with waste from the textile factories came from thinking about the production process. “I was shocked when I started to think about all the garbage generated and the damage it could cause,” she says. “I wanted to do something to change that, but I was not connected to people. I was not experienced. I was constrained by that. So, I decided to begin working in a textile factory.” The figures released by Associação Brasileira da Indústria Têxtil e de Confecção (ABIT) help to support the stylist’s conviction that there is an immediate need to find solutions. In the Brás and Bom Retiro areas alone, ABIT estimates that 20 tons of textile waste is thrown out every day. In Brazil, the clothing sector reached 5.5 billion pieces produced in 2017. About 5 percent of this total is wasted.

Each Comas piece is made from two discarded men’s shirts (Zé Gabriel/Believe.Earth)

“I only understood the term upcycling in 2010, when I was on holiday in London and saw a shop window with ‘clothes made from clothes’,” she says. After deep research, she met with other brands with similar ideas in England, Austria and Rio de Janeiro. “I realized that waste is a real problem and if well-managed can bring money and resources to lots of people. It is a kind of symbiosis relationship, in which the small industry establishes a bond with the big one and everyone  benefits.” WHEN THE IMPOSSIBLE WORKS
Despite having the same fashion-industry background as those working with bigger brands in the industry, Comas still faces barriers trying to get raw material for her products. “I’ve been in contact with two suppliers who do not understand the project. As the process is new, there is no consolidated supply chain, we have to create it.”

To keep the business working, the stylist maintains parallel jobs, as a training coordinator at instituto Renner and a consultant at Associação Brasileira das empresas de Componentes para Couro, Calçados e Artefatos (Assintecal). She says that her ignorance in management led her to start a business. “Anyone who understands business plans would never have done it,” says Agustina, who is helping to turn the unlikely into viable. It’s inspiring.