A carpenter’s son built a cultural center, which has become a social hub for his western São Paulo community 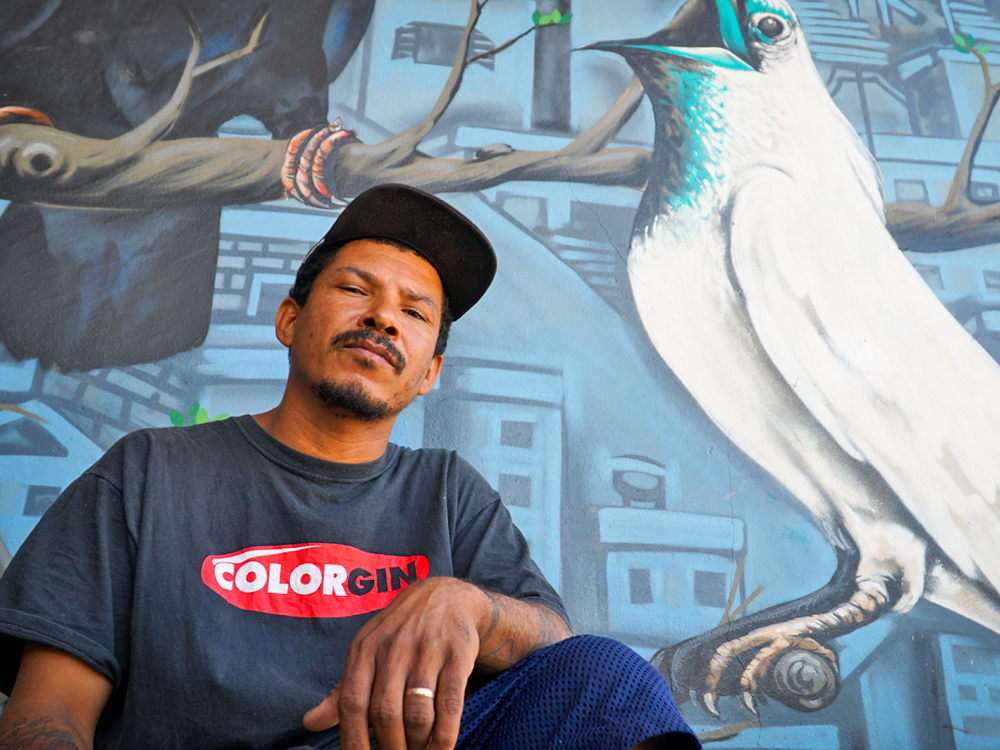 A graffiti vandal with an artist’s soul. That’s how we can, in the simplest way, describe community leader Alessandro dos Santos, 41. He was born in Januária, Minas Gerais, a city on the banks of the São Francisco river, famous for its cachaça (brandy) and the wooden carrancas (figureheads) adorning the boats. He migrated with his family to Vila Nova Jaguaré, on the outskirts of São Paulo, in the 90’s, when he was still a teenager. Without much schooling, but with lots of determination, in 2013, he created Canto da Arte (Place of Art), a cultural center which has become a social hub for the community. In a neighborhood that suffers from chronic abandonment by the state, Santos’s project offers culture, sport and above all, hope for a better future.

Santos inherited a talent for manual arts from his father, who was a carpenter. On the city streets, his talent took shape and color in the most urban of the arts: graffiti. In the outskirts of the suburbs, immersed in the culture of hip-hop, he exchanged his baptismal name for “Box.”

FROM VANDAL TO ARTIST

Between his arrival in São Paulo and the founding of Canto da Arte, Box’s life traversed some tricky terrain. As a teenager, he decided to join a gang of urban graffiti vandals, which led him to be arrested on more than one occasion. He had to provide community service, painting the walls of public schools. Doing this, he realized that he could use the same spray cans that had been getting him in trouble to rewrite his story.

By 2013, the former “vandal” had become a respectable graffiti artist, and decided to teach the art that changed his life to the children of his community. And, he decided to do it in a bold way. There was no physical place for the workshops, so he decided to use an abandoned municipal building. The space had housed a digital inclusion center some years before, but had become a site of prostitution and trafficking. “We installed ourselves without asking permission, because the place was totally abandoned,” he says. “The first time I stepped in that building, I had a feeling we were going to do something good for the community.”

In the early years, Canto da Arte had the support of a famous graffiti artist, Rui Amaral, whose work enlivens a tunnel connecting Paulista and Doutor Arnaldo Avenues (famous avenues of the city of São Paulo), the so-called “Paulista Hole.” Besides donating the material for the courses, Amaral offered graffiti workshops for the youth of Vila Nova Jaguaré. After that, Canto da Arte began to offer other courses, including capoeira, Muay Thai, theater and hip-hop. Such activities occupy Canto da Arte from Monday to Monday, drawing 40 students in a single class. All the courses are taught by volunteers who believe in the project.

People think that it is the courses that attract people to the place, but this is not the case. With the lack of leisure options and sociability in the neighborhood, the headquarters of Canto da Arte, with its colorful walls, well-kept lawns (Box himself tends the garden), trees and a playground with toys, is an attraction for the community. “The demand is not so much for the classes, but for the place, which offers peace and the opportunity for social integration,” explains Aline Soto, Box’s wife and co-director of Canto da Arte. “It is common for residents to come here for a sunbath and to enjoy the playground area and the green space.” 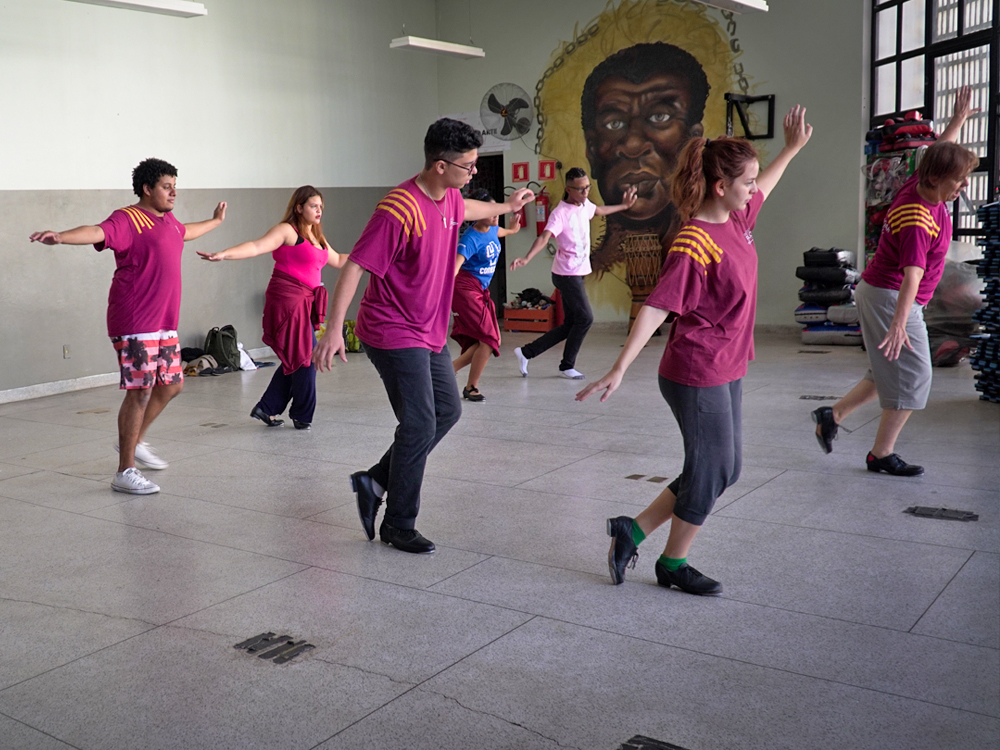 Even those who are not from the community recognize the importance of the project. “Canto da Arte is an environment that makes us think that we’re part of it,” says the occupational therapist Rogério Oliveira, who works for the city, and uses the place daily to offer therapy to a group of residents. “The residents feel like they own the place, and as a result, they value it. This strengthens and legitimizes any initiative undertaken there.” Oliveira could conduct the same sessions at the local Centro Educacional Unificado (one of over 40 public facilities on the periphery of São Paulo that are used for a range of educational purposes) a few meters from Canto da Arte. But he prefers to use Canto da Arte’s headquarters. “Here, they feel at home,” he says.

SUPPORT FOR GROWTH
With the restless spirit of an entrepreneur who is always thinking about the next step, Box walks around the headquarters and points, proudly, to an unfinished construction site, with bricks and wooden beams propping up the walls. “We are expanding the project area,” he says.

Funding for the new construction, as well as for Canto da Arte’s monthly fixed costs, such as water and energy, comes from bazaars during which donations are collected from the residents. But most of the construction, painting and other services that would involve variable costs are done by Box and community volunteers.

During the interview with the Believe.Earth team, Box guided his Canto da Arte colleagues through the repair of some electrical wiring and the laying of the next row of bricks. “We do most of the construction on our own,” he says. “So, money is saved.”

An important boost came in the middle of last year, when Canto da Arte received a sum of about twenty thousand reais (a little over 5,600 U.S. dollars) from Fundação Fenômenos, a foundation started by former soccer player Ronaldo Nazário. Besides expanding the building,  this donation also helped Canto da Arte purchase equipment for its gym, as well as bicycles, which will soon be leased to the residents of Vila Nova Jaguaré at symbolic prices. This will encourage responsible use and raise some money for the project. “Nowadays, the boys from the neighborhood go to Villa Lobos park [about 2km away] to rent bicycles. Soon, they will be able to rent here, paying less,” explains Box. Fundação Fenômenos has also supported Canto da Arte in another important way: mentoring the project’s directors to help them obtain new sponsorships. 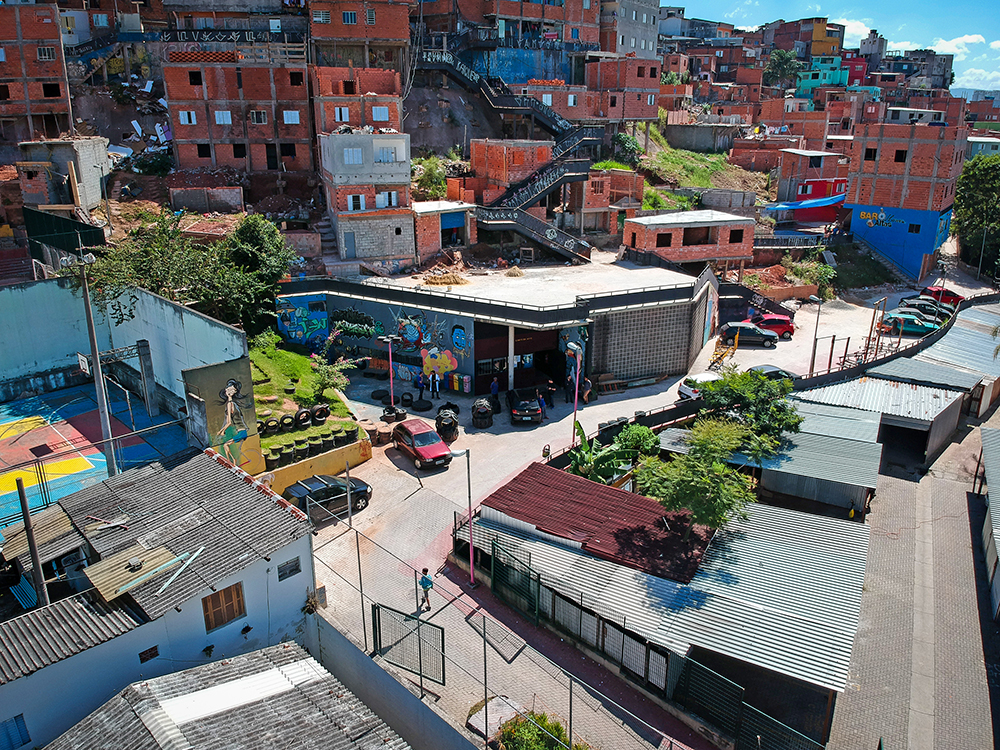 Amidst the monotonous, reddish-brown houses of the periphery, the project’s headquarters offer color, life and joy (Rodrigo Elizeu/Believe.Earth)

Gradually, the project that began with the occupation of a building is professionalizing, a decisive step towards sustainability. Canto da Arte’s co-directors, Box, Soto and Vaneza Gonçalves Amorim, keep their feet on the ground, although their eyes are focused on the future, specifically, the possibility of a better future for the community of Vila Nova Jaguaré, especially its children. Aline Soto emphasizes, “If I didn’t believe in that, I would not be here every day.” For them, this dream is even more important than financial resources. “I want my kids to understand the importance of what I’m doing and look for the opportunities I did not have,” Box says. “Money is essential. But the most important thing is hope and work.”