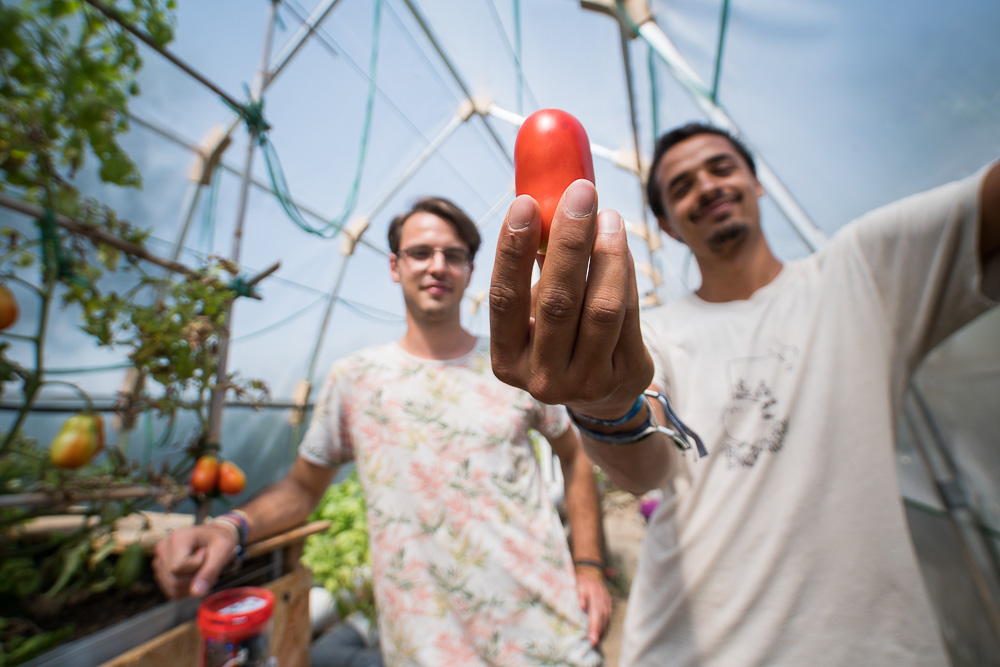 Twenty minutes from Barcelona, ​​in an area pocked with valleys, sits FabLab Barcelona, a space for technology education and manufacturing prototyping, maintained by the University of Barcelona.

It’s where two students, Guillaume Teyssié, now 29, and Loic Le Goueff, now 27, conceived and founded their company, Aquapioneers. Their idea was based on a food cultivation practice called aquaponics, a combination of aquaculture and hydroponics, in which plants are raised alongside fish, with the two lifeforms nurturing one another. The approach uses 90 percent less water than traditional agriculture. Aquapioneers’s business is manufacturing and marketing assembly kits for people looking to set up aquaponics systems in their homes.

The complete system looks something like a 1960s television set, roughly three feet by three feet, with a lamp-lit garden plot on top and an aquarium for a picture. Water is poured onto vegetables, which infuse oxygen into it. The water then moves into the aquarium, nourishing the fish, whose feces is then fed back up to fertilize the plants, no pesticides or artificial chemicals required.

“The health of the ecosystem in the aquarium serves as an indicator of the quality of the water that nourishes the plants,” Teyssié told Believe.Earth.

The system’s efficiency means that plants grow twice as fast as with traditional agriculture. It uses LED lamps and consumes roughly 50W of energy, a bit less than the average laptop computer.

THE CHANCE TO MAKE CHANGE
Teyssié and Le Goueff were following similar paths, studying environmental engineering, when they met at FabLab in early 2016. They quickly became partners. As soon as Le Goueff learned that Teyssié was designing a miniaturized aquaponic system, Le Goueff offered to help, saying he’d handle all the biological issues: water temperature, food, oxygen levels, and the size of the fish needed for each type of crop.

Le Goueff learned about aquaponics while working on sustainability initiatives in Israel, where he’d studied engineering.

“When I teamed up with Guillaume it was like activating a sleeping memory and seeing an old dream take flight,” Le Goueff told Believe.Earth, “that of helping people connect with nature, with what they eat.”

Teyssié had been in France working as engineer for about two years when he decided to go back to school to study renewable energy.

“I wanted the chance to have a real, positive impact on people’s lives,” he said.

His family wasn’t happy with his decision. And, he had a hard time adjusting to the economic realities of both unemployment and of his entrepreneurial ambitions. Teyssié resolved to live on 600 euros a month, roughly $715 USD, in hopes of investing what he saved into his future venture. In June 2016, once they’d created their prototype, the two founders went out and knocked on the doors of any company they could find that supported sustainability projects. Schneider Electric, the French energy management and automation giant, was one of their first customers, installing a aquaponics system in the employee conference rooms at its Barcelona office.

“Everyone who works in this building walks past them at least once every day,” David Castillo, a Schneider project manager, told Believe.Earth. “We integrated it into the life of our office. We divide the maintenance tasks and the harvesting, and then we drink mint tea together.”

Aquapioneers is also working with larger aquaponic systems at the FabLab and working to improve their documentation. The partners’ next plan is to take their idea to Barcelona restaurants. An aquaponics system would not only provide restaurants with a source of fresh vegetables: it would customers to hand-select the mint stalks for their mojitos.

A REPLICABLE MODEL
Before Aquapioneers was even a year old, the founders’ personal investments into the company had already topped 1,000 euros, or about $1,200 USD. They decided to launch a crowdfunding campaign to give themselves a boost. They set out to raise 15,000 euros (just under $18,000 USD). But, they overshot the mark, ultimately raising twice that amount, 30,000 euros (roughly $35,000).

The rewards the Aquapioneers founders promised to backers included prompt delivery of one of the company’s systems, along with complete open source documentation, which will allow the system owners to reproduce and adapt the product as they see fit.

“Our plan is to share the blueprints with our backers first,” said Le Goueff, “Then, in the second phase, which should begin by the end of November, we’ll publish them online.”

Manufacturing the system from scratch would cost roughly 200 euros (or $240 USD), the partners estimate. That includes the materials, plus 3D printing at a FabLab, of which there are dozens throughout the U.S., or at any 3D printing facility.