Bringing the native forest back to the city 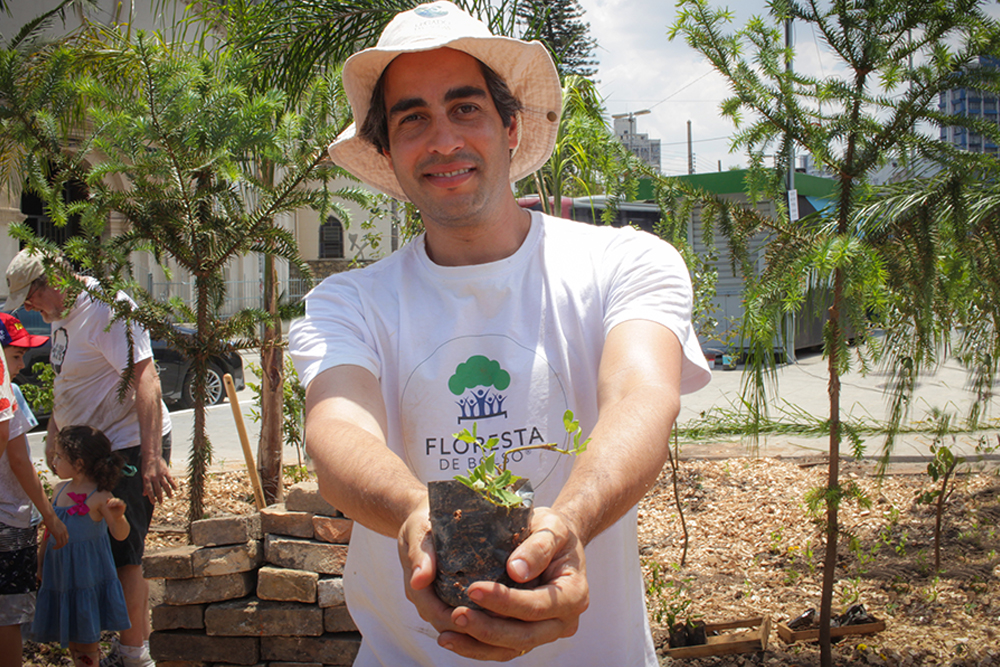 Botanist Ricardo Cardim is the creator of the Floresta de Bolso (Pocket Forest) technique, which is helping to restore the Atlantic Forest in the city of São Paulo (Rodrigo Elizeu/Believe.Earth)

The purpose of Floresta de Bolso is to bring native forests back to the streets of São Paulo. Created by botanist Ricardo Cardim, now 40, the technique allows the city’s residents to replant parts of the Atlantic Forest in spaces as small as 15 square meters (161.5 square feet). These mini forests respect the ecosystem’s original structure before degradation, returning, for example, to the original plant types. Because the approach is used in an urban setting, the spacing between trees is also unusual: one seedling per square meter (10.8 square feet). In traditional reforestation, the average distance between trees is about 6 square meters (65 square feet).

The idea is to recreate an ecosystem that, compared to those arising from traditional reforestation techniques, grows faster and requires less maintenance, once it is fully adapted to its surroundings. Because the mini forest is self-sustaining, it is more likely to survive independently of human action. “These forests are cores of biodiversity,” says Cardim. “The native seeds are spread by the wind and by animals, and they then bring back vegetation destroyed by exotic species from outside the original ecosystem, which now occupy 90 percent of the green areas of the capital.” Foreign species have no natural enemies in their new environment. They therefore develop freely, taking space from native species.

In forests, species evolve thousands of years to live in harmony. “In Floresta de Bolso, I bring together capable competitors that will each fight for water, light and nutrients and will seek maximum efficiency and cooperation to survive the struggle of the other,” explains the botanist. There is a mix of plants in the mini forest. The more rustic and fast-growing, called pioneers, restore the soil and bring moisture and shade, helping more fragile species to progress. The fruit trees are planted on the edges of the “Pocket Forest,” where they receive the proper amount of sun and humidity. This strategy allows them to fruit more easily and develop laterally, rather than upwards, while remaining lower and more accessible than the other trees.

Cardim’s first experience in replanting was in 2013, in the backyard of his workplace, a sustainable landscape architecture office. “I set up a small forest using what I had studied. In six months, seedlings went from 1.5 meters (4.9 ft.) to 3 meters (9.8 ft.) and were full of leaves,” he recalls. He brought the concept to a client’s project. After three and a half years, the trees were 8 meters high (26.2 ft.).

Floresta de Bolso, born on private properties, entered public spaces when Cardim began to organize with residents of local neighborhoods to spread the mini forest idea. “It is touching to see the change that community united can make,” says Salvador Campos, 46, a volunteer with the project. “Little by little, we have managed to have more green space in the city and new supporters.”

There are now a total of ten such public spaces, some of which were created at the request of large companies. Others came about through donations from individuals – a forest with 500 trees costs R$40.000,00 (US$12,462), including soil and seedlings – and the help of friends and partners, such as Nik Sabey, founder of Novas Árvores Por Aí (New Trees Around), and the architect and urbanist Sérgio Reis. “Florestas de Bolso bring more than shade, cooler temperature and better air humidity,” says Sabey. “When people plant together and can then see that the forest grows, a bond forms between nature and the human beings.” The forest benefits the city and its people. “These joint efforts nourish residents’ affective relationship with plants and awaken in them the desire to take care of those species,” says Reis. Aerial view of a Floresta de Bolso in Largo da Batata, which is in the western area of São Paulo. After only six months, plants have already overtaken the space and biodiversity flourishes (Rodrigo Elizeu/Believe.Earth)

Forests in the middle of a city, since they are dense and heterogeneous, attract birds that are otherwise unusual in an urban space. Those birds may eat pests like termites and cockroaches. The forests also extract carbon from the air. According to the biologist Marcos Buckeridge, a large adult tree in the city of São Paulo accumulates, over 60 years, 5.6 tons of carbon in its trunk. A mini forest with 500 small, medium and large species can retain 3.4 tons per tree in the same period. That means that as a result of that mini forest, there are 1,700 fewer tons of carbon  in the air.

As many of the species planted in florestas de bolso are protected by law, they are expected to live for a long time, and not be destroyed to give space to real estate projects. “We have to roll up our sleeves to change this city that was built based on cars and concrete,” says Cardim. “Because if we do not, the government will not do it.” 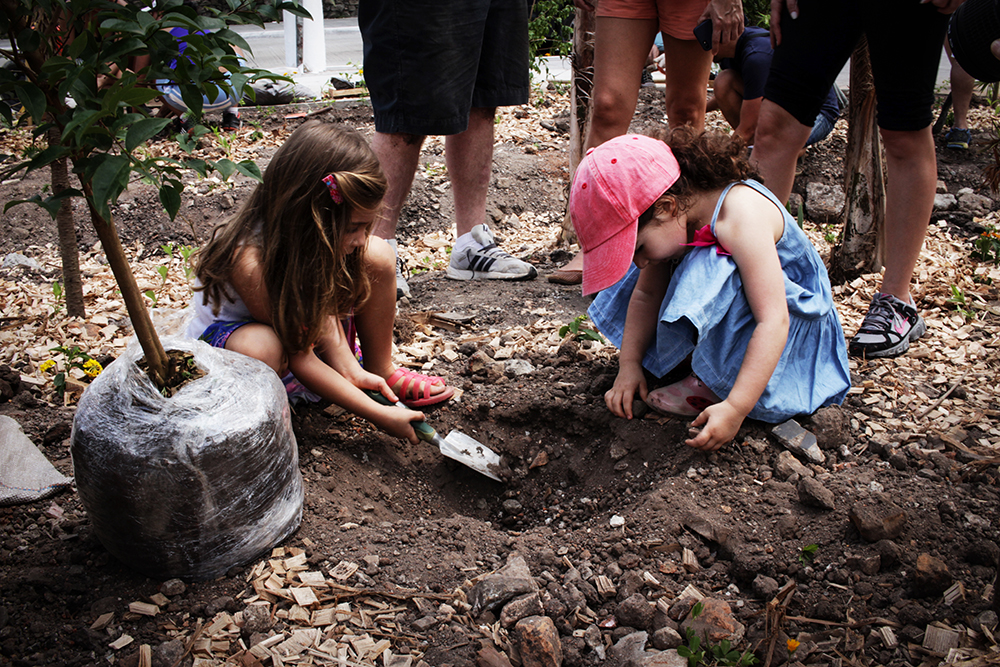 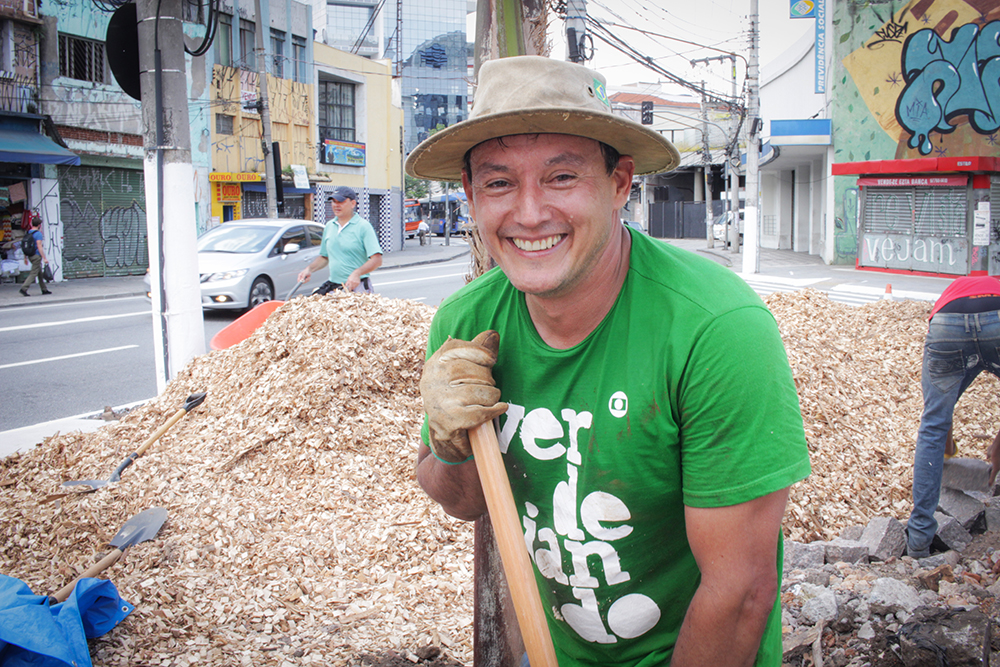 Salvador Campos has already participated in several plantings and believes that the community can make a difference (Rodrigo Elizeu/Believe.Earth) 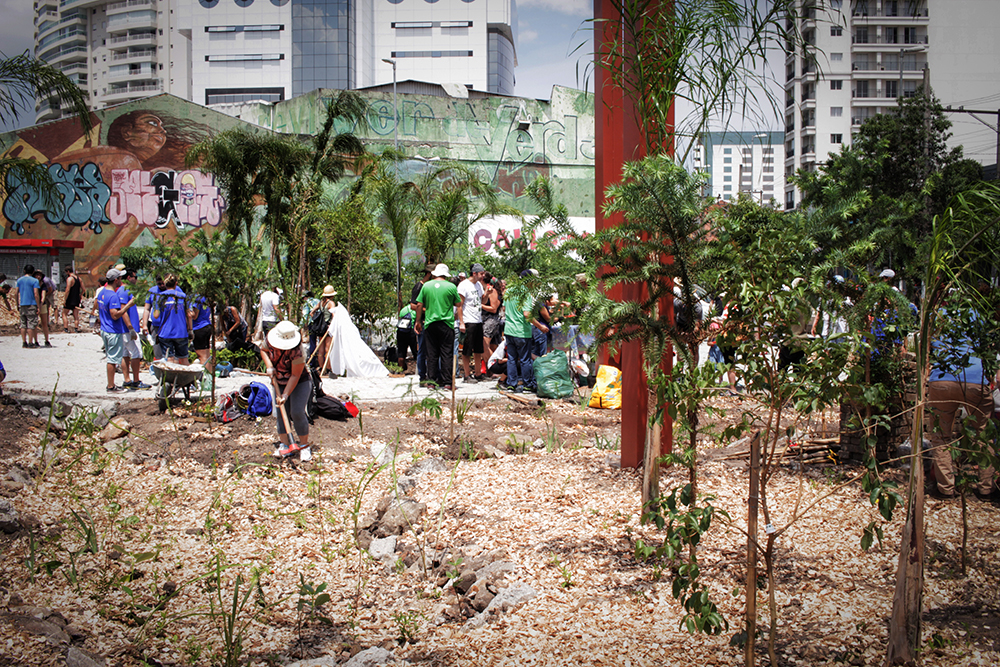 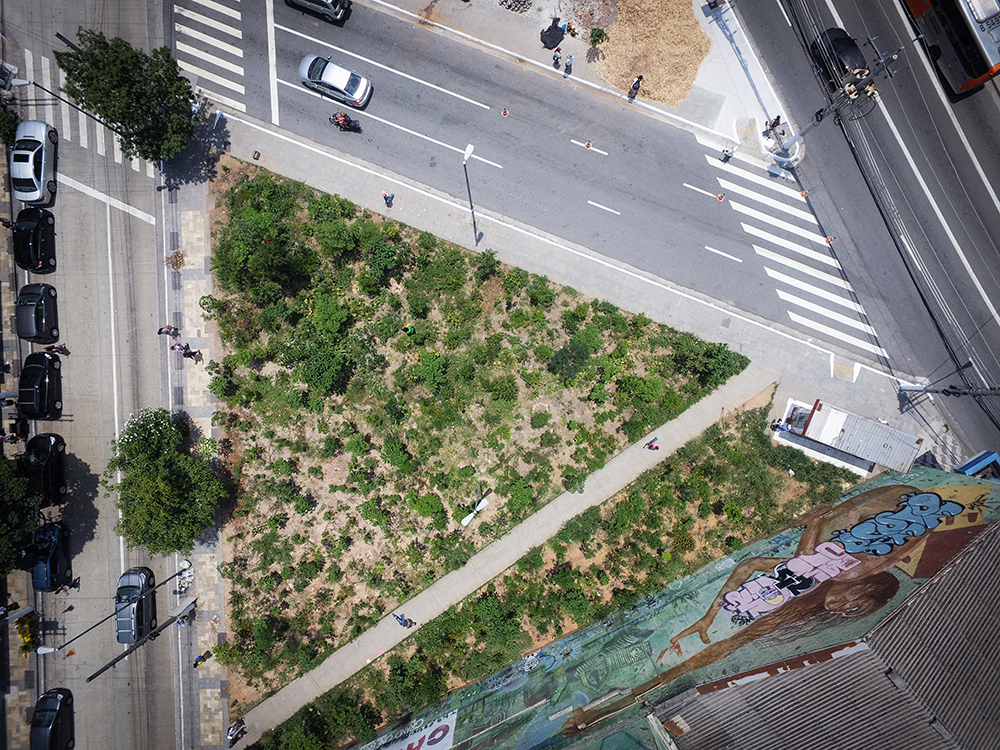 Floresta de Bolso was created in Largo da Batata in May 2017 (Rodrigo Elizeu/Believe.Earth)