A Florianópolis community becomes a model of community waste management 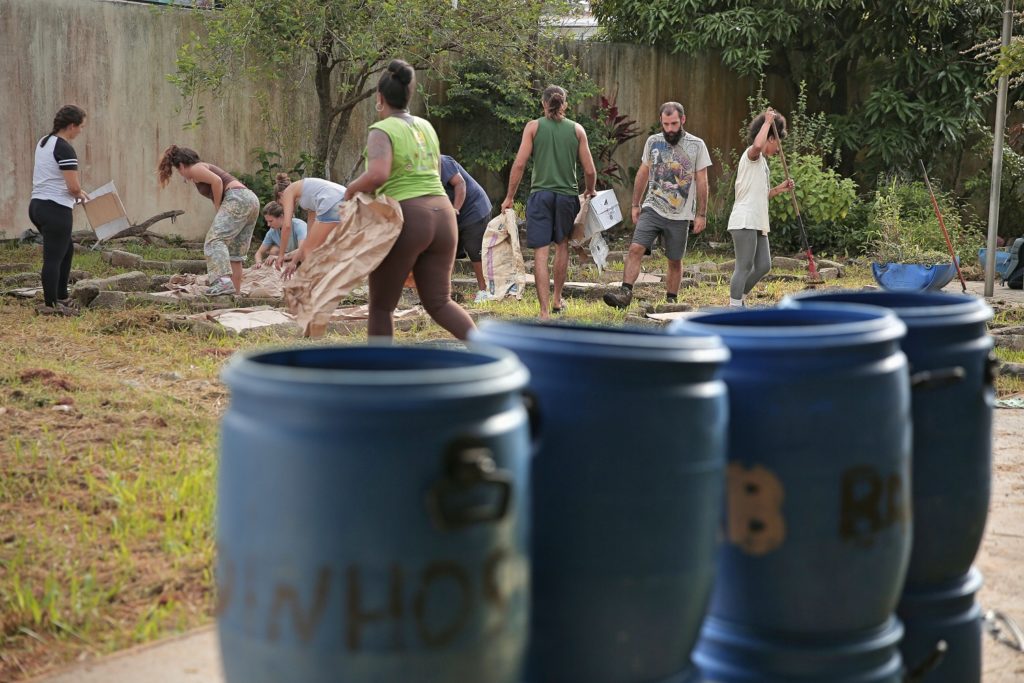 Volunteers from the Revolução dos Baldinhos (Bucket Revolution) project participate in a joint effort to make compost and plant seedlings in a school garden (Dieine Gomez/Believe.Earth)

The Monte Cristo neighborhood, located near the expressway to Santa Catarina island, is the setting for a story about a collective changing of habits. Ten years ago, in response to a public health problem afflicting an area already wracked with social problems, a model of community-based organic waste management emerged. The idea worked and became Revolução dos Baldinhos (Bucket Revolution), which is now a model for an entrepreneurial movement intent on having an impact on the environment and on the quality of human life.

It all started in 2008, when the Chico Mendes community, located in Monte Cristo, underwent a rat infestation. After two of their neighbors died from leptospirosis, an infection caused by exposure to contaminated urine of the animals, residents sought help. “A sanitation expert explained that it was no use killing the rats,” says Marcos José de Abreu, 37, an agronomist and one of the creators of Revolução. “We needed to take away the rats’ food source.” To do this they needed to focus on the treatment of the organic waste.

With the help of Cepagro, an NGO working on environmental education and urban agriculture, which, among other projects, runs the community garden at the América Dutra Machado school in Chico Mendes, residents developed a model of organic waste and composting. “Revolução was not the result of any single person’s brilliant idea, but an effort that brought many people together and counted on the knowledge of each one,” says de Abreu.

Initial challenges included spreading awareness of the benefits of selective collection (separating discards for recycling) among the residents, and attracting volunteers. “Two residents visited the houses, talked to the families and invited them to take part in the project,” says Ana Karolina da Conceição, 36, now one of the coordinators of Revolução dos Baldinhos. “After three months, there were already five participants, and I was one of them, who gathered all the organic waste produced by the families and placed it in buckets.” Today, the group includes hundreds of people. 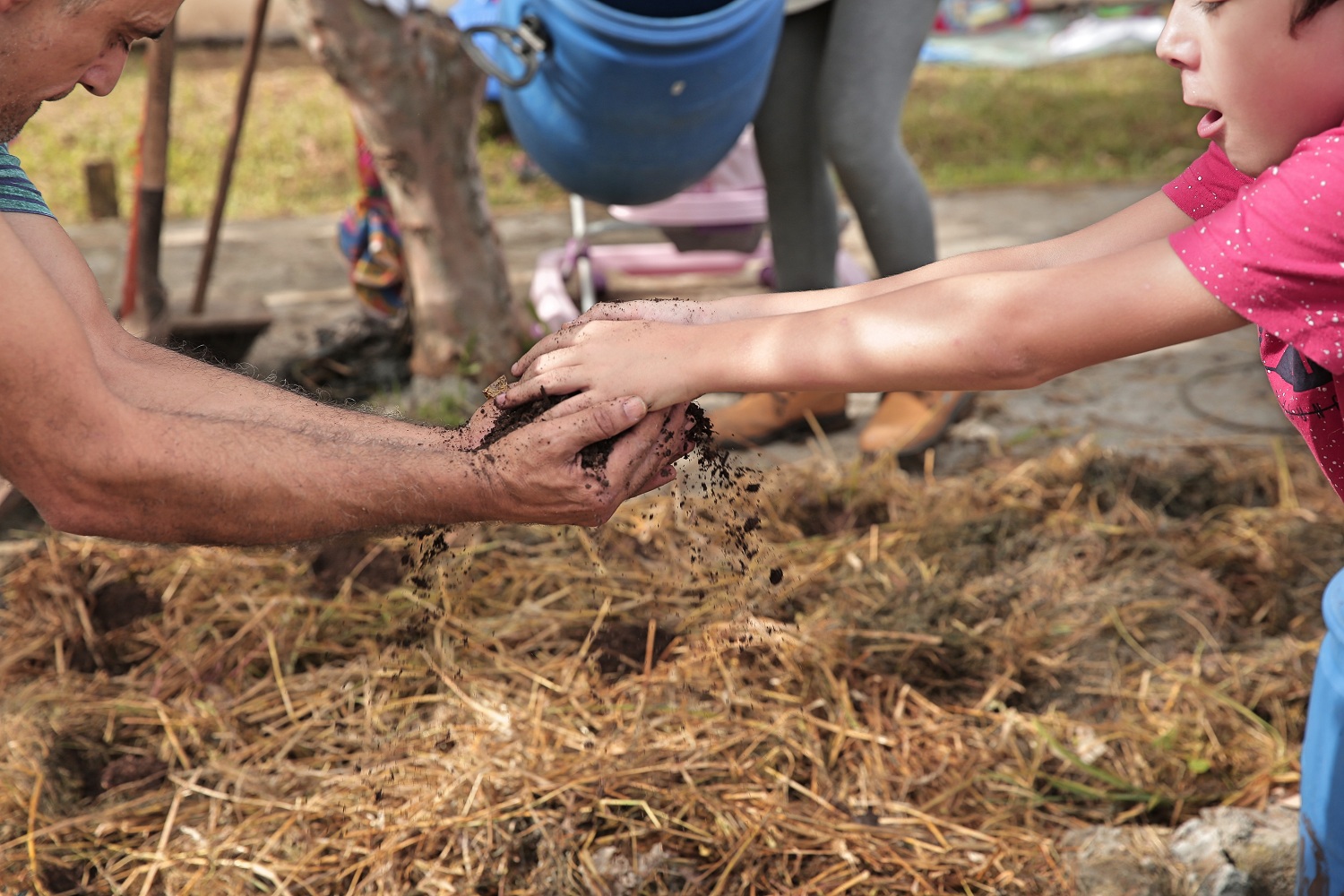 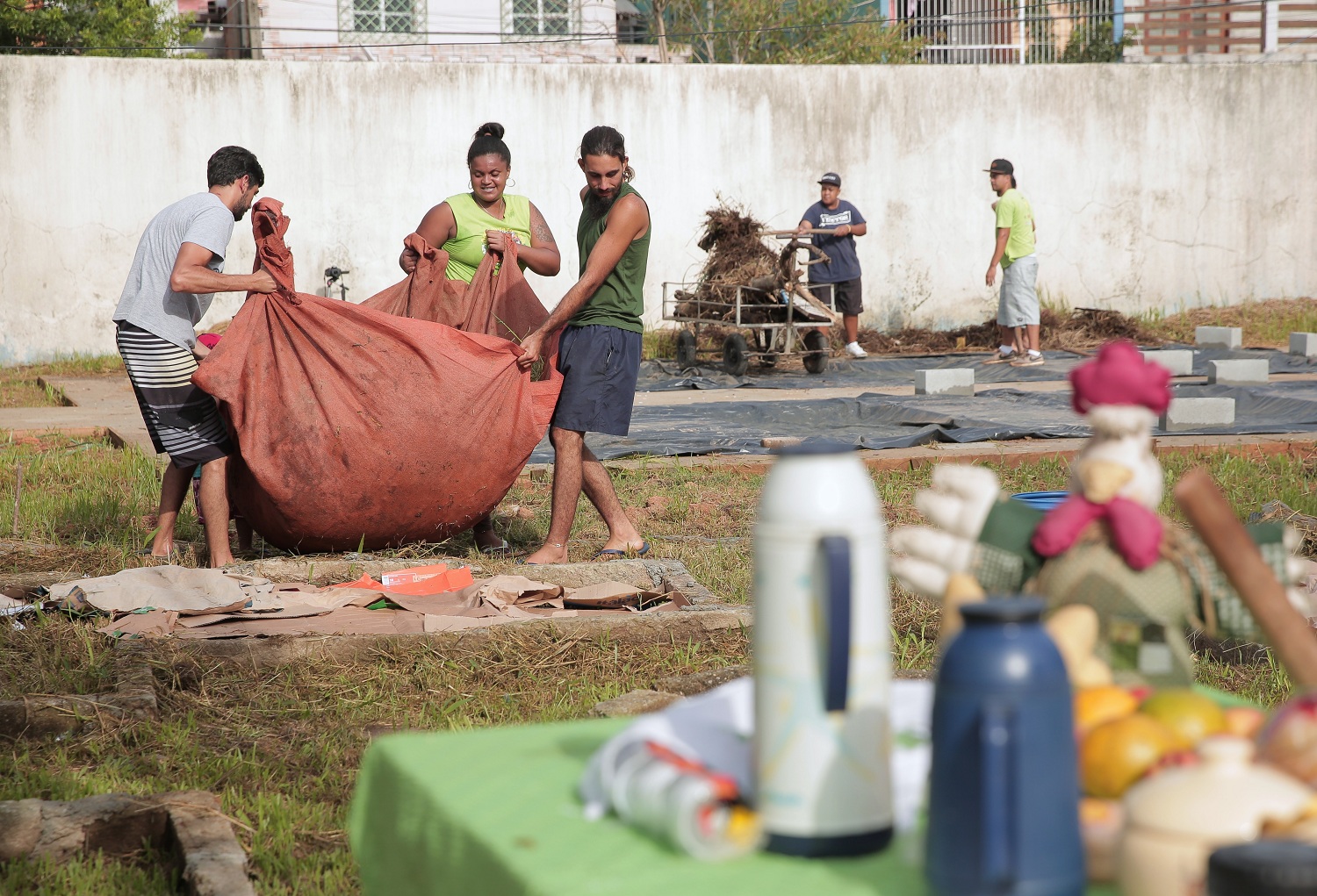 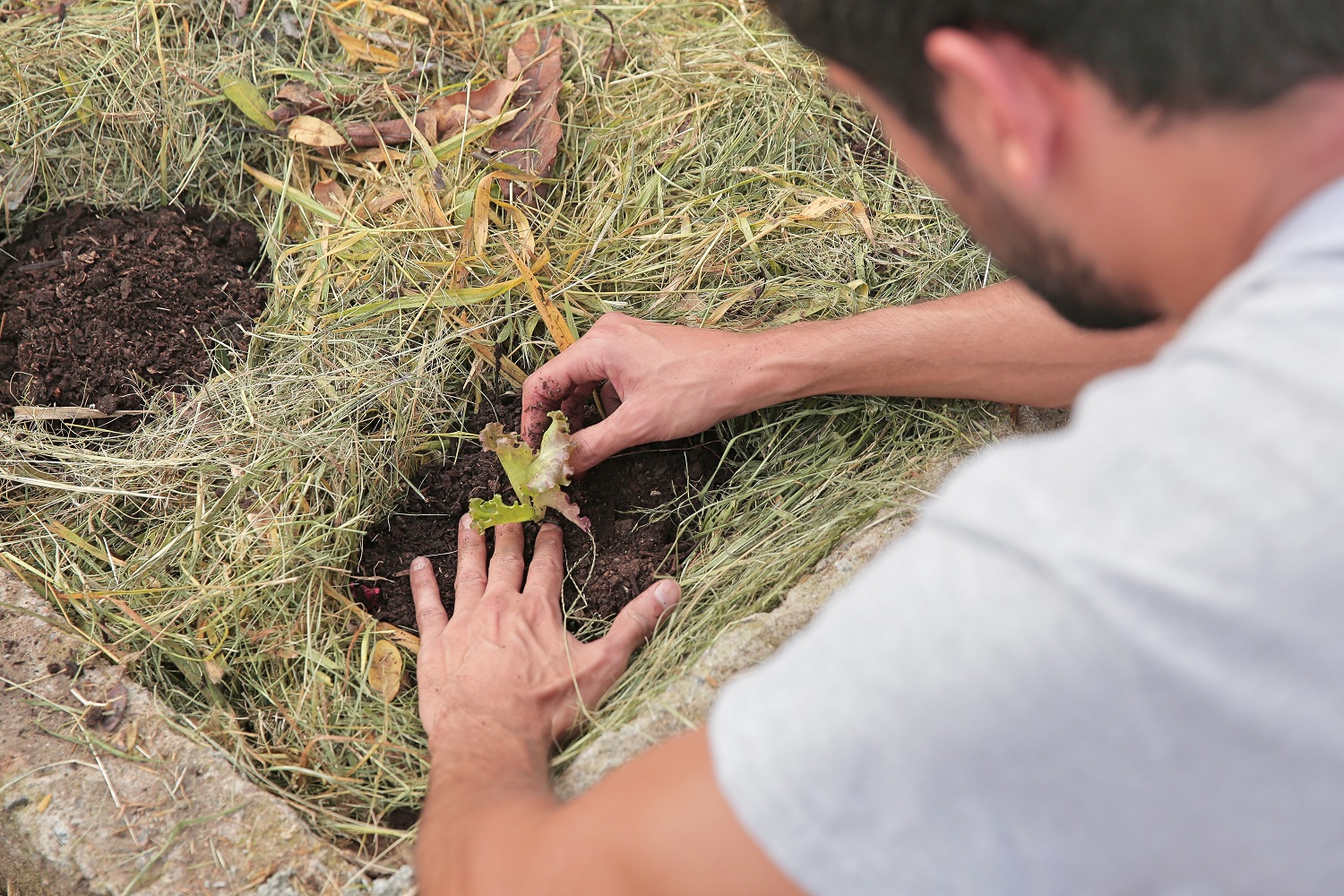 Herbs and vegetables grown in the school garden feed students and others in the Chico Mendes community (Dieine Gomez/Believe.Earth) 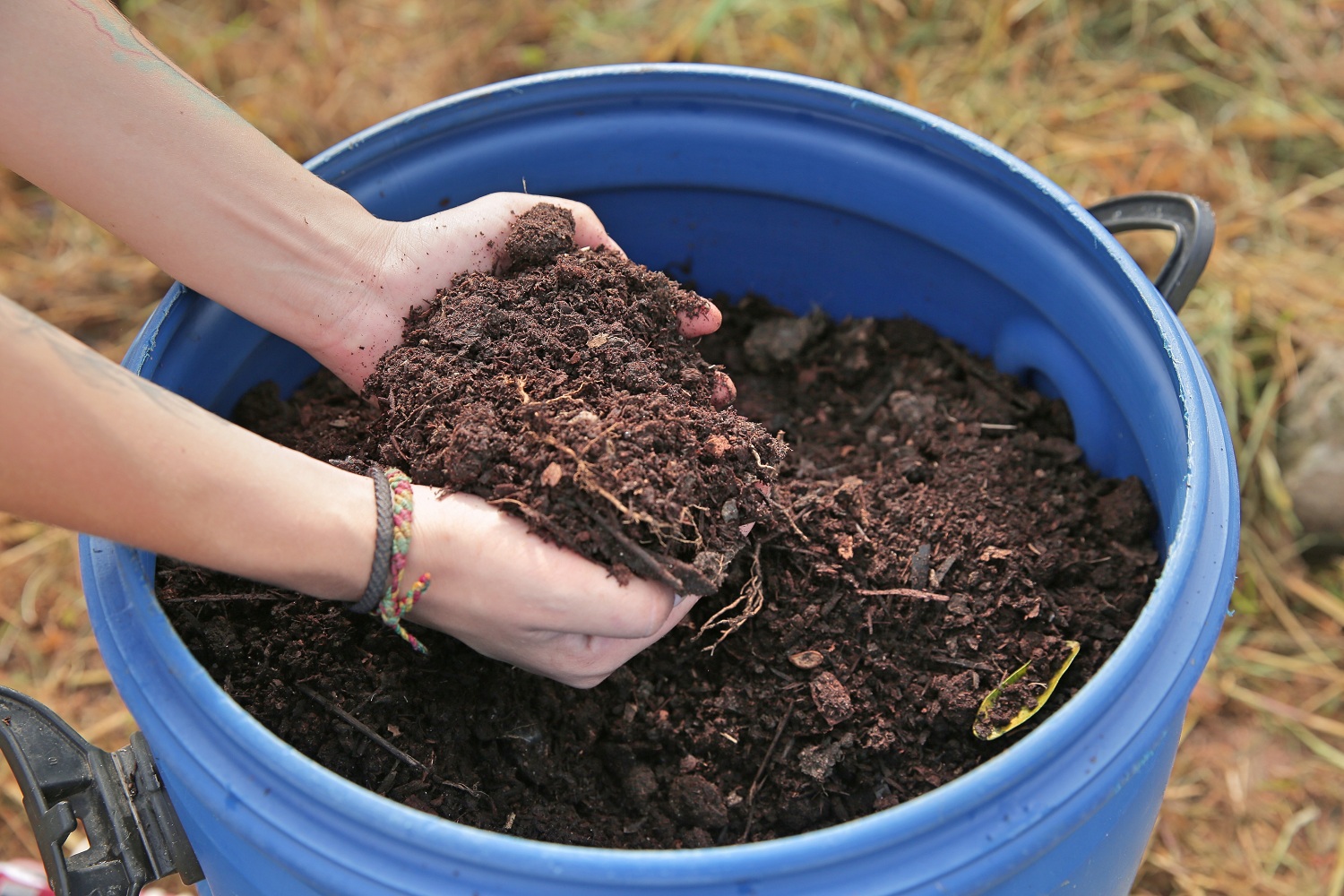 On Tuesday and Thursday mornings, a team leaves the Revolução dos Baldinhos headquarters to spend two hours collecting organic waste in the communities of Chico Mendes and Nossa Senhora da Glória. The group carries buckets in an improvised iron trolley. As the containers are filled, they are collected and replaced by empty ones.

150 registered families deposit waste at 38 collection points. Each street has a resident responsible for coordinating its organics recycling. “We estimate that 750 people directly benefit from the organic selective collection service,” says Cintia Aldaci da Cruz, 30, who lives in Chico Mendes and is one of the coordinators of Revolução dos Baldinhos. The whole operation gathers 8 tons of waste per month.

Besides removing the waste, Revolução dos Baldinhos also makes organic fertilizer by composting  it. The compost is used to grow herbs and vegetables at the group’s headquarters at the América Dutra Machado school, as well as in a garden on the banks of the expressway. Some of that produce is sold to raise funds to support Revolução dos Baldinhos, and some is distributed in the community. The group also collects used cooking oil, which is used to make soap.

FRUITS OF LABOR
Much has changed since the arrival of the buckets. “In the beginning, people used to put all the waste out in the open. There were a lot of rats and bad smells,” says Isaura Carmelina Loss, 70, a mother of two who has lived in the Nossa Senhora da Glória community for more than 30 years. When she started separating her organic waste and having Revolução dos Baldinhos collect it, she found that her immediate environment was cleaner. So she proposed that her neighbors do the same. Over chimarrão (a traditional South American caffeine-rich drink first consumed by the indigenous), she explains that because of the composting process and the organic fertilizer she receives from the project staff, she began planting again, as she used to when she lived in the interior of Rio Grande do Sul. “I like nature,” she says. “Now I have plants at home.”

In addition to more converts like Loss, Revolução dos Baldinhos has gained visibility and recognition. In 2011, Ana Karolina da Conceição, one of the coordinators, went to Turin, Italy to give a presentation describing the Florianópolis experience. In 2013, the project won  second place in the competition for the Social Technology Award from Banco do Brazil, among the four innovations emerging from Minha Casa Minha Vida (a government program facilitating home ownership for low-income Brazilians). The Legislative Assembly of Santa Catarina also recognized Revolução dos Baldinhos for good environmental practices that promote healthy eating. This year, the group’s method will be replicated in a Minha Casa housing complex in São Paulo. 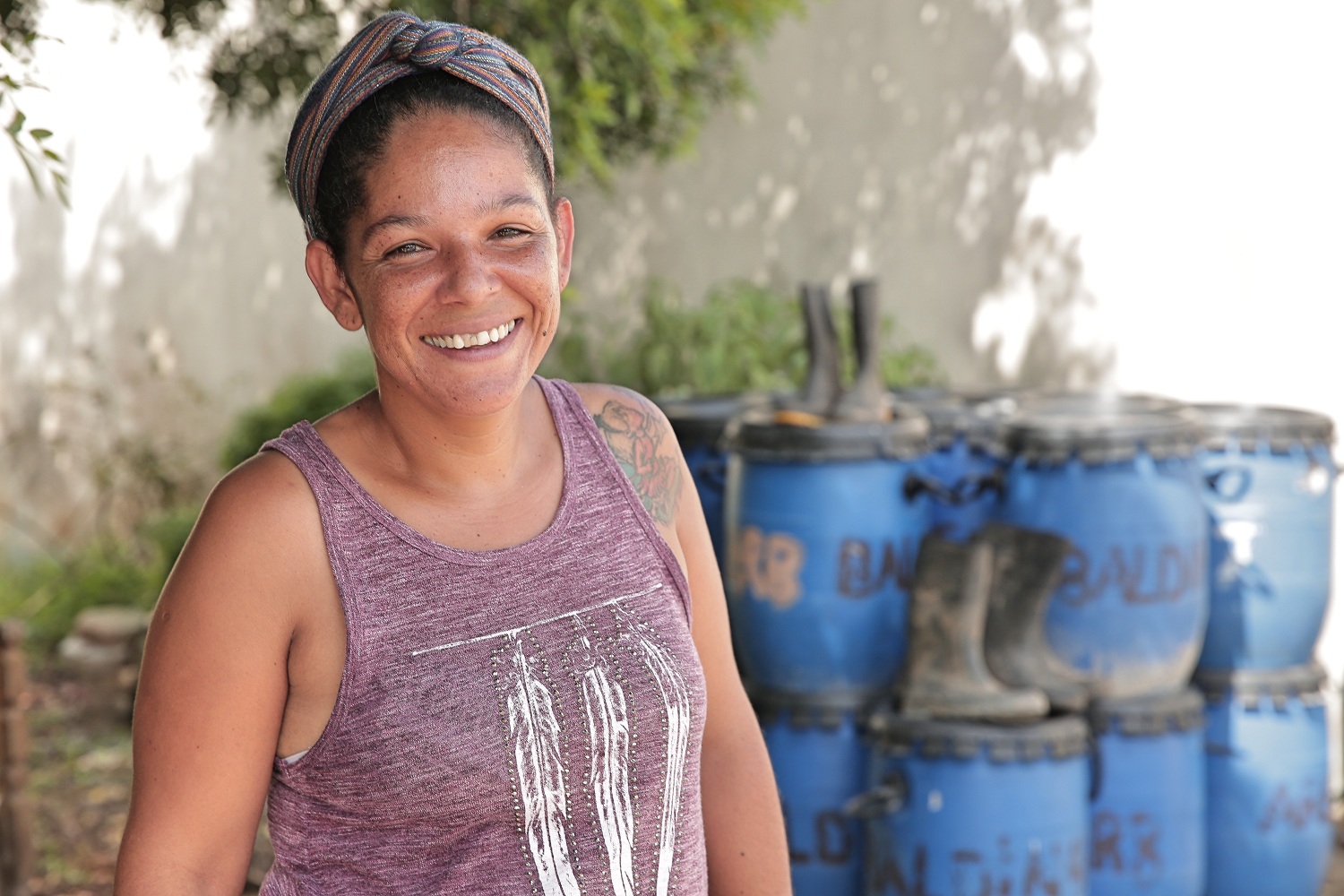 Ana Karolina da Conceição, coordinator of Revolução dos Baldinhos, was one of the first residents to participate in the collection process (Dieine Gomez/Believe.Earth) 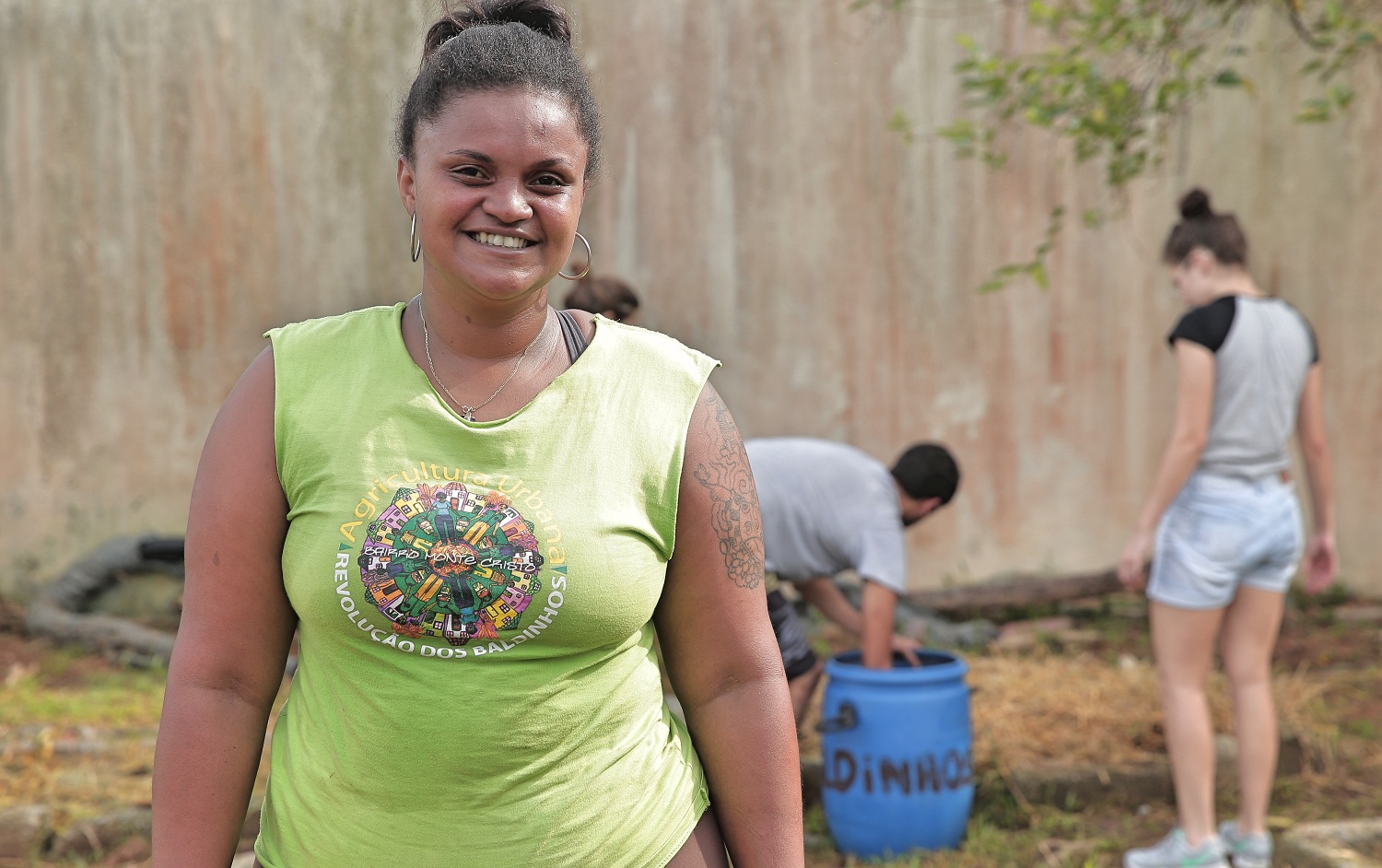 Cintia Aldaci da Cruz, one of the coordinators of Revolução dos Baldinhos’ community waste management, has been working with the project for 10 years. (Dieine Gomez/Believe.Earth) 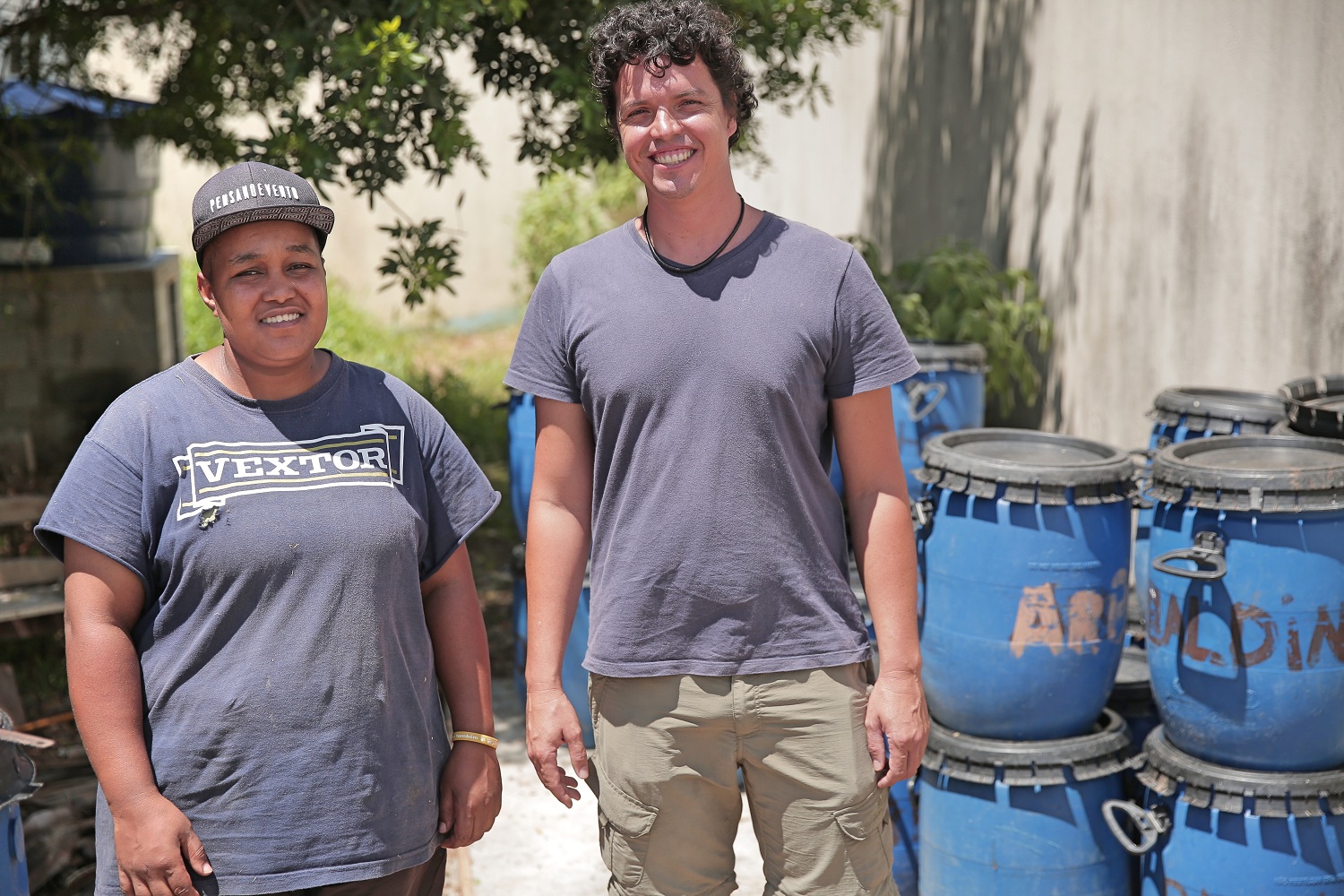 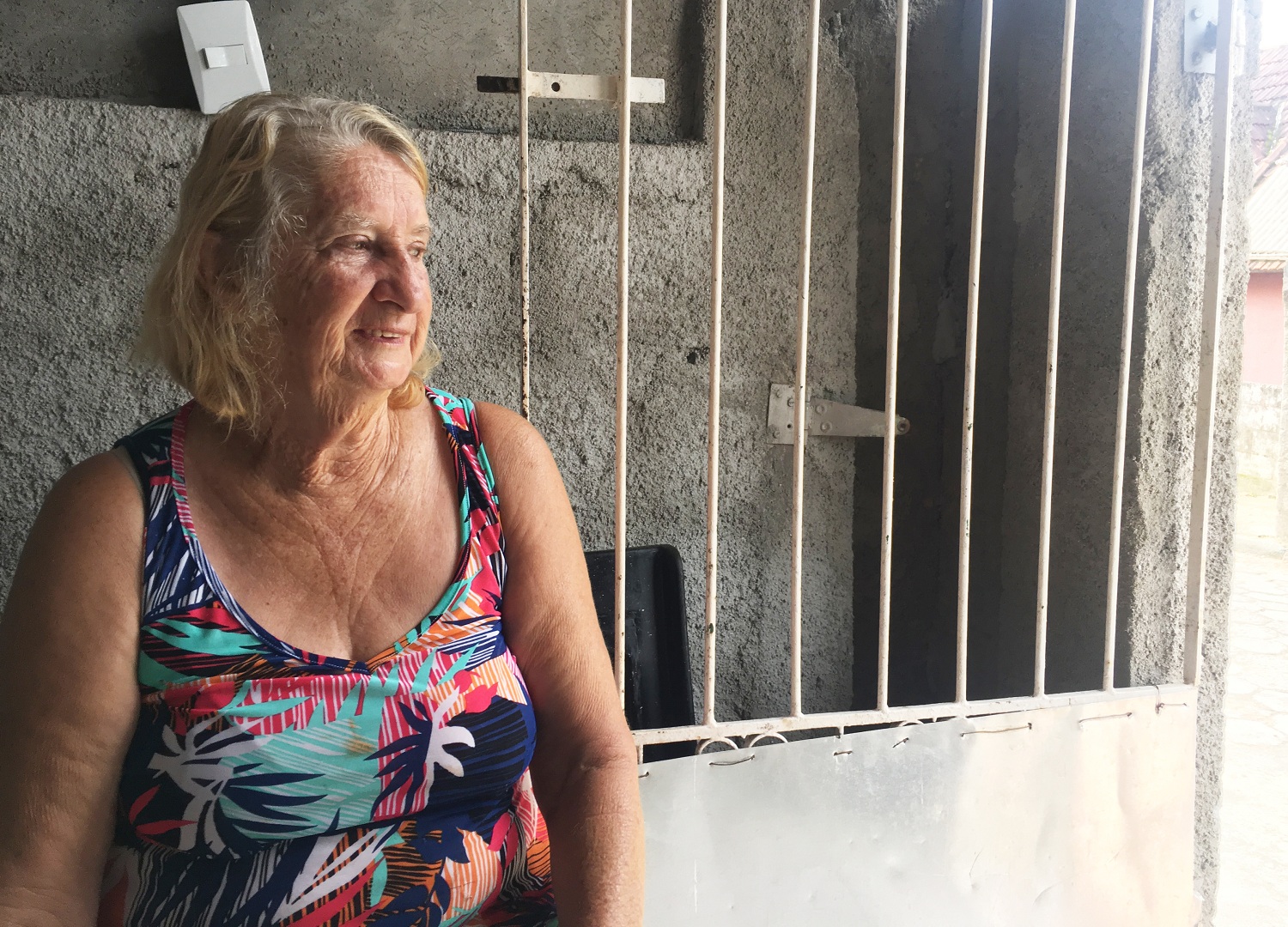 Isaura Carmelina Loss, a resident of Nossa Senhora da Glória community, is one of the project participants (Clarissa Peixoto/Believe.Earth)

To keep everything working, Revolução dos Baldinhos receives donations or submits proposals to the public through Cepagro, the NGO. Workshops and lectures on the experience and on collection and composting techniques also generate income. “We want to formalize our role as a cooperative, improve our way of working and establish other partnerships to perhaps bring Revolução to other neighborhoods,” says Ana Karolina da Conceição.

Revolução is about more than waste collection, composting and food production. “When we go to a house to collect the buckets, we talk to these people, try to find out what happens in their daily lives and try to help them solve problems,” says da Conceição. Cintia Aldaci says Revolução also boosted residents’ self-esteem. “People began to realize that they have strength, they are empowered, and it is possible to do something,” she says.