Cinthia Rodrigues: A bridge between society and public school 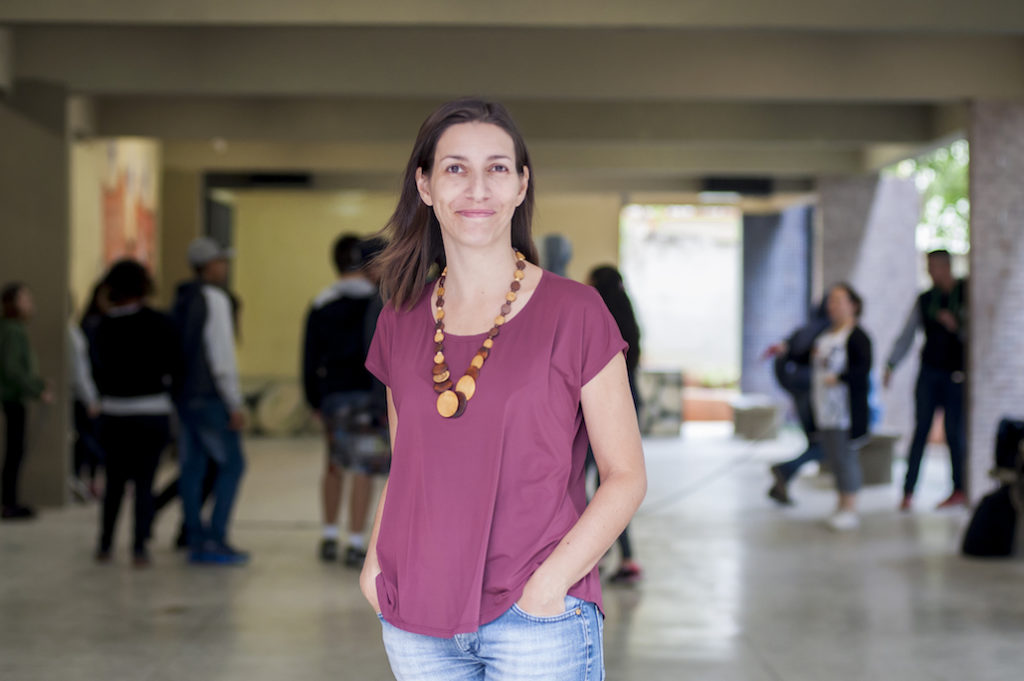 Cinthia Rodrigues is the creator of Quero na Escola (I Want Something at School), a website connecting students who want to learn with volunteers willing to teach (F. Pepe Guimarães/Believe.Earth)

Journalist and school counselor Cinthia Rodrigues studied at a public school. She also saw the challenges facing her mother, who was a public school teacher. Having lived so intimately with the reality of the classroom,  Rodrigues has always wanted to make the school environment a richer and more transformative place.

But it was only after the birth of her two children, who have never studied in a private school, that she began the work that today is almost a mission. Cinthia is the creator of Quero na Escola (I Want It At School), an online platform connecting the high school students from public schools who want to learn more with volunteers willing to teach.

Here’s how it works: The student registers and describes what knowledge, outside of  the mandatory school curriculum, he would like to have. Quero na Escola‘s team then checks to see if they have a specialist already registered for that subject. If they don’t, they try to find someone who can help the student. “I realized that a lot of people want to help improve education in the country and do not know how,” says  Rodrigues. Today, the portal has more volunteers available than requests for help.

In its two years, the project has been responsible for more than one hundred classes, lectures and workshops on subjects as varied as music, feminism, environmental education, racism, the LGBT movement, depression, startups, Islam and career counseling. At the Professor Ederlindo Lannes Bernardes Public School in Uberlândia (state of Minas Gerais, in Brazil), Paola Bernardi, a volunteer, talks to students about how to “learn how to learn” (Photo: Quero na Escola)

In August 2015, the platform launched with eight lectures and workshops for 415 people. Many of them were attended by several classes at the same time. In 2016, the platform facilitated 46 classes for more than 3,000 participants. By October 2017, the site brought knowledge to 5,000 public school students. With requests from 427 schools in 213 cities and 517 registered volunteers, the platform has involved people from 23 states.

The project only goes to a school if someone from the institution asks for it. That is one of the main distinctions between this initiative and others, says the social scientist Daniel Cara, coordinator of the  National Campaign for the Right to Education. “I think it’s important that society participates, and it’s fundamental that it’s not a top-down action,” he explains. “A lot of volunteer initiatives take to the classroom subjects that students do not want, which causes their projects to be rejected.”

The schools’ resistance was a challenge at the beginning of the project. Schools directors and coordinators thought that the extra classes could overload the school curriculum. Now that Quero na Escola is better known, this obstacle barely exists. At the request of a teacher, volunteers went to Escola Municipal Arthur Etzel in northern São Paulo to lead the children in physical fitness activities (Photo: Quero na Escola)

Not only can teenagers register requests for classes, but with the ‘Special Teacher’ project, Quero na Escola meets requests made by teachers once a year. “The best of all is when a teacher asks something to complement learning that will continue in the classroom,” says Rodrigues. If the workshop is not linked to a theme that will continue to be part of the curriculum, it gets lost: The students receive that knowledge and go back to the regular lessons the next day.

EMOTIONAL IMPACT
The project has brought benefits besides knowledge. One is that it boosts the self-esteem and self-confidence of the students who request the classes. When the school managers from the Public School Anecondes Alves Ferreira in Diadema (state of São Paulo) received a call from Quero na Escola to check the feasibility of attending a workshop requested by the third-year high school student Aderson da Silva Vieira, who made the request, he soon began receiving lots of compliments on his initiative. After the lecture, which was about how to reduce crime, Aderson got even more appreciation from his teachers and fellow students. “Until that day, I was a shy and ashamed person,” says the student. “Later, I made new friends, I was called to attend a meeting about professions in high school and I learned to overcome my shyness, to expose my ideas and to believe in my strength.” Subjects like the one chosen by Aderson surprised the portal team, which anticipated that art, music, photography and creative writing would be the most requested workshops. In the past six months, however, sensitive issues, such as depression, self-mutilation, and suicide, have sparked even more attention and interest. “We have already done some classes about it, but we know that only initiatives such as Quero no Escola will not solve such problems on their own,” says Rodrigues.

It may seem counter-intuitive, but the counselor who has given birth to a public school support network hopes that one day the project will no longer be necessary. In Rodrigues’ dream, shared by so many other volunteers, schools will know that they only need make public the desire for knowledge to bring forth a group of collaborators willing to work for the same cause.