Ernst Götsch: The creator of the real green revolution

A Swiss farmer brings a new way of producing food in forests to his adopted country, Brazil 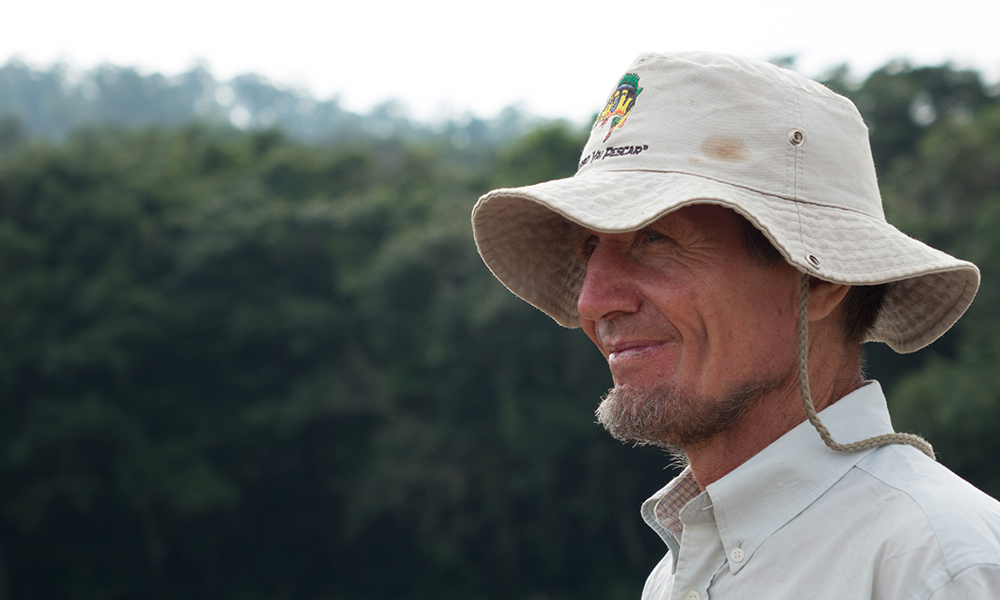 Ernst Götsch, farmer and the inventor of syntropic agriculture (Agenda Götsch/Life in Syntropy)

Ernst Götsch’s farm, in Piraí do Norte in the South of Bahia, Brazil, is named Olhos D’Água (Tears in the Eyes). The place is breathtaking, because of the surrounding lush forest, but the name of the farm refers to the 14 springs found by the Swiss researcher and farmer. When Götsch, now 69, settled in the region in the early 80s, the farm was called Fugidos da Terra Seca (Escaped from the Dry Land), a degraded area that had been cleared for intensive logging and then abandoned.

An expert on natural systems, Götsch used to wake up at 5 o’clock in the morning from Monday to Sunday to make his revolution. One year, he planted 500 hectares of forest interspersed with cocoa, bananas and greenery. A decade later, technicians from the Brazilian Institute for the Environment and Renewable Natural Resources (Ibama), in Salvador, were surprised to see aerial pictures of the region and went there to understand what was happening on the land of the  ‘foreigner’, as Götsch is known. The aerial view showed a dense forest, which hid a highly productive agricultural area. Aerial view of Götsch’s farm in Piraí do Norte in Bahia: Rich life in an area once punished by drought and degradation (Agenda Götsch/Life in Syntropy)

The system Götsch adopted, later named syntropic agriculture, regenerated the fertility of the soil, revived the springs that had disappeared and brought the rain back, generating a continuous cycle of renewal. How did he do it? “Working with nature and not against it,” answers Götsch. “Through strategies that look like the way natural ecosystems work.”

This concept considers that all species are part of a macroorganism that works under the logic of cooperation and unconditional love of life. “Human beings are part of this system,” he says. “Instead of exploiters, we can be creators of resources.”

The technique uses agriculture and the forest to revitalize the ecosystem. It spread and attracted people like Henrique Souza, owner of Ouro Fino farm, which is in Jaguaquara in the state of Bahia. In 1995, in his first year of studying agronomy, Souza heard about a Swiss farmer with a method of planting closely mirroring his own ideals. During his school vacation, he went to Piraí do Norte, located 65 kilometers from his home, to learn more. “I had no doubt that this was the path I should take,” he says.

Götsch became his mentor, both in college and on his land. With the Swiss farmer’s help, Souza turned his own property into a forest that produces the raw material needed to harvest pulps, dried fruits, honey, flour, seeds and seedlings traded by his family. All in a self-regulating environment, free from fertilizers and pesticides. It took 15 years for Götsch’s method be named: it is now called syntropic agriculture. But the term was already part of his vocabulary as a way to explain the power of ecological systems enhanced by human action. “Each plant needs not only soil, fertilizer and water, but microclimatic conditions to develop,” says the researcher. “When farmers understand it, they create biodiverse ecosystems that offer each plant a life bubble, with no need of poison and fertilizer.”

In degraded areas, recovery is accelerated by depositing organic matter in the soil. It is common to see Götsch with a bowie knife in his hands, pruning branches that will decompose, developing fungi and bacteria that help to fix nutrients such as nitrogen in the soil.

Seedlings aid in the planting of crops. As they grow, they give shade and help restore the soil’s fertility. As soon as two months after planting, the farmer can begin harvesting vegetables and, then, pineapples, corn, manioc and vegetables, generating income to invest in the recovery of the area and in new crops.

Götsch developed this system when he was still living in Switzerland. He worked at Zurich-Reckenholz Institute researching genetic improvement. There he questioned whether it would not be more productive to improve the conditions of plants, provoking ecological balance, rather than breeding them to be genetically more pest-resistant.

After resigning from the Institute, he spent a few years testing his ideas on European soil and received invitations to put them into practice. In 1979, Götsch taught methods of sustainable agriculture in a Nicaraguan refugee shelter in Volcan de Buenos Aires in Costa Rica, during the civil war in Nicaragua.

In 1982, after the war, Götsch came to Brazil to advise a countryman struggling with unproductive land in Bahia. While there he bought Fugidos da Terra Seca, planning to revive it through reforestation and cocoa cultivation. Today, his farm exports high-quality organic cacao worth four times the price of the conventional product.

After years applying his knowledge to smaller ecosystems, the researcher began to successfully experiment with his methods on a larger scale. Fazenda da Toca, owned by the businessman Pedro Diniz, is a property that already reaps good results.After learning about the work at Fazenda da Toca, a major grain producer in the city of Rio Verde, in the South of Goiás wanted to work with Götsch. In 2017, they started a partnership, deciding to plant 50 hectares of mechanized agroforestry. Götsch teaches farmers in Olot, near Barcelona, in 2016 (Agenda Götsch/Life in Syntropy)

THE CULTURE OF REGENERATION
Götsch has trained many farmers who now help him spread the method throughout different regions of Brazil as well as abroad. Sezefredo Gonçalves da Cruz (aka “son of Barra do Turvo and farmer since I was a young boy” as he likes to introduce himself), encountered the system in 1996.

That year, Götsch trained farmers in city of Barra do Turvo, in Vale do Ribeira in São Paulo. The agriculture prevalent in the area at that time was based on stripping the plantation and burning the remains in the field. “We worked hard burning and poisoning the soil,” says the 76-year-old da Cruz. “Instead of profits, we had losses and became poorer every day. The poison killed the insects, which were called plagues. But the plague is the man who wants to destroy nature.”

With other pioneers of syntropic agriculture in the region, da Cruz began to help his fellow farmers migrate to this model. The impact on household incomes is visible. “We live in the forest, we harvest and see the value of everything the soil provides. Life is there, we just need to be careful and keep it.”