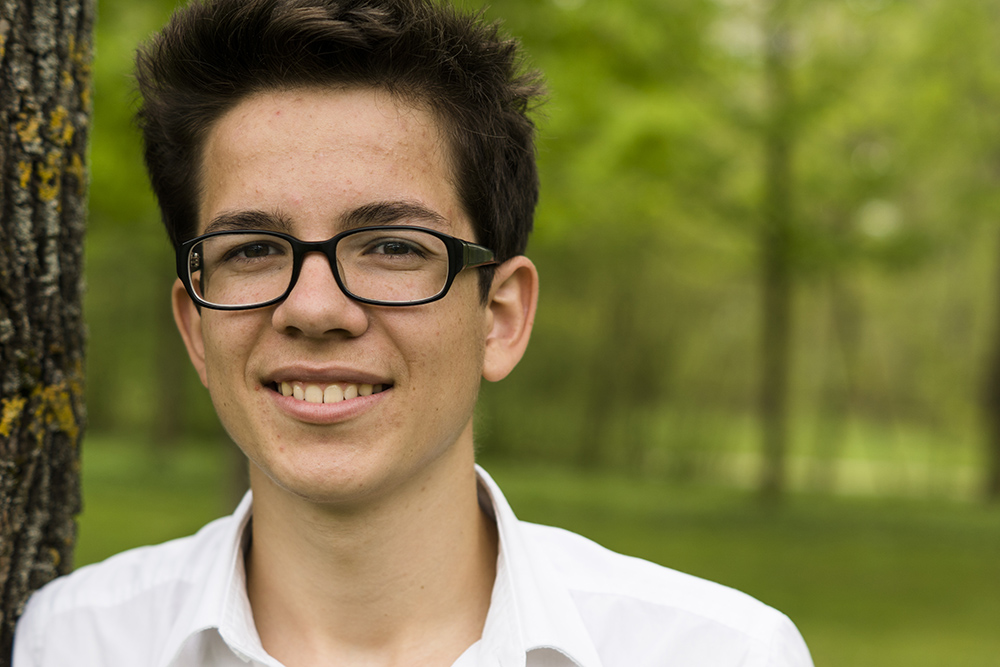 The winter of 2007 was exceptionally hot in the Bavarian region of Germany, where Felix Finkbeiner, now 20, lived with his parents and two sisters. The unseasonal heat had become the subject of conversation at school, and the teacher asked the students to research the climate crisis. Felix spent a weekend reading about the subject and found out two important things.

The first was that global warming put his favorite animal, the polar bear, at risk of extinction. The second was that there was a woman whose work was helping to prevent this: Wangari Maathai, the first African to receive the Nobel Peace Prize. Founder of The Green Belt Movement, Maathai was responsible for planting 30 million trees in Kenya.

Felix connected these two stories in his presentation to his classmates. He told them about how trees capture carbon dioxide and release oxygen, absorbing and storing the greenhouse gases from human activity. In closing, he exhorted: “We must follow Maathai’s example and plant one million trees in every country in the world!” He was only 9 when he founded Plant-for-the-Planet. “Back then, our aim was to save the polar bear. But soon we understood that it’s not about saving the polar bear, it’s about saving our future”.

In March 2007, Felix’s classmates planted the first tree in front of their school. Their example was followed by other schools. Within a year, students had planted 50,000 seedlings. They made a website and began holding — and promoting — planting competitions. These events caught the attention of the media as no previous environmental event in Germany had. Klaus Töpfer, Germany’s former secretary of the environment, as well as the former executive director of UN Environment Program (now UN Environment), became a patron of the initiative. 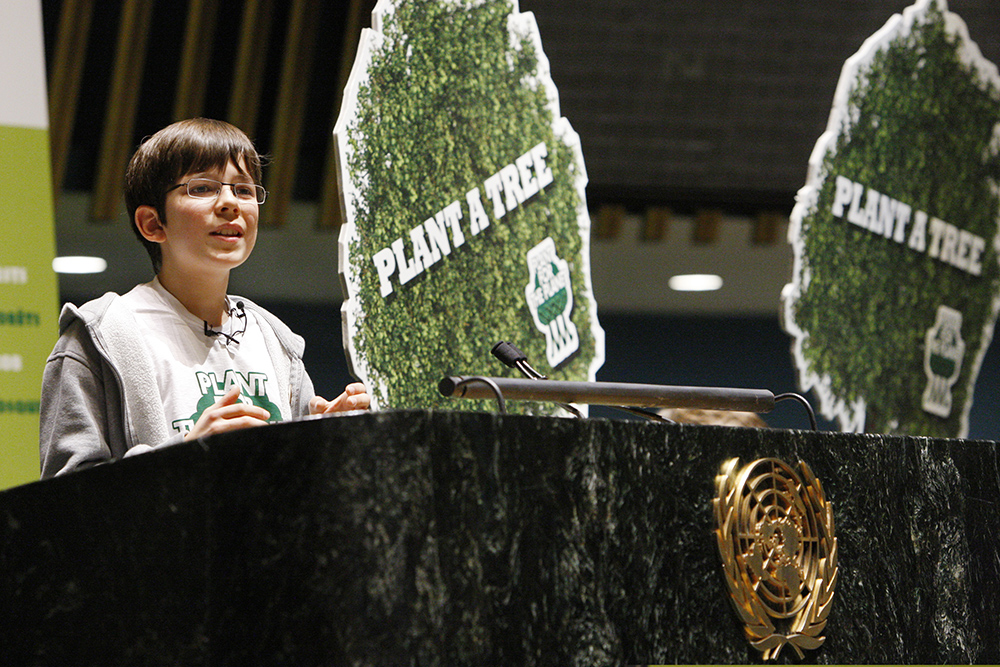 Finkbeiner speaks to the United Nations in New York in 2011 (Credit: Plant-for-the-Planet)

STOP TALKING, START PLANTING
Finkbeiner had just turned 10 when he presented his initiative at a meeting of the European Parliament. At the Youth Conference held in South Korea the following year, hundreds of children representing 56 nations took the stage, summoned by Finkbeiner, to demonstrate their commitment to planting one million trees in each of their countries. In Germany, the goal was achieved within a year. Other nations then reached the same number.

The Stop Talking, Start Planting campaign helped spread the idea, mobilizing political, cultural and artistic celebrities for support. UN Environment, which had originally launched the Billion Tree Campaign, shifted the management of that initiative to the children and youth of Plant-for-the-Planet. By 2011, more than 12 billion trees had been planted around the world, with the support of governments, businesses, individuals and civil society. 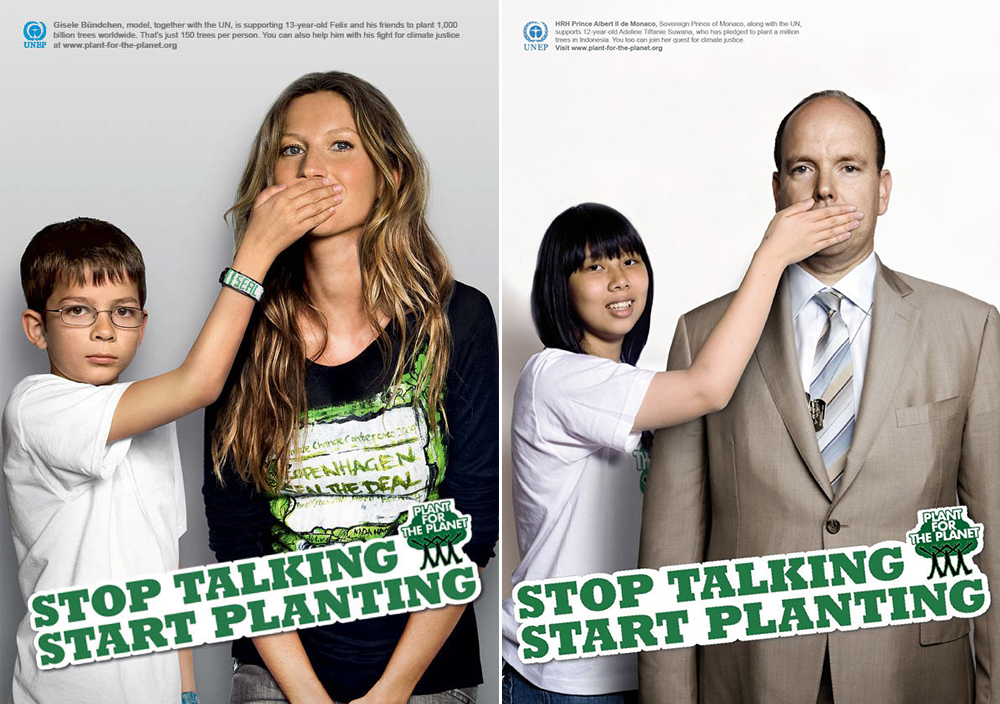 AMBASSADORS OF CLIMATE JUSTICE
From the outset, people who supported the development of Plant-for-the-Planet realized that in order to scale up the initiative, they would need lots of ‘Felixes’ doing the word-of-mouth work around the world. In 2008, the organization began holding Plant-for-the-Planet Academies, which have now reached more than 67,000 children from 66 different countries.

Each academy is a one-day workshop, during which kids train other kids to take action. At the end of the day, participants are granted certificates dubbing them “Climate Justice Ambassadors.”

The group is now working to reach its new goal of 1 trillion trees in the next 20 or 30 years. This is the number researchers estimate will be needed to restore devastated forests, offset global CO2 emissions and recover an atmosphere that can restore the balance of life on Earth.

This mass tree planting is a kind of savings account that will provide lifelong resources for future generations. The way to get there, as Finkbeiner explains, is to strengthen people’s sense of climate fairness, the understanding that wealthy countries that emit more CO2 contribute to developing nations. “For us, planting projects in the global south are most important. People in the north can help to fund those projects. In the south, trees grow much faster than in the north. Furthermore, the planting projects can improve the local environment and of course provide jobs,” he says. 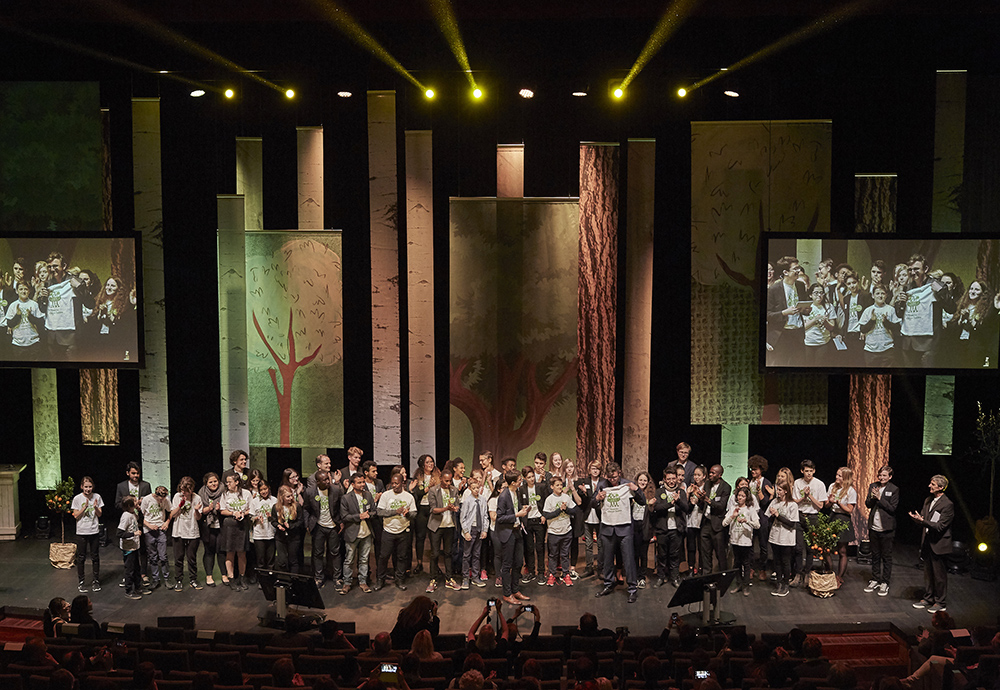 MINI FORESTS
An example of the local impact of the campaign can be seen at the Dr. Sócrates Brasileiro Municipal Elementary School (EMEF), in southern São Paulo. Next to the school building was a vacant lot used as a garbage dump and a meeting spot for drug dealers. Along with the students, the school administration decided to take action and create a mini forest there.

At the end of 2017, the lot was given to the school to be used for communities’ recreation and leisure. That same year, Plant-for-the-Planet organized a planting workshop with the students, supervised by the forest engineer Renato Mendes, from Árvores na Cidade (Trees in the City).

Mendes says they selected seedlings of native Atlantic Forest species. Many are edible and attractive to birds and small mammals. “In addition to providing shade and shelter for these animals, the forest is productive and will have astonishing flowers throughout year, enchanting the neighborhood,” says the engineer. More than 350 seedlings and 170 seeds were planted in the 500 m² (5382 square feet) area. “Children and teenagers start facing the world differently when they understand that everyone can make a difference,” says Sandra Martire Carvalho, the art teacher at the school.

In mid-April 2018, four months after planting, Believe.Earth visited the EMEF to see the forest and meet its guardians. “It will be the most beautiful and pleasant place ever,” says Caio Xavier Santana, 14, a student at the EMEF. “Our neighborhood has little green. Now, people are going to get a chance to get to know the plants and live with them.”

For Eliseu Muzel, a teacher and coordinator at the school, the participation of the young people has important results not only for the environment, but for their own development. “Students begin to build a sense of identity, belonging and ownership in relation to the public place,” he says. 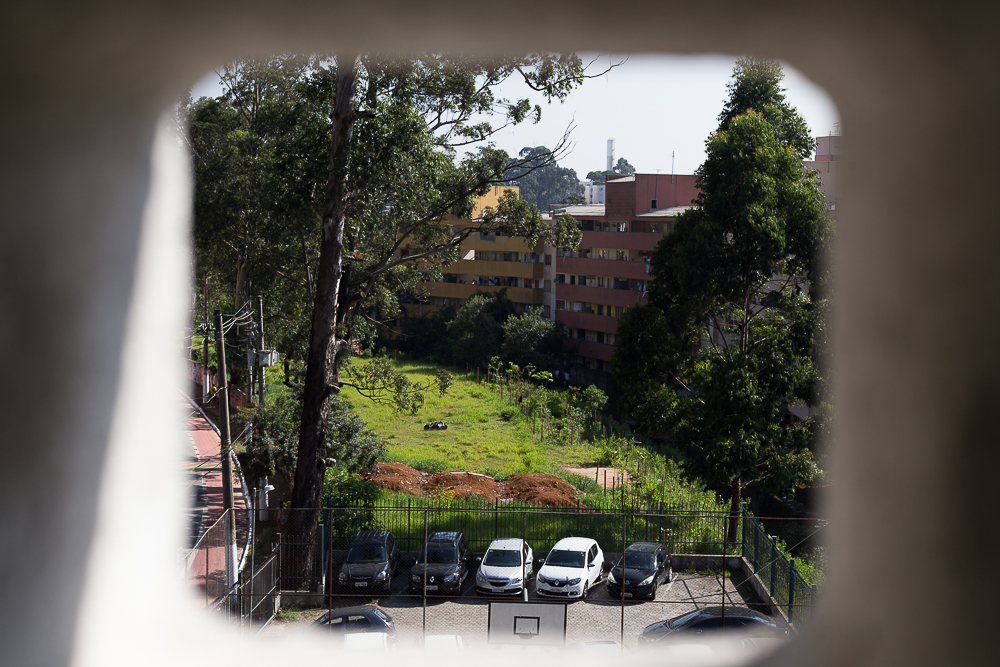 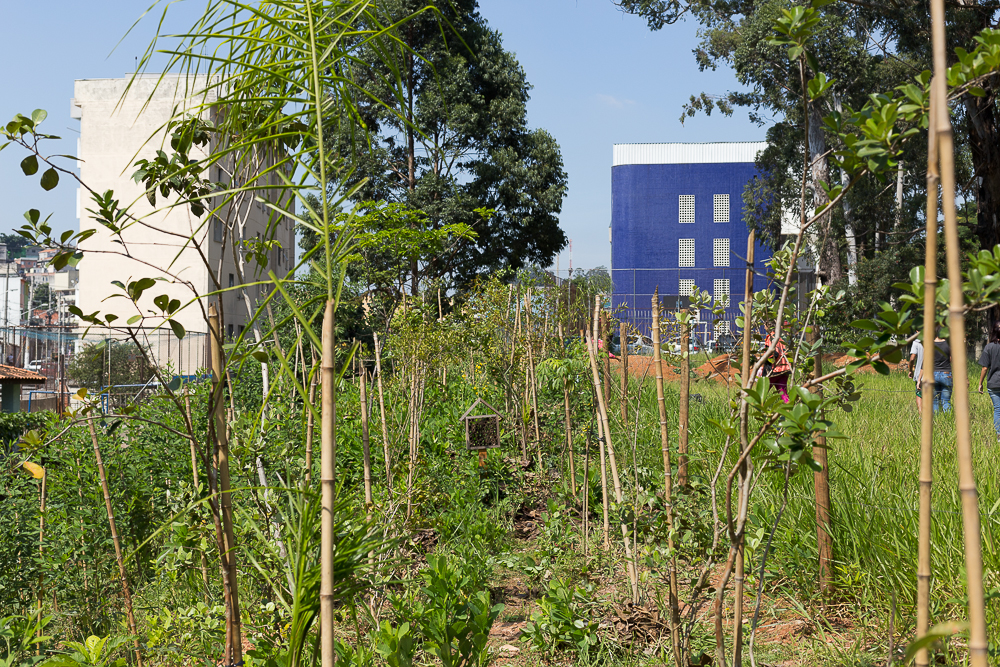 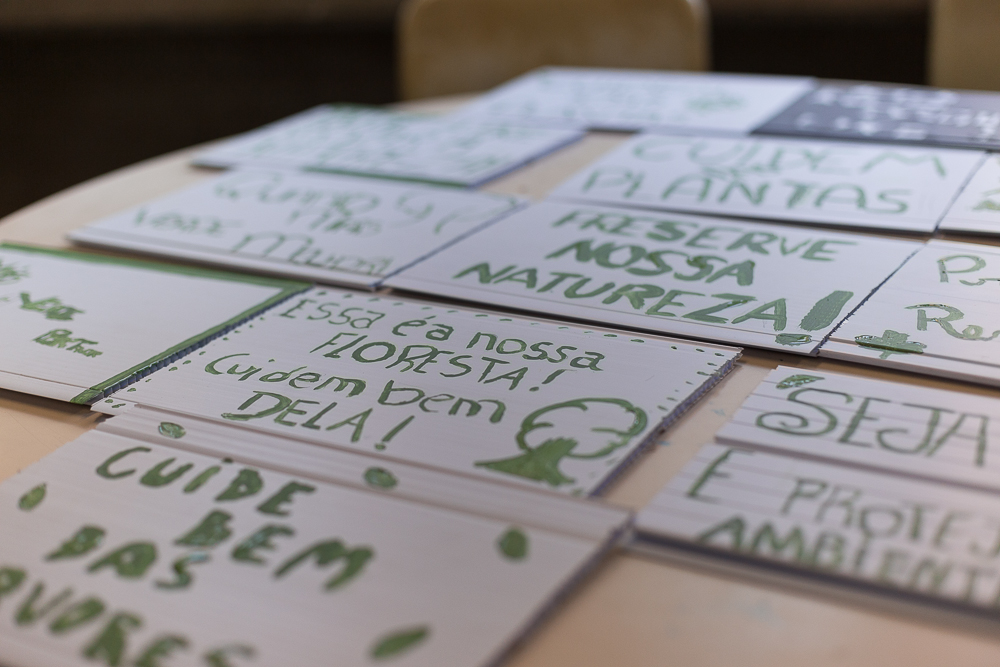 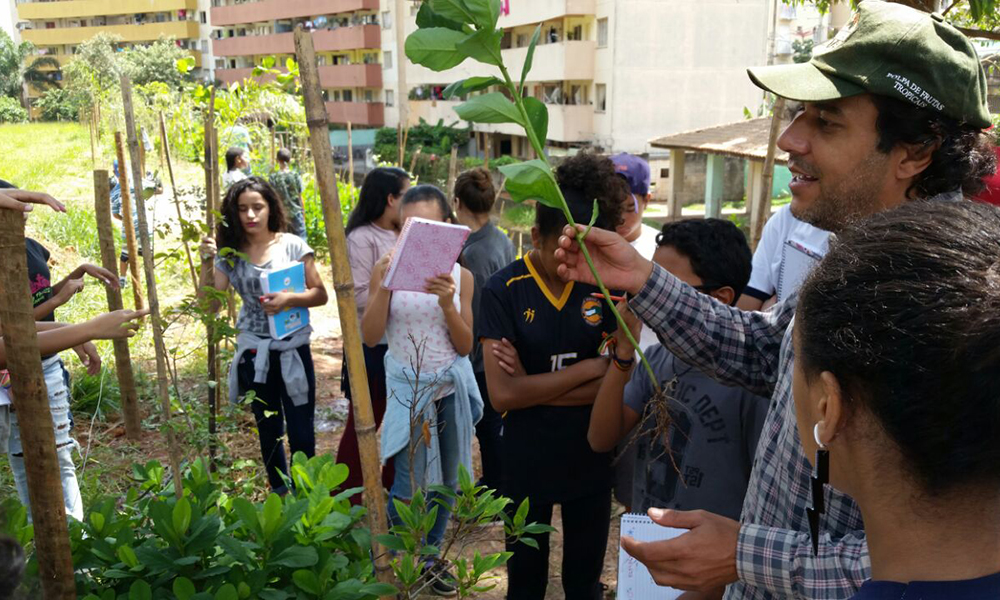 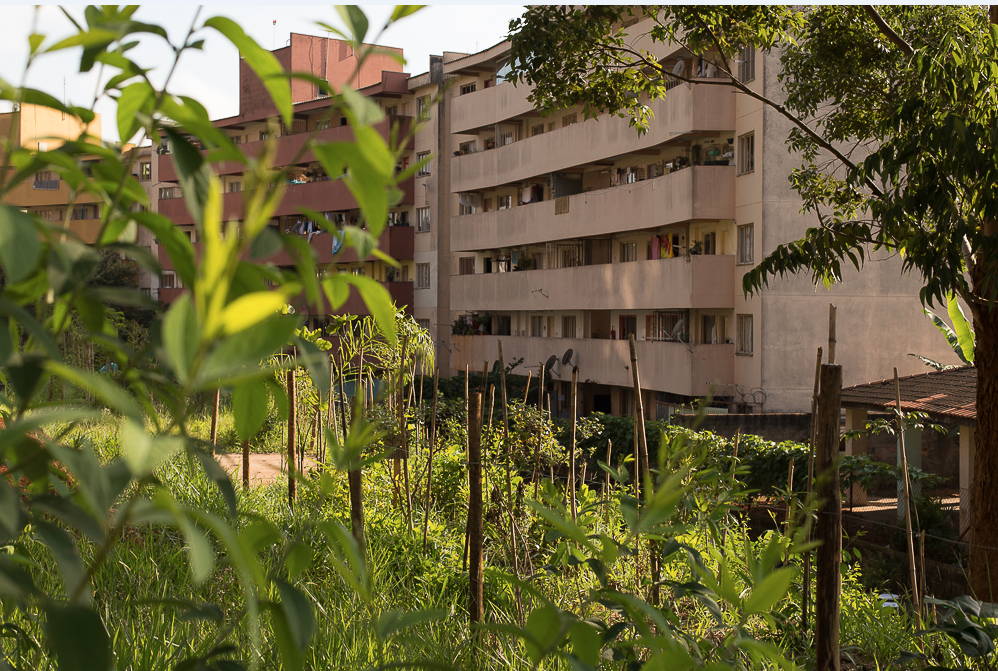 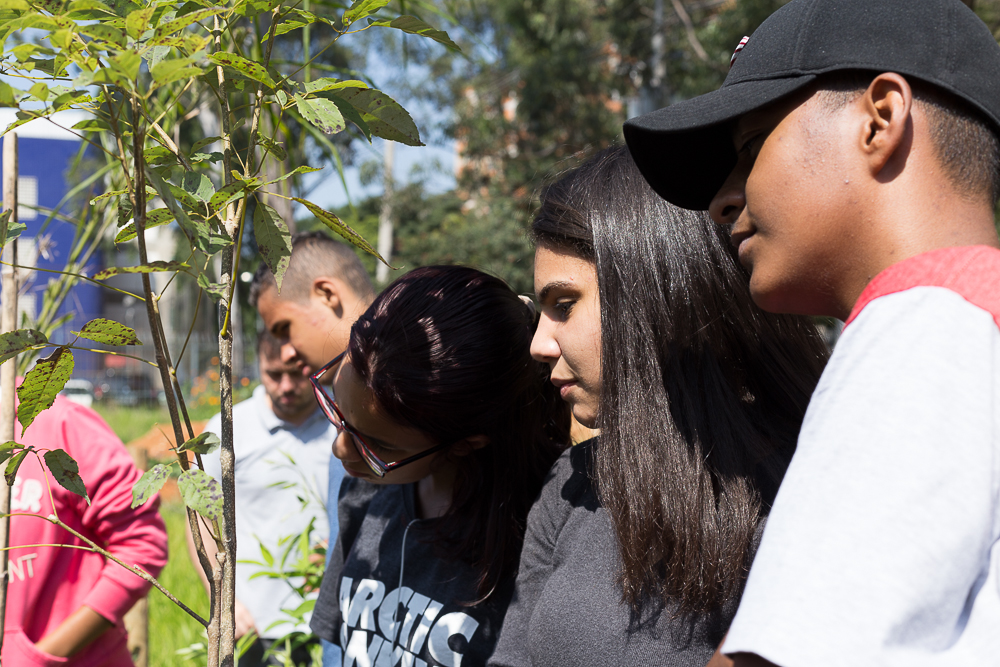 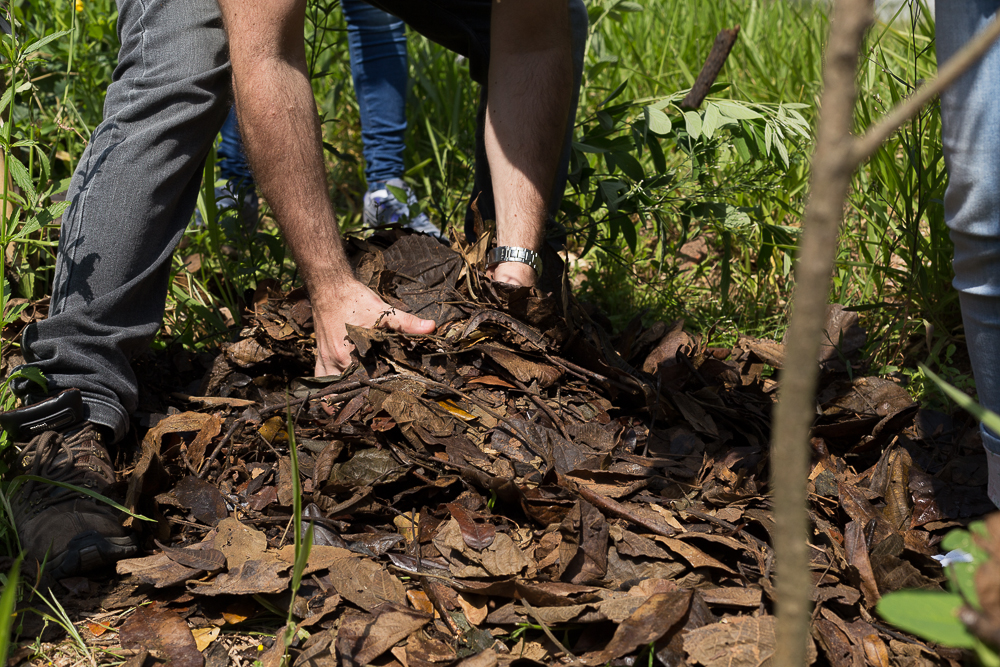 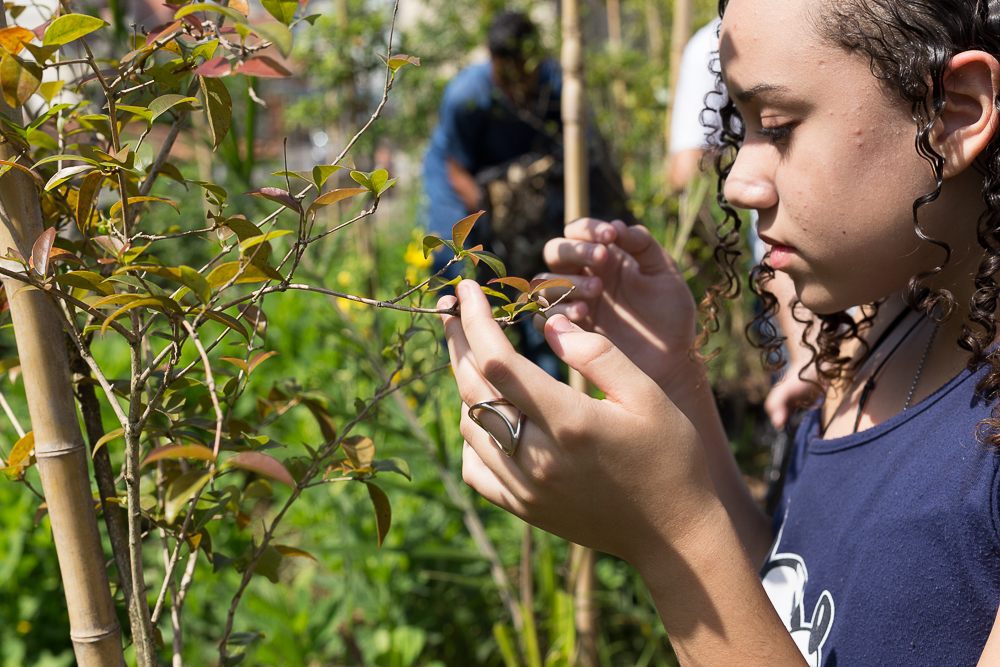 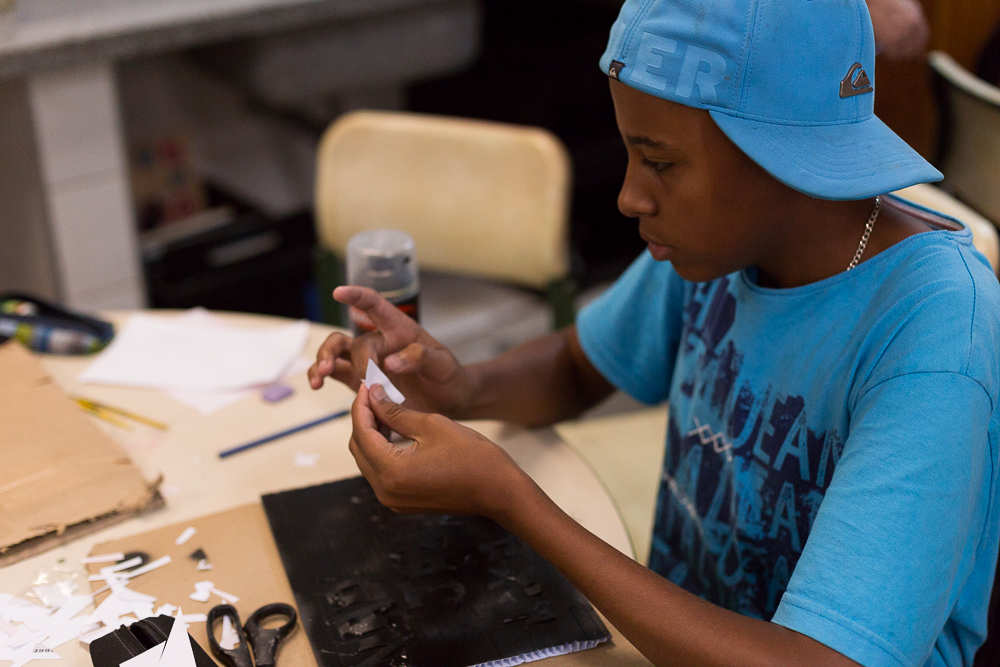 A student creates a poster urging community members not to dump trash in the mini forest (Diego da Silveira | Believe.Earth) 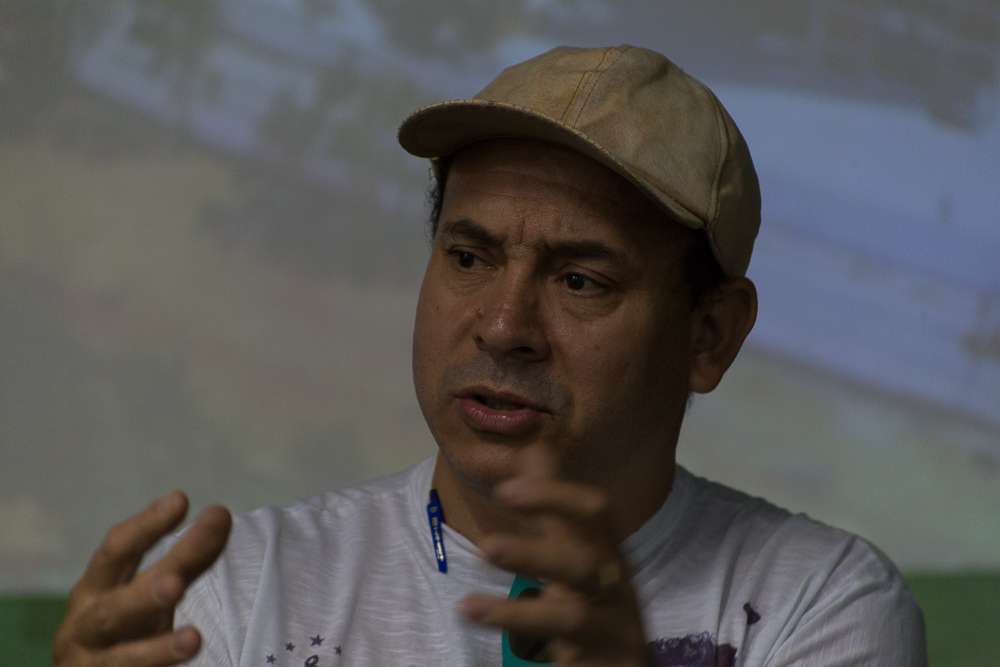 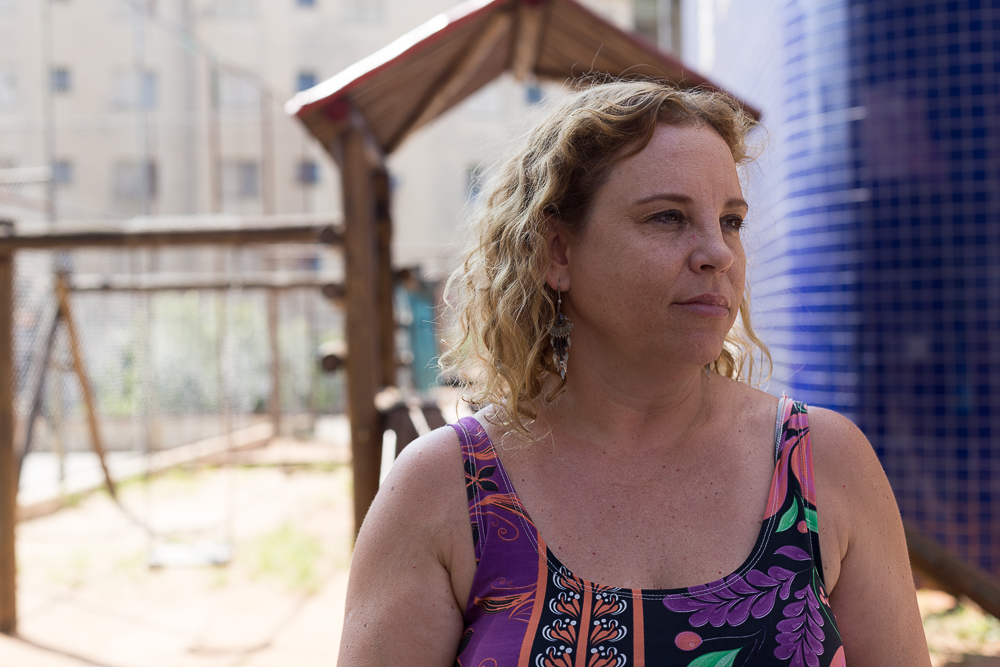 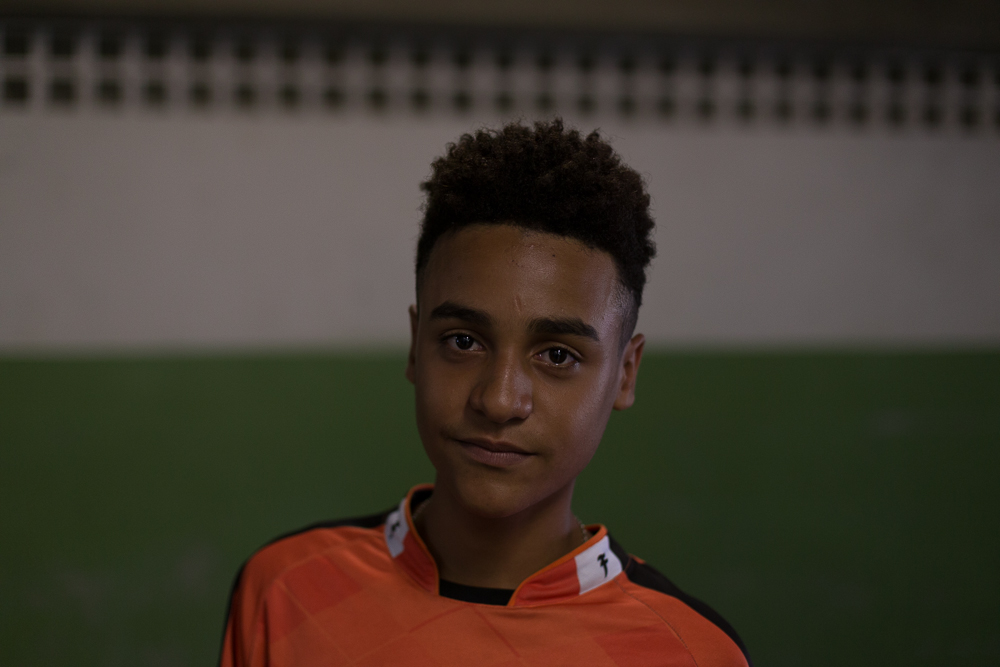 Caio Xavier Santana, 14, a student at the school, says: “It will be the most beautiful place” (Diego da Silveira | Believe.Earth)