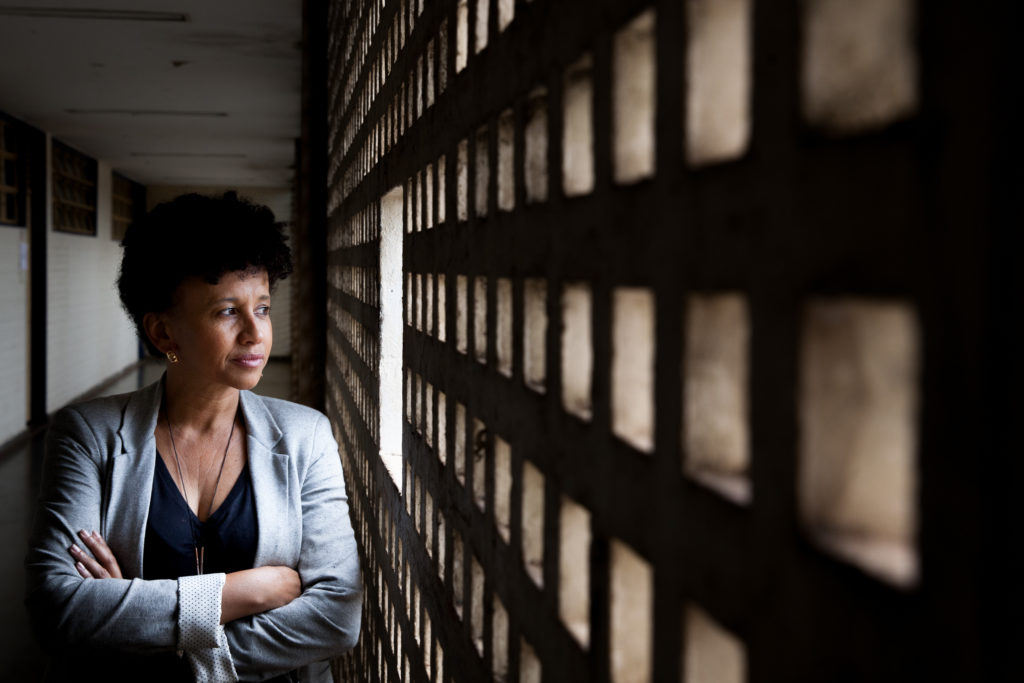 Gina Ponte, a teacher in the Federal District, is the creator of the educational project "Mulheres Inspiradoras" (Inspiring Women) (Janine Moraes Rocha/Believe.Earth)

Seeing that her public-school students in Ceilândia, in the periphery of Brazil’s Federal District, had, as female role models, celebrities valued only for their looks, teacher Gina Vieira Ponte, 46, decided to change the sources of her girls’ inspiration. “There’s nothing wrong with being beautiful, as long as you understand that this cannot be the only role women play in society, because it reduces them to sexual objects,” she says.

That was how, in 2014, she created the Mulheres Inspiradoras (Inspiring Women) project, which invited students of both genders to research the lives of well-known personalities, such as writer Carolina de Jesus and activists Malala Yousafzai and Rosa Parks, as well as inspiring women of their own acquaintance. “We combine well-known and anonymous lives to show that anyone – white, black, from the periphery – can build a great story,” she says.

The work became a book in 2016. “After the project, the most exciting thing was hearing that some of the women we portrayed re-evaluated their lives, knowing now that they are inspiring,”  says the teacher. “They are women who hadn’t been valued, who are making a silent revolution.”

That same year, the Latin American Development Bank helped broaden the initiative’s reach. Since then, Mulheres Inspiradoras has engaged more than 3,000 students in 17 public schools and trained 40 teachers in the Federal District. “In 2018, we want to strengthen the project so that it turns into public policy,” says Ponte. In this interview, she tells Believe.Earth how education changed her story, and who the inspiring woman in her life is. Gina Ponte: “No matter white, black, or from the periphery, any woman can build a great history” (Janine Moraes Rocha/Believe.Earth)

Believe.Earth (BE) – Why do you say that education was a major factor in your story?

Gina Ponte (GP) – My story is similar to of some Brazilians: My father was illiterate and worked as a street vendor, my mother was a maid and only studied until fourth grade. She was born in a rural area and unable to attend school. Because they did not have this opportunity, my parents introduced education to their children as something outstanding, something that would change our history, and make us better.

We were six children. Despite a lot of poverty, having to share an egg for everyone, my parents gave us unrestricted and unconditional support to attend school. When I was young, it was common to see children drop out of school to work as housekeepers, babysitters, or in other low-profile jobs.

BE – Have you faced problems at school?
GP – Yes. I started studying when I was 7 at a public school where the sons of both rich and poor studied. Many children already knew how to read, but I had serious difficulties learning and this was a source of great shame. I pretended to read, by memorizing the text. This also happened because I began school already damaged by racism. I was a frightened child with low self-esteem. I went to the second grade of elementary school [in 1983] without knowing how to read. That year, I met teacher Creusa Pereira dos Santos, who, despite my efforts to be invisible, used to call me to her desk. I thought she was going to chew me out, but she was extremely affectionate, putting me on her lap. She struggled to help me learn. It was the first time someone looked at me with credibility.

I was on teacher Creusa’s lap when I made up my mind to become a teacher. I thought, I do not want to be invisible. I want to be a teacher, because there could be nothing more interesting in life than doing for other children what she did for me. It was a watershed in my life. Later, I taught my three younger siblings playing school. They were my first students.

BE – Were you the first in your family to get a college degree?
GP – I was the first to get into the university, to apply and take the exam for a public-sector job, and to begin graduate study. At that time, unlike today, there were no public policies favoring the entrance of a person in a situation like mine. The rumors kept me from thinking about entering a public university. I used to hear that the University of Brasília was neither for blacks nor poor people. I didn’t even take the entrance exam there. But I got a spot at the private university. I used to work in the morning and evening and study in the afternoon. It was a huge challenge, but I needed to keep on studying: I was in love with the school and I realized that my college education was also important for my mother and would set an example for my brothers.

BE – How was your first experience as a teacher?
GP – I started when I was 19. A recurring practice is to give beginners the “tough” students. I did not really know what I was doing. The children were between 7 to 14, some from the countryside. I knew I would not have another chance to meet those boys and girls, so I started teaching with all my heart. I created my own method for each one, giving individual attention. I got some results, because I sought answers tirelessly. But I had lonely years. Teachers still need lots of support in Brazil.

After 8 years, I wanted to experience what it was like to work with teenagers. I started teaching sixth grade and it was chaos. I tried to teach, but no one listened to me. It triggered something in me: I developed a severe psychic illness and I had to be on leave for almost a year and be under the care of a psychiatrist. In therapy, I found out that I had wanted to be a teacher to be a change agent, so that my students could have a better future. When I realized I could not do that, and saw that kids were dropping out of school, I got sick. 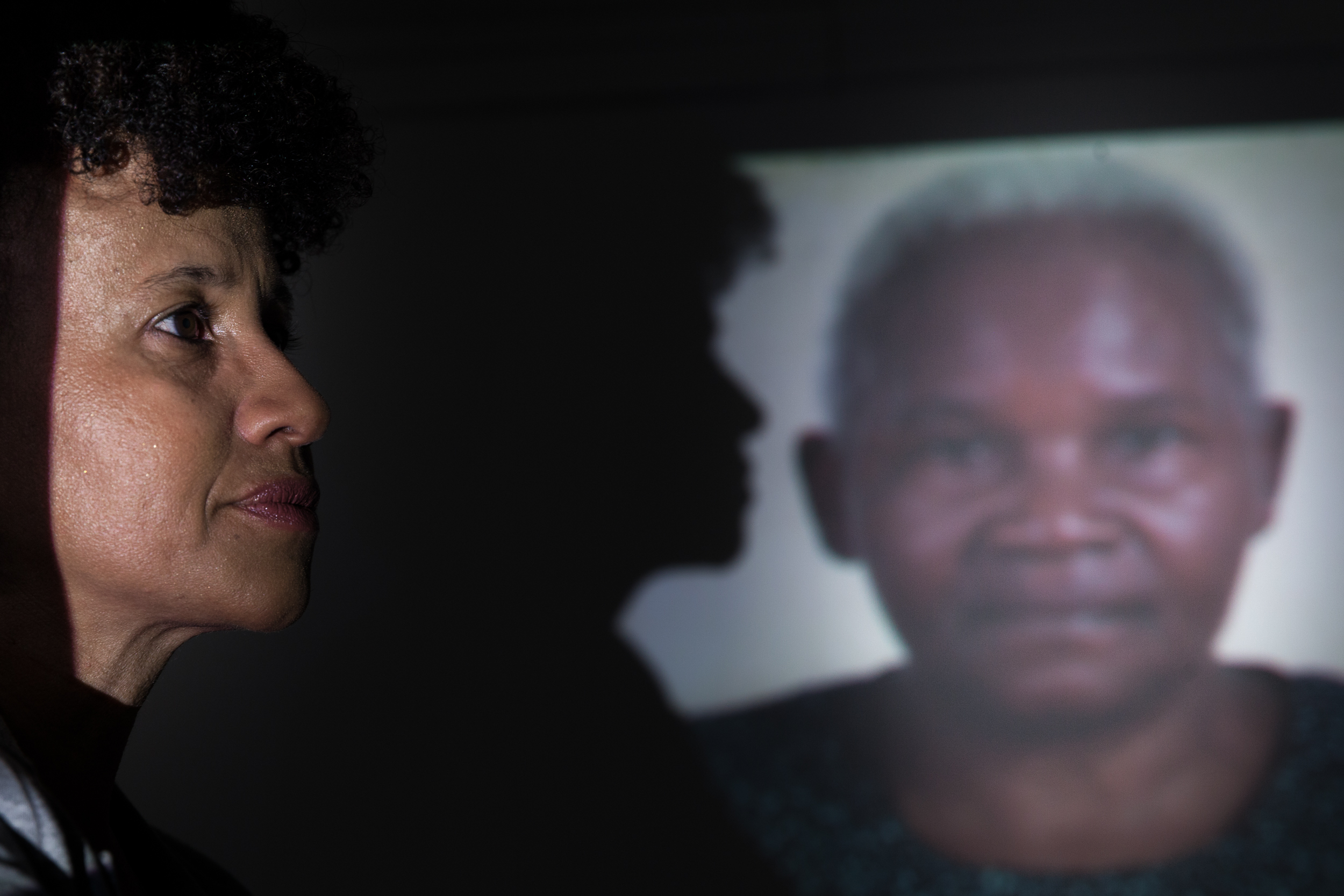 Ponte, with her mother’s picture in the background (Janine Moraes Rocha/Believe.Earth) 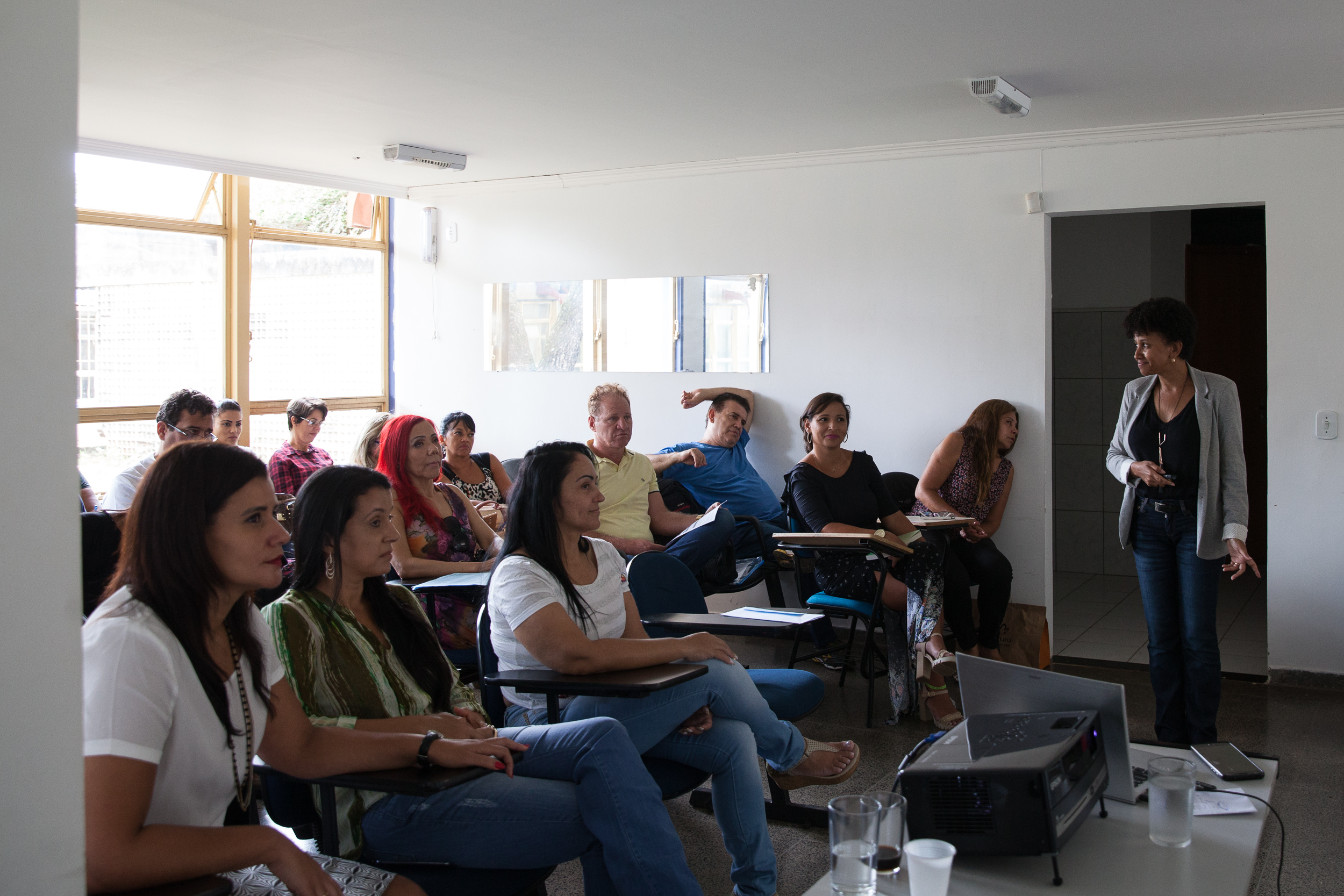 Ponte gives a lecture at Center for the Improvement of Education Professionals – EAPE, in the Federal District, for teachers working in the prison system (Janine Moraes Rocha/Believe.Earth) 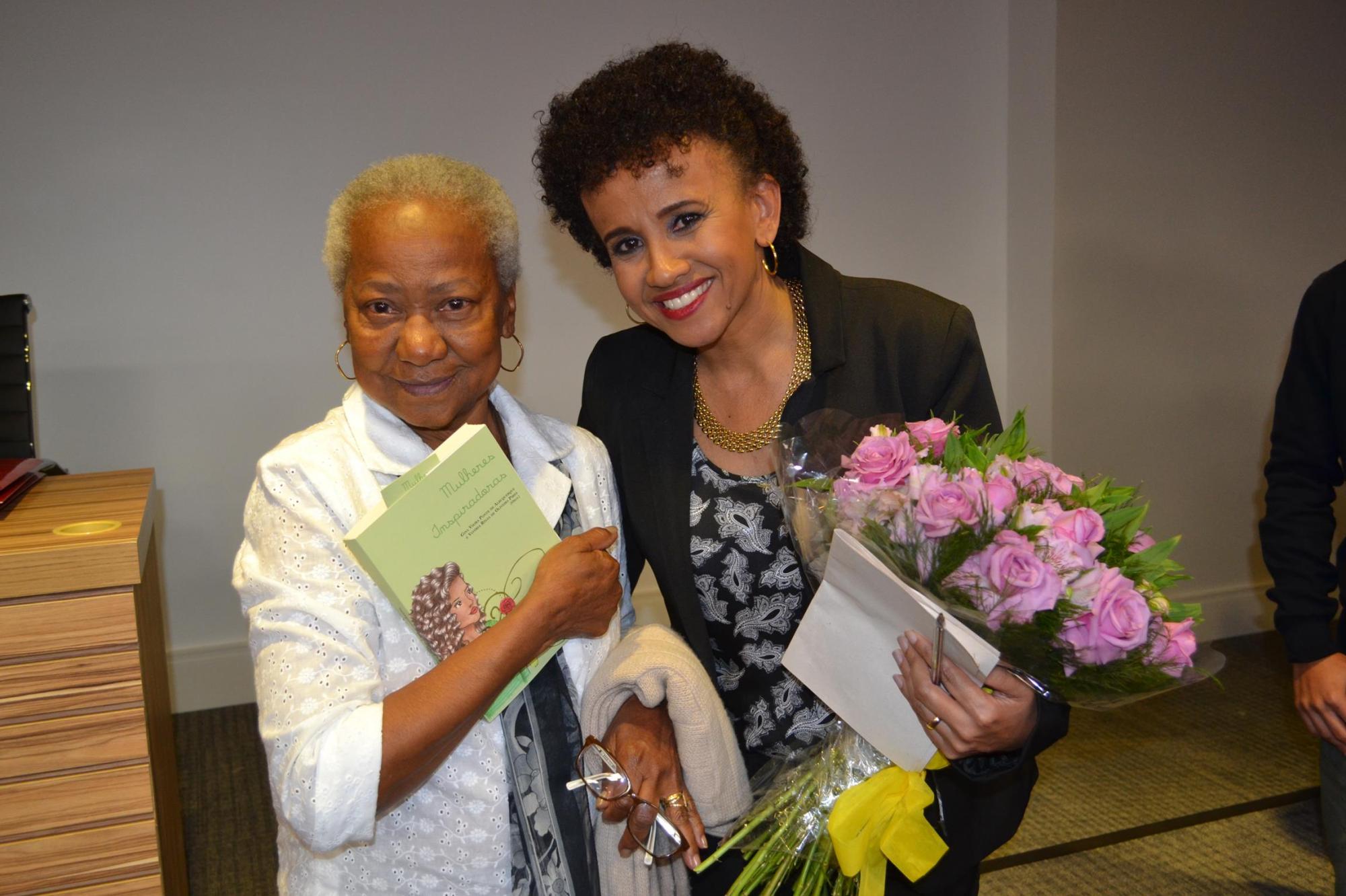 BE – How did you turn those years of helplessness into an inspiring project?
GP – By changing my way of working. I started studying hard to understand that a young person turns his back on school because the school first turned its back on him. I was imposing on students an educational model that made sense to me, but their world offers different perspectives, due to technologies, for instance. I realized that I needed to change as a teacher. I created an account on a social network, it was Orkut, at that time, and I changed my classroom approach, proposing more projects, more teamwork. I started giving fewer lectures and more readings.

I searched for women who were presented as icons, whether for children or adults, and found that they were highly sexualized. This sends the message that the most important thing is to be beautiful, hot and wanted by a man. There’s nothing wrong with being beautiful, as long as you understand that this cannot be the only role women play in society, because it reduces them to sexual objects. My goal was to help girls to look to other sources of inspiration.

BE – Why did you decide to encourage student research not only on known but also anonymous women?
GP – To show that any woman – white, black, or from the periphery – can build a great story. I introduced them to the trajectories of countless women, such as Carolina de Jesus and Rosa Parks, who, even with almost no schooling, did incredible things. After the students studied the biographies of these personalities and read works by female authors, I brought four inspiring women from our Ceilândia community to the classroom. And I asked them to name a woman who had inspired them. Some chose their mother, others their grandmother or great-grandmother. We wrote the interview script together, for each one. The students were euphoric about the reports and I asked them to write about what they had heard from these women.

BE – How do boys respond to being assigned to look for inspiring women?
GP – I did not present the project as a feminist one, because I realized that the representations of feminism they had received were very negative. There was some resistance at first, but much more to the model of learning than to the idea of the inspiring woman. This is because this model subverts the logic of the traditional school, which places students in a condition of passivity, in which they copy and repeat. Being a protagonist involves a lot more effort. But at the end of the process, it struck me how surprised they were to meet these women. We have a culture that buries the great achievements of women, so these boys were delighted, they became fans of the women they interviewed.

Many of the women were taken away from school to be exploited in child labor, abused, expelled from home for being pregnant. These are very strong stories of great resilience and courage. I found this material very precious. So, we turned it into a book. After the project, the most exciting thing was hearing that some of the women we portrayed re-evaluated their lives, and now know that they are inspiring. They are women who hadn’t been valued, who are making a silent revolution [trembling voice]. I’m very moved even speaking about this. They are women like my mother, who need recognition and appreciation. Ponte holds a copy of the book “Mulheres Inspiradoras”, a collection of reports made by students in the classroom (Janine Moraes Rocha/Believe.Earth)

BE – Who is the inspiring woman in your life?
GP – My mother is my greatest inspiration. I’m always touched when I remember her. She came from the interior of Minas Gerais with nothing, when Brasília [Brazil’s federal capital city, constructed in the late 1950s and early 60s] was first being built. She was an extraordinary and upright woman, hardworking. She knew how to make do on little money, as she used to sew, and keep a garden, all to complement her household budget. She was the first feminist in my life: She never encouraged me to think that a man would be my greatest life project.

In my childhood, the violation of girls’ rights was clearly identified as such. I experienced situations in which I might have been sexually abused, but as my mother talked to me about everything, I knew that was wrong and could defend myself. She taught me to be the owner of my own story.