Inventor of a garbage compressing system that neither smells nor pollutes soil or air, this Colombian environmentalist defies science 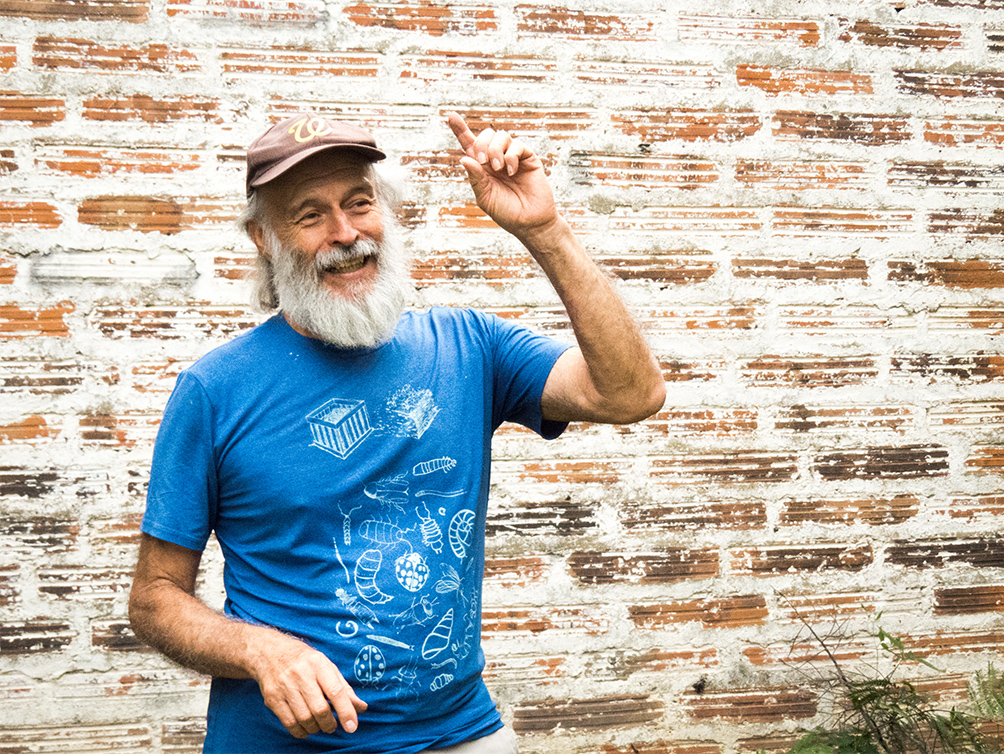 Forty years ago, Guillermo Silva Pérez realized that the best way to process organic garbage is to compress it in bundles and then walking on top of it. He drew his inspiration from the woods, where waste is naturally absorbed without saturating the air with its rotten smell: “the forest has a lovely scent,” he says. Guillermo designed the so-called Pacas Digestoras Silva (Silva Digester Bundles), digester bundles that do not have an odor or contaminate the environment.

“You know they are sufficiently compressed when you’re walking on the waste — not through it,” he says, while walking energetically on top of a recycled wooden box where he had just dumped decomposing waste and two wheelbarrows full of grass and leaves. Just like magic, the putrid air dissipates when all the material in the box is compressed. The waste, now clean and healthy for nature, becomes part of the garden.

The bundles do not let the waste rot; instead, it ferments. Due to the compression, inside that structure there is a very little oxygen; this promotes the cultivation of anaerobic microorganisms and decomposer insects that gain energy from the waste, promoting pollution-free decomposition.

It is possible to create digester bales solely using garden waste, but not with just food waste (Valeria Zapata / Believe.Earth)

In a one-cubic-meter Paca digester it is possible to process half a ton of organic garbage, which is, in six months, transformed into 330 lbs. of fertilizer. What is left becomes carbon dioxide, which is, once again, absorbed by plants and transformed into carbohydrate and oxygen. The process prevents the emission of pollutant gases into the atmosphere, such as methane, ammonia and hydrogen sulfide.

Perez explains that methane conversion does not occur in the digester because the alcohol and the vinegar generated inside the bundle evaporate. As well,  while a typical composting process would be generate ammonia from waste overheating, in the digester, this does not occur because its small volume does not permit the contents to reach high temperatures. “The highest temperature inside is 140°F and the process does not take more than a day,” he states. “Hydrogen sulfide, known as foul gas, needs organic matter saturated with water to be produced, but there is never too much water in the compressed waste, so there is no gas.”

A LIFE DEVOTED TO RECYCLING
Perez lives in Medellín, Colombia, and has devoted more than half of his 65 years to the management of organic waste. His quest began in 1977 when he saw a worker dealing with an organic trash heap. Each movement of the worker’s shovel created a cloud of putrefaction filled with flies. Wanting to dignify that job and find a clean way for workers to handle that material, Perez decided to use his expertise as an environmental technician to work out a solution. In a one-cubic-meter digester bale it is possible to process half a ton of organic garbage (Valeria Zapata / Believe.Earth)

Nowadays, he lives in an old farm in the urban area of Medellín, with extensive gardens, including an organic community garden where he builds bundles full of life, with foliage and flowers sprouting and hundreds of insects and earthworms living inside, helping the organic material decompose.

The scent of forest that emanates from these structures attracts people to sit on them. Not a single visitor imagines that each one is made of 1,102 lbs. of decomposing waste. In the middle of the garden a new bundle begins to take shape with its recycled wood planks tied together. There is no base or lid, just four planks 3.2 feet wide and 1.3 foot high.

For Perez, this is a full-time passion. He has never married and does not have children. He never wanted to be a father as he thinks there are enough people on the planet, and he adds, laughing: “If a woman wants to marry me she must be crazy, and I won’t marry a crazy person.”

WHAT BOOKS DO NOT TEACH
The first digester bale was created in 1989. Since then, many people have rejected the project. Once, in an agroecological event, when Perez was demonstrating how the Pacas work, the organizers removed him from the project after observing how he piled and compressed the garbage. “I was accused of violating the garbage management norms,” he states. “I tried to explain, but I didn’t know exactly what was going on inside the bundle. However, I was pretty sure it was clean — and, for me, that was enough.” Perez believes that a civic ethic will take over public spaces, such as parks and green areas, with digester bales processing organic waste produced in people’s houses (Valeria Zapata / Believe.Earth)

There are few scientific articles exploring the benefits of the digester bale. Therefore, human senses are the true reviewers of the process. “Why has our education suppressed our ability as observers?” Guillermo asks. “Those professionals who deal with waste know nothing about observation. They need a book. Well, as the indigenous people from Sierra Nevada de Santa Marta say,  ‘Mother Nature gave us knowledge and memory — and for the civilized man she brought a tiny book.’”

The lack of scientific validation, according to Guillermo, is one of the reasons why he has not received support from any authority figure in Colombia for all these years. He has, however, received support from ordinary people, by word of mouth. A year ago, one of Perez’s nieces created a profile of this initiative on Facebook and he began to make contact with people interested in the Pacas Digestoras Silva. A NEVER-ENDING STORY
The first meaningful Paca project began with a partnership with the Conquistadores school, in Medellín, in 2008. From then on, Perez approached the project of  educating the public about his method with more zeal, attracting the attention of other enthusiasts of healthy organic recycling, who have taken this idea to Mexico, Spain, Argentina and Uruguay.

Guillermo did not patent his creation. “Patenting is allowing someone to explore it exclusively, and I don’t want to do this by myself. I want thousands of people to embrace this idea.” When someone takes his concept and puts it into practice, adding to the invention new techniques that work, the Pacas Digestoras is kept alive. That is the reason why this story does not have an end. “We have to finish inventing it,” he states.