An activist challenges her nomadic community’s view of women, while mobilizing her people for survival in an increasingly arid climate 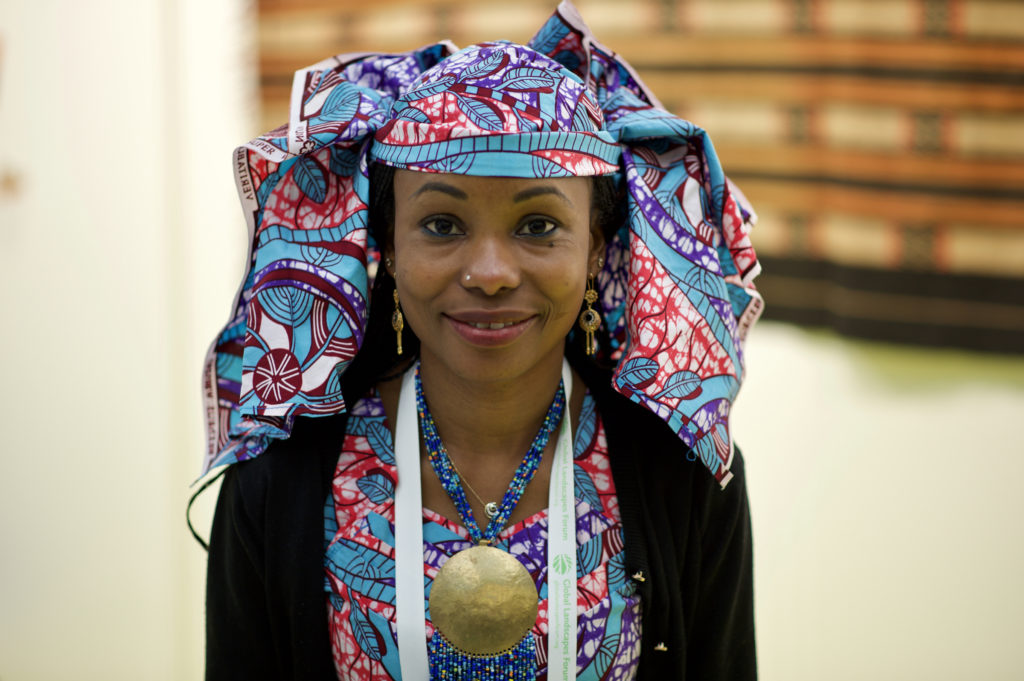 Hindou Oumarou Ibrahim, one of the founders of the Association of Indigenous Women and Peoples of Chad: "People gradually accepted me as a leader" (Pilar Valbuena/Global Landscapes Forum)

Hindou Oumarou Ibrahim, 33, is an indigenous woman of the Wodaabe, also called Mbororo, a pastoral people. Ibrahim is one of the founders of the Association of Indigenous Women and Peoples of Chad a group fighting to defend the environment and the rights of indigenous people. Ibrahim was chosen to represent civil society during the signing of the Paris Agreement in April 2016, when 175 world leaders gathered at United Nations headquarters in New York to make a global commitment to curbing climate change.

The Mbororo, which means “cattle herder”, are an ethnic subgroup of 250,000 members of the Fulani, the largest nomadic people in the world, inhabitants of central and western Africa. In Mbororo culture, few girls are allowed to study. But Ibrahim’s parents allowed her and her sisters to attend school in Chad’s capital. She is the third child in a family of five brothers and sisters.

Witnessing how climate change affects the life of her community, which survives from small-scale farming and cattle-raising in the arid Sahel area, in the southern part of the Sahara Desert, Ibrahim has challenged her own people, helping to raise awareness among her village’s elderly chiefs of the value of women’s advice, and to think together about how to adapt to adversity. “Every year, the rainy season gets shorter and the droughts are longer,” she says to an interview for Believe.Earth. “Cows have provided less milk every year.”

In 2013, she developed an innovative project in Chad that brought together 500 indigenous herders to map natural resources in the region. While men documented mountainous areas, rivers and places considered sacred, women mapped the springs. The project caught the attention of the national government, which began using the survey to inform public policy. “People gradually accepted me as a leader,” says Ibrahim. “I have been changing the way women are seen and treated in our communities.”

A member of the International Indigenous Peoples’ Forum on Climate Change (IIPFCC) and a of the Indigenous Peoples of Africa Coordinating Committee (IPACC), Hindou gave an interview to Believe.Earth during December’s Global Landscapes Forum (GLF) in Bonn, Germany, where she spoke about community management of natural resources. 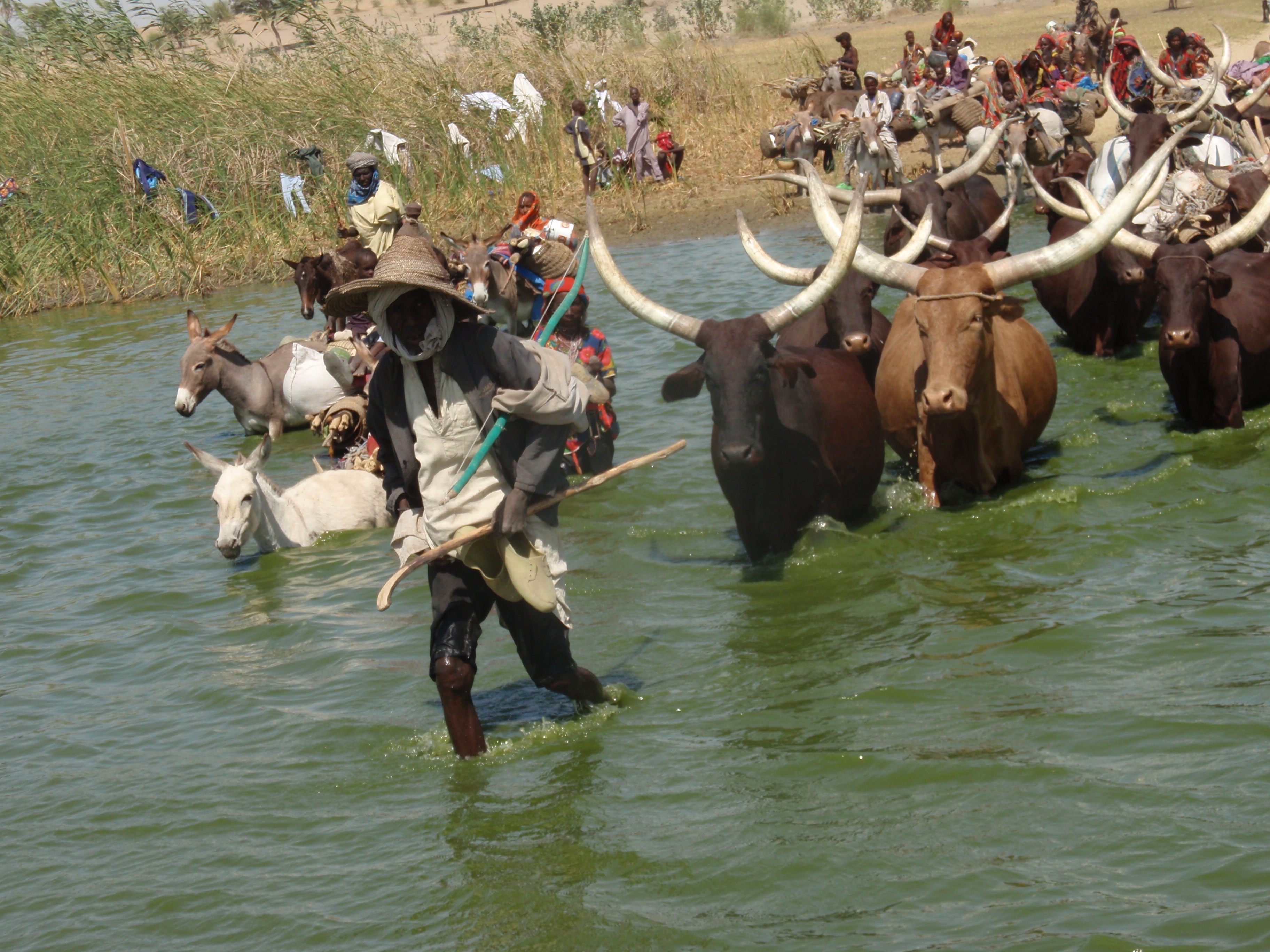 Mbororo people crossing a lake with cattle, towards the next camp. They travel long distances in the semi-arid African Sahel in the search of water (Hindou’s Personal Archive) 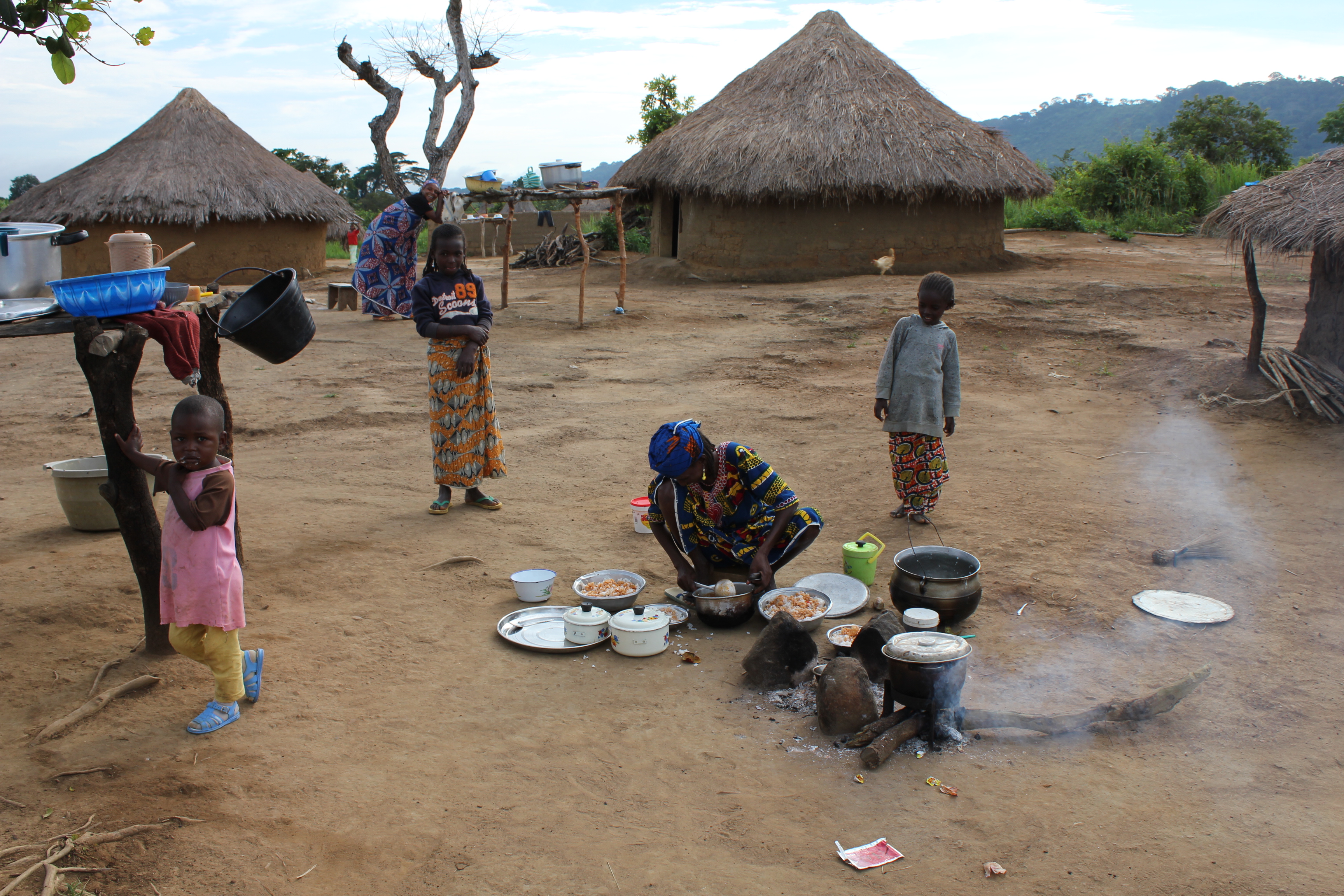 Women are responsible for cooking in Mbororo communities, which have no access to electricity or running water (Photo: Minority Voices) 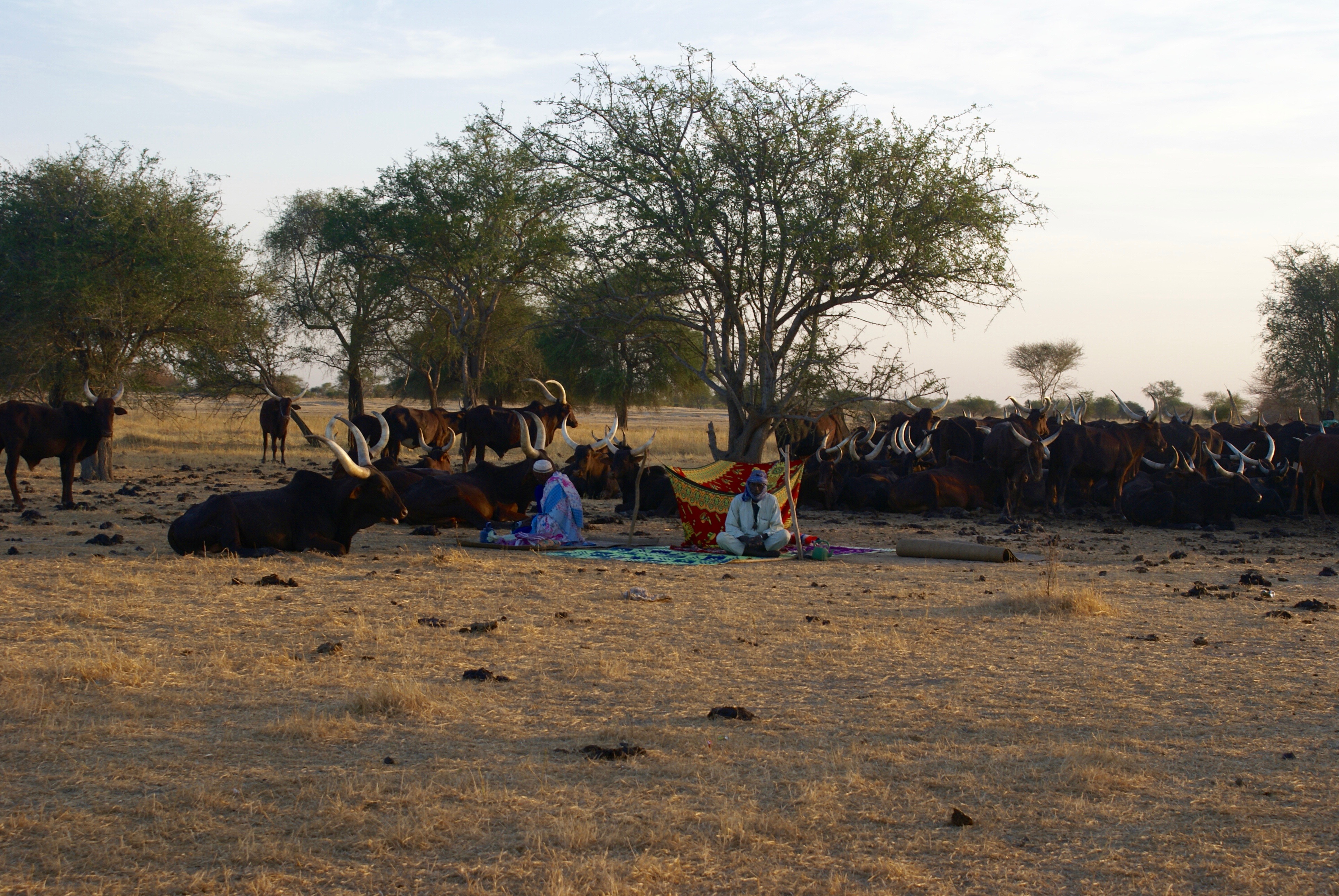 Two Mbororo men rest in the shade next to their cattle. A semi-nomadic people, the Mbororo’s survival depends on raising animals (Personal Archive/Hindou Oumarou)

Believe.Earth (BE) – How does climate change affect the life of the Mbororo?
Hindou Oumarou Ibrahim (HI) – We’ve noticed that it has been increasingly difficult to survive. Everything has become more and more difficult for my people. We spend less time in the places we go. Every two or three days, we must move again. The distances we travel are long. We’re about to walk two thousand kilometers (1.24 thousand miles) to get to our next destination. Whole families move, women with their young children as well. We’ve always done that. The difference is that now we must walk longer distances and many end up losing their cattle along the way. Climate change affects our lives in many ways, because the seasons have changed. The rainy season has been shorter each year and the droughts have been longer. Even in the rainy season, rain does not come on a regular basis. Sometimes in a single week it rains so much that it floods our lands, and the following week, the sun is high and there’s no rain at all. This impacts our food security.

BE – Have temperatures also changed?
HI – Yes. During the drought, temperatures are very high. In the summer, the temperature can reach 50ºC (122ºF). But, from November to February, considered a colder season, rains were supposed to come and the temperature used to range from 15º to 20ºC (59ºF to 68ºF). That’s now changed, with temperatures reaching close to 38ºC (101ºF). This rainy season has been reduced to no more than two months, December and sometimes January.

BE – What has changed in the social relationships of the Mbororo?
HI – Responsibilities end up changing. Women are overworked and work harder than men. They are responsible for milking, loading milk and producing food derived from it. But cows have been giving less and less milk. We used to milk two liters in the morning and two in the late afternoon. Nowadays, during drought, we can get only one liter every two days. During the rainy season, we milk every day, but not more than a liter. I’ve seen these changes since I was little; they’ve occured over the course of my lifetime.

BE – What cultural practices express your people’s way life and remain intact regardless of adversity?
HI – We have a traditional practice named pulaku: the care and respect we should have before someone who is older than we are. Another tradition is to be proud of being Mbororo. Pulaku cherishes respect, as well as helping preserve pride in our identity. It is something very particular to our culture. These are the two great principles of our cultural identity. We also have many dances and songs as part of Guérewol,  a time every year, at the end of the rainy season, when we organize a cultural event where women and men meet each other. Women choose their husbands. Many people come from very far away to take part in this.

Mbororo women, who are responsible for milking cows, report that climate change has led to a decrease in the milk production that feeds the community (Hindou’s Personal Archive) 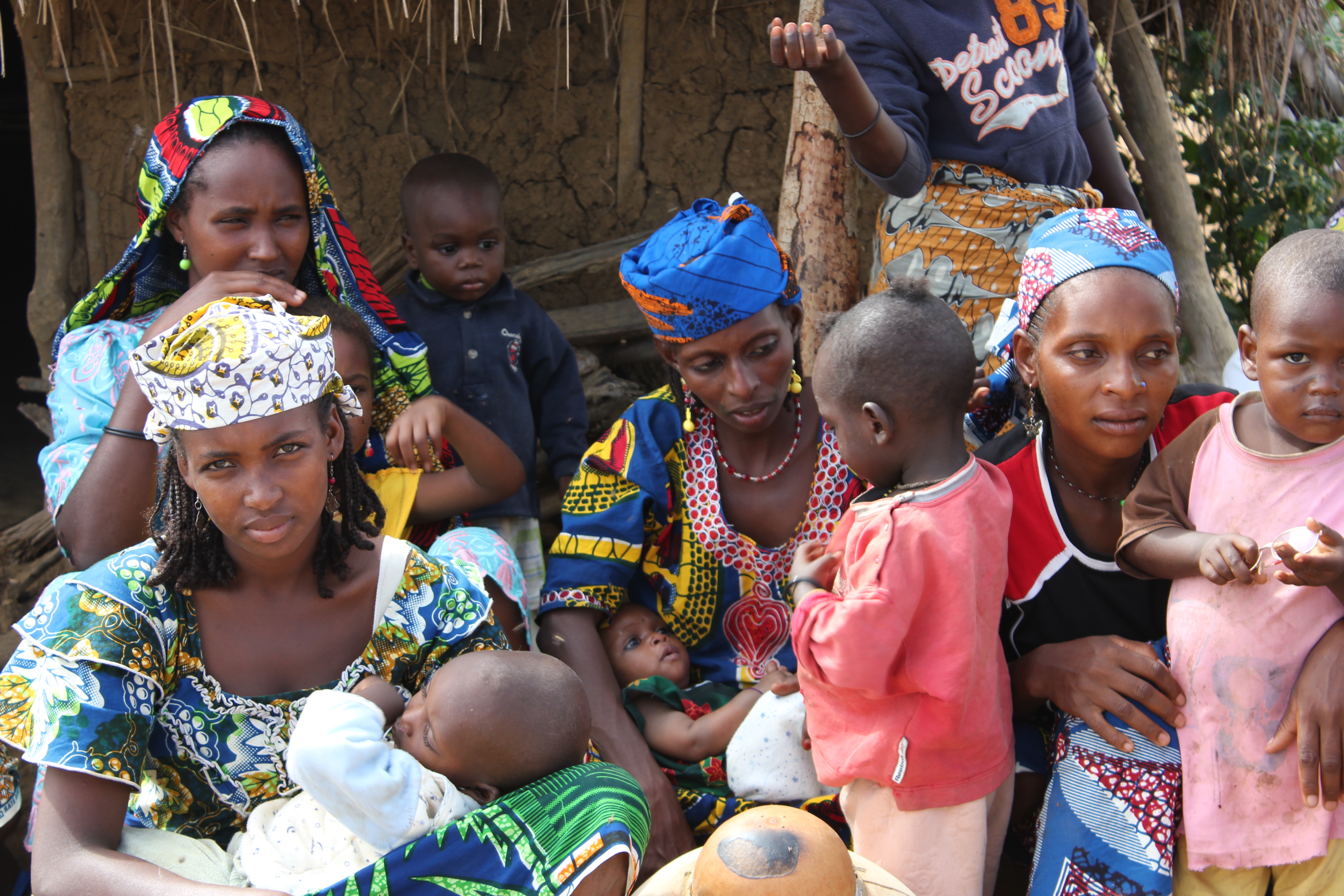 Mbororo women and children in Cameroon: Marriage and motherhood at an early age and life expectancy of 52 (Photo: Minority Voices) 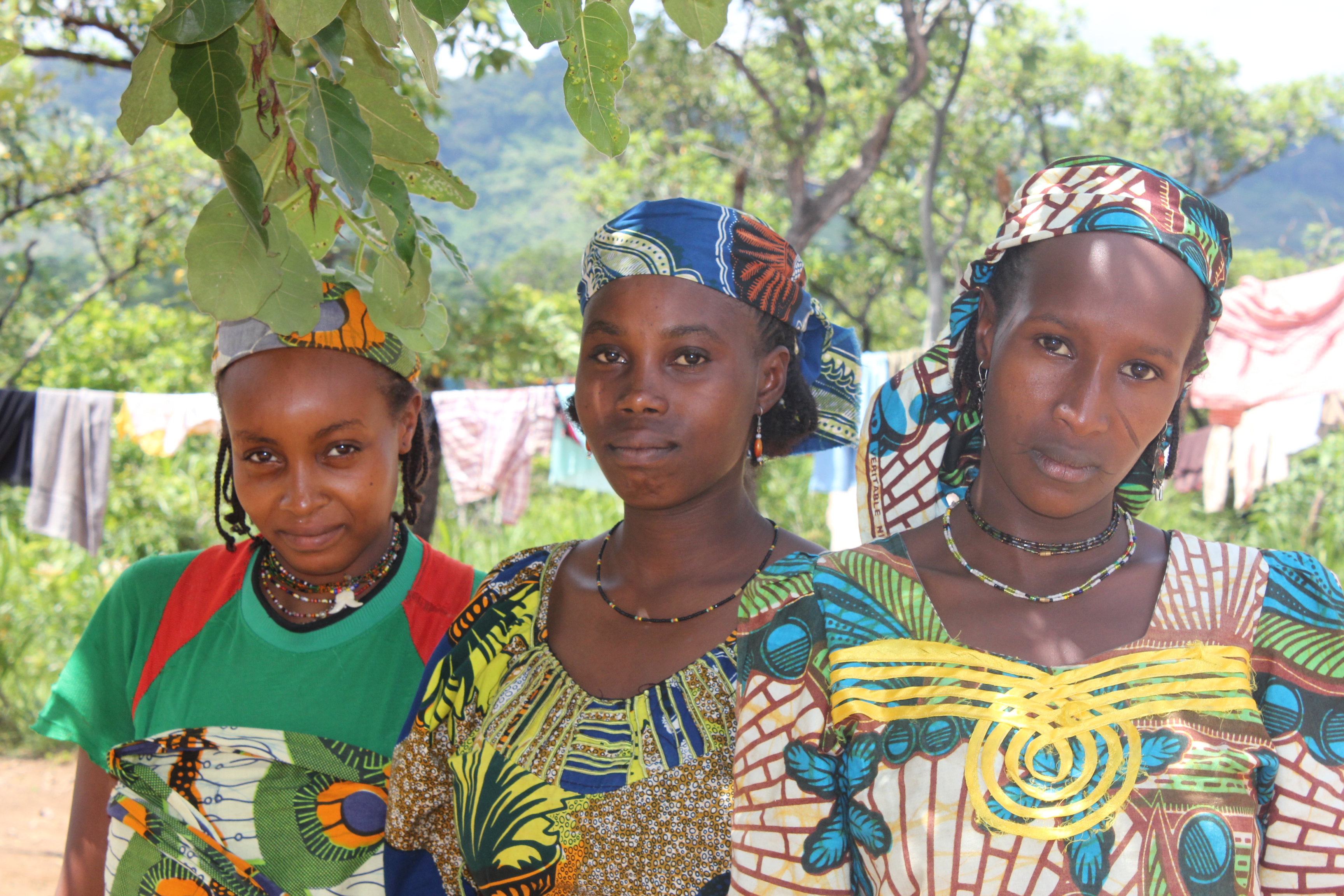 Women from the community are rarely allowed to go to school (Photo: Minority Voices)

BE – Why do you believe that being an indigenous woman in Africa is a double exclusion?
HI – Being a woman in Africa is a great challenge, because everything is guided by men, there is always male leadership. To be an indigenous woman is to be even more marginalized. You are placed in an inferior position and cannot make decisions. Besides, you have so much work to do. It is a great challenge for indigenous women to achieve a leadership role, to be able to speak and be heard by other members of the community.

BE – What did it take for you to be heard?
HI – It all started when I went to school in N’Djamena, the capital of Chad. My mom was the one responsible for sending me to school. She fought hard to give me this opportunity. She was challenged by my community, which is very discriminatory. They asked, “Are you going to send a girl to school?” She said, “Of course I’m going to send her to school. I couldn’t study, and I know the importance of school to my children.”

At school, I became interested in environmental issues and noticed the impacts of climate change on our people. I tried to talk to our indigenous leaders and show them the evidence of what we were living. My idea was to start helping. I went to the local government to demand schools for our communities because we never had any education for our children.

When the community noticed that the government was listening to us and building schools, they began to trust me. They gradually accepted me as a leader. Because of this, I have been changing the way women are seen and treated in our communities. Now, when we hold our meetings, women and men sit together in the same space and discuss problems. We never did this before. In many of our communities, girls still do not go to school and men are still the decision-makers. We are gradually changing that. Ibrahim during the signing ceremony of the Paris Agreement in April 2016, which was attended by more than fifty heads of state or government (Rick Bajornas/UN)

BE – How did the project of mapping out your community come about?
HI – In 2013, we mapped our community and its resources in a participatory way. Our group had an idea to put all our traditional knowledge in this survey. We brought men and women into the same space. The map translated and preserved our knowledge and passed it on to future generations. It was created in a participatory way so that we could manage and care for our natural resources. In addition, the map served as a basis for thinking about a plan to adapt to and mitigate the impacts of climate change. Draw the best ways to get to the water springs.

BE – What does it mean for you to make your people’s voice heard in international conferences?
HI – For me, it is not so difficult to connect these worlds. I know our local reality and I know how international decision-making works. My role is to talk about what is really going on and what I think should be done in these forums. I want to be able to contribute to better decisions being made, and to benefit people’s lives. In the case of the Paris agreement, we [indigenous people] tried to provide some models. In forums like [Global Landscapes], we have our own pavilion. As well, sometimes UN agencies want to partner with indigenous organizations. I feel that we still must defend the rights of indigenous people. Often, international leaders do not listen to us or give us the rights we deserve. We’ll keep fighting.