Education against stereotypes and discrimination begins in early childhood 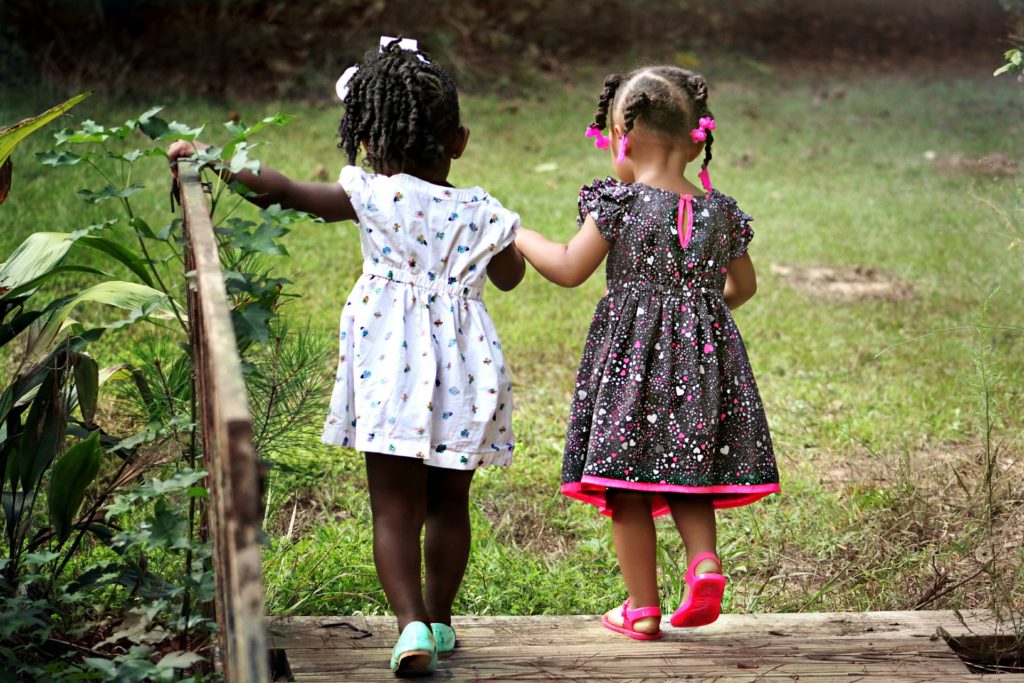 Girls and women deserve dignity and rights. But gender equality is also good for the global economy and the planet (Pixabay)

Imagine if the world had a global GDP increase of 3.9 percent, accompanied by a 59.6-gigaton decrease in carbon dioxide released into the atmosphere by 2050 and a 9.5 percent drop in infant mortality. Can you believe these numbers? These are some of the benefits that gender equality has to offer humanity, besides bringing dignity and human rights to half its population.

The global economy would be a clear winner. According to a survey released by the International Labor Organization, if inequality between men and women was reduced in labor market, the employment rate would increase and, consequently, global GDP.

Health is another area that would benefit from ending gender inequality. According to a study analyzing data from 219 countries, improving access to education for girls and women would reduce child mortality.

The environment would also have reason to be grateful if humanity offered equal opportunities to all. The Drawdown project, which mapped out 100 strategies for reducing climate change and its effects, has ranked girls’ education as the sixth most efficient way to reduce carbon pollution by 2050, with an “incalculable” return on investment.

According to Drawdown, girls and women with more access to education would be more aware of the importance of family planning, contributing, for example, to the reduction of population growth and consequently of global warming (Learn more about why gender equality is one of the solutions to the climate crisis in Believe.Earth’s report).

The UN, outlining its Sustainable Development Goals, lists gender equality as the fifth of 17 goals to achieve by 2030, with public policy recommendations to advance the agenda on a grand scale. But individual actions have enormous potential for change.

According to experts, small actions such as exposing children to non-stereotypical characters found in books and movies, or dividing housework equally at home, can redefine behavior patterns for this and the next generation, and broaden women’s access to resources and opportunities.

We have created a series to help give you some ideas on how to contribute to gender equality, from childhood through adolescence and, also, into adulthood. In this first article, learn how to begin this process with children. 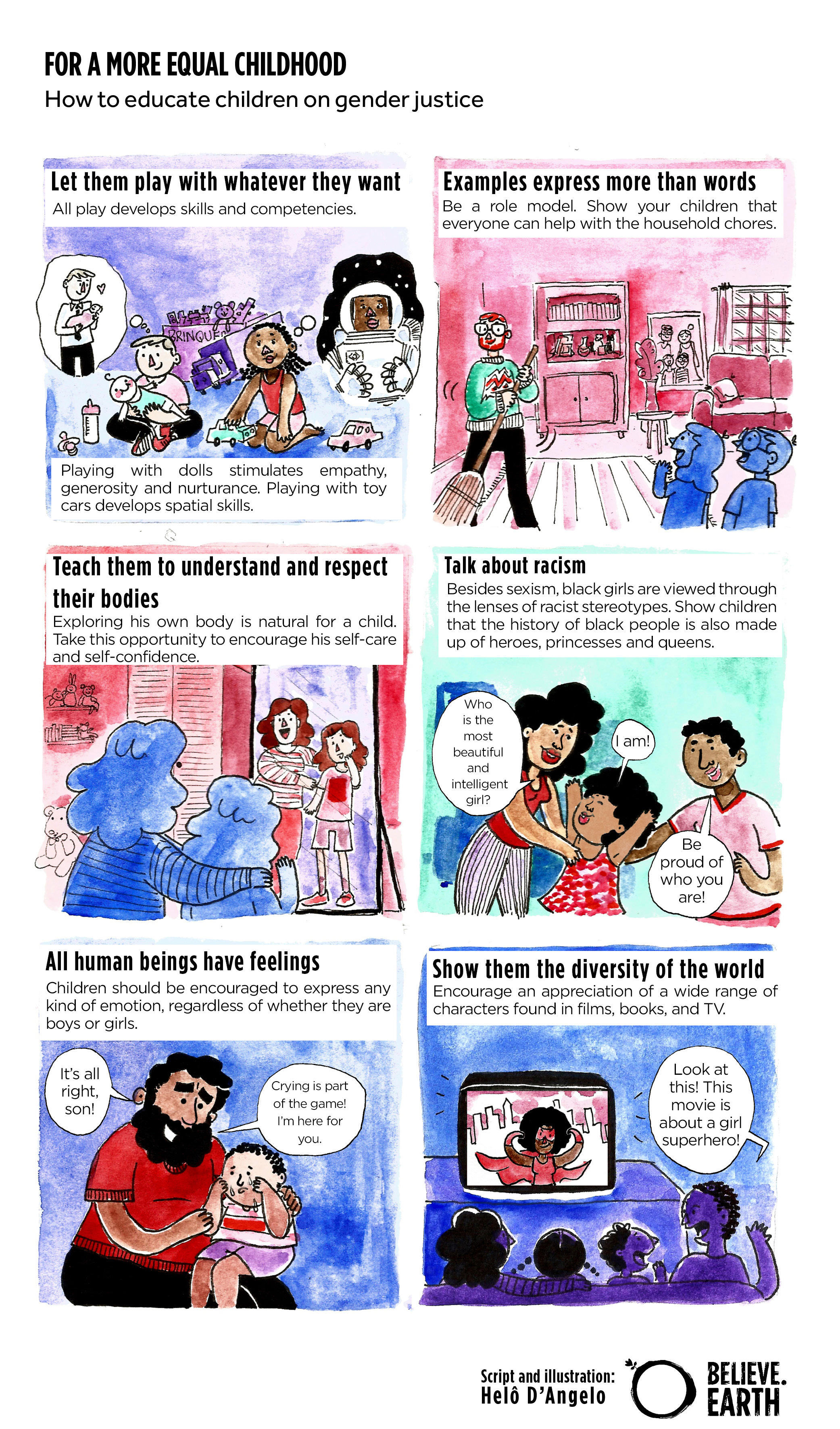 DO NOT LIMIT YOUR CHILDREN’S ACTIVITIES
All children, regardless of biological sex, have the right to reach their full potential by learning any subject, practicing any type of sport and playing with any toy.

Experts say that curtailing activities according to biological sex may stunt a child’s development, as toys traditionally targeting boys tend to develop more spatial skills, while toys marked as “feminine” stimulate more sociability and caring. When limited to the type of play expected for their gender, children fail to develop certain skills.

“We should encourage boys to do ‘girl’ things, as well as encouraging physical and analytical (‘boy’)” strengths in all children”, says Lise Eliot, a neuroscience professor at Chicago Medical School, which is part of the Rosalind Franklin University of Medicine and Science in Chicago, Illinois (in the United States).

ACTIONS SAY MORE THAN WORDS
Children quickly absorb and reproduce behaviors they see and experience in their daily lives. A study published in 2001 showed that the way young adults approach the division of domestic work between men and women is directly associated with how this work was divided in their families of origin.

“We have to change the adults’ attitudes,” says diversity education specialist Lisiane Niedsberg Corrêa. Parents and guardians, Corrêa emphasizes, need to know what to say before starting a dialogue with a child. “A lot has changed, and we need to have respect for one another and understand diversity, so there are words and phrases that have been said freely and can no longer be said,” she explains.

OPEN CONVERSATION
Even if they are being raised in an environment free of gender stereotypes at home, children still receive such messages in media, at school and with their extended families and peers. “The biggest challenges are that children are often the ones driving the stereotypes”, explains Christia Brown, a professor of developmental and social psychology at the University of Kentucky.

“They pick up what they see in culture and stick to it. Setting a good example (for example, having a dad who does the cooking) is not enough. Parents really need to point out and talk about gender stereotypes explicitly with their children,” Brown says.

ALL FEELINGS ARE HUMAN
Children need to know that they can express all their feelings, that there are no “girl” or “boy” emotions.

Boys, for instance, should be encouraged to develop their sensitivity and affectivity. “Most kids are inclined to be kind and to be empathetic and to be compassionate,” explains Judy Y. Chu, who teaches a course on boys’ psychosocial development at Stanford University. “It is not about changing them, really, it is more about letting them keep those things, their abilities and their sensitivities. All those things will serve them well.”

READ, LISTEN TO AND LIVE IN A DIVERSE WORLD
Living among people of different social classes, races, nationalities and cultures and seeing representations of these groups in media helps children, regardless of their own race or gender, understand that diversity is part of human nature and not something “different” from their world. Although media content reflecting diversity is increasing, many children’s programs lag behind, restricted, for instance, to stories with white and male protagonists.

A US survey showed that 4-year-old children exposed to TV three to four hours a day without supervision were twice as likely to claim that boys were better than girls. Parents and guardians should watch the programs with them and talk about stereotypes. “It is good for them to have kind of an ability to reflect critically, to question it,” explains Stanford’s Judy Y. Chu.

MAKE CALCULATIONS AND USE NUMBERS WITH GIRLS
Studies show that parents of boys use more numbers and numerical concepts than parents of girls do. In her book, Parenting Beyond Pink and Blue: How to Raise Your Kids Free of Gender Stereotypes (Penguin Random House, 2014), Christia Brown, the University of Kentucky psychology professor, recommends that girls interact with numbers on a daily basis, whether counting flights of stairs or spoonfuls of food. Always try to stimulate all the capacities a child can have, regardless of sex.

TEACH RESPECT FOR DIFFERENCES
The idea that there are “standard” bodies (and consequently others that are left out, such as obese or disabled bodies) encourages discriminatory attitudes and is often rooted in childhood. It is important that the children like their own bodies, respect their friends’ bodies and understand that there is no “right” or “perfect” body.

It’s crucial, according to the professor, not to criticize. “We have to say that [touching] is not bad,” she says, but that other people cannot touch the children’s genitals. Rossi emphasizes that children need to know that “they are the only ones allowed to touch [those parts].” Along the same lines, children also need to be told that touching themselves is a private activity, Rossi stresses, to take place in “their own room, if the child has a room, or in the bathroom. Never let that happen in an open environment.”

Another expert’s recommendation is that parents and guardians teach children the scientific names of their genitals. This will avoid shame about the body and will make the child feel more comfortable with the subject. “It is important that families and teachers teach the right words,” explains Rossi. “Just as we do while explaining to the child that the mouth is the mouth and the nose is the nose.”

According to the professor, only using nicknames instills in children a sense of unease about the subject. “It implies that these areas should not be mentioned, that they are forbidden,” she says. The names of the genitals “are words that should be part of the speech, of the vocabulary of the child. Of course, you can use a nickname, but it’s important to say it’s just a nickname, and also teach the correct name.”

Using the correct names can also help your child name inappropriate actions. According to Rossi, if an adult exposes himself or touches the child’s genitals, having the right language will help her explain the improper or abusive behavior to another adult. “In a broader way, you even protect the child,” explains Rossi.

BE AWARE OF RACISM
Gender can also be intertwined with race. When raising a girl who is also a black child, keep in mind there are two barriers she will face from an early age: Sexism and racism. In many countries, racism affects how black girls are treated at home, at school and on the streets, and interferes with the formation of their self-esteem and identity. According to educator Gina Ponte, “being born a black child and being racialized from the moment you are born means being in a place where you are denied the right to think positively,” since speech related to black people is mostly derogatory.

“You need to understand that this identity as a black person must be built in a positive way,” says Ponte. Adults need to offer a world in which black children recognize and value themselves.

According to Ponte, it’s important “to give these children the opportunity to know their ancestral past beyond the history of slavery,” granting them the possibility of building “a positive black identity of strength and courage. And how to do it? Read African tales and stories which introduce the child to heroes, princes, queens.” These black characters, according to Ponte, “can be a source of inspiration for black children.”

It’s also important to expose white children to such stories, Ponte says, helping them “deconstruct this idea that being black means being associated with everything that is bad or all that is inferior.”

As well, be aware of racism at school. According to Ponte, black children do not always understand what is happening and can end up keeping silent about the problem. That’s why is so important “to listen to this child and the way he behaves,” as well as paying attention to what’s happening in school and talking with the teachers and administrators.

To produce this report, we consulted: Judy Y. Chu, who teaches human biology at Stanford University and is the author of When Boys Become Boys: Development, Relationships, and Masculinity; Lisiane Niedsberg Corrêa, a specialist in education for diversity and creator of the Desvendando Problemas Sociais (Unveiling Social Problems) project; Christia Brown, a psychology professor at the University of Kentucky and author of Parenting Beyond Pink and Blue: How to Raise Your Kids Free of Gender Stereotypes; Lise Eliot, a neuroscience professor at Chicago Medical School and author of Pink Brain, Blue Brain: How Small Differences Grow into Troublesome Gaps and What We Can Do About It; Gina Ponte, an educator and creator of the Mulheres Inspiradoras (Inspiring Women) project; and the professor Célia Regina Rossi, from Paulista State University, specialist in education and sexuality, coauthor of Sexuality and Sexual Education: educational policies, research and practices.

To review this article and comics, we consulted: the lawyers from Alana Institute, Mayara Silva de Souza and Juliana Pereira, both activists for racial equity; the  journalist Juliana Gonçalves, coordinator of Black Women Parade in São Paulo; and the professor Célia Regina Rossi.