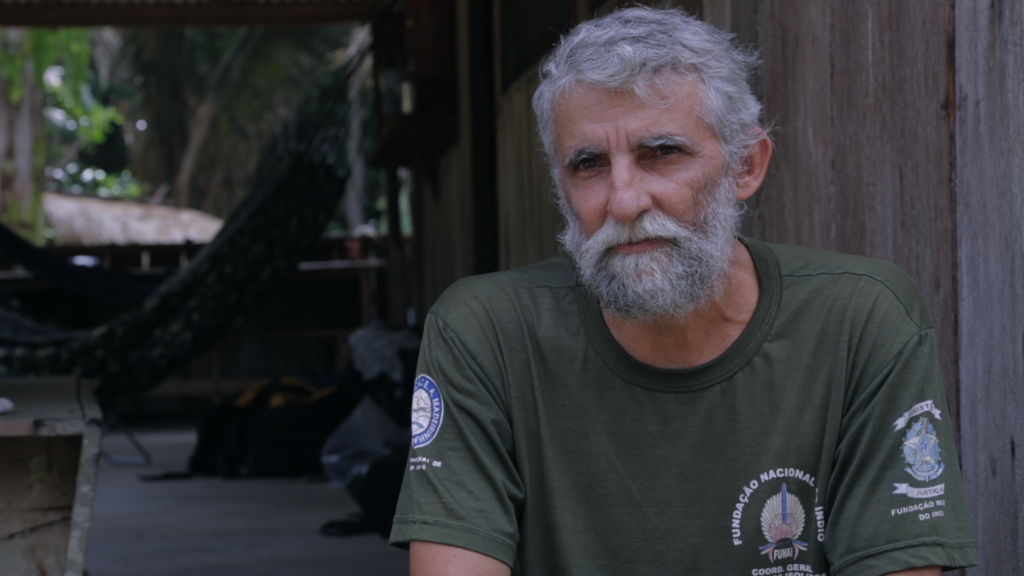 Jair Candor’s life story is one of transformation: Raised to believe that Indians were obstacles to progress, he came to admire their way of life, and has dedicated his life to defending them (Photo: Zeza Films)

Jair Candor, 57, was raised with the idea that Indians were animals and had to be killed so they would not disturb the development of the country. Today, this employee of Funai (Brazil’s National Indian Foundation) is a relentless protector of indigenous rights.

Nominated for the Golden Butterfly human rights activism award by Amnesty International, Candor attended the Movies that Matter festival in The Hague, in the Netherlands, after having said that he would only go if he was placed in a cage because he was “too wild to take a plane”.

Candor’s fight for the Indians was portrayed in the documentary Piripkura (Zeza Films), directed by Mariana Oliva, Renata Terra and Bruno Jorge. The film tells the story of Pakyî and Tamandua, two of only three surviving members of the Piripkura tribe. By choice, both live isolated in the northwest area of Mato Grosso, between Rondolândia and Colniza, under constant threat from farmers and others interested in their lands.

As a coordinator of the Frente de Proteção Etnoambiental Madeirinha-Juruena (Madeirinha-Juruena Ethno-Environmental Protection Front), Candor is responsible for registering whether the two Indians are still alive and living in the region every year. It is the only way to ensure that the area remains protected so that the two men can continue living there.

Due to the impact of the film and despite his desire to return to the jungle soon, Candor talked to Believe.Earth about how much the Indians can teach us and the positive impact that the documentary could have.

Believe.Earth (BE) – The documentary was only just released, but has already won several awards. What has been the effect of this?

Jair Candor (JC) – When I went to the festival in Rio, I was not even expecting to win anything. But, when they announced the prize, it was amazing. It’s a great film. So, I hope it will change some people’s opinions, because you must understand that Indians deserve respect. Their stories must be told. Few people are interested in the problem of our region: Forests. And, our forests are under attack from all sides, from the loggers, landowners, and agribusiness. But, I think that outside Brazil the movie will be more successful than it will be here.

BE – Do you think the film can help in the Piripkura’s border demarcation, which until today is only interdicted?
JC – I pray for it every day of my life. For one thing, the indigenous designation of the land has preserved what loggers and others would have already deforested. I think that many people would change their minds if they knew the story of these two guys. They would pay more attention to the forests and put pressure on the government. We really need that because these Indians live at constant risk of being killed.

BE – Do you fear for their lives?
JC – A lot! I’ve heard that one farmer says that he’s going to kill them if they pass by him. I always try to tell them to take different routes, for that reason, but the threat is constant. Loggers, diggers, everybody is interested in the indigenous lands. Sometimes, I get really angry about it, but we must keep fighting. It’s a relief for me every time I see them alive. I’m very touched, it is even hard to explain how I feel. When I see that they are well, they are calm, I’m also ok.

BE – Why such admiration?
JC – Because they are people who are struggling to live without hurting anyone, owing nothing to anyone and not depending on anyone else for survival. It’s a great lesson of life. I admire their independence. Those guys have only a big knife, an ax and a torch. They do not need anything else, not oxen full of grass, or a field full of soy, nothing. They just need the forest. With their wisdom and the forest, they live well and are happy. I wanted to have such intelligence. Pakyî and Tamandua, two of the three remaining survivors of their tribe, in the documentary Piripkura, which depicts their lives (Photo: Zeza Films/Maria Farinha Films)

BE – Did it take you long to come around to defending the Indians, given that you were raised with very different commitments?
JC – Yes, it took some time. Because I grew up with everyone telling me that Indians were like animals and we could kill them. The more they were eliminated, the better it would be, because they were disrupting the development of the country. I saw rubber tappers organizing an expedition to kill Indians. It was tough.

But my perceptions of the indigenous began to change when I was working on a farm in Ji-Paraná (state of Rondônia, in the north of Brazil) and would come in contact with Indians from the Gaviões tribe. I was on one side of the river, while they were on the other. One day, they went to the house where I was staying. I used to give them things like coffee and sugar. Or, I would help them with the engine they used to get the rubber. Soon, we became friends. After a while, they pointed me out to Funai. By that time, I had realized that my childhood learning was wrong, and I changed my ideas about them. Thank God.

BE – How did you first find the Piripkura?
JC – They were first contacted [by people outside their tribe] in the 1980s. In 1989, another tribe charged Funai not to abandon them. I got a call asking if I could try to find them and I did. We started the expeditions in May and weren’t able to find them until August. I thought they were no longer there, because the whole area had been taken over by tractors and chainsaws. But they were. I could not believe it. They are like ninjas! Scene from the Piripkura documentary: An encounter between Candor and the two natives (Photo: Zeza Films/Maria Farinha Films)

BE – They admire you, too, don’t they?
JC – [Shy laugh] I think they like to see me and they also respect me. I don’t know if it’s fate, but I’m always there to help when they need something. We developed this friendship because of that.

BE – What did they need?
JC – Once, the elder one [Pakyî] was sick and I asked him to come to the hospital with me. It was hard to convince him. Luckily, Rita [the third living Piripkura, although she is no longer living with Pakyî and Tamandua] was there and helped me. We took him to the hospital where he remained hospitalized for about 4 months, because after he underwent surgery on the gallbladder [the initial problem], he got malaria and chicken pox. When I visited him, he looked at me as if I were the savior of the nation. He clung to me, pointing to the forest and asking me to take him back to the jungle. He was desperate. But I had to explain him that he needed to stay longer to get better. Then, I took him to the place I was staying and took care of him for several weeks. I even woke up at dawn to give him medicine. As he got better, we started hunting and fishing. When he recovered, he did not want to stay. He wanted to go back to the forest. That’s their life. We cannot say if it’s right or wrong. It is their right and that’s all. I like to see them enjoying their life, they are healthy and lively. Both are very fun people. They are always very cheerful, even dancing. It’s a life lesson. Jair with Pakyî (left) and Tamandua in a scene from the documentary: Mutual admiration and respect (Photo: Zeza Films/Maria Farinha Films)

BE – Do you spend long periods in the jungle away from your family?
JC – Yes, I’m used to it. I’ve been doing it for a long time. Since the beginning, it was not me, but my wife who held down the fort and stayed in the city looking after our kids. But they grew up [one is now 21, the other 13]. Now, it’s much better for her.

BE – Pakyî and Tamandua always carry a lighted torch. How do they keep the flame?
JC – [Laughs] I’ve been working with them for 29 years, since Tamandua was a little boy. I have seen that torch extinguished only a few times. Fire is very important for them, so much so that on the few occasions they came to us, it was because they wanted fire. They carry that torch, always lit, everywhere. I always joke comparing their torch with the one from the Olympic games.