Life reborn in the mud

On Ilha de Deus (God's Island), a community is burying the past, reviving the mangrove and taking the future into its own hands 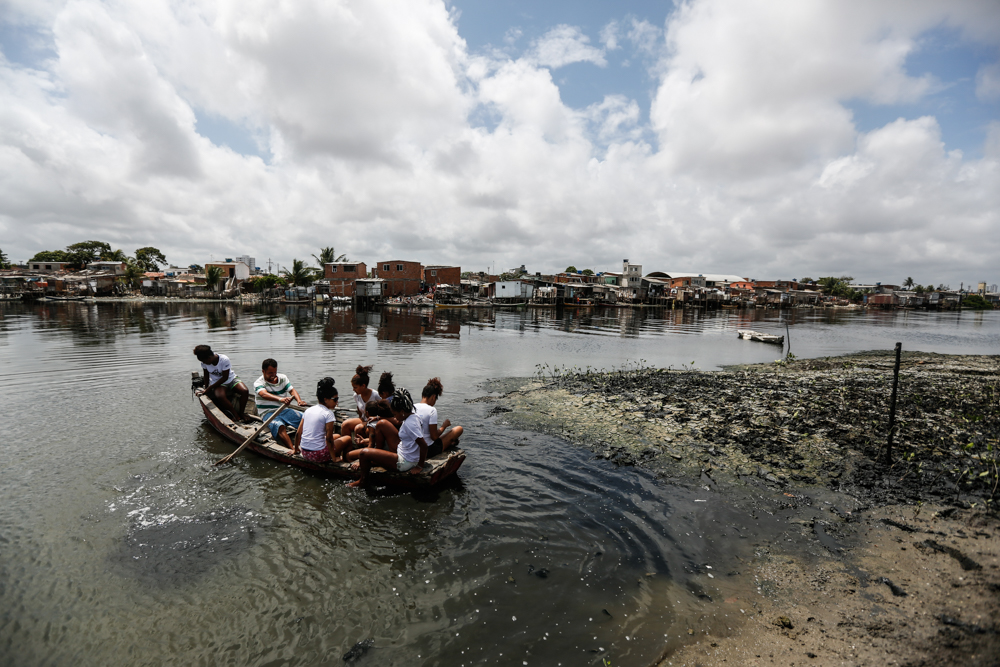 From rivers and mangrove comes the livelihood of 90 percent of the inhabitants of Ilha de Deus (God's Island) (Rafael Martins/Believe.Earth)

Until the middle of the 1980s, Josenilda Pedro da Silva, best known as Nalvinha da Ilha (Nalvinha from the Island), and her neighbors lived in abandoned territory. Residents of Ilha de Deus (God’s Island) in Recife (the capital of the state of Pernambuco, located in the northeast area of Brazil) had no water, no energy, no attention from the government. During this period, the island was referred to as Ilha sem Deus (Island with no God). Its residents suffered from a dearth of everything, including self-esteem.

Surrounded by three rivers and next to Parque dos Manguezais, the largest urban mangrove in Brazil, the island’s residents (1,500 people at that time) depended on nature to survive. Most of the people on  Ilha de Deus made their living by picking shellfish, until 1983, when two nearby factories caused an environmental disaster by dumping waste from soap production into the water. The island’s surrounding waters turned into foam. Families began to starve and had to leave Ilha de Deus for the first time in search of some means of survival. “The violence came, and we lost many young people. The island was an easy hiding place for gangsters,” says Nalvinha da Ilha, who was small when all this happened and tells the story through the memories of her mother, Berenice da Silva, known on the island as Mrs. Beró.

The place made newspaper headlines due to the crime and devastation, attracting the attention of a priest and a nun, who moved there and founded the NGO Saber Viver in 1983. The missionaries’ plan was to professionalize residents. “They said they would not give us the fish, but teach us how to fish,” says Nalvinha da Ilha. “They wanted to open our minds so that we would learn to fight.” The initiatives were focused on women, and included sewing, school reinforcement, and craft classes. Women were the ones who took to the streets and went to the government’s headquarters in the center of the city to protest and demand improvements. “They had to make history and make the island known to people before change could come,” said Nalvinha da Ilha, who is now the NGO’s volunteer president. “Our first achievement was clean drinking water.”

In the 1980s, Ilha de Deus’s first 60 masonry houses were built with the help of German organizations that to this day support the island’s projects. Entrepreneurship has become a hallmark of this community. Many people have become bakers, sales representatives or handicraft producers from the courses offered by NGOs like Saber Viver. But the island did not forget its origins: It remains the symbol of the defense of the mangrove of Recife, through work coordinated by Nalvinha da Ilha.

Recife is the mangrove’s daughter. The city was built above a coastal plain in which the main soil was the mangrove. Today, mangrove accounts for only 2.4 percent of the city’s surface. The capital of Pernambuco has a population of 1.5 million people, but it is the 2,000 inhabitants of Ilha de Deus who have established the most intimate relationship with this ecosystem. “My parents and grandparents are fishermen,” says Maria Eduarda Santos, 18, a volunteer at Saber Viver. “We learn how to recover the mangrove as it is our way of life.”

Two years ago, the NGO started the Semear and Colher (Plant and Harvest) project with an initial grant from the German foundation Aktionskreis. Saber Viver created environmental education classes for children and young people and also started a project to replant mangrove seedlings around the island. Residents get into the work, putting their feet into the mud and hunting down plastic bottles thrown there. They clean the plastic bottles, plant seedlings in them and search for more degraded areas for replanting. The initiative has already returned 24,000 seedlings to the environment. Fábio Lima, 32, is the technician responsible for this project. He is a fisherman and his knowledge of the area’s environmental problems comes out of his work.

“One day I saw Mrs. Nalvinha crying because the seedlings were dying,” says Lima. “More than 40 percent of them did not survive. We investigated the causes and reduced their mortality.” “The seed needs to be in the mud,” explains Nalvinha da Ilha. “Since there’s a lot of waste underneath, the seed finds bags and bottles as barriers and does not stay in the soil. Our job is to replant each one of them with our own hands.”

There are three rivers surrounding the community, but two are practically dead. With the replanting, they intend to save at least one of the waterways and guarantee their own survival. They are hoping to restore the fish and mollusk population (90 percent of Ilha de Deus locals once made their living from fishing or related activities). One of Nalvinha da Ilha’s greatest joys is finding species that had disappeared from the region, such as the Uca crab, also known as “scissors.” These are signs that nature is responding to the residents’ efforts.

To ensure the food security of the residents, Saber Viver runs a vegetable garden, using PET bottles removed from the mangrove that residents turn into small pots for planting. Twenty homes have already participated. One  is that of Maria José da Silva, 65, a maid by profession, who now has a green wall of lettuce, coriander and spring onions in her narrow corridor of a  backyard. “You have the feeling of taking care, and are anxious to see everything growing,” she says. The NGO initiative includes workshops for residents on how to maintain crops. 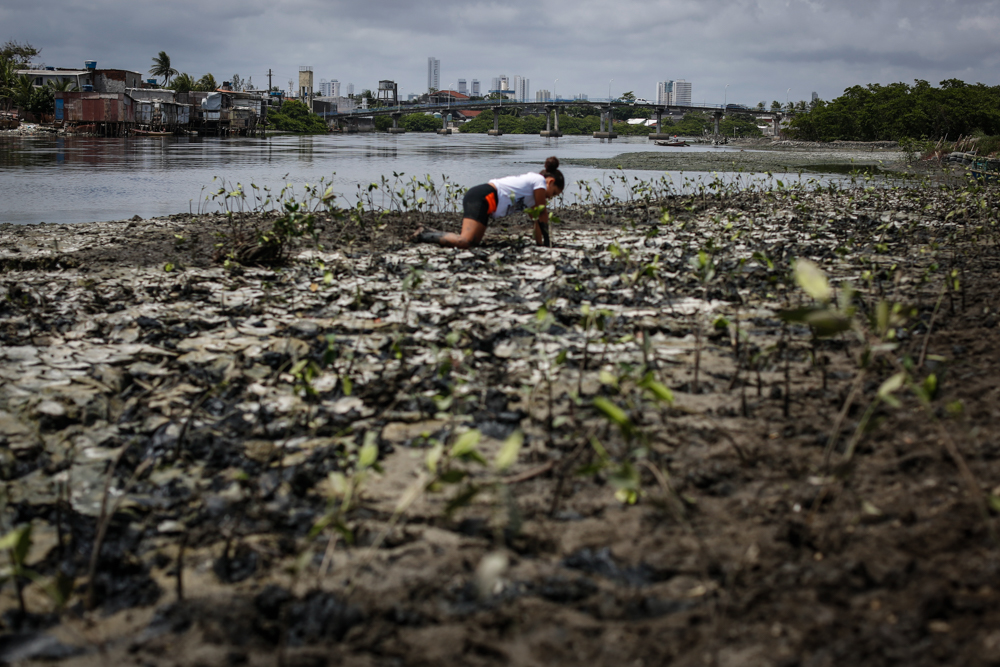 The Semear e Colher (Plant and Harvest) project selects areas where the mangrove is degraded and replants them. (Rafael Martins/Believe.Earth) 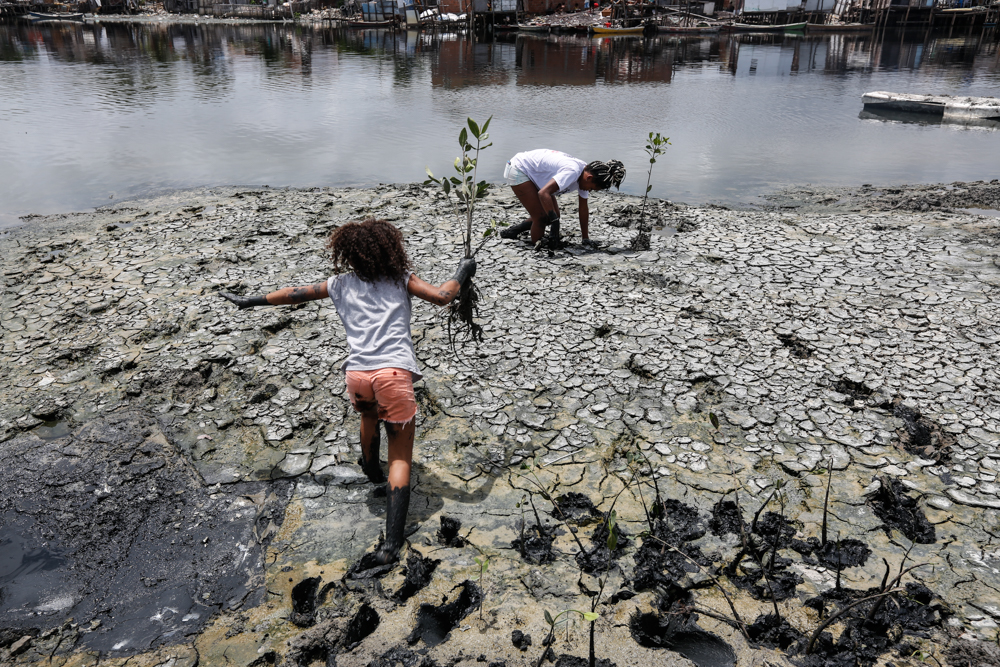 Teenagers and children participate in the replanting of mangrove seedlings (Rafael Martins/Believe.Earth) 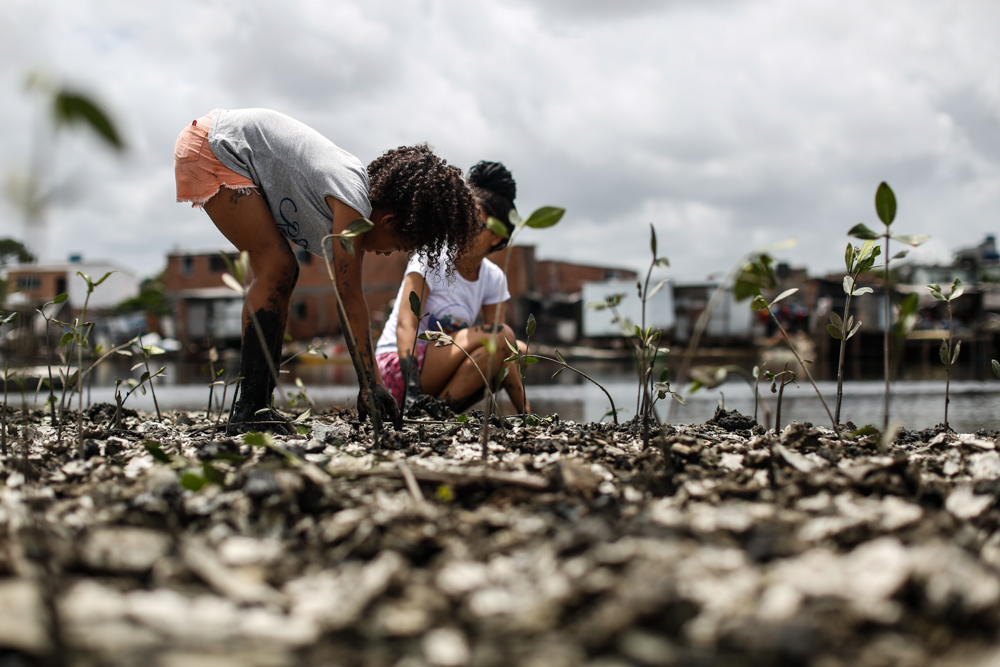 Volunteers have already replanted more than 20,000 seedlings. They get into their work, putting their hands in the mud (Rafael Martins/Believe.Earth) 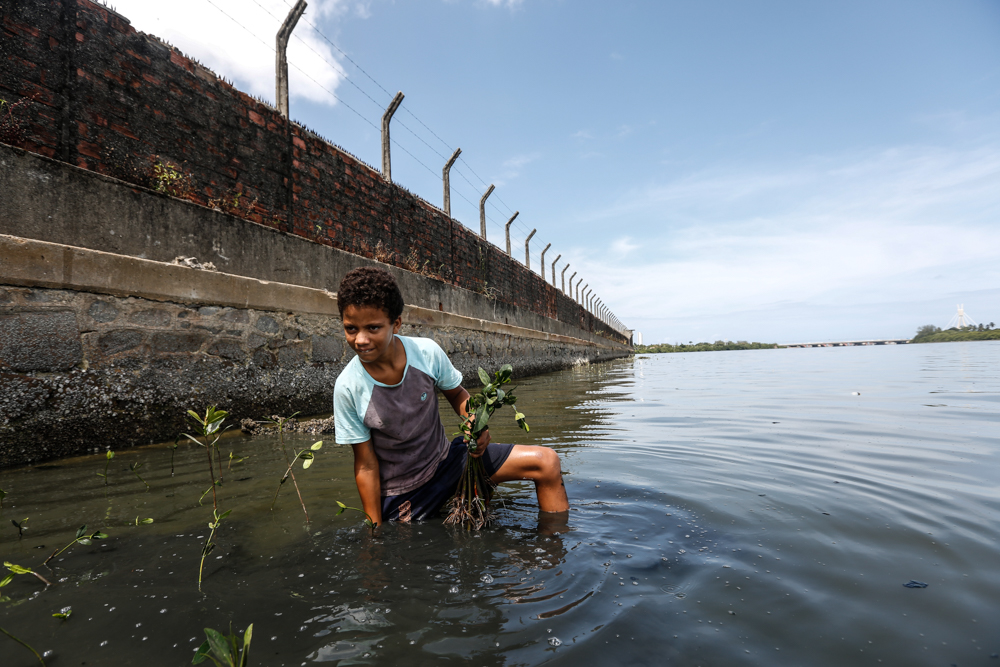 From these activities, children, from an early age, learn the importance of preserving nature (Rafael Martins/Believe.Earth) 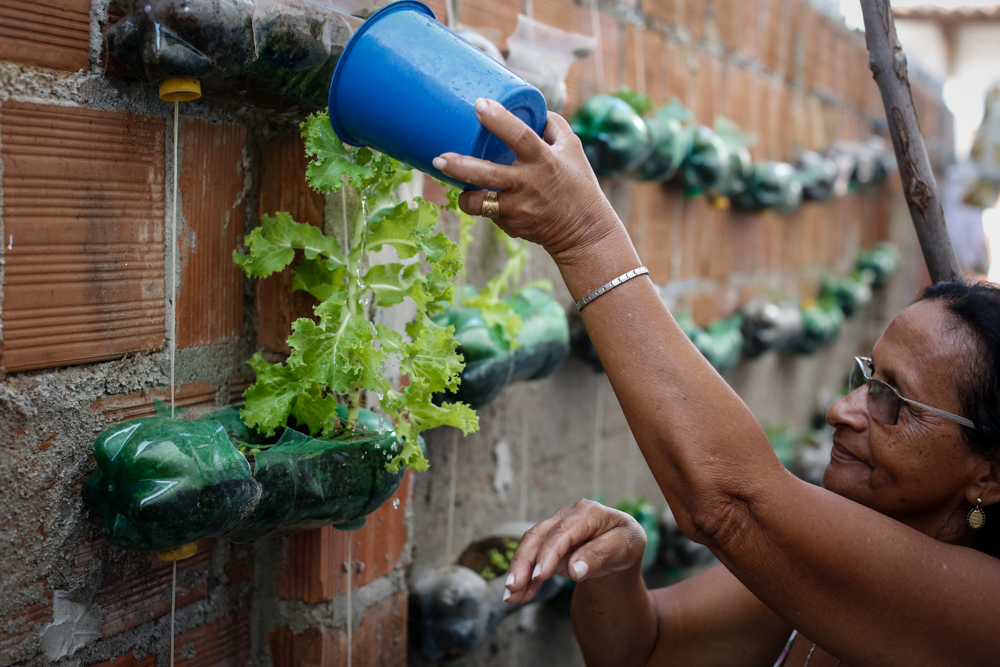 Vegetable gardens made with bottles removed from the mangrove provide food for the families of the island (Rafael Martins/Believe.Earth)

A SIGHT TO SEE
In 2012, Ilha de Deus entered the tourist circuit of Recife. The community worked with a university professor to make an attraction of taking visitors to watch the harvest of shellfish and even putting their hands into the mud to remove the crustaceans. The catamaran tours allow you to visit the Capibaribe river and the islands in the center, with a route bordering the Pina basin and ending with the famous seafood served by Saber Viver.

“The most important thing is not even the money that comes into the community,” says Fábio Brito, one of the local guides and a resident. “Since we are hospitable people, a lot of tourists come back not only to visit but also to help us.” By 2020, these efforts are expected to culminate in a museum that will show the community’s history of overcoming. A history of struggles and achievements that deserve to be remembered. The Uca crab is one of the species that had disappeared, but have recently been seen again in the mangrove near the island (Rafael Martins/Believe.Earth)