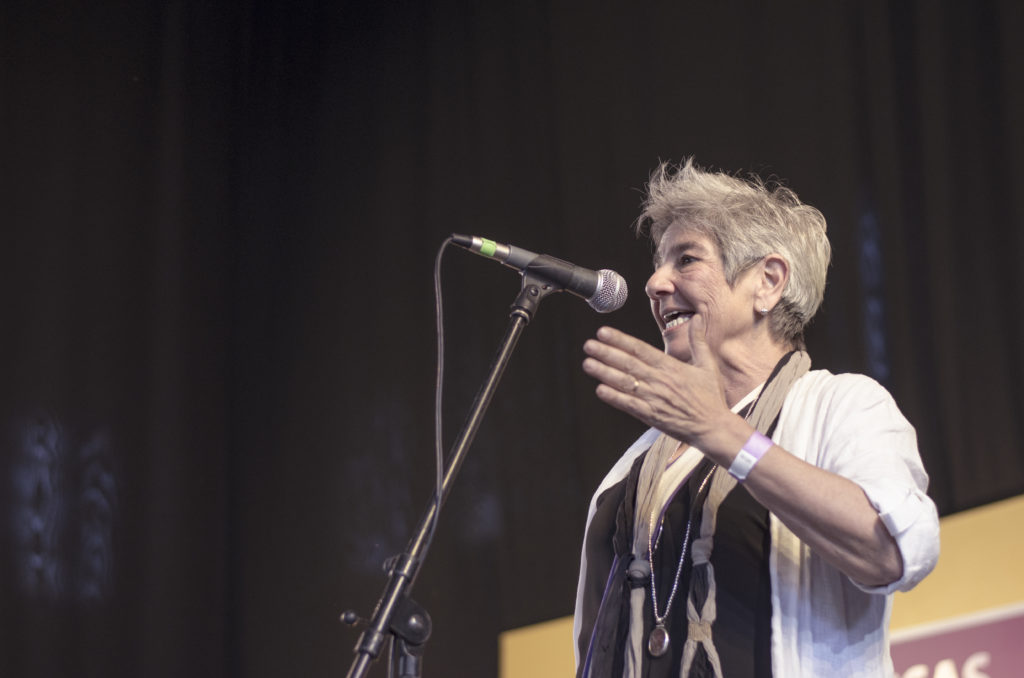 It is a sunny November Saturday in Montevideo. More than 2,000 people walk along Avenida 18 de Julio, one of the main streets in Uruguay’s capital, demanding an end to violence against women. It is the last day of the 14th Latin American and Caribbean Feminist Meeting (EFLAC), which draws activists from across the continent to discuss gender relations and how to organize for change. Among the throng of women is Lilián Celiberti, 68, one of the organizers of the march.

Celiberti was a student activist in the 70s, confronting military dictatorship in her country and in Brazil. She was 22 when, in 1978, she was arrested with her partner and her two children in Porto Alegre, by the Uruguayan military in cooperation with the Brazilian military. This episode is widely known as “the kidnapping of the Uruguayans”. At the time, the family’s kidnapping was reported by the press, which revealed the crime to be part of Operation Condor, a joint effort by Latin American dictatorial regimes to repress opponents.

Celiberti was imprisoned and tortured, and some of her friends were killed by the dictatorship, but she continued to believe in the possibility of change. “I don’t believe in heroism,” she says, when asked what the trajectory of women who have faced the so-called ‘years of lead’ may represent. “I believe in collective action.”  Each generation, she observes, finds new ways of resistance suited to its own historical moment. “There is something in human beings and in human aspirations for freedom that is stronger than authoritarianism,” she states. “At some point, all roads appear to lead to resistance.”

More than three decades have passed since the kidnapping, and Celiberti continues searching for routes to a fairer world. She is involved with Cotidiano Mujer (Everyday Woman), Uruguay’s first and only feminist magazine, a project of Centro de Comunicación Virginia Woolf  (Virginia Woolf Communication Center) created in 1985. The Centro and the magazine aim to preserve the history of the Uruguayan women’s movement and develop new approaches to fighting gender inequality in Latin America, such as advocacy for domestic workers and providing education to women in prison. Uruguay recently took a step forward on an issue that is critical for the global feminist movement: In 2012, the country allowed abortion up to the 12th week of pregnancy. Celiberti and Cotidiano Mujer had been campaigning for the approval of the law since 1989. “It was  taboo and people really doubted us,” she says. “But, once an issue becomes public, it generates debate, argument and conviction. Then the discussion just kept going.” For her, there are significant provisions in the Uruguayan constitution that have contributed to this change, such as the concept of a secular state, and support for individual freedoms. “The interruption of a pregnancy is women’s right and they’re free to decide about their own bodies. It establishes the degree of an individual’s autonomy within society,” she says. “If I cannot make decisions about my body, what can I decide?”

THE PATH OF DIVERSITY
There is no one way to feminism, Celiberti believes. The movement for women’s rights is increasingly complex and has embraced other causes, such as the battle against racism, heterosexism and cultural imperialism. “Nowadays, young women come to feminism with all kinds of arguments we didn’t have,” she says. Celiberti at the opening of the 14th EFLAC meeting: There is no society without women’s work (Julia Kubrusly/EFLAC)

For more than a year, Celiberti has organized a small group that develops ecofeminist thinking, a school of feminism asserting, among other things, the human right to water. “We link ecology and feminism by asking, who sustains life?” she says. “Feminist perspective tends to show that the world outside the home exists because it is supported the private world, by women’s work, because there is no society without daily caregiving.”

According to Celiberti, the only possible way to a more egalitarian world is to strengthen community ties and solidarity. One must break down barriers and question authority.