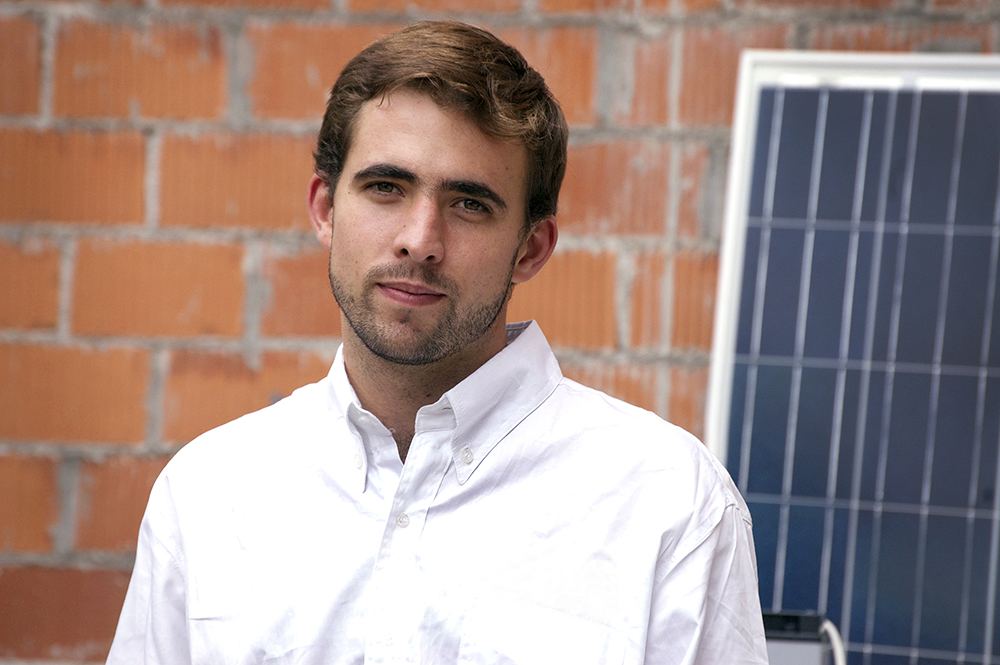 “We reach places no one else reaches, create workflows with the local community, and have experience in providing services and financing to the most isolated areas.” To Manuel Wiechers Banuet, this is Iluméxico‘s greatest advantage. The company,  founded by Banuet in 2010, has since installed 10,500 panels that bring solar energy to approximately 50,000 people. “We will install about 6,000 panels in 2018 and want to reach 1 million people by 2023,” says the industrial engineer, who graduated from the Universidad Nacional Autonoma de Mexico (UNAM).

His entrepreneurial spirit has always been present; even as a child, Banuet wanted to follow in his father’s footsteps and have his own business. While in college, he took part in the Goldman Sachs Global Leaders program and attended the 2007 Global Leadership Summit in New York City. There, Banuet met an inspiring group of people involved with issues related to climate change and the environment, and immediately became obsessed with these problems. Upon returning to Mexico, he founded the Environment and Energy Society (Sociedad de Energía y Medio Ambiente – SOEMA) with the help of his new colleagues and other people from his university. Today SOEMA has over 400 members and organizes events, conferences and other projects supporting reforestation, recycling and wind energy. It has received the support of Nobel Laureates and representatives of the Mexican government.

Banuet was awarded a grant to attend the Calgary International Student Energy Summit in 2009, where he finalized his proposal for a company devoted to energy and social development. Back in Mexico, he gathered a strong team to further develop his idea and submitted his proposal to the Santander Bank’s entrepreneurial innovation contest. Iluméxico’s proposal won the competition and the prize money allowed Banuet to quit his day job and work full time towards his dream. “If you are working with communities that are so distant and so complex, it’s hard to develop a business model that is lucrative and that investors can trust. I think we have achieved a lot in this regard, we have attracted investors and are very close to being solvent,” he states. A lot of this success is due to Iluméxico’s innovative rural electrification model, from its implementation strategy to its technology. The solar panels were developed specifically for rural use, with a focus on durability, ease of use and adaptability to each home’s needs. The technology includes intelligent algorithms that save energy and also allows the user to adapt the settings according to how much electricity they use. The systems can support any energy need, from houses with only two light sockets to equipment for schools, computer centers, street lighting, or air conditioning for medical clinics.

Installation is done by the users themselves, with supervision and support from Iluméxico’s staff. “This is so they take control of the technology, learn how to make repairs, if necessary, and lose their fear of solar energy,” Banuet explains. Along with such technical support, Iluméxico offers community development workshops to address local issues. The workshops cover themes such as job skills development, sustainability, community training, gender equality, and the use and social control of energy (that is, how to ensure that the energy the community is generating serves its own needs). These workshops are held in partnership with organizations specializing in these fields.

“Previous initiatives have failed due to a lack of follow-up and of adequate mechanisms for support, maintenance and sustainability of the equipment. At Iluméxico, we focus on creating platforms and mechanisms so that families receiving power may use it permanently, offering a win-win business model, where our operations can be sustained while families receive service,” says Banuet.

Iluméxico would not have achieved such success without the support of its partners. Government entities, such as Mexico’s Ministry of Energy, Federal Electricity Commission, Ministry of Social Development and the National Housing Commission, help the company by providing information on the communities and on Mexico’s energy infrastructure policy, as well as strategies for implementation. Lately, Banuet has also been working with government officials to establish technical guidelines for such projects and collaborating with national and state-level agencies to publicize his model throughout Mexico and eradicate energy poverty.

Manuel Wiechers Banuet is an Ashoka fellow. Ashoka is a worldwide organization present in 84 countries and leads a movement in which any individual can be responsible for positive social transformation.