Through sustainable practices, with the help of his family, the retiree transformed arid soil into productive land 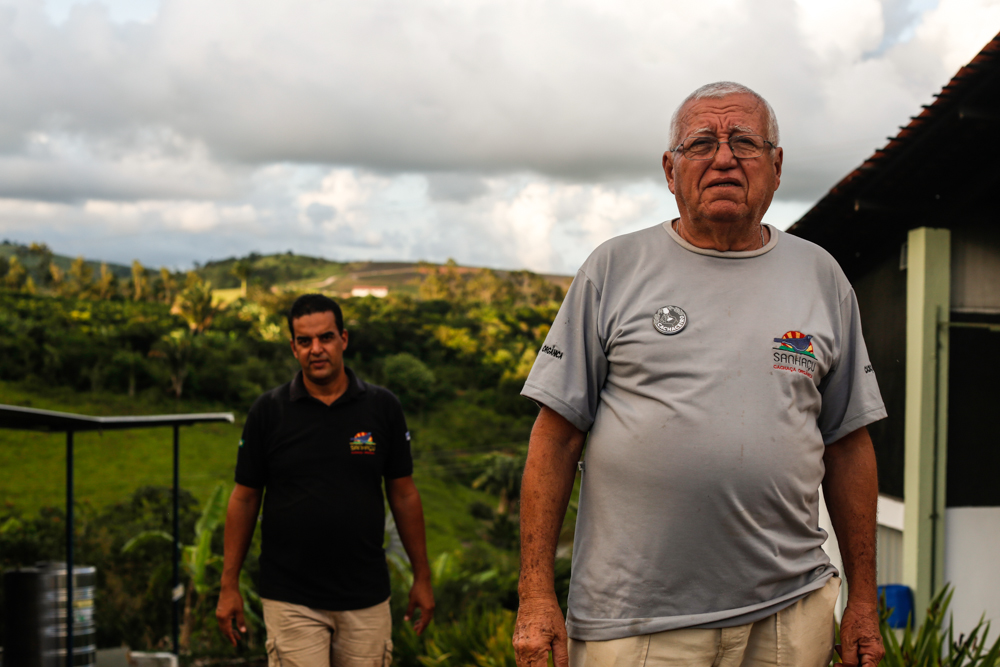 Moacir Eustáquio da Silva, 72, chose to buy the worst piece of land, when, in 1993, he decided to leave Recife after 14 years. The property he wanted, in Chã Grande, 82 kilometers (51 miles) from Pernambuco’s capital, boasted two and a half hectares of barren, stony soil, plus a desert landscape with six dead trees (including jackfruit and olive trees). His friends and his children said he was insane. But, newly retired from the Navy, he did not care what anyone else thought. da Silva offered five telephone lines, which were worth a lot at that time, as payment for the land. (While telephone lines in Brazil are now owned by the government, in those days they were acquired as assets by individuals, who could then profit by selling them.) He was looking for a place where he could start a small, sustainable business.

Born and raised in Barreiros, a seaside municipality (more than 100 km from Recife), da Silva never enjoyed life in the big city. When he retired, he saw an opportunity to get in touch with his rural roots. Having studied physics in college, he decided to use the land he bought as a laboratory for practices that would be harmonious with nature. “I decided not to live only for my own comfort,” he says. “I wanted a life here that was productive and useful, as well as enjoyable. I realized that I could not save the planet, but I could save two and a half hectares of land.”

There was neither water nor electricity in Chã Grande. Even so, da Silva slowly moved onto his new property. At first he just went on Fridays, returning to the capital the next day. After a while, he began staying the whole week. Crazy about seeing things sprout from the ground, he planted all kinds of seeds. He made many mistakes until he succeeded. “From the beginning, I said we would not poison the land,” he says, referring to the use of agrochemicals and other unsustainable farming practices.

GREENING THE LAND
Part of the property, once entirely empty, is now a small preservation area with 46 significant tree species, according to an academic study performed on da Silva’s land. The change occurred through agroforestry. When da Silva bought his property, he sought help from local farmers and agronomists to find out how to plant in its difficult soil. “We were planting without regard for the species,” he says. “But we lost a lot. For example, if we had 20 stalks, one would survive for a short time, only to later die. When things apparently started working well, four years after we started, a neighbor burned his pasture and the fire destroyed 70 percent of everything we had.”

At that time, his family used to plant vegetables for their own subsistence. Along with other farmers of the region, they founded one of the first organic product fairs at Associação Amigos do Meio Ambiente (Friends of the Environment Association) in Gravatá, Pernambuco. “My father was living on his pension, so he didn’t need it, financially speaking,” says Moacir da Silva’s eldest son, Oto Barreto da Silva, now 48 and the company administrator. “But there was always production left over. And, he wanted to get in contact with people who thought the same way.”

The land has visibly changed with the introduction of trees. Animals — foxes, rabbits, armadillos — have returned. Ten years ago, the spring of once near-extinct river revived and began running through da Silva’s land, as well as through neighboring properties. Now, a trail leads from da Silva’s house to a group of medium-sized trees. The space is open for visits from educational institutions and tourists daily. This activity provides 35 percent of the business’s income. 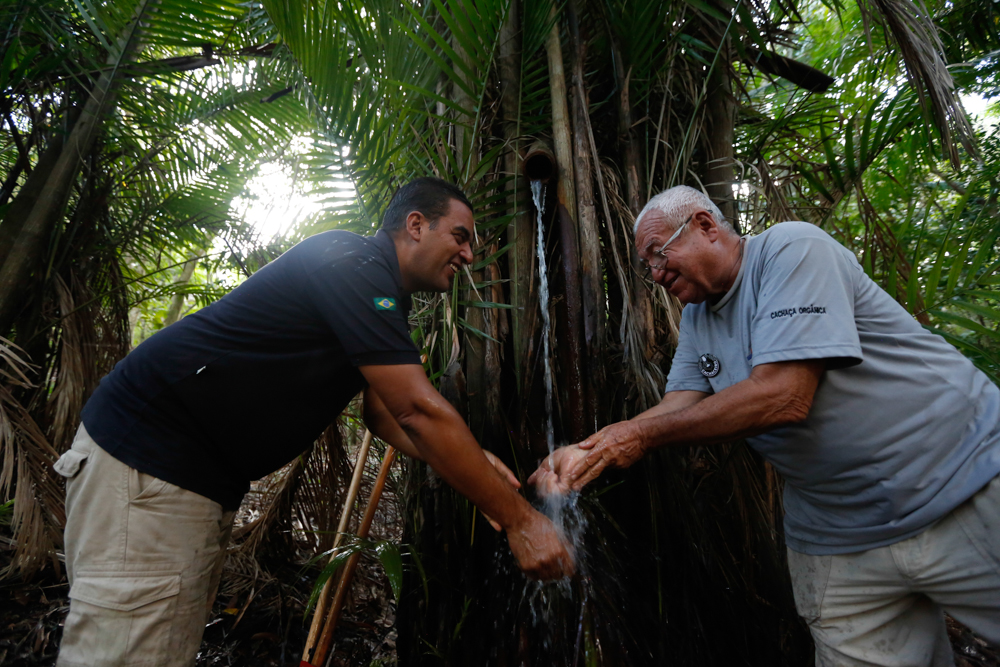 A SUSTAINABILITY LAB
In 2006, da Silva’s farm became a mill. Instead of organic vegetables, the family decided to produce organic cachaça. Sanhaçu Mill, once abandoned, now uses sustainable methods, reflecting the impulse that led da Silva to save this land in the first place. The idea came from Oto da Silva, an engineer, who encountered the organic production of cachaça while working as a technical assistant for a cooperative of producers supported by the Alternative Technology Service – Serta) in Vitória de Santo Antão, Pernambuco.

It was a challenge. In Brazil, sugar cane has always been misunderstood. People associate it with slavery and inequality. “It represents a monoculture, including all the problems such as reducing the diversity of natural life in the environment,” says Edísio Silva, an agronomist who teaches at the Federal Institute of Pernambuco (IFPE). “In the Northeast, there is still the problem of the method of harvest through burning, which kills some animals and leaves soot in the air.”

Consequently, the family never wanted Sanhaçu to conquer the cachaça market and then acquire the seal of organic. Instead, the idea was to become an organic producer  and then conquer the cachaça market. Currently, the company maintains the IBD (a Brazilian company known worldwide for auditing and certifying organics) certification, which offers two annual inspections and a rigorous evaluation of its production process. 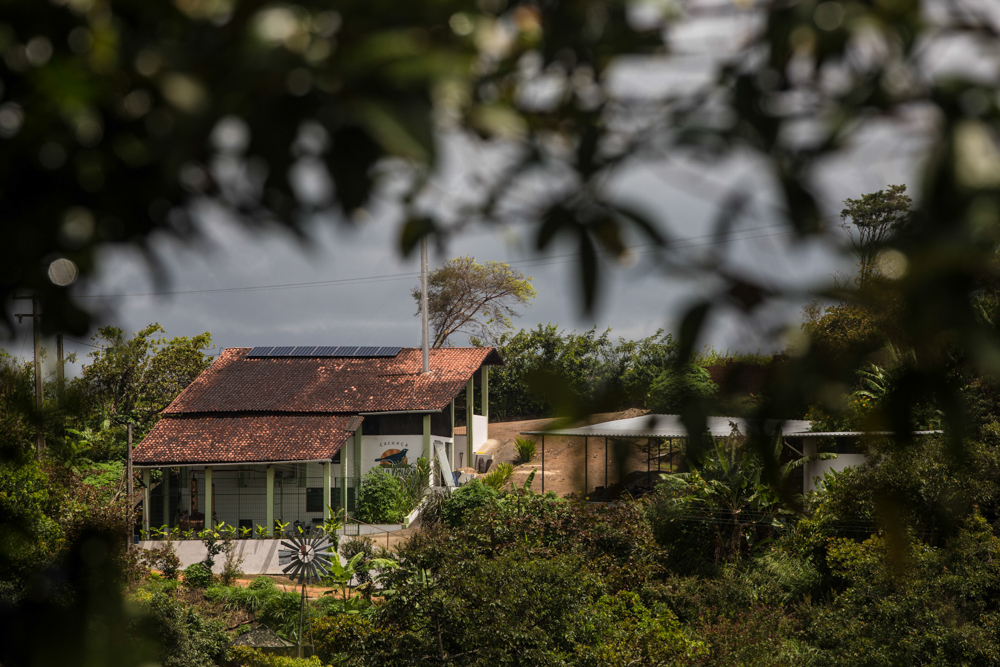 The alembic is totally powered by solar energy (Rafael Martins/Believe.Earth) 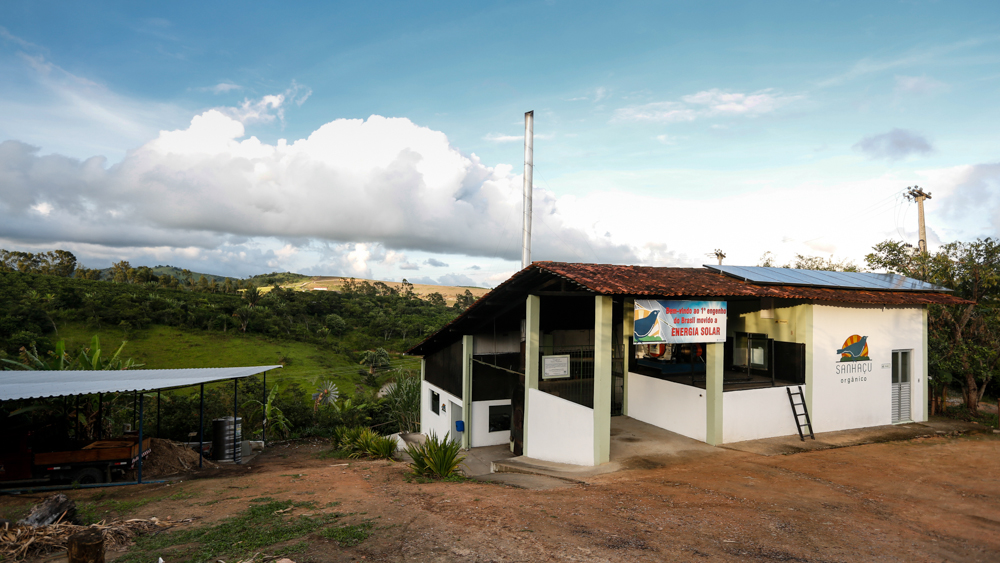 The project is open for visits from tourists and educational institutions (Rafael Martins/Believe.Earth)

In 2015, Sanhaçu became the site of the country’s first fully solar-powered alembic. 15 photovoltaic panels installed in 35 square meters (377 square feet), on the ceiling of the plant, can supply all of its production between October and January while generating credits from the state energy company for the eight off-season months. The average monthly energy bill of the property is R$ 40 (US$ 11).

But one of Sanhaçu’s greatest sustainable practices often goes unnoticed. In all stages of cachaça production, the company applies clean production techniques and reuses waste. The first stage is harvesting sugar cane without burning it. The family acquired a second property of 7.5 hectares in order to sustainably oversee this stage themselves.

According to Edísio Silva, the agronomist, along with interspersing the crops with native forest, this way of harvesting sugar cane is one of the most efficient ways to reduce the impacts of its cultivation. Unfortunately, not all of the economic impact is positive. “For the person who works cutting sugar cane, for instance, the yield is reduced by 30 percent when cutting raw cane [harvesting it without burning],” says Edísio. On the other hand, the workers’ health benefits from eliminating the practice of burning the cane.

Experience elsewhere in Brazil has demonstrated the environmental benefits of eliminating the practice. In São Paulo, Law 11.241/2002 mandated a gradual reduction in the burning of sugar cane by 2021. A 2017 agreement advanced the process, and the procedure was prohibited in January 2018. The 1st Inventory of Anthropogenic Greenhouse Gas Emissions in the State of São Paulo (IPCC) shows that, in 25 years, the state has been able to reduce the emissions caused by the burning of sugar cane by 44.3 percent.

On the other hand, this new approach requires a process of mechanization that is not so simple to implement elsewhere. “It requires stricter legislation in other states,” says the professor, explaining that reform could be challenging, since the Northeast area of Brazil is characterized by elevation, while São Paulo is in a plateau. The Northeast also has a greater variety of soil types. 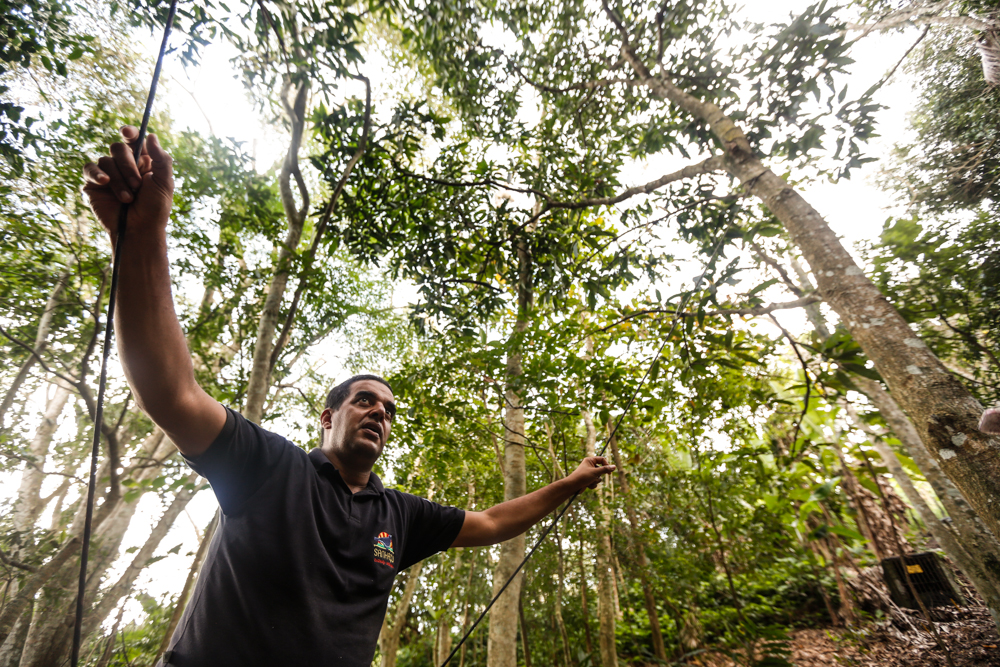 Oto da Silva left his job as a mechanical engineer in the steel industry to dedicate himself to the production of organic cachaça on his family’s farm (Rafael Martins/Believe.Earth) 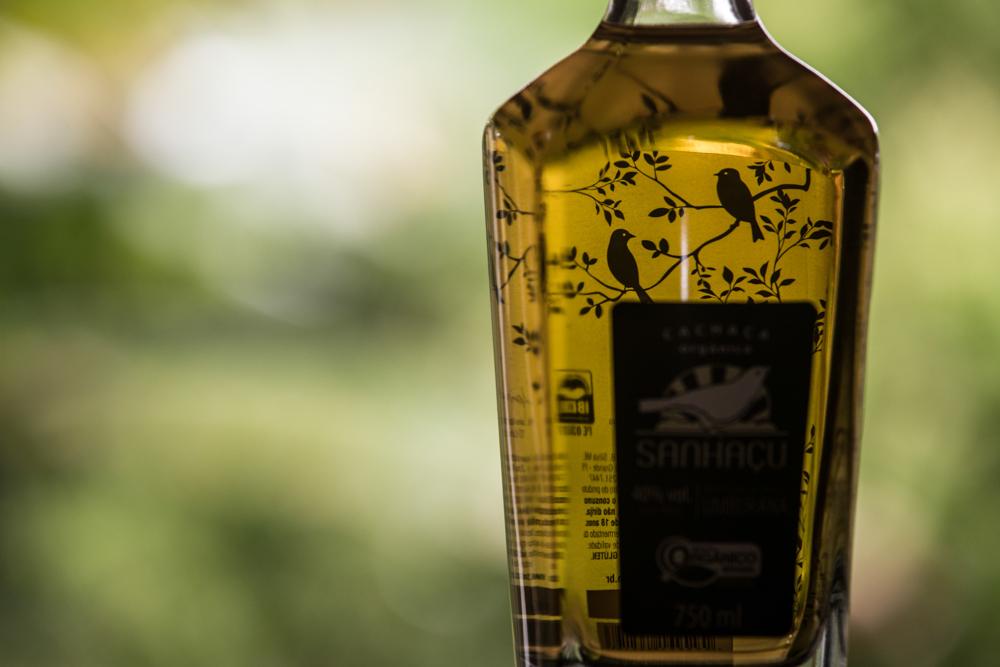 REUSING WASTE
The company also employs a sustainable approach to the process of grinding sugar cane. Sanhaçu grinds 200 tons a year, 30 percent of which is pulp. Instead of discarding the pulp into the environment, Sanhaçu uses one third of it to generate thermal energy (instead of natural gas or wood) to power the alembic, composting the other two-thirds.

The fermentation is a process that extracts the alcohol from the sugar cane juice, using the natural yeast produced in the mill instead of an industrial product. Vinhoto (stillage) is the resulting liquid, which can pollute the soil and groundwater, but rich in nutrients. At Sanhaçu, however, it is reused in a correct dosage to irrigate and fertilize the soil in the same time, and feed the animals, which means that 120 tons of vinhoto per year do not pollute the springs.

The liquid that comes out of the beginning and end of the distillation process, normally discarded, as it is of low quality, is, at Sanhaçu, turned into ethanol and used to power the family’s cars. Each year, the mill produces 1,200 liters of ethanol, which can supply two tanks of one vehicle per month.

These practices come out of Moacir da Silva’s constant research. Although he does not manage the company, he never stops improving upon its sustainable practices. One of his most recent ideas was last year’s purchase of two 25,000-liter barrels to collect rainwater, which is used for the cooling of cachaça as well as for cleaning.

The family feels proud when one of the mill’s many visitors asks about the two photos of a barren, treeless landscape. The answer comes full of details and memories of the devastated land of the past. But in that spot today is a thriving ecological reserve, in the middle of the forest.