Latin America is the world's most unequal region and presents itself as a laboratory for political innovation (Photo: Pixabay)

It cannot be denied that today there is a deep disbelief in political institutions in a large part of the democratic world, and recent events have challenged the notion that politics is capable of changing people’s lives for the better.

On the one hand, a discourse of fear is pointing to voters’ and citizens’ desire to be protected from all that is ‘different,’ guaranteeing individual privileges on the basis of a narrative of polarization, in which everything boils down to ‘us against them’. Political elites are proving incapable of understanding society’s new demands and of establishing a dialogue with its citizens, thus leaving a void which adventurers and populists are only too eager to fill. These populist figures are usually unprepared to deal with the complexity of public affairs and to come up with plausible alternatives for the management of the public good.

On the other hand, corruption scandals are revealing that the old way of doing politics – that is, favouring groups in exchange for high payments – reinforces voters’ perception that the system is a farce, run by a few for the few. This pessimistic perspective easily leads to despair and hopelessness.

The good news is that the situation is not as bad as it seems. While mainstream politics is going through a severe crisis and showing signs of collapse, a new way of doing politics is emerging on the margins of the old system, in which citizens and government are developing a more fluid relationship and giving rise to co-building experiments. These experiments are the building blocks of a new political paradigm for the 21st century.

We at Brazilian NGO Update started our activities two years ago under the hypothesis that there is an ecosystem of emerging political practices in Latin America that are pointing to new ways of doing politics.

Why Latin America? As innovation specialists point out, ‘where there’s need, there’s innovation’.

Indeed, because Latin America faces so many challenges – it is the most unequal region in the world -, it is at the same time a driver and a laboratory of political innovation. It is here that new technologies have been developed, some of which have been adopted around the world – for example, the participatory budget created in Brazil, or the software for political participation and voting DemocracyOS, created in Argentina and implemented in 15 countries.

Driven by the idea that the region has a lot to learn from itself and that it can also offer new solutions and new ways of doing politics to the world, we have carried out the most comprehensive mapping exercise of political innovation in the region. We have mapped more than 700 initiatives, from government policies to more informal/activist ones, addressing topics such as transparency, participation, political culture, social control, government 2.0, all of which share the aim of bringing citizens closer to decision-making.

This is not a trivial exercise, nor is it easy to implement, for it requires a new understanding of the role of the state and, above all, what it means to be a citizen in the 21st century. Since 2015, through our field studies, we have witnessed a new state emerging, more permeable to its citizens, and a new kind of citizenship willing to be co-responsible for the successes and mistakes of the state. This means that citizens and governments are not only part of the problem, but are also part of the solution. However, in order to get to the point where innovation is not an experiment but a reality, it is necessary to rebuild the social fabric - that is, we must learn to trust citizens’ capabilities. And this is quite a challenge in Latin America, considering that this is the world region with the lowest reciprocal trust between citizens and institutions. So how can we build trust in societies that distrust the state so much? The answer is: through dialogue.

There already are numerous examples of this happening in Latin America, through digital tools that help governments be more transparent (for example, Borde Político/Mexico and DataUy/Uruguay) and that help citizens take part in public policy decisions (Ciudadano Inteligente/Chile and Wingu/Argentina); citizen advocacy groups that pressure parliamentarians and public managers to meet civil society’s agenda (Nossas Cidades/Brazil and Fundación Equales/Chile); electoral experiments based on creativity and a narrative of trust that helps overcome party oligarchies (Bancada Ativista/Brasil and Wikipolitica México); new political parties that incorporate radical democracy in their internal processes (Revolución Democratica/Chile and Partido de la Red/Argentina), and public innovation labs that integrate citizens in the co-creation of public policies and the re-building of the role of the state (Laboratorio de Gobierno/Chile and RutaN/Colombia).

These are just some examples, out of a variety of formats and initiatives that seek to build a new way of exercising democracy in Latin America. But political transformation will not come from a single place, or only from the state or civil society, but from both together, like in a dance, where each partner knows they have different steps to take but follow the same beat. Civil society signals where it wants to go, but it is governments and the state that have the capacity to institutionalise the demands and translate them into public policies and laws.

What we are talking about is a type of politics that is more humane, more accountable, more transparent, tolerant, organic, empathetic, open to recognizing its own mistakes and to experimentation, and focused on the public good.

It is important to remember that we are at a critical moment, but it is powerful and full of opportunities. We have the opportunity to use all the latent indignation in society to create new relationships and new social pacts. We can find ways to contribute to that vision, to prevent the empty space from being filled by those who seek individual benefits, and keep indignation from reaching a point where it leads to social isolation and cynicism or, in the worst cases, violence.

We at Update are optimistic. We seek to promote the ecosystem of political innovation in the region with the aim of strengthening and updating democracy in Latin America. We are one, among many, seeking to build this counter-narrative, and we do this by revealing  the variety of people – in our country and abroad  – who are creating and experimenting in new ways of doing politics. Our aim is to offer new examples and references, especially for those who no longer have any hope or are about to lose it. Not all is lost, but we must be careful not to present the wrong perspective. I invite the reader to have a look at what Update is presenting. And be warned: you will fall back in love with politics. 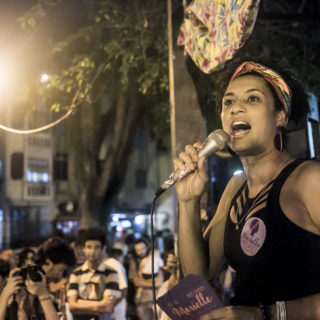