The indigenous tribe that escaped genocide 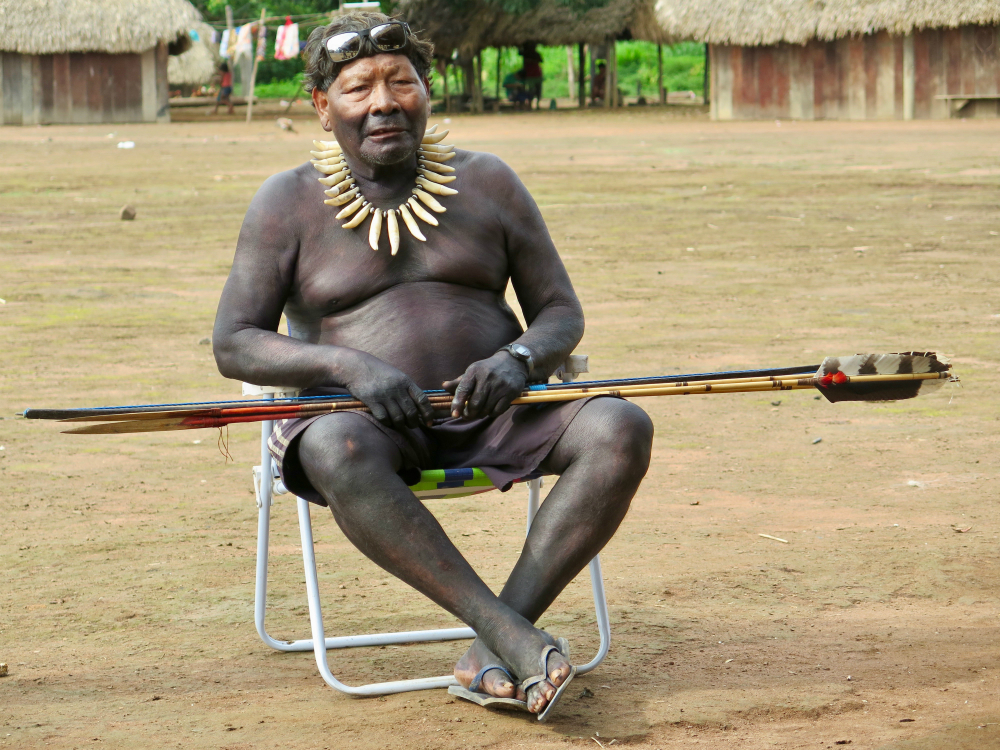 Akã Panará led his people's fight to return to their traditional land: "I was very happy to return because this is our place, this is where our traditions lie" (Maria Fernanda Ribeiro/Believe.Earth)

His body was painted from the neck down in the black dye of the genipap (a fruit used by indigenous people for body painting), which takes days to come off.  He wore nothing but green nylon shorts that went down to his knees, a necklace made of jaguar teeth, and mirrored sunglasses that looked like those of a surfer.

He has the posture of an old warrior who still has the strength to fight if necessary, but as soon as the Panará’s elder statesman starts telling the story of his people’s survival (read more about that here), a smile comes across his face.

2017 marked 20 years since the Panará concluded their return to part of their ancestral lands on the Iriri River, on the border between the states of Mato Grosso and Pará, in Brazil’s Amazon region. They left the Xingu Indigenous Park after a period of forced exile that they could not have imagined would last so long. Akã Panará in 1991, on his first return visit to his ancestral land since his people’s exile in the 1970s (Photo: Steve Schwartzman)

The Panará, also known as the giant Indians – there is a myth that they are very tall, although their average height is only 5′ 6″ – used to live in the basin of the Peixoto de Azevedo River, a region that spanned from the town of Colider, in Mato Grosso, to the Iriri River in Pará. Their plight was an example of what the so-called “Brazilian miracle” — the economy during the dictatorship era — wrought on its indigenous people. The the BR-163 highway, constructed in the 1970s, cut across the forests of Mato Grosso and Pará in order to connect the cities of Cuiabá and Santarém, piercing through the region where the Panará lived, bringing disease and death along with it.

After contact with the white man during the construction of the highway, the Panará’s population dwindled to fewer than 80. “Cláudio [Villas-Boas, one of the activists responsible for establishing the Xingu as protected land] asked us to go to the Xingu park, otherwise we would all die, so we went,” recalls Akã during an interview behind his house in the village of Nãsepotiti, where he now lives. “We started farming in Xingu, but neither the land or the forest were good. Nothing would grow. Corn, manioc, banana, none of them grew. The forest was also poor for hunting and the area didn’t have the fruits we were used to eating.” The natural resources at the Xingu park are different from the Peixoto de Azevedo region, which made basic subsistence, from farming to building houses, much more difficult.

They moved their village around the approximately 10,000 square miles of Xingu Indigenous Park seven times, in search of conditions similar to those they had enjoyed on their ancestral land, but none of the places could yield the abundance of their previous life. One indicator of their difficulty in adapting to Xingu was their low birth rate. Akã recalls asking a cousin, “Do you think there’s anything left of our traditional land? Because this place is not working.” So began the “giant Indians’” struggle to find out whether the whites had left any of the forest standing, or if they had already “devoured everything” with their tractors and machines.

With help from the Centro Ecumênico de Documentação e Informação (Ecumenical Center for Documentation and Information – CEDI) – one of the organizations that would later become the Instituto Socioambiental (Social and Environmental Institute – ISA) – they did a flyover of their ancestral land in 1991. A region that used to grow trees and food had been ravaged by deforestation at the hands of miners and loggers.

According to Márcio Santilli, one of the founders of ISA, the Panará were outraged by the devastation they found, 20 years after leaving their traditional lands. But from above they could see that a piece of forest was still standing. “We will stay, there’s still some land left, the white man didn’t devour everything!” Akã recalled deciding.

They started negotiations with Funai, Brazil’s equivalent of the Department of Indian Affairs, and a long judicial battle would not only grant the Panará the demarcation of approximately 495,000 hectares of land in 1996, but also a compensation of 1.2 million reais (approximately US$350,000). This made them the first indigenous tribe in Brazil to receive compensation from the government for moral and material damages resulting from the construction of the BR-163 highway. 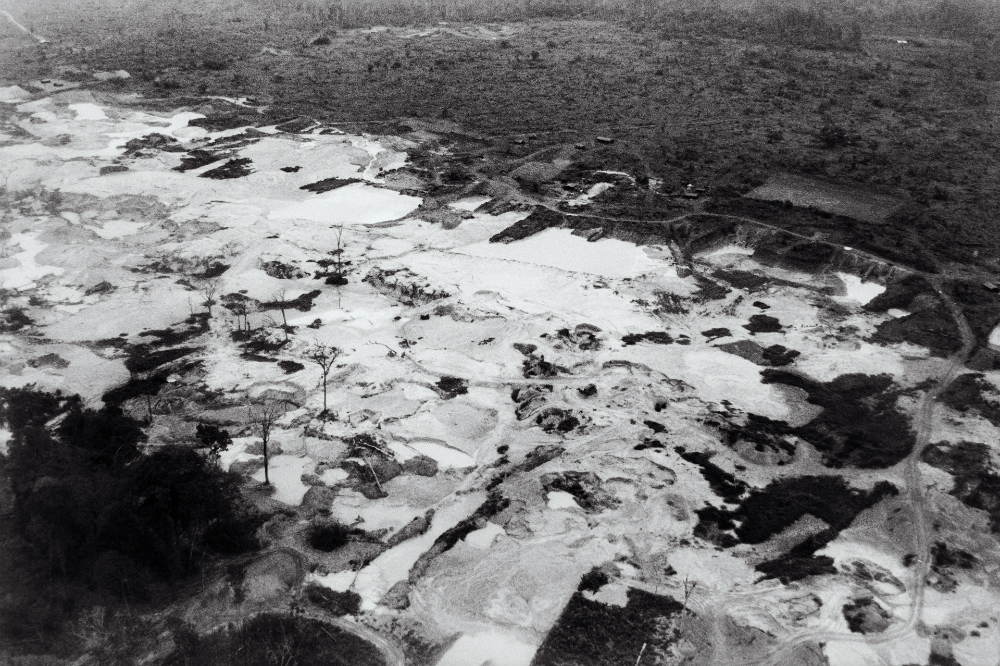 Aerial photo taken during the reconnaissance flight over the Panará’s ancestral land, near the Peixoto de Azevedo River: The forest had been devastated by miners and left the Panará desolate (André Villas-Bôas/ISA) 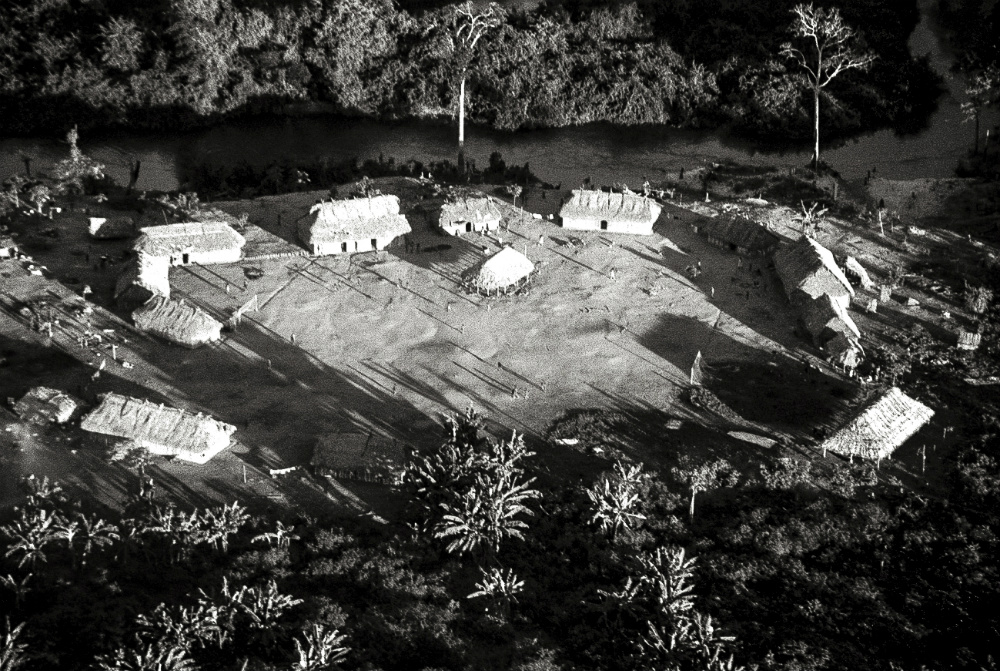 After opening a clearing, the first Panará settlers started building the houses of what is now the Nãsepotiti village, as seen in this photo from 1997 (André Villas-Bôas/ISA) 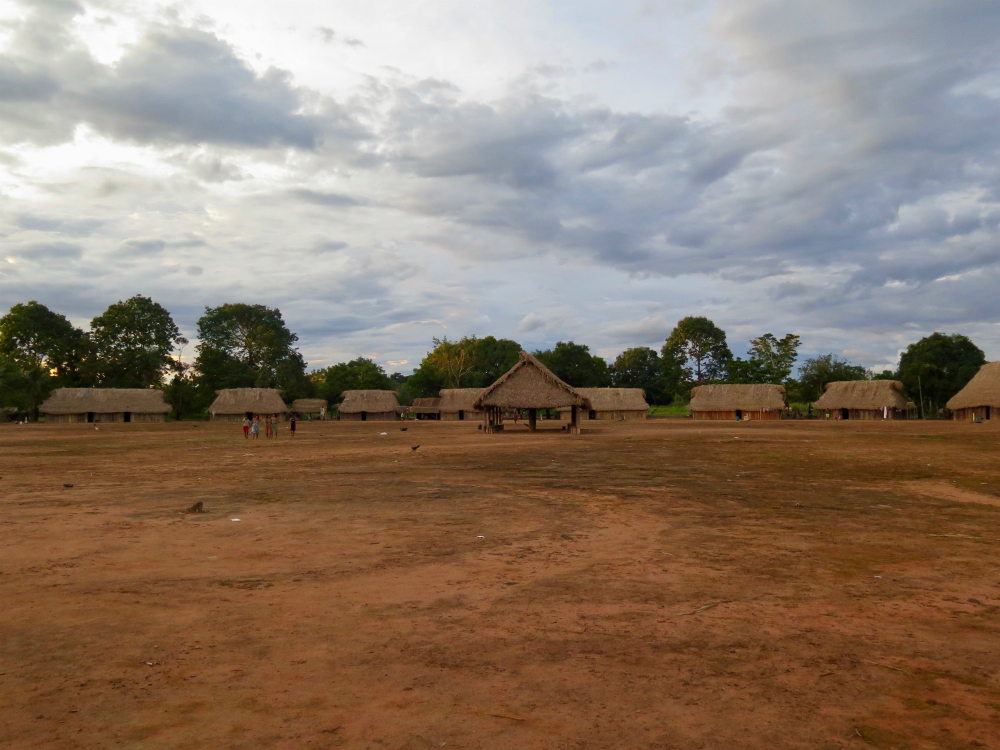 Nãsepotiti is the main village of the five Panará settlements, whose population is now over 600 (Maria Fernanda Ribeiro/Believe.Earth)

THE RETURN
The Panará are considered the last descendants of the Southern Cayapó, a large group that once lived in south-central Brazil but had, for much of the twentieth century, been considered extinct until the Panará were contacted in the 1970s.

At that point, they occupied ten villages and their estimated population was between 300 and 600. By the time they were transferred to the Xingu Indigenous Park in 1975, they had a population of 79. This information is recorded in the book Panará, a Volta dos Índios Gigantes [Panará, the Return of the Giant Indians], published by ISA, featuring a photo essay by Pedro Martinelli and articles by the journalists Ricardo Arnt, Lúcio Flávio Pinto and Raimundo Pinto. The Panará’s return to their ancestral lands began in 1995, but it would take another three years before they completely left the Xingu park to open the Nãsepotiti village with 178 people.

The Panará currently have over 600 members spread over five villages. If it was abundance they were after, they got it. Today they plant corn, potatoes, yams, bananas, manioc, pumpkins and peanuts. They also have access to lots of fish and game. Their children today grow up strong and healthy. The chief of the Nãsepotiti village, Sinku Panará, was the first child born in the Xingu park. “I want people to see that we have returned and succeeded” (Maria Fernanda Ribeiro/Believe.Earth)

“I was very happy to return because this is our place, this is where our traditions lie and where we find our native food. That’s why we have grown. Lots of babies have been born here,” explains Akã.

Sinku Panará is the chief of the Nãsepotiti village, and the first child born in the Xingu park. He remembers Akã’s travels and the meetings that were held to discuss their return to their ancestral land. “I would go out hunting with my father and he would always say that the Xingu wasn’t good, it didn’t have edible fruits, and that we had to go back [to the forest] because there was good food there,” Sinku recalls. “This is why I am happy to see the number of children in the village. And I want us to grow even more so the white man can see that we have returned and succeeded.” A Panará child: after returning to their ancestral land, the tribe’s well-being is considered one of the reasons for the villages’ growing population (Maria Fernanda Ribeiro/Believe.Earth)

All rights to this content reserved for Believe.Earth and El País.
Article partially funded through a grant from the International Center for Journalists (ICFJ).
This content is promoted in partnership with Instituto Socioambiental (ISA) and Greenpeace.