A Uruguayan artist based in Brazil created a bike frame made from recycled plastic and the idea spread around the world, including to Colombia 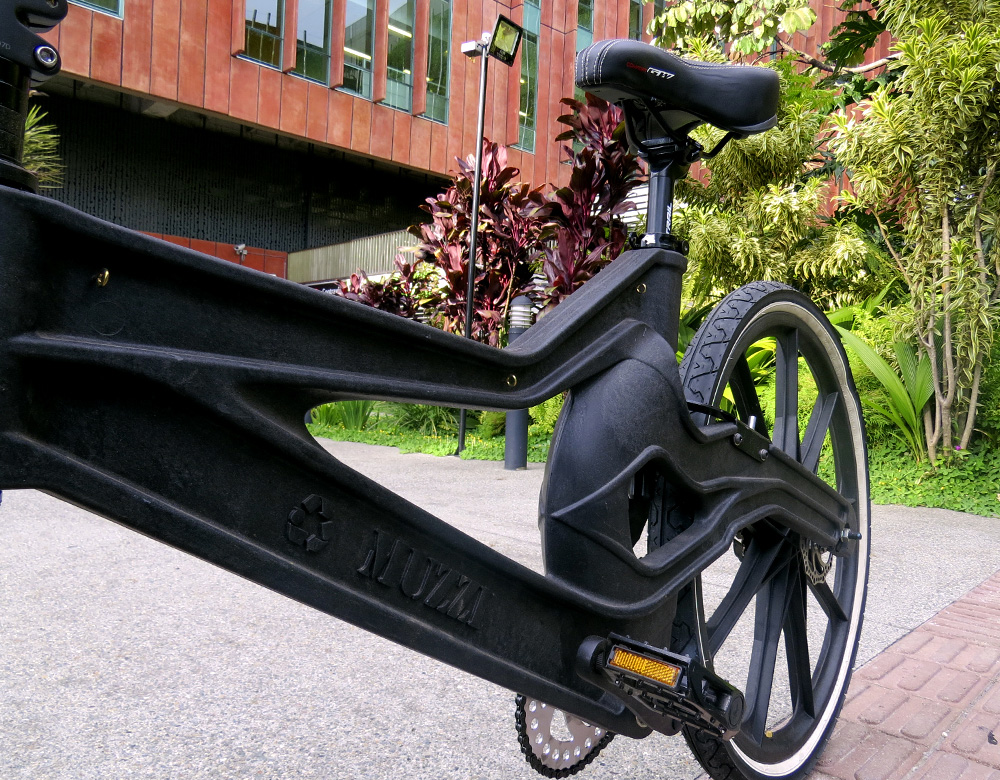 His Sao Paulo factory can take in over 17,000 tons of recycled plastic every year, using it to create tens of thousands of his patented Muzzicycles, plastic, and biodegradable bicycle frames. His process uses far less energy than is required for making traditional metal frames, according the company’s website. About 200 plastic bottles go into each frame.

Plastic makes up 10% of the composition of all solid waste on Earth, according to the World Bank. Muzzicycles, founded in 2012, is one of a growing number of green enterprises applying capital and creative thinking to the problem of figuring out what to do with all our plastic trash.

Juan Carlos Seguro and his bike. The frame, wheels, pedals and saddle are made with recycled plastic (Valeria Zapata/Believe.Earth)

ONE MAN’S TRASH….
Juan Carlos Seguro, owner of Eco Muévete Seguro in Medellín, Colombia, is one of Muzzicycle’s local distribution partners. He recounted the origins of his company, which he founded in 2012, in an interview with Believe.Earth.

“I noticed that the waste generated by many textile companies was thrown into the garbage cans,” said Seguro. He arranged to have the discarded material delivered to him with no next step in mind. “When I saw my basement already full of plastic,” he said, “I wondered what I would do with that.”

He met with Muzzi and arranged to ship everything to Sao Paolo. There, it was mixed with fresh plastic and molded into frames, wheels, mudguards, pedals and seats. Seguro marketed his bikes as Re-ciclas, or “Re-cycles.” The dye is applied to the frame when the plastic is hot and liquid (Valeria Zapata/Believe.Earth)

POWERED BY PEOPLE
Seguro has since partnered with a local recycling firm, Kaptar, which operates a network of bottle collecting machines that link to smartphone applications. Bottle collectors, by depositing bottles in the machine, earn points that can be spent on benefits such as subway tokens and movie passes.

“Once a man told me he wanted one of my bikes, but he did not have any money to buy it,” Seguro said. “I told him that if he brought in 1,000kg of plastic, he would get it at no cost.”

In a few days, according to Seguro, the man returned and started cycling his new Re-cicla through the streets of Medellin.

The frames can be used for traditional, pedal-powered bikes, or for electric ones, with engines from 250 watts to 1,500 watts, ranging about 50 km. The frames never rust, and the plastic frame reduces vibration while riding.

Seguro charges about $315 for pedal bikes and around $670 for electric ones. Re-ciclas are provided, for transportation and leisure, at hotels and ecotourism sites in Colombia (Valeria Zapata/Believe.Earth)

A PROJECT WITH IMPACT
Colombian firms are incorporating the recycled bikes into their social responsibility programs.

Bavaria, the country’s the largest brewery, bought 170 Re-Ciclas with frames made from the PET bottles used to package the company’s beer. The bicycles were given to low-income children who’d previously been forced to walk up to two hours to get to school in the village of El Agizal, near the city of Itagüí.

On the Caribbean island of San Andres, where many residents bike, but salt from sea accelerates the formation of rust, the local government has plans to create a public system for sharing the plastic bikes.