Regina Nogueira: Everything that is alive must be nourished

Doctor and social entrepreneur, Nogueira works on the food security of people of African descent 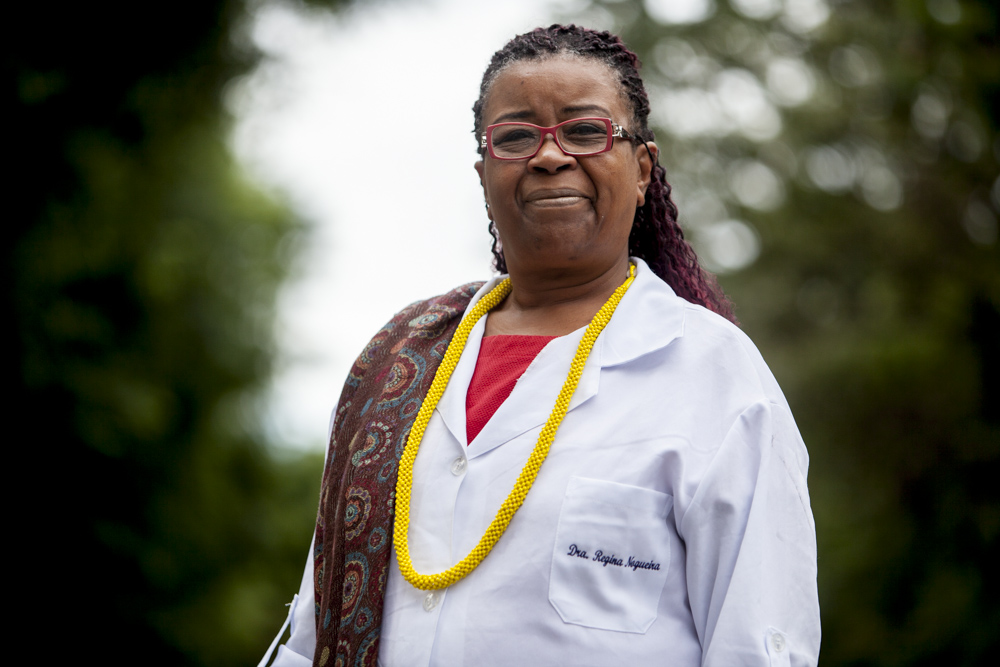 Regina Nogueira is a doctor and one of the founders of Banco Grão (Seeds Bank), the first digital community bank for people of African descent (Zé Gabriel/Believe.Earth)

Care and respect for the human being have determined Regina Nogueira’s life, 56. The doctor and  activist, part of the National Movement of Bantu People, which is composed by communities and resistance groups from this culture, is also known as Kota Mulanji. The word “Kota” designates a political role and position. “Mulanji” means “fighter.” The name reinforces the pediatrician’s identity as a social entrepreneur and champion of the black population’s health.

Nogueira is one of the people responsible for founding the Cooperativa dos Povos Tradicionais de Matriz Africana (Cooperative of People of African Descent) in Porto Alegre city (south of Brazil), and Banco Grão (Seeds Bank), the first digital community bank for in Brazilians of African descent. Both organizations were created by the National Food and Nutrition Security Forum of People of African Descent, which Nogueira chairs. The cooperative brings black entrepreneurs together to develop production and consumption, strengthening the economic position of this group.

Nogueira has a house in Pelotas but works as a doctor on duty in two São Paulo hospitals. She has been a prominent figure in public health for 33 years, mainly focusing on the black population. She is also distinguished by her political activism. Nogueira joined the department for the Coordenação da Mulher (Coordination of Women) in Rio Grande do Sul’s state government and, in 2000, took over as coordinator. Under her leadership, the state was the first to include in the neonatal heel prick a test for sickle cell anemia, a disease that mainly affects the black population.

She is currently pursuing a Ph.D. in biomedicine in Argentina, where she studies resources for evaluating policy on the health of the black population in Brazil, with an emphasis on Rio Grande do Sul. Her inspiration comes from her family, which is full of female role models who shape her identity. “My paternal grandmother, my mother, and, also my aunts, are part of what I am,” says the doctor, who is also the mother of two women, in her interview with Believe.Earth. Nogueira with a string of beads, an object considered sacred. It is used to connect with nature (Zé Gabriel/Believe.Earth)

Believe.Earth (BE) – How did you become interested in health?

Regina Nogueira (RN) – When people ask me that question, I’m always in a tight spot. Since I was a child, I wanted to be a doctor. All the women from my family were caretakers. In Pelotas, 90 percent of black women were maids. In my family, only my aunt was a teacher. I’m terrible at housekeeping. I thought, I must do something that is more valued and at the time nothing was as valued as being a doctor. It’s not very romantic, but it was that way.

BE – How did you enter medical school? Did your family encourage you?
RN – I applied for two entrance examinations. I took the second with my family’s support. My elders dreamed about their daughter and youngest sister becoming a doctor. My brother took time off from his job to take me to the entrance examination. My father went to the UFPEL [Federal University of Pelotas] campus with me on the first day. I’ve always studied at public school. I had two black teachers, Mrs. Judite and Mrs. Nizah, at Simões Lopes school. I remember that there was a party on the day the entrance examination results came out. Mom painted the walls without plaster to host the neighborhood. My first teacher and my childhood friends came to see me.

BE – What was your experience establishing the cooperative, solidarity fund and bank for the economic promotion of people of African descent?
RN – We’ve set up in Rio Grande do Sul the first development system to take into account the basic principles of people of African descent. These are voice, respect for the elder, responsibility for the younger, nature as a divine cycle in which everyone has a purpose even though the elder is sovereign. In our system, the cooperative has come the closest to conforming to these principles. Our cooperative has been in development for two years and will be launched in 2018. It seeks to act in the collective consumption and recovery of our productive vocation, gathering producers of honey, palm oil, herbs and other products. The logic is to lower the price as well. We’ve started with 30 founders, but we already have more than 100 members. The majority are women.

The fund was born before the cooperative and follows the logic of the solidarity organization, as we’ve learned it from the black clubs. The Solidarity Fund is for those who declare themselves to be of African descent. It is a collective savings account into which each person deposits R$ 20,00 (US$ 6) a month and, after six months of contributing, can apply for credit for projects of collective consumption, production or keeping tradition alive. We’ve also created a digital bank and currency. The digital bank uses an E-money platform and operates with the digital currency, called Grão (seeds). We first experimented with it at the 2017 Fórum de Resistências (Resistance Forum) in Porto Alegre. Each person who registered in the forum deposited a “seed” which was used as currency for each activity developed there. Now, we are looking for establishments that accept the currency. We already have around 500 account holders. Everything is new.

BE – Brazilians of African descent share a particular food culture, a willingness to “talk to the divine part of every living being.” How did you absorb these principles throughout your life?
RN – I was born Regina Barros Goulart. I grew up with certain values such as to keep alive the family, samba, soccer team, my school, my club – the common principle was the root. Then I got married and the surname Nogueira was added to my name. Linked to this new family, I learned to care not only for those related by blood: There was something bigger, the village, city, state, your country. Later, I met Mametu Ndandalakata and Bantu people, and I was invited to be part of their culture. There was no conflict with the roots and with the community. I learned that I had to be nurtured by myself to work for the collective. I became Mulanji, the fighter, with the function of being Kota. In this tradition, I am not only the biologist, nor only the collective – I am also mythical. I am a bio, mythical and collective body. And the body must be fed and cared for. “Now is the time to be sovereign over your body, your economy, and your diet,” says Nogueira (Zé Gabriel/BelieveEarth)

BE – What can African food culture teach us?
RN – It is a domestic, ritualistic culture, made for all living beings and by living beings that do not suffer. Everything that is alive must be fed. Someone told me that what is dead, when fed, comes back to life. Look at the piece of plaster: When you add water, plants, smells, it comes back to life. In the same way that a dead body lives in the fertilizer, in the flower, in the food. This culture feeds and is fed to maintain life. I think that is the main teaching.

BE – You are a social activist and active in the black movement. What was this journey like?
RN – In the 80s, I was 22 and a black doctor, but I found out that I was not the same as my white colleagues. I did not go to all the places they used to go, I had no doctors in my family to help me get a job. I studied pediatrics at Ernesto Dornelles Hospital and went straight to the neighborhoods of Porto Alegre. I knew the lives of those who organized themselves into unions, parties, and movements. I discovered the capitalist system, learned to identify racism, machismo and to admire those who showed me how to think that way. I was someone who used to think differently, wanted to unite people, but from that point on there was no going back. In 1986, with Dr. Fatima de Oliveira, I set up the first program to test for sickle cell anemia. I went to Beijing in 1995 to the World Conference of Women, as part of the delegation representing black women of Rio Grande do Sul. Since then, I have launched, with my husband, the Grio Centro Pedagógico de Reterritorialização e Cidadania Negra (Pedagogical Center for Black Citizenship). My journey has been in government and in public health, but it is from the communities of African descent that I learned how to face the system and racism.

BE – How do you see the Brazilian black movement nowadays?
RN – We are reproducing what we did in the late 18th century because the pressure is the same. We face a reality in which they are killing blacks nowadays just as they killed those in the old quilombos. Black women are being raped. White men try to crush any kind of resistance and governments help. But, we are resisting with the weapons we have now. The system does not give clearance. Each of our victories ends up helping those who hold power. I used to sell black cloth dolls. Now, big brands can distribute and sell them more expensively. But, we do not want to strengthen the system through our consumption anymore. Now is the time to be sovereign over your body, over your economy, over your diet. That is where we had the biggest victory, resulting from both the mistakes and the correctness of the black movement.

BE – Do you believe that there has been progress in the condition of black women in Brazil?
RN – The system evolutionist in me still maintains we are in social captivity. But, if I think from this evolutionary logic, there has also been progress. We got a place at the university, we are part of a middle class, but, we’ve advanced individually, not collectively. We are still the most vulnerable to violence, we haven’t changed the pyramid. Those who are down below continue to suffer. What we have achieved is trying to keep ourselves intact within that unfair system. We need a circular and upward system. Not in the logic of “I move forward and bring you with me”, but, I help you and we work together.