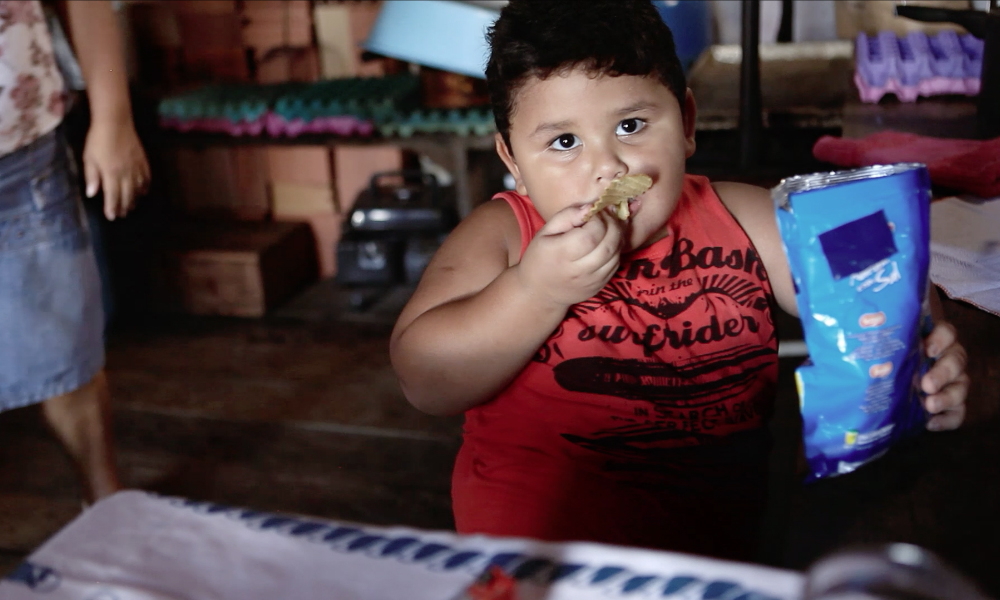 During a scene in the documentary "Muito Além do Peso" (Way Beyond Weight), a boy eats a highly processed snack (Photo: Maria Farinha Films)

One in three Brazilian children is overweight, according to data from Brazilian Institute of Geography and Statistics (IBGE). It is a plague that brings not only visible health problems, but also other ills that can go unobserved. People who are overweight or obese in childhood can be emotionally scarred by the experience. They may be  bullied and can develop anxiety and low self-esteem.

People often assume that it is the parents’ fault when children are overweight. “We’ve gone through a food transition, from consuming in natura foods to eating ultra processed ones, like instant noodles, snacks and soft drinks, which have a lot of salt, sugar, fat and flavor enhancers,” says filmmaker Estela Renner, director of the documentary Way Beyond Weight (Maria Farinha Films/2012). A film that was seen by millions of people, the documentary makes clear the role that the food and beverage industries and advertising aimed at children play in the epidemic of childhood obesity. “It’s easy to simply blame parents, genetics or children’s compulsion,” says Estela. “Way Beyond Weight gave voice to people who already cared about this issue and who knew that it was not just their own responsibility.” A mother reports the difficulties of helping her overweight child in the documentary “Way Beyond Weight” (Photo: Maria Farinha Films)

By showing children with health problems that used to only come in adulthood, such as type 2 diabetes and high cholesterol, and exploring the implications not only for them but for the society as a whole, the film caused general discomfort. According to Renner, Way Beyond Weight was watched by corporate executives at the headquarters of companies such as Nestlé International.

Bringing the subject up for discussion helped increase pressure on the brands, which then announced changes. Despite continuing direct sales of its products in the Amazonian riverside communities, Nestlé suspended the operation of a floating supermarket shown in the documentary. In 2016, Ambev, Coca-Cola and Pepsico changed the portfolio of beverages delivered directly to school canteens, replacing highly sugary products with coconut water, juice that is 100 percent fruit, mineral water and dairy products that meet children’s nutritional needs.

Using films to promote discussion that can change society is one of the reasons that Maria Farinha Films, in which Renner is a partner, has achieved certification, from B Corp, an international group that recognizes companies committed to generating a positive impact on society and the environment. Renner (left) and producer Juliana Borges (right) point out the Nestlé boat in Pará, whose sales were suspended after the launch of “Way Beyond Weight” (Photo: Maria Farinha Films)

AT THE TABLE
Small actions also make a huge difference in the process of adopting a more conscious approach to eating. Food engineer Mayra Abbondanza noticed that people could change habits not only at the table, but in the relationships between parents and children. Children’s natural curiosity, even in the kitchen, can make them agents of change at home.

Abbondanza founded Mayra Alimentação Infantil (Mayra’s Food for Children), a consultancy to help families eat better and get closer emotionally. “The kitchen is the perfect place to be,” says the food engineer and author of O Que Fazer Para Meu Filho Comer Bem? (How Can I Get My Child to Eat Well?) (DBA/2013). “Talking while cooking delicious food, gathering around the table to enjoy the meal and talk about how the day was, strengthens the bonds between people.”

The consultancy is also certified by B Corp and teaches healthy recipes for baby food, a children’s menu and a balanced weekly menu for families. Abbondanza has four children and has even created educational games and comic books to teach them what a healthy diet is, through play. The project will include an app and a book soon. “When I say to bring play to the kitchen I don’t only mean, make a face with the rice and use peas as eyes,” she says. “I mean ask children for help: washing the leaves of a vegetable, cutting the slices of fruit, getting involved in whatever way their age allows.” Food engineer Mayra Abbondanza with two of her children, Pedro and Julia: A mission to teach families to eat better and be closer emotionally (Mayra Abbondanza/Personal Archive)

Abbondanza’s efforts to change the story of this generation of children have reached lower-income families. In one of her projects, she offered cooking classes at a department store in the Heliópolis neighborhood in suburban São Paulo, teaching the locals how to cook using vegetable peels and stalks, as well as encouraging adults to let the little ones help them in the kitchen. “I will never forget a boy who told me that he had prepared a sardine recipe that I had taught,” says Abbondanza. “He said, ‘Auntie, I made it for my mother and she did not believe it!’, showing that he was very impressed with his own abilities.”

B Corp helps entrepreneurs like Abbondanza and Renner to close deals with other companies that share similar ideals. “Today, many companies can work with purpose and generate a positive social or environmental impact,” says Renner. “Our idea is to show that you can do it by offering fair and meaningful work to employees, so they also have a better life.”

We need to look around and see who is standing next to us, says the filmmaker. “We all live on the same planet, so everyone is affected by the population’s well-being and by social and environmental problems.”