The Panará people's return to their ancestral land after two decades of exile led to a revival of traditional habits, happiness -- and lots and lots of babies 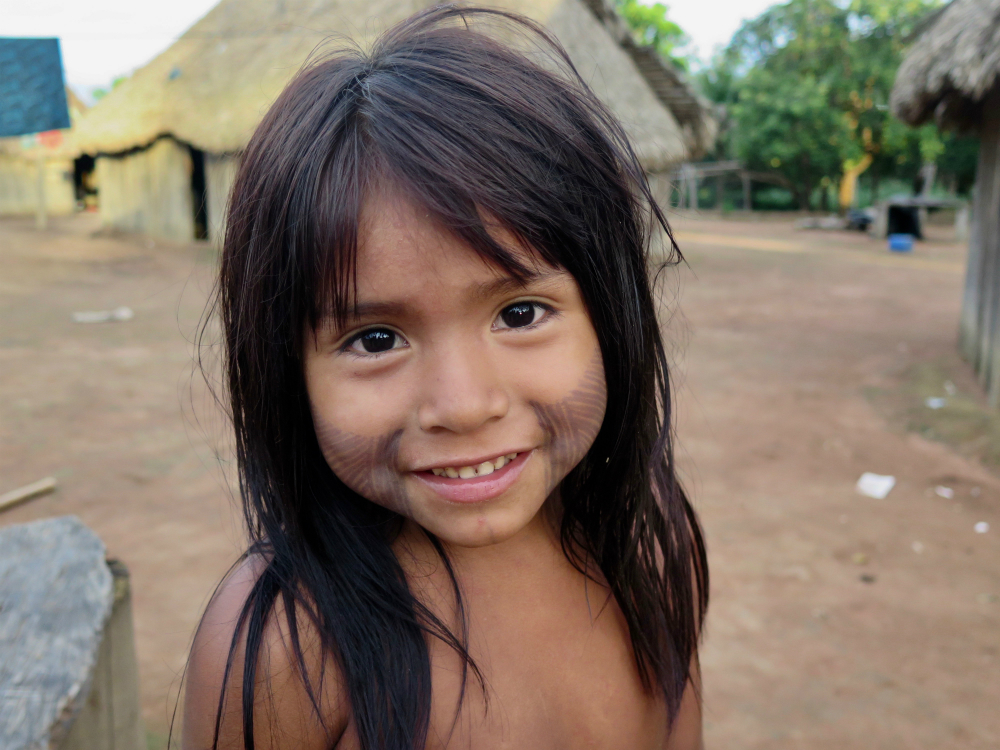 Children of all ages are everywhere in the Nãsepotiti village (Maria Fernanda Ribeiro/Believe.Earth)

Sitting on a bench at dusk in one of the Panará villages, a visitor is surrounded by kids having fun. An excited group of 7 and 8 year old boys sharpens a spear, or grabs a rock for their slingshot. Girls pause their game of soccer with a tennis ball and come talk and laugh with the Brazilian journalists, even without speaking Portuguese. An impressive group of 5 or 6 year olds jump rope, holding babies, without losing their breath or their balance. The children of Nãsepotiti are never bored.

It’s hard to imagine what these children’s daily life and, more importantly, energy and mood would be like if they lived outside of the Panará Indigenous Territory, which is located in a piece of the Amazon Rainforest between the states of Mato Grosso and Pará. To their grandparents, the answer is clear: they would not be as happy, strong or healthy as they are today.

The basis of this claim lies in the life story of these elders, who remember the (approximately 20) years they spent in the Xingu Indigenous Park very well. “It wasn’t the same as here. The earth there was weak, there wasn’t much fruit. There weren’t as many babies as here,” recalls the midwife Kreenpy (pronounced Kreem-pahn) who, like many Panará elders, does not know her own age. “In the Xingu, our children were skinny,” says another elder, Seiakã, while weaving a basket. “It was sad. Here we are very happy.” 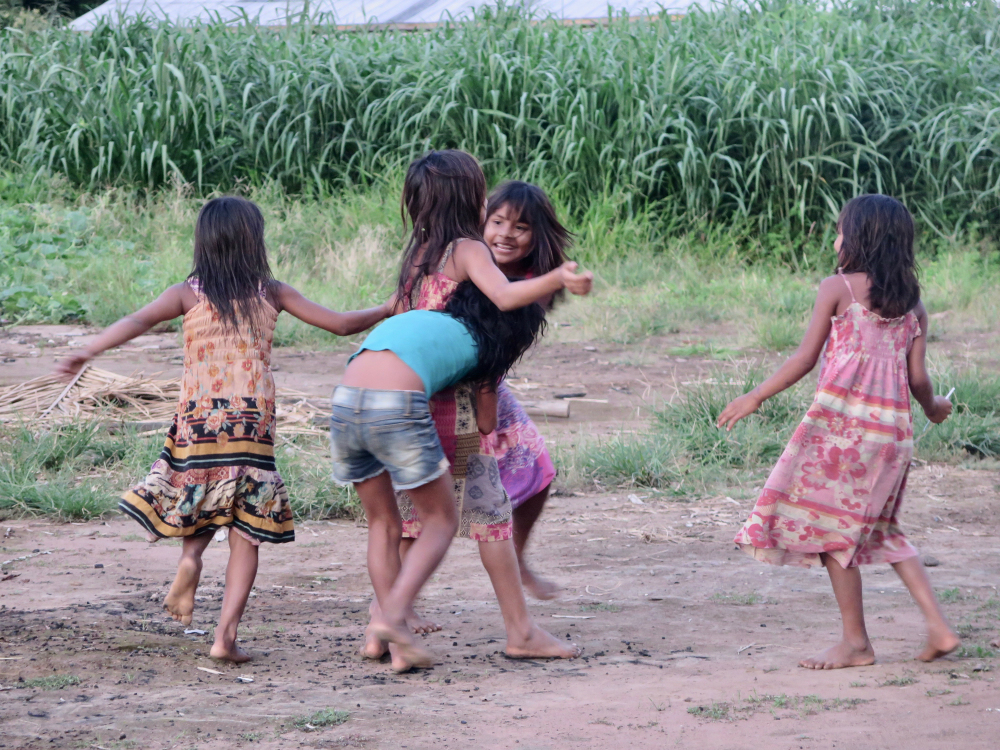 A group of children plays next to the houses in the Paraná Indigenous Territory’s main village (Maria Fernanda Ribeiro/Believe.Earth) 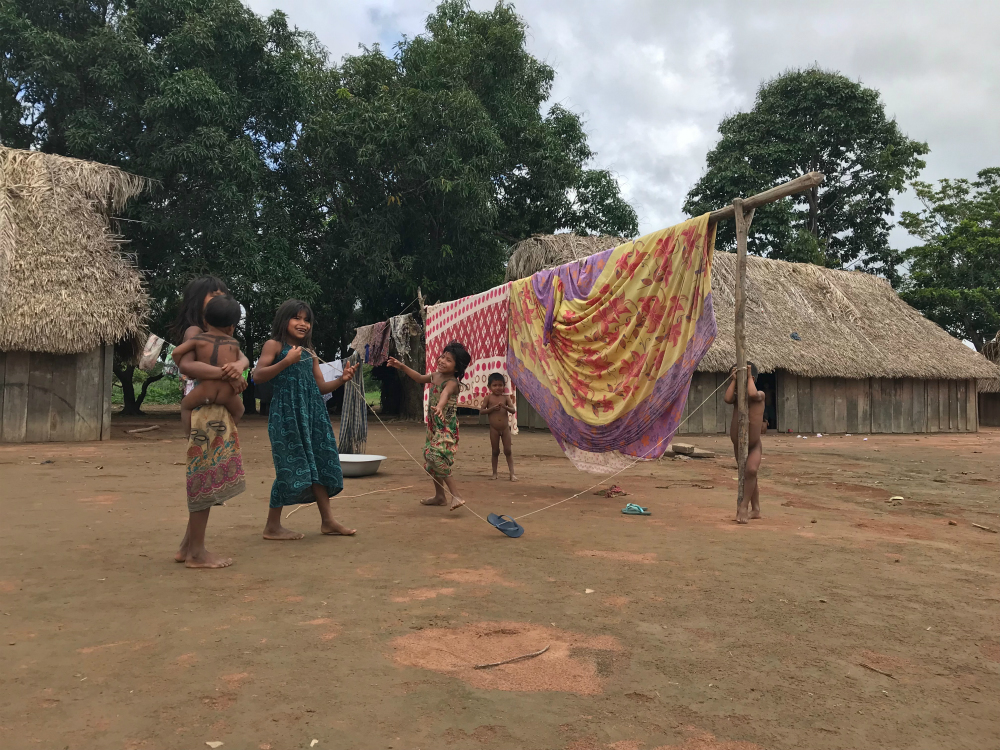 When it comes to jumping rope, the Panará children never seem to lack dexterity or energy, even while holding babies (Maria Fernanda Ribeiro/Believe.Earth) 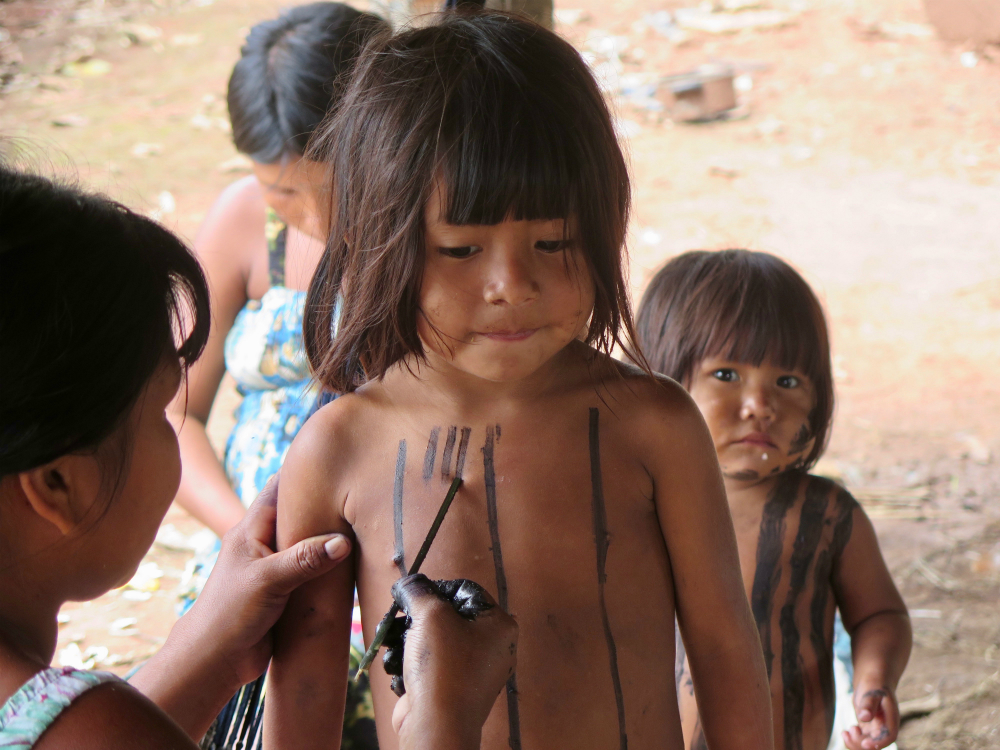 Time for traditional body paint, with dye made from the genipap fruit (Maria Fernanda Ribeiro/Believe.Earth)

After being nearly decimated (going from 400 to 70 members) by diseases like flu and diarrhea (read more here), the Panará were taken to the Xingu Indigenous Park, created by the Villas-Bôas brothers. At first, the Panará seemed healthy in the Xingu park. But their story shows that health means more than just the absence of disease.

Public health expert and physician Douglas Rodrigues, coordinator of the Xingu Project, has studied the health conditions of the Panará and other indigenous peoples for more than four decades. Interviewed at the Xingu project’s headquarters in São Paulo, an office filled with indigenous art and photos from all over Brazil, he explains, “As soon as they arrived at Xingu, I would talk to them and always hear the same thing: ‘This place is no good, there are no Brazil nuts here…’ I never really understood it, but was afraid they would get malaria and tuberculosis again.” The doctor continues, “The moment I stepped in Nãsepotiti, I understood everything. To them, there is no health without territory. It’s not a question of curing disease – it’s about well-being, which includes family, relationships, rituals, land.” In order to prove that they were right to return, the Panará wouldn’t stop bringing Dr. Rodrigues food. “One person would arrive and say: ‘Did you ever eat sweet potatoes in the Xingu? They don’t have then there!’ Then another would show up with açaí.”

PANARÁ WELL-BEING
In their ancestral land, the Panará lived in a vast area. In the Xingu, they were not allowed to go beyond the park’s borders, nor could they harvest the fruits and nuts they were accustomed to eating. Nor could they fish and hunt in the ways they had learned. “The Panará did not know how to fish with lines and hooks, and had no knowledge of how to build and keep canoes,” wrote Dr. Rodrigues in his doctoral thesis, “Health and disease among the Panará, recently contacted Indigenous People of the Amazon, 1975-2007.”

Far from the forest of their ancestors, the Panará also lost their natural medicines. Furthermore, they spent years without a pajé, or shaman. Some of their elders had died, while others had been ostracized, after some blamed them for the “curses” that had almost wiped out the Panará. “Being without a pajé can be bad [for the indigenous] because it leaves them at the mercy of the white man’s medicine, which often is not ideal for them,” says Dr. Rodrigues. “In the Xingu, the Panará had to turn to the pajés from another indigenous group – another scenario that is far from ideal.” 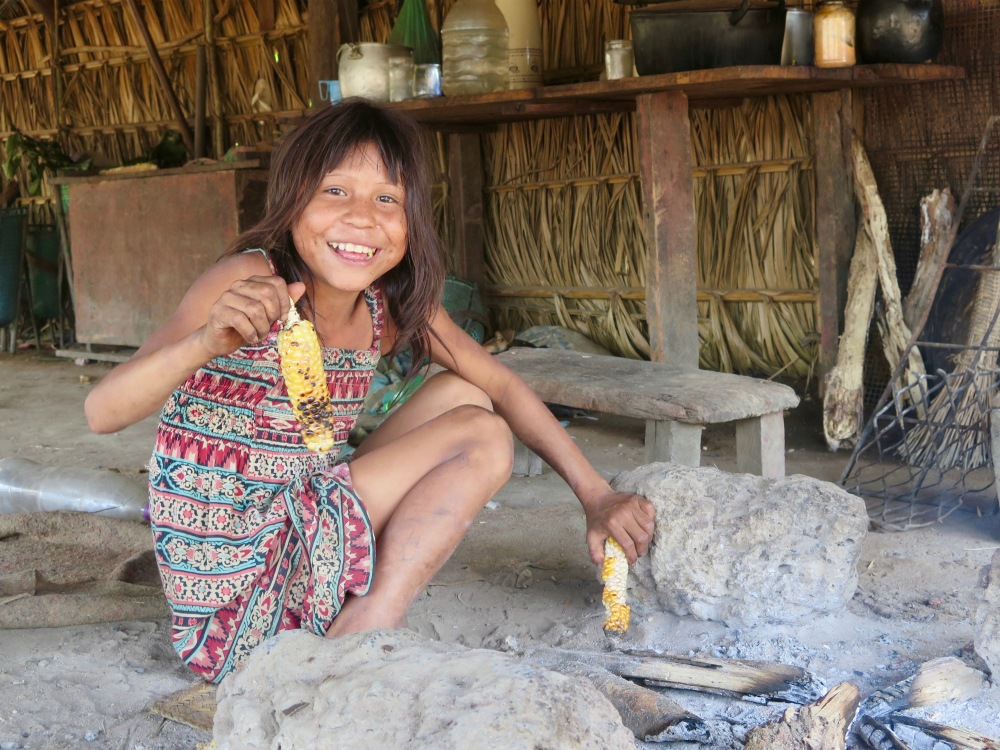 A girl roasts corn over a fire in her family’s kitchen, located right outside the house, as is the custom in Panará villages (Maria Fernanda Ribeiro/Believe.Earth) 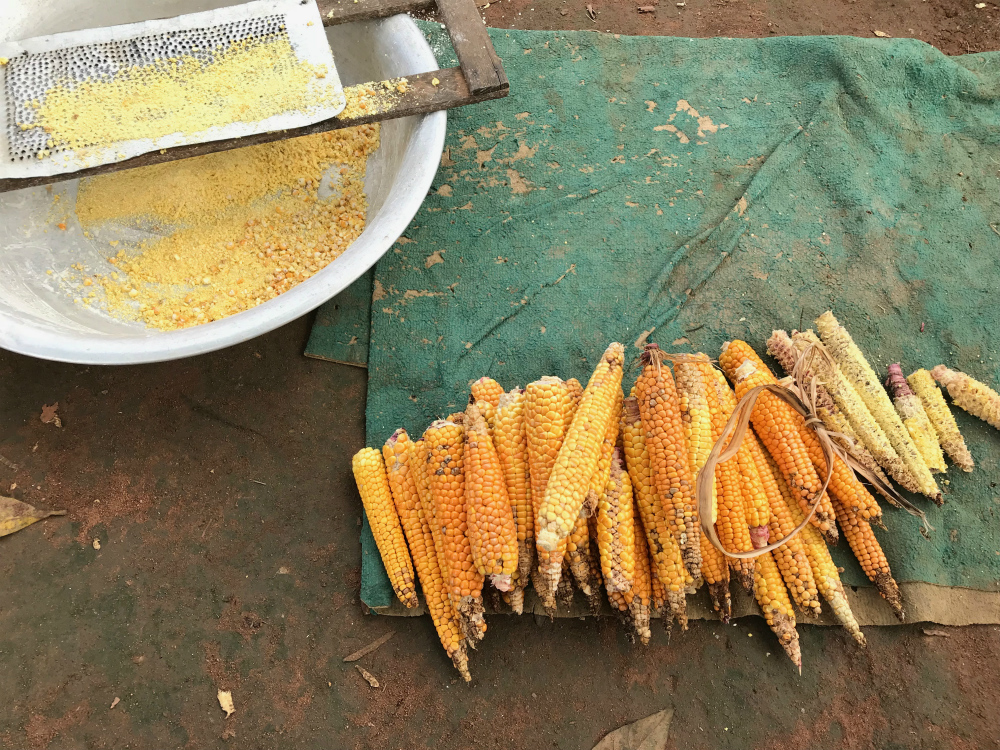 Corn, sweet potatoes, peanuts, pumpkins: the abundance of their farms is a source of pride for the Panará families (Mariana Della Barba/Believe.Earth) 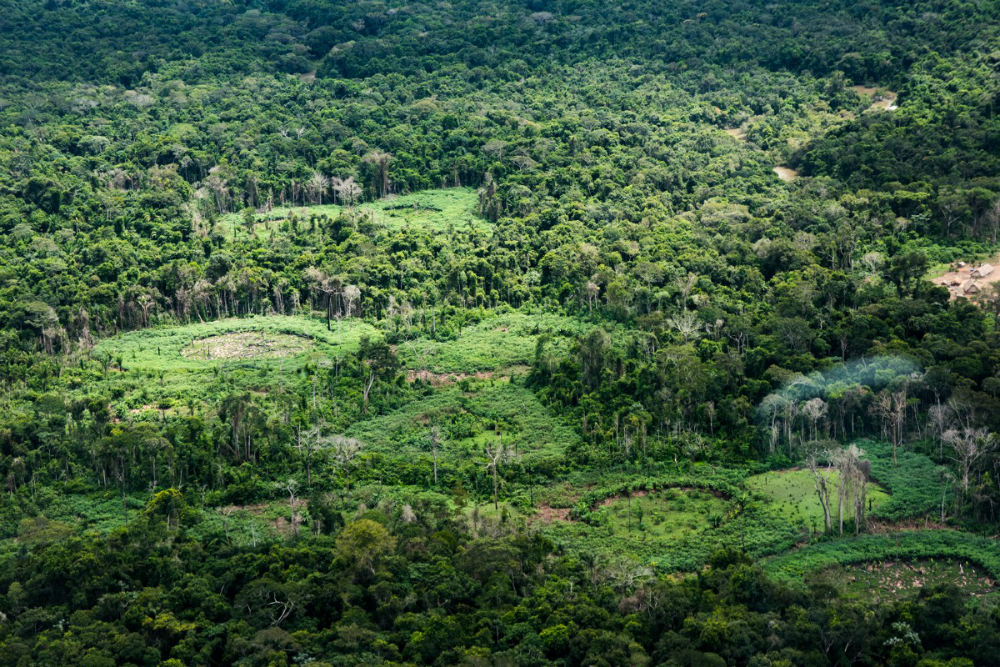 Among the Panará, each family is responsible for its own garden, normally planted in a circular layout (André Villas-Bôas/ISA)

ANCESTRAL KNOWLEDGE
The Panará’s return to their land revived their autonomy and rescued their traditions. The elders emphasize that their health comes from having fruitful land for planting, rivers rich in fish and forests with good game. And they also give credit to the land for their own fertility. Two decades after returning to their land, the community that once consisted of 178 people now numbers over 600. The growth is impressive, especially considering that the infant mortality rate for indigenous groups is more than double that of non-indigenous peoples, according to the Brazilian Institute of Geography and Statistics (IBGE). And according to the Catholic Missionary Indigenous Council (Conselho Missionário Indigenista – Cimi), the infant mortality rate for indigenous groups in Brazil increased more than 20 percent from 2015 to 2016.

Nãsepotiti has a dispensary with medication, and a doctor and nurse (or nursing technician), who can call for an airlift in case of emergency. But the Panará’s health and well-being depend on other factors. As she nurses a newborn girl and tries to get the attention of her son, who is making faces at our camera, Tutiti, a young mother, reveals one of the secrets behind her people’s fertility rate: special nutrition for pregnant women. “Both times I was pregnant,” she explains, “I ate lots of small fish, the ones that don’t smell as strong and don’t give you nausea.” Kreenpy, the midwife, says pregnant women must eat lots of honey and native fruits. “At Xingu we didn’t have much of this. But here, since the land is good, our garden is very fertile.” 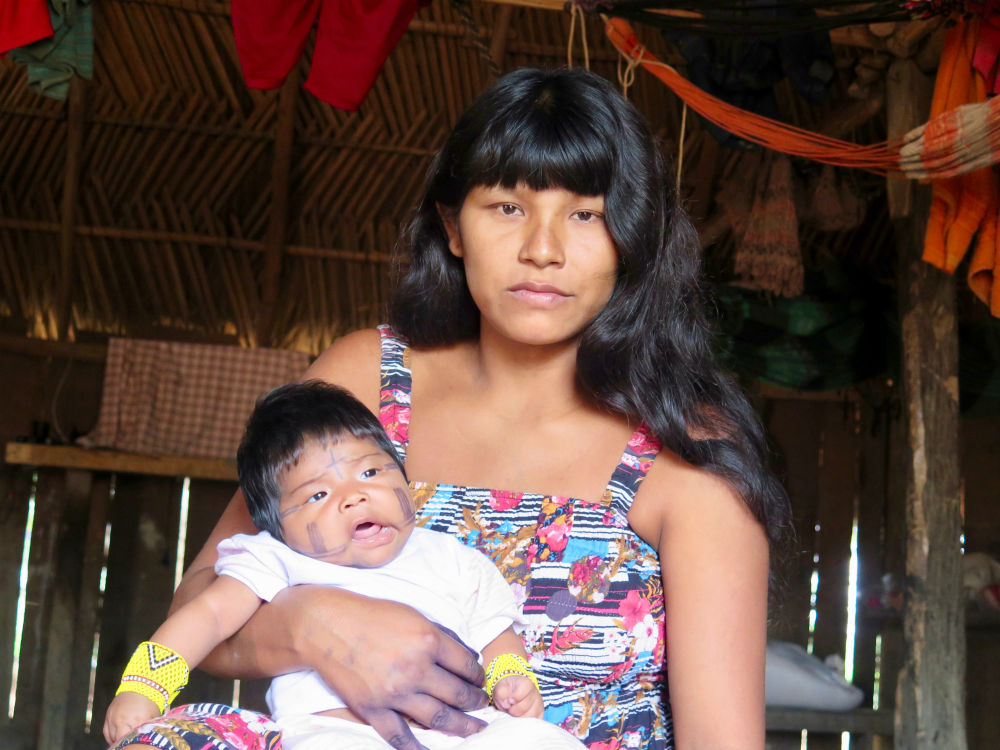 Tutiti, shown here with her daughter, Suuri, says there are fish that don’t give you nausea during pregnancy (Maria Fernanda Ribeiro/Believe.Earth) 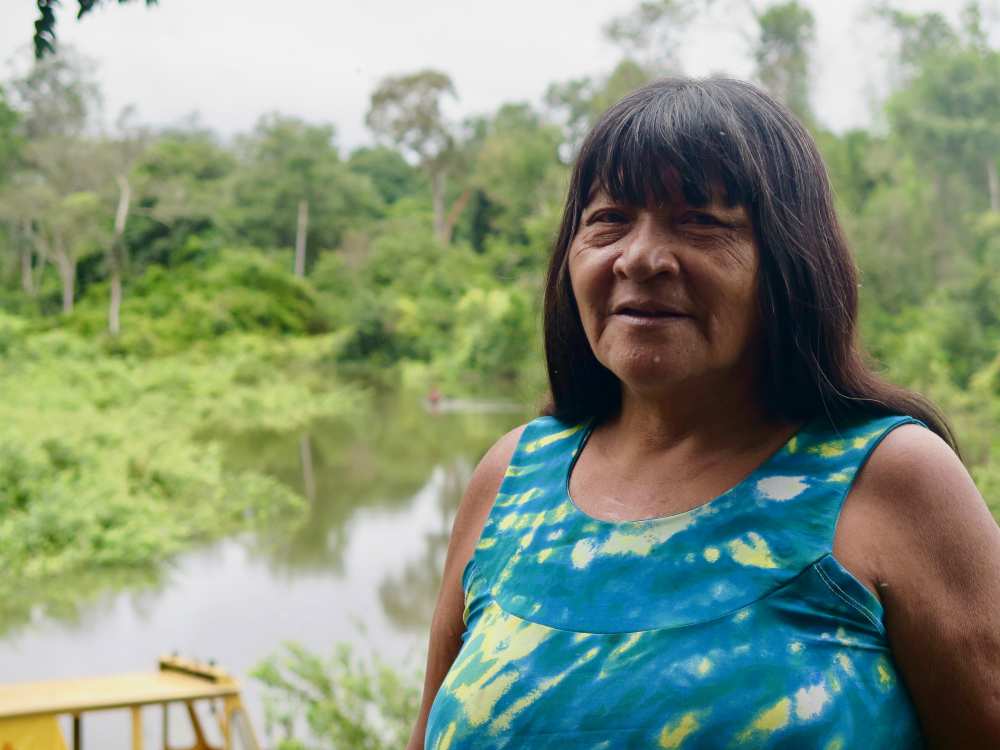 The midwife, Kreenpy: “At Xingu, we didn’t have the foods the Panará need to eat during pregnancy” (Maria Fernanda Ribeiro/Believe.Earth) 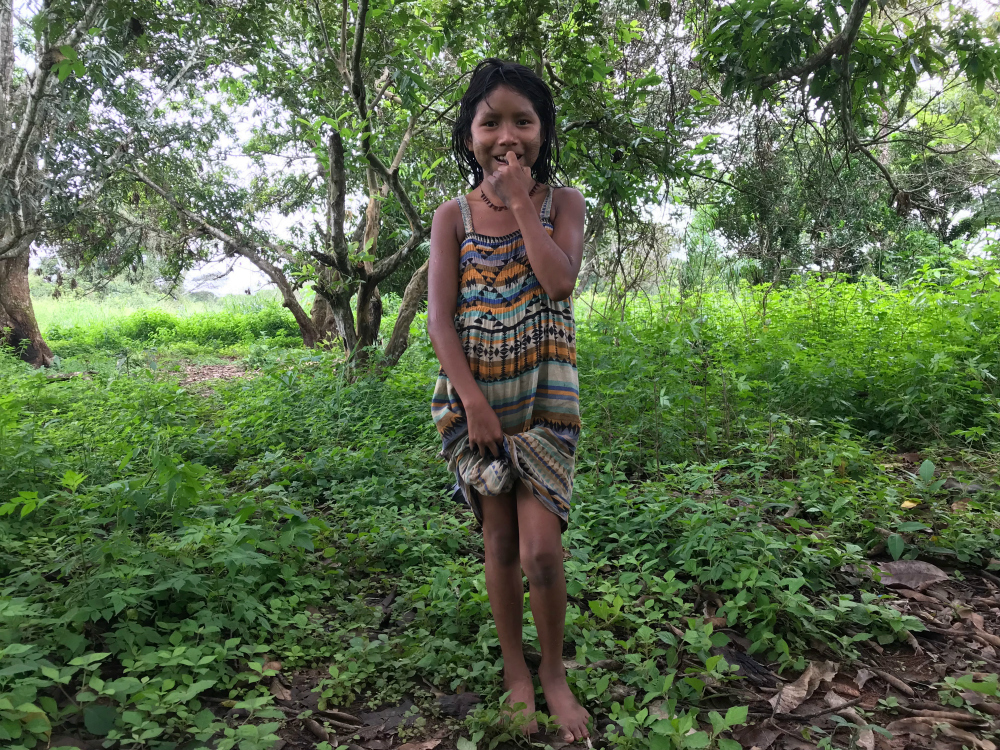 The Panará children are shy at first, but they soon smile and feel confident in front of visitors (Mariana Della Barba/Believe.Earth)

Dr. Rodrigues says it is important to respect and preserve indigenous knowledge. “When I go there, I listen to them talk about how their hunt went, how their fishing went, what their garden is like,” he explains. “I am careful not to dismiss traditional care. Depression, for example, tends to be very well treated in indigenous medicine, while our medicine uses psychotropic drugs that don’t always work as intended.”

To him, it’s important that the health professionals who work with the Panará – and other indigenous peoples – keep their interventions to a minimum. “One step too far and you create a dependency,” he warns, “and this takes away their autonomy.” And to the Panará, their autonomy is worth more than drugs.

All rights to this content reserved for Believe.Earth and El País.
Article partially funded through a grant from the International Center for Journalists (ICFJ).
This content is promoted in partnership with Instituto Socioambiental (ISA) and Greenpeace.