Flávia Pinto: Mother of the dialogue 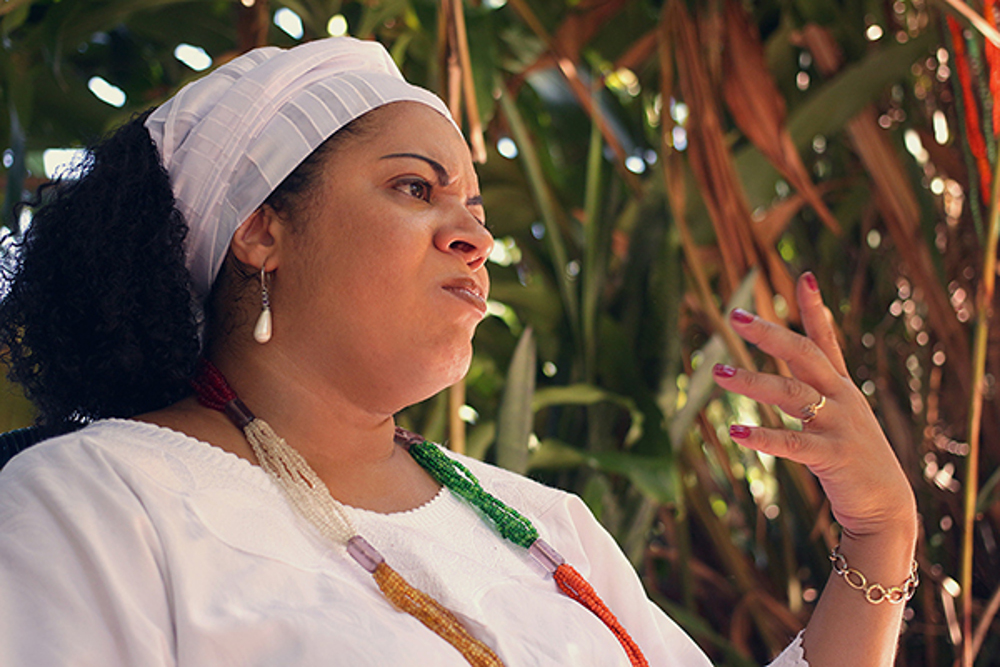 Flávia da Silva Pinto, best known as Mãe Flávia Pinto: The prejudice against religions of African origin is linked to the history and formation of Brazil (Mãe Flávia Pinto/Personal Archive)

Mãe Flávia da Silva Pinto, 39, is a spiritual leader of Umbanda (an old Afro-Brazilian religion), a sociologist, a writer, and an activist in the human rights and black movements. (The word “Mãe” means “mother”; it is also the honorific used in the Umbanda tradition for a female religious leader.) She was born in Vila Vintém, a favela, or poor community, in Rio de Janeiro. Mother of three children and leader of countless followers who practice Umbanda, Mãe Flávia Pinto also works for the development of public policies against religious intolerance. She is currently the coordinator of Human Rights and Religious Freedom Policies of the City Department of Social Assistance and Human Rights.

In 2011, Mãe Flávia Pinto received the National Human Rights Award from Brazil’s then-President Dilma Rousseff for her role in legalizing the terreiros (Afro-Brazilian religion meeting places), the research she developed to map the houses of religions of African origins in Rio de Janeiro and the social work carried out in terreiro de Umbanda Casa do Perdão (House of Forgiveness), an Afro-Brazilian religious meeting place, which she founded in 1997. Casa do Perdão provides religious assistance to the inmates of the Nelson Hungria prison’s women’s unit.

In an interview with Believe.Earth, Mãe Flávia Pinto says that violence against African-influenced religions is the result of historical prejudice and tells why she believes that humanity has much to learn from traditional knowledge and practices that emphasize a strong connection with nature. Believe.Earth (BE) –How did your relationship with Umbanda begin?

Mãe Flávia Pinto (MFP) – My family’s beliefs are typical of the Brazilian family. I was raised in the Catholic Church, but whenever I was ill, my paternal great-grandmother would take me to the terreiro for Preta Velha (Old Black Woman) [an Umbanda spirit representing maternal care and concern] to bless me, and I would get better. My father and mother were murdered [her father was a drug dealer and her mother was the victim of femicide]. I was 5 when he died and 10 when she passed away. I wanted guidance to deal with all this, and neither my family nor the Catholic Church would provide it to me. As a child, I asked to go to the terreiro alone, and the spirits gave me the guidance that I needed. They always told me that I had a “coroa de babá” [a term meaning that a woman is destined for spiritual leadership, a position she assumed at Umbanda at the age of 23]. I always knew that I could be a medium, that I needed to develop this gift to care for humanity. But the teenage years came, and I did not want to think about religion, just about dating. I also walked away from the religious beliefs because, as in every other religion, there are pedophile priests and charlatan pastors. I saw many bad things and then I had a biased view. I was far away from Umbanda, and for seven years I did not want to hear about it. Then, I came back through the spirits that began to get in touch [with me]. Suddenly, the terreiro Casa do Perdão was born, and, it’s now been around for 20 years.

BE – Did the social activism arise with your involvement in the terreiro?
MFP – When I became a spiritual leader of Umbanda, I noticed the [religious] intolerance and it scared me. Then, I started to look for ways to face this situation and I started getting militant about human rights.

BE – Where does prejudice toward African-influenced religions come from?
MFP – It has been a historical process. Brazil is not 517 years old, but 11,000 years old, according to the most recent archaeological reports proving the existence of indigenous people here. When we believe that Brazil is 517 years old, we kill a culture, a knowledge that existed before that period. Brazil has chosen this Euro-Christian way of thinking, which generates a series of prejudices, such as those against the indigenous people and the Afro-indigenous Brazilian religions, that are Umbanda and Candomblé. It is understood in Christian-influenced culture that only from the year zero, with the coming of Christ, did things begin to be important. That’s why it is natural from some people to call us devils, archaic spirits, when, in fact, the devil is a Christian figure, not African, Yoruba or Indian. From left to right: Sheik Mahdi, a Shiite Muslim; Irã, Sunni Muslim, Mãe Flávia Pinto, from Umbanda; Raga Bhumi, Hare Krishna devotee; and Alice Gress, a practitioner of Shamanism, during the Faith in the Climate event, a meeting of the religious community on climate change that took place earlier this year in Rio de Janeiro (Mãe Flávia Pinto/Personal Archive)

BE – What answers do you find in human rights and individual freedom struggles? What helps you to fight religious persecution?
MFP – We cannot stop fighting. It is the courage of Maria da Penha [a woman whose husband tried to kill her twice, who has become a prominent activist in Brazil’s fight against domestic violence; a national law against domestic violence is named for her] and many others organizing movements to implement better public policy. Such activism gets the government to understand that there is a real need from the people. I am really optimistic about it, because I understand that we are playing this role. We have the Caminhada a Intolerância Religiosa – GTIREL (Walk Against Religious Intolerance), an interfaith working group that will become the country’s first State Council for Religious Freedom. There is also a state plan for religious freedom. There are already public measures guiding how governments should respond to complaints about intolerance. These are breakthroughs as we started from zero.

BE – Casa do Perdão does a lot of social justice work, much of it aimed at women. What is this connection between the religion and female empowerment?
MFP – Our religion is linked to nature. For us, nature is not just water and trees, it is made up of sacred forces. Whether through the religious tradition or the work of social service, we help women begin to recover a relationship with their native and African origins. After all, most poor people in Brazil are descendants of Indians and Africans. Women who have had their childhoods stolen, who have suffered violations of their rights, come to recognize themselves as subjects. They resume their relationship with nature and, from our apprenticeships and a vocational course, they become more empowered, because they become protagonists in their own life stories. They cease to be dependent on anyone or held hostage to situations of violence. Women also relearn that some tea can help improve their health. If you take into account that we are talking about a population in which the majority is poor, knowing that you can find medicine in nature at no cost is empowering.

BE – Do all these women practice Umbanda?
MFP – No. The terreiro is open to people of any religion. Our vocational training is open to all. The largest group that attends is the evangelical believers. We did a project financed by Petrobras in which we taught sewing, carpentry and computer science. We reached about 600 families. Everything for free.

BE – Why are African and indigenous religions important for the preservation of nature?
MFP – The idea that human beings must develop a close relationship with the nature is fundamental to us. I think it is important that religions such as Umbanda, Candomblé, and Wicca, which have such a strong bond with nature, are educating more people about their beliefs. We can transform the world by spreading knowledge of our religion. Do you have to embrace these beliefs? No. Just do not sit idly by.