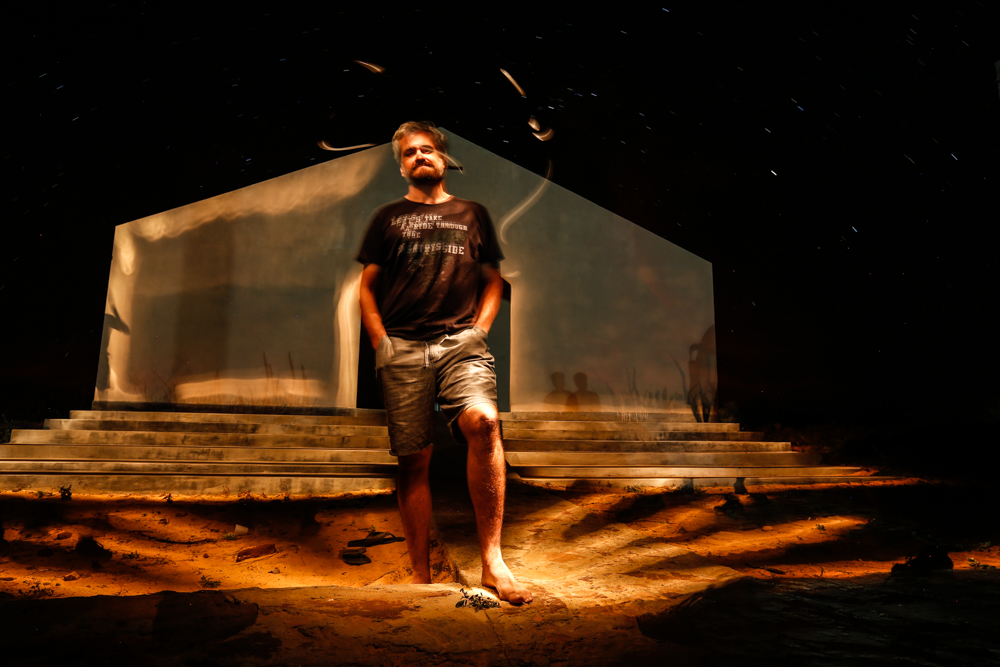 Guido Cavalcanti, a teacher, created the NGO Salve Sertão, which allows students to put into practice the theory they learn in the classroom (Rafael Martins/Believe.Earth)

A woman holds in her arms a child who has not eaten for three days. Desperate and hungry, she is determined to kill herself by being hit by a car crossing the Caatinga (a desert region of Brazil). The driver is Guido Cavalcanti, a teacher with a law degree. Not so long ago, Cavalcanti was only thinking of amassing as many assets and promotions in the shortest possible time.

The mother in the road does not know, but a few months before their encounter, the teacher’s worldview had changed dramatically, when he met an elderly man in extreme need on the streets of Recife, the capital of Pernambuco. Looking through the eyes of the suffering man, Cavalcanti began to question the value of a life based on acquiring possessions and status.

The day after meeting the old man in Recife, Cavalcanti gave his students the opportunity of a lifetime. He included, as part of the study of civil law at Estácio College, the creation of an NGO, Salve Sertão (Save the arid region). Linking theory to practice, it leads students to experience and meet the needs of the vulnerable people of the arid areas of Pernambuco. Students from each subject area offer service befitting their specialty, for instance, law students assist residents in legal affairs, while those who study advertising guide cooperative ventures on how to sell more.

The first initiative of Salve Sertão was a party that raised money for residents of Sertânia, a city located 300 kilometers far from Recife. The logistics were simple: Cavalcanti gathered the donations and began searching for people in need in the Caatinga, when he saw the mother with the child on her lap.

Salve Sertão has undertaken more than 40 trips in almost six years, with the participation of 30 to 45 volunteers each time. Each year, the NGO organizes five major trips, in which students live among impoverished communities. “This experience caught me by surprise,” says the 23-year-old university student Everton Xavier, who has now worked with the NGO for four years and traveled with the group to the city of Custódia in Pernambuco. “I’ve noticed how we care about small issues.”

In addition to the desert, Salve Sertão also carries out initiatives in the metropolitan area of Recife, delivering donations collected from university centers of the city. The project is currently  part of Porto Social (Social Harbor), a network of social enterprises incubated by Porto Seguro, a Brazilian insurance company, and therefore attracts not only students, but other volunteers who find the organization through the Internet. 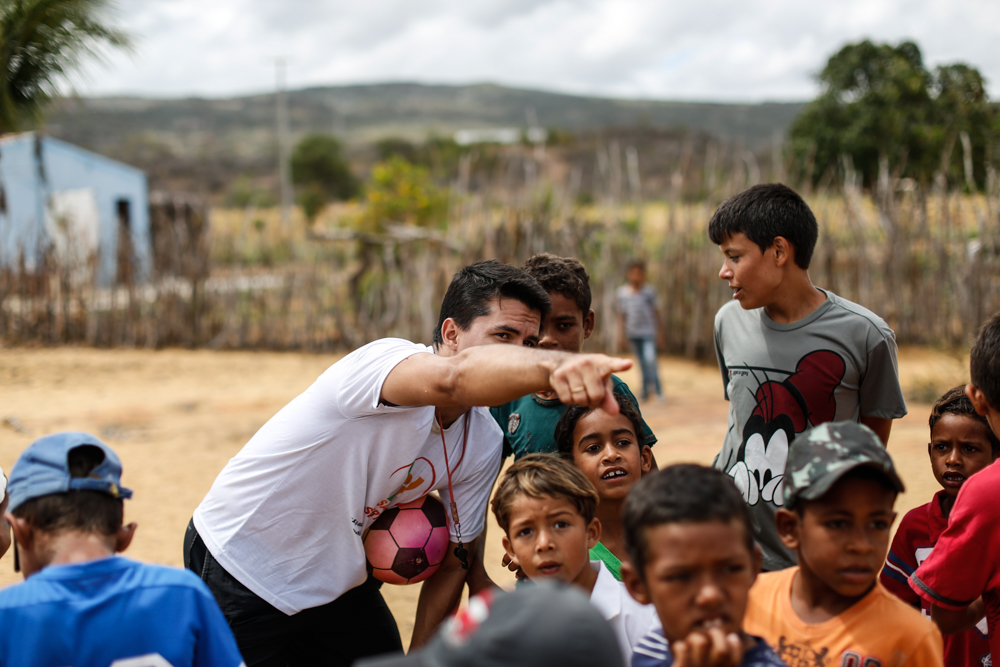 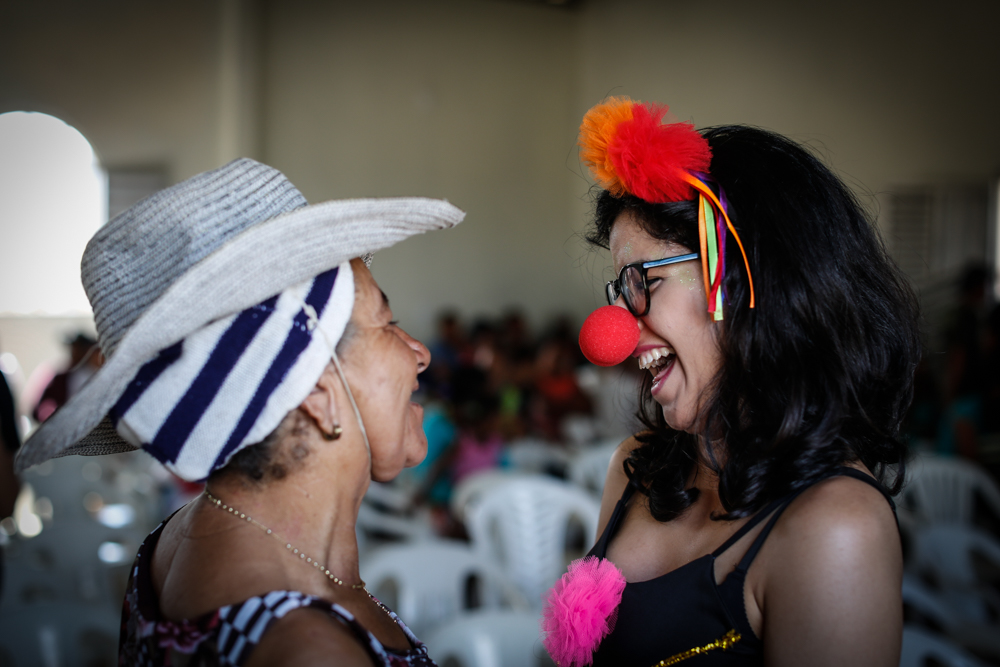 Salve Sertão volunteers learn from residents of the communities they visit (Rafael Martins/Believe.Earth) 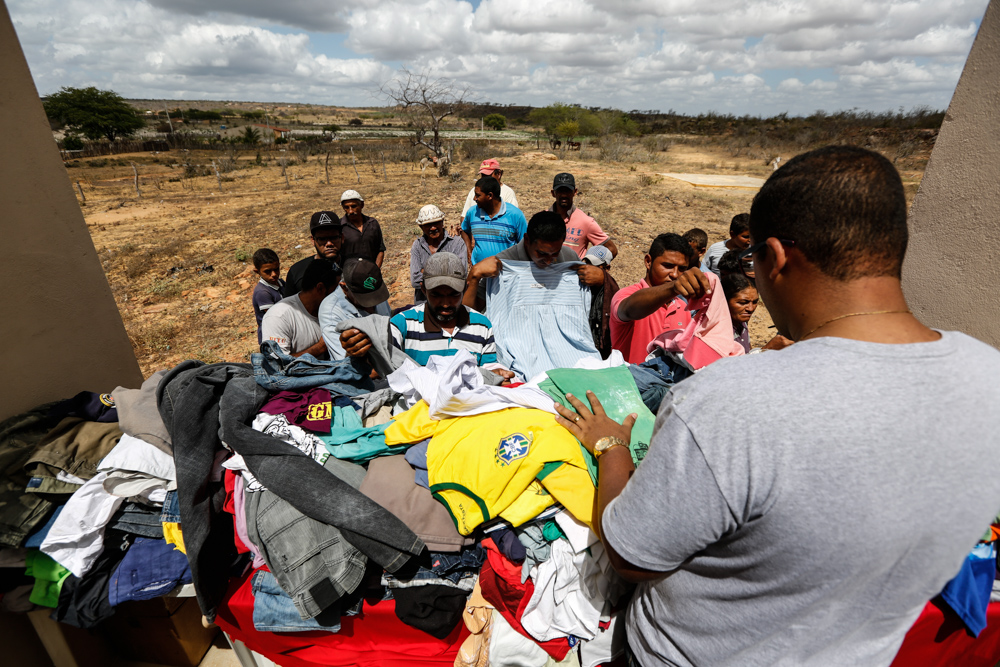 A donation distribution system stimulates the autonomy of the communities, allowing recipients to choose items(Rafael Martins/Believe.Earth)

THE RECONNECTION WITH THE PLANET
Three years ago, Cavalcanti went through life changes that resulted in Salve Sertão. He bought a ranch in the city of Jaboatão dos Guararapes and began to study land management. At first he attempted traditional agriculture. “I tried plowing, fertilizer, irrigation, but nature did not answer,” he says. Then he grew interested in permaculture, which is an eco-sustainable system. “I began to observe the interaction of plants and the climate and find ways to respect the natural functioning of that environment,” he says. “Nature answered me, and the soil became fertile.”

Today, the teacher balances the rush of the big city with the silence of the Piutá ranch. He also brings his farming experience to Salve Sertão, which has started to work on environmental education. On each trip, Cavalcanti and the students teach communities techniques for preserving the soil and improving the cultivation of food. They also learn by listening to the experiences of the locals. In addition, Salve Sertão  invites residents of the interior and students to participate together in a four-day hands-on workshop at the ranch. About 120 people have gone through this experience. José Cícero do Nascimento, a farmer in a rural area of Manari: “We need to look after the land, so the land will look after us” (Rafael Martins/Believe.Earth)

José Cícero do Nascimento, 48, is a farmer in the state of Pernambuco. He knows the importance of treating the land well. His body bears the marks of a lifetime of difficult work. He wakes up every day at 5:00 in the morning and works until 6:00 pm. “We are the natural sons of the land,” explains the farmer, who lives in Sítio Baixas, a rural area of the city of Manari. “We need to look after the land, so the land will look after us.”

Manari spent years with the lowest rating on the Índice de Desenvolvimento Humano Municipal do Brasil (IDHM) (Municipal Human Development Index of Brazil) of any municipality in the state, due to its intense drought, high child mortality rate and low life expectancy. Even today, Manari has concentrations of misery. The region is eight hours from Recife, where the volunteers from Salve Sertão departed from on October 21, bringing with them plenty of donations, as well as the desire to help a population forgotten by the government.

THE MEETING
Cavalcanti and the volunteers arrived in Sítio Baixas in the afternoon and met Ronaldo and Joana Henzel. The couple are the founders of the NGO Pão é Vida (Bread is Life). He is from Rio Grande do Sul and she is from Rio Grande do Norte. They fell in love in São Paulo and decided to travel through Brazil by motorhome. When they arrived in Manari and saw children sleeping on the ground and adults travelling miles to find a single source of dirty water, they decided to stay. “We saw a lot of malnutrition and infant mortality,” says Ronaldo Henzel. “We realized that we could only try to change it if we stayed there.”

There are 500 people from 80 different families in Sítio Baixas. The Henzels mobilize volunteers to provide medical and dental services. In their seven years living in the community, the couple has helped drill six artesian wells and plant nine orchards in the cracked soil. Now, they want to end hunger there, in part through the distribution of olive moringa (a plant famous for its nutrients) seedlings. Their goal is to see the creation of an orchard in each resident’s yard. 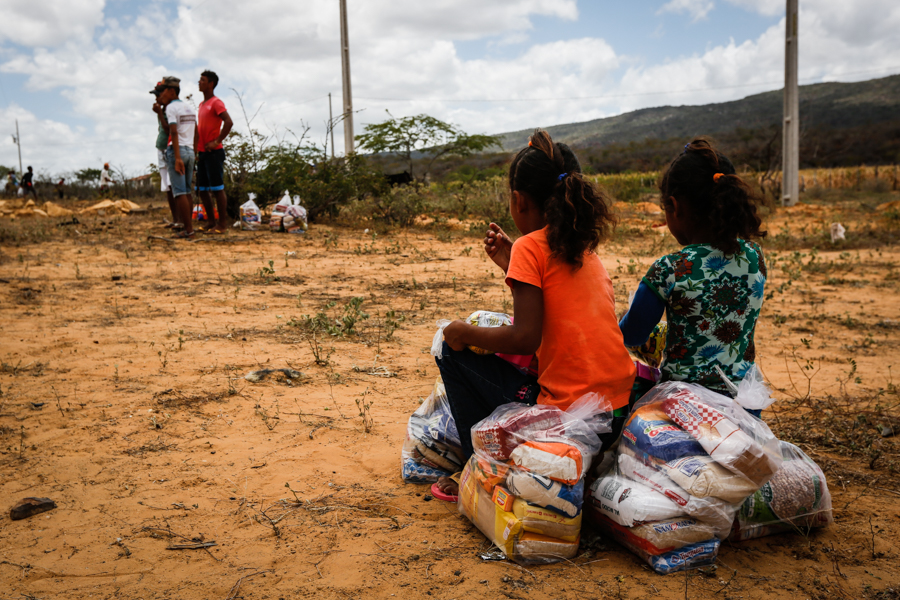 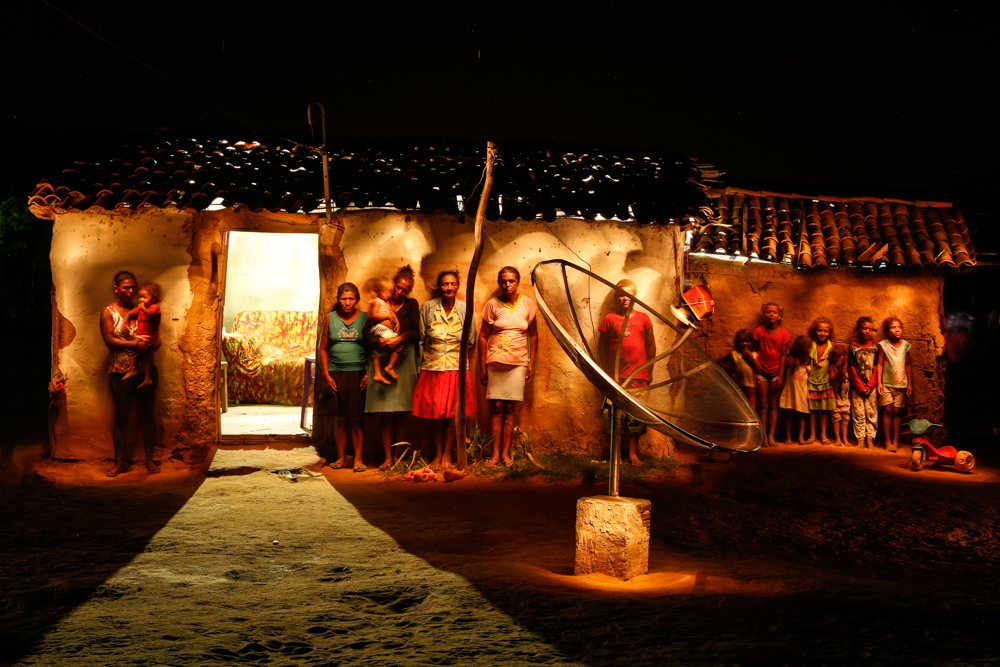 Rosicleide Silva’s is one of the 80 families who live in poverty in Manari’s rural area (Rafael Martins/Believe.Earth) 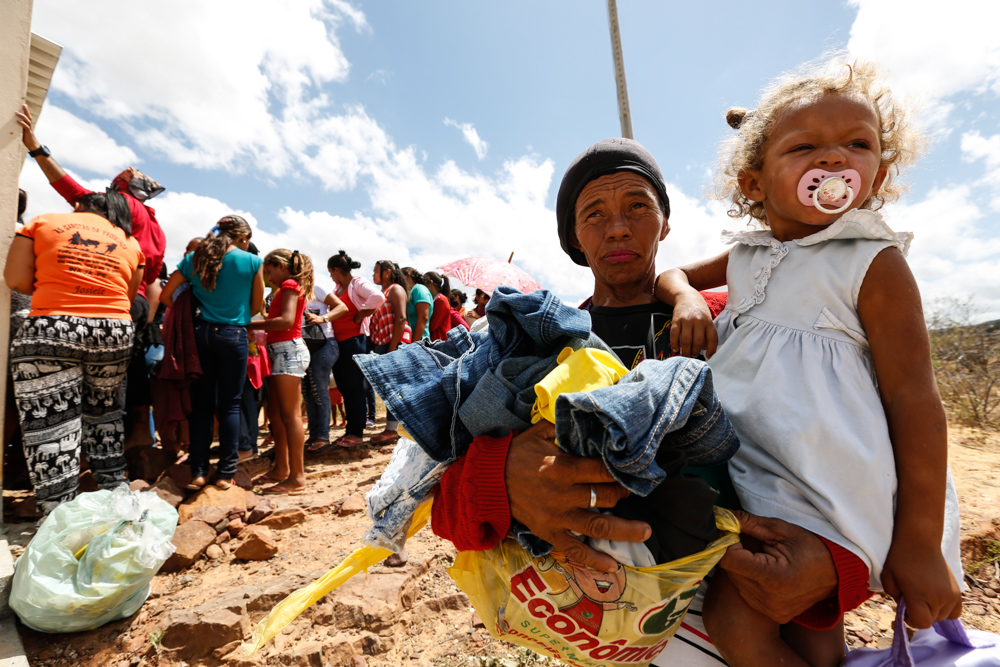 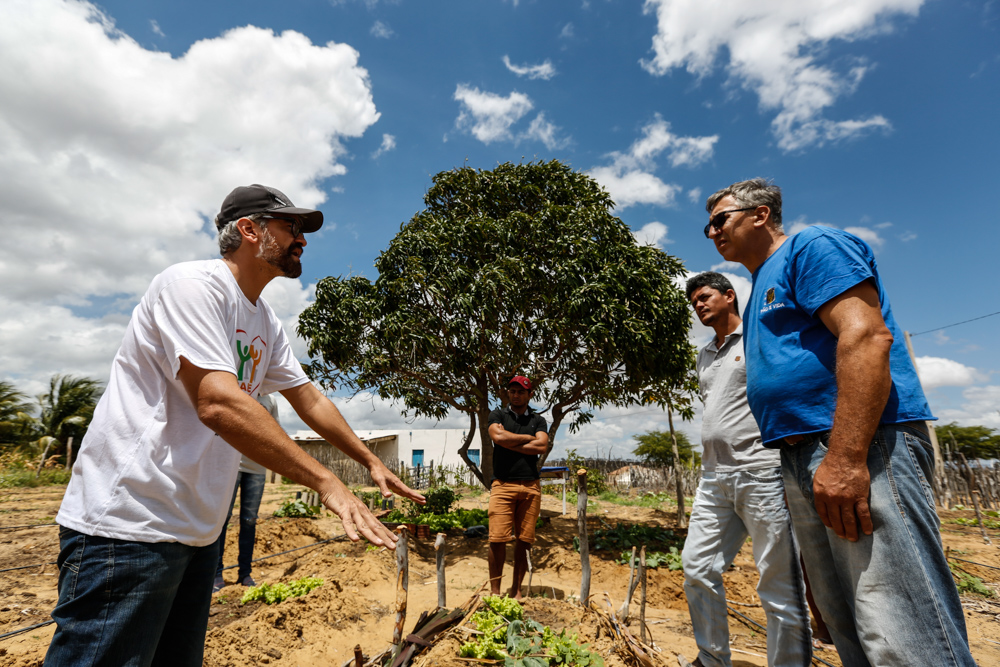 In Manari, farmers were taught techniques to cultivate the cracked soil in their arid region (Rafael Martins/Believe.Earth)

Salve Sertão set up camp at Sítio Baixas’ ecumenical center. The next day, some of the young people woke up very early and got busy organizing the clothes for donation. A queue was formed, and each resident could choose five items. “Life here is always very difficult,” says the 30-year-old housewife Rosicleide Silva. “There is neither work nor opportunity. When these people come, they help us keep our lives moving.”

Salve Sertão began some recreational activities with the children and young people, too. “We realize that people need more than donations,” says physical education teacher Nivaldo Brasil, 27, a volunteer who got involved with the initiative online two years ago. “There is a desire to receive affection and attention as well.”

In Manari in October, Salve Sertão delivered more than 300 market baskets and 300 toys. But a lot more was shared. “Lots of people do not see themselves as human beings,” muses Rafaella Feitosa, a 23-year-old law student. “We send the message that we are all the same. Here, I feel that we’re able to make a fairer world.” It’s what Guido Cavalcanti calls the “revolution of affection.”