Hans Dieter Temp: A dream of growing food for everyone 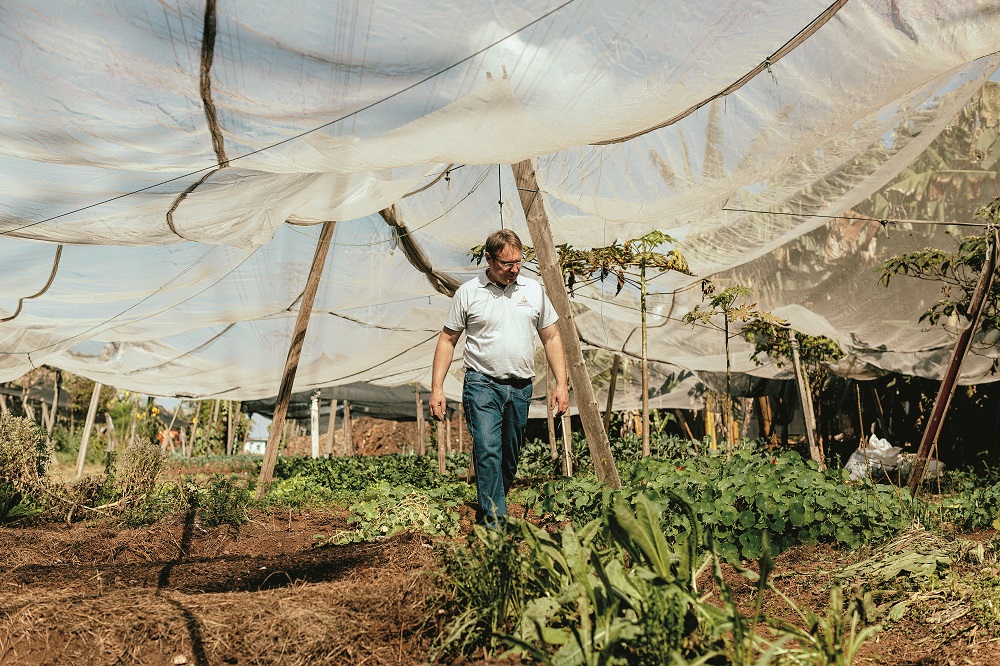 Hans Dieter Temp has met students and teachers from a school in Itaquera to create a vegetable garden for their collective use (Photo: Trip Transformadores)

There’s a silent revolution going on at the Escola Estadual Professora Maria da Conceição Oliveira Costa (Professora Maria da Conceição Oliveira Costa State School), in Itaquera, on the east side of São Paulo. At the school, students and teachers have given life to a community vegetable garden in which they grow some of the food served in the cafeteria, and bring home the excess produce. The garden is the brainchild of Hans Dieter Temp, 51, from Rio Grande do Sul, whose dream is ending hunger in Brazil in the simplest, greenest fashion possible: with sustainable agriculture projects for urban and rural areas.

In Itaquera, change began with the school principal, Eliane Ribeiro da Silva, and the angst she felt looking out of her office window and seeing a gray, abandoned lot. The image disturbed her daily, until she heard of the work done by Temp and his NGO, Cidades sem Fome (Cities Without Hunger). Three years ago, da Silva invited Temp for a talk and an idea was born: using the school’s abandoned spaces to create vegetable gardens that would serve fresh, organic produce for the 700 students, and also support their learning. Temp saw in that space the possibility of creating a pilot project for new public policy, got his hands dirty and began work on the plants. “The garden connects the school and the surrounding community,” he says. “The child brings some food back home, the parents are happy and become interested in learning more about our work, engaging with collective labor projects and sharing their concerns about the school and their ideas to improve it, offering a hand in painting the space… It’s an exchange, the essence of living in a community.”

Immediately, parents began describing the miracles that were happening at home on a daily basis. “My daughter would never touch any vegetables, but now she loves them,” says da Silva. Temp was confident of this outcome because, from experience, he knew children change their relationship with food when they are more aware of where it comes from. “Children come to realize that earth is life, that the sun is essential. They begin valuing nature and that’s a feeling that will only grow over the course of their lives,” he says. “Some children here are already dreaming of becoming chefs,” adds da Silva.

Raised in a farm on the countryside of Rio Grande do Sul, Temp grew up  messing with the soil and surrounded by green areas. When he moved to Suzano, in the suburbs of São Paulo, he would walk the streets and notice the great number of vacant lots, thinking: “Why not turn them into communal vegetable gardens? Why not turn the garbage and debris into a space that can provide the neighborhood with food?” And that’s what he set out to do, one lot at a time.

“Naturally, at first the owner of the land was skeptical, as he or she was unsure if my intentions were honest. But, after the first vegetable gardens were ready, everyone saw that the project worked, and things got easier,” he says.

After founding the NGO, in 2003, Temp started using lots owned by local and state governments. “Cities don’t have to be exclusively for industries and services. It’s perfectly possible to make room for other segments, other sources of income and, thus, a new society,” he says. Genival and Sebastiana are the owners of a vegetable garden created with Temp’s help in São Mateus, a neighborhood on the east side of São Paulo. Both hail from Pernambuco and are in their sixties. The lot is located below a power line and, legally, there are many limitations to its use. Cidades sem Fome has proposed a deal with the local government, allowing the use of that space for one of its gardens. “Our methods are 100 percent organic,” says Genival. “Our neighbors buy the produce and compliment us on how everything looks, and I must agree with them. And I’m the creator of such beauty,” he adds, pointing to the 160 plots he has gardened. Above, Genival and Sebastiana, owners of a garden created with the NGO’’ help ( Photo: Trip Transformadores)

In all, Temp’s organization has created 25 communal vegetable gardens in 30,000 square meters, and he knows that he’s only just getting started, as there is no scarcity of ideas and desire for this project – only a severe shortage of investment. Even so, Temp says his dreams extend beyond this city: he wants to change Brazil and the wider world. “I lived in Germany for 4 years, working on my specialization in agriculture, and I know that each place has its problems. But I also know that our country has the perfect climate, plenty of land, water, and all the great people. Why do we still have poor neighborhoods in our cities is simply beyond me,” he says. “How much does a simple vegetable garden cost, providing food for a whole community? The price tag is less than a bottle of wine served in São Paulo’s best restaurants.”

And that might be the fundamental difference between celebrities and heroes: faced with indignant injustice, the hero will overcome any excuses, getting his or her hands dirty in working for the whole community, and dreaming of a day when the world will be changed forever.