The Xingu Seed Network has generated income for 450 seed collectors. Soon it will get a major boost from Rock in Rio 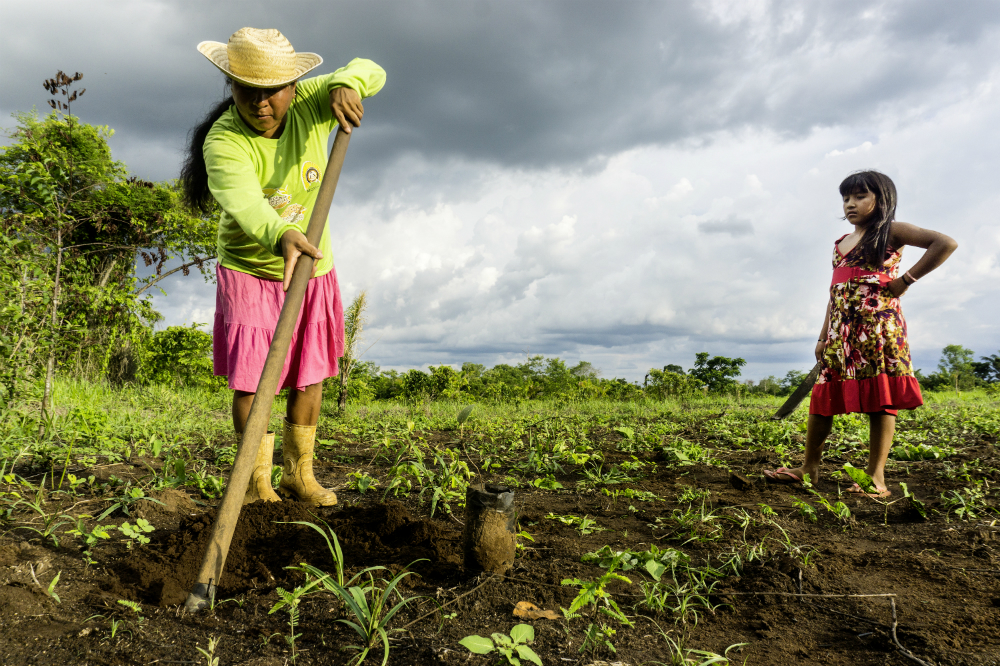 “I wanted to go to college to study to be a veterinarian, then go to the big city and make money,” said Milene Alves, 19, a biology student in Nova Xavantina, in the state of Mato Grosso, Brazil.

“But, being part of this project made me understand that my wealth is right here, in my backyard, in the midst of my cashew, Baru and cecropia trees.”

Alves is part of Rede de Sementes do Xingu, the Xingu Seed Network, named for the Xingu River in Central Brazil. The Network hires indigenous people and local farmers to collect seeds from the forests in the river basin. It then sells the seeds online to supply reforestation projects around the region.

“It all started with my mom,” said Alves. “After work, we used to collect seeds by bike.

We didn’t find many in the beginning, but we kept doing it and improved our technique. One day, my mom decided to quit her job as a maid and dedicate herself to this project. I did the same.”

Alves’s father, who’d been working as a fisherman, got on board with his wife and daughter’s idea, and the family’s income rose. Alves has been working with the Network for five years, three of those as a coordinator. During that time, she’s built a house for her family and bought a car.

Women have played a key role throughout the project, which kicked off in 2007. Part of the reason for that is local culture, said Rodrigo Junqueira, one of the founders of the Network and the coordinator of the Xingu Program at the  Instituto Socioambiental (ISA), an environmental advocacy group.

“Among indigenous people, it’s traditionally women who look after the seeds. But this is only part of the explanation”, according to Junqueira.

The other is that seed network participants can work according to their own schedules, which he said women seemed to value. In some communities, said Junqueira, the women’s’ incomes also help equalize their power relative to the men.

Yarang collectors examine some seeds. Partnerships between different groups are understood to be one of the project’s strengths (Claudio Tavares / ISA)

SAVING THE SEEDS
Working with the project has opened up other opportunities for Alves. She received a scholarship at her university to investigate why the cecropia seeds in the area weren’t sprouting. After a year of research, with her advisor’s support, she discovered that collectors were harvesting the seeds too early in the season. She presented her results to a large gathering of them.

“Bringing this knowledge to the project and sharing it with so many people touched me so much,” said Alves.

Students and teachers from other programs sought her out afterwards, interested in learning more about trees and how to plant them.

Amescla is one type of seed collected by the network, which has created a platform to sell seeds online (Claudio Tavares/ISA)

CONNECTING DIVERSE PEOPLE
One of the most important of the Network’s activities is gathering and sharing information, as each group of collectors has its own approaches. Indigenous people, for example, collect seeds from the Carvoeiro tree one at a time.

“They collect about 200 grams a day that way,” said Alves, or just under half a pound. They are looking for quality, not quantity, so this amount makes sense. A collector going for quantity, on the other hand, might use a lawnmower and collect as much as seven pounds of seeds in a day. Each method makes sense for that collector’s purpose.

“Indigenous people do not want to get rich but to reforest,” said Alves.

The project also helps to build relationships among the different groups of indigenous seed collectors.

“This mutual learning results in more efficiency and quality, and it keeps the initiative sustainable, as it respects people’s techniques,” said Junqueira.

The challenge is to link ancestral knowledge to newer alternatives that deal with the impact of climate change on seed production, he said.

The collectors have observed for some time that the plants’ behavior is changing. The flowering season of some species has changed due to climate change, according to Alves.

It’s a time to rethink old processes, and that’s one reason young people, who are thinking about the future, she said, are playing a larger role in the project.

“We see that the new generation has a great desire to change things,” said Aleves, “and, as they have always respected the elders, they are also being heard.”

Alves and her colleagues at the university have been studying the Landi tree, The tree grows in swamps, so Landi seeds have always been collected in knee-deep water. But, last year, the places where the trees grow never flooded. As consequence, the seeds aren’t germinating, their quality is low and they cannot be sold.

“In one of the meetings,” Alves reported, “an indigenous boy said: ‘Nature got nuts.’ He said that when butterflies had gone up river, it had meant that rain was coming. Now, butterflies go up the river, but, then, there’s no sign of rain.”

Her group has proposed creating a calendar to mark the forest’s annual cycles. People will be able to note when a given species germinates or bears fruit, and the level of rain over the course of the season. The plan is to cross-check information, analyze changes and adjust accordingly.

REFORESTATION AND INCOME
To date, the Network has contributed to the recovery of more than 19 square miles of degraded forest areas over 10 years, on the Xingu and Araguaia Rivers and in the Cerrado and Amazon regions. More than 450 collectors have gathered 193 tons of native seeds, generating income of 2.5 million reais for the communities, roughly $800,000 USD.

The Network consists of 13 seed collection centers in the Xingu and Araguaia areas covering 15 rural settlements, an extractive reserve area and 17 small villages on indigenous lands.

Its impact was set to increase starting in September last year when the network was teamed up with Amazonia Live, an environmental fund created as part of the Rock in Rio music festival. Amazonia Live plans to raise funds to plant 1 million trees in deforested areas, focusing on the headwaters of Xingu River, using seeds gathered by the Network’s collectors.

Alves is keeping a close eye on the forest’s degradation. She hopes the requests for seeds double. After all, a decade after the beginning of the campaign, deforestation continues on the Xingu River. The ISA estimates that approximately 775 square miles of forests have degraded or been cleared in  the Xingu’s headwaters region over that time.

Locals believe that recovering the forest will make the land fertile for planting again after years of deterioration due to monocultural farming practice and livestock-raising. Better land means more income for farmers.

Deforestation related to land use accounts for 10 to 15 percent of global carbon emissions. Restoring forests, say the Network’s advocates, not only reduces emissions, but also preserves biodiversity, protects riverbanks from erosion, increases pollination and boosts ecotourism.