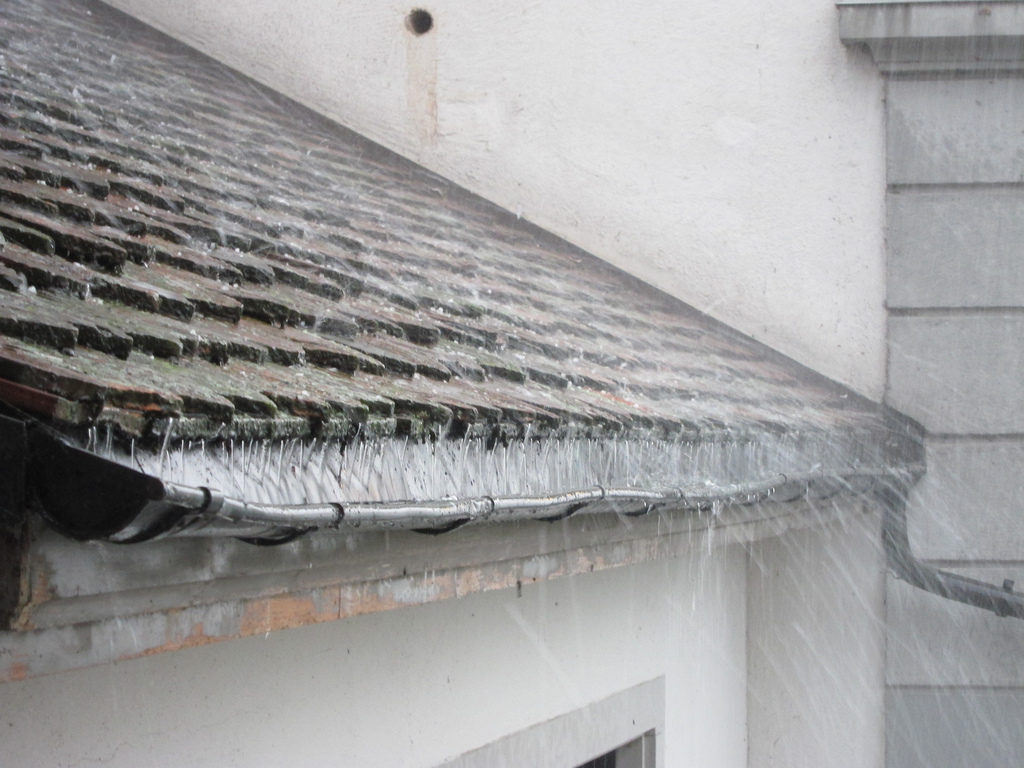 The rainwater that falls on the roofs can be collected by gutters and stored in tanks for use in gardens, bathrooms and laundry rooms (Eugene Kim/Flickr)

When Duncan Kelman, 50, bought his house, he decided there was no point in paying to water the garden. So he installed tanks with a capacity of 4,500 liters to store the rainwater from the roof of his 25-square meter (260 square feet) home office. The roof collects enough to water his plants, clean the grounds surrounding the house and even help irrigate a small park just in back of his lot.

Kelman’s investment in the installation of the tanks and water collection system was ‎£1,500 pounds. “We are restoring the house and we are going to install a 7,500-liter underground tank as well as another water tank in the attic of the house that will collect the discharges from the bathroom and the washing machine,” he says. “I expect to see a big reduction in the water bill.”

According to the UK Department of Environment, Food and Rural Affairs, a person uses about 150 liters of water per day. That means a household with a couple and two children uses about 600 liters daily. One-third of this water is used for the toilets (200 liters per day) and 50 liters for the laundry. In one year, this household uses 220,000 liters. However, 40 percent of this can be replaced by rainwater, generating savings on the water bill. From a house in the UK with 100 square meters (1076 square feet) of roof, it is possible to collect 94,000 liters of water per year, considering that total rainfall was 1,107 millimeters in 2017. The tank should be at least 5,000 liters and can be installed underground, as long as it is accessible for maintenance.

To use rainwater indoors, you need to install an electric pump to bring it to a water tank at the top of the house, for distribution to the bathrooms and laundry room. “Most people use water directly from the tanks, but some prefer a more thorough filtration system to remove any color or smell,” says Haydon Robinson, director of Guttermate, a UK company that makes water collection systems.

You can install multiple levels of filtration for the water. You’ll need more sophisticated equipment and even the wherewithal for ultraviolet radiation treatment if you want drinkable water. “But drinking water is only 20 percent of the total volume of water consumed in a home,” says David Butler, a professor of water engineering and co-director of the Centre for Water Systems at the University of Exeter in the United Kingdom. “Newly-built commercial and residential buildings, as well as universities and government facilities, often use rainwater collection systems to supply the water for the bathrooms.” A 25,000-liter tank installed to collect the rainwater that falls on the roof of the University of Exeter Innovation Centre in the UK (Photo: Sarah Ward)

Since 2006, environmental legislation in the UK has set rules limiting water and energy consumption for all buildings, to ensure their sustainability. The University of Exeter uses rainwater for its bathrooms and decorative fountains. At the university’s Innovation Centre, the 1,500 square meters of roof generate 800,000 liters of water per year. According to the UK Rainwater Management Association, 1,500 rainwater collection systems are installed every year in UK residences and 500 in the nation’s commercial real estate. Butler say residential use would be more widespread if the government provided incentives. “Germany, for example, offers discounts of up to 50 percent on the installation of these systems as well as reductions in the fees charged for the disposal of wastewater.”

One concern is the energy expenditure of the pumps that transport water from underground tanks to the top of houses and buildings. “We are developing ways to reduce the power consumption of the equipment,” says Butler. One approach is to use solar panels to power the mechanism in a sustainable way.

Experts say the environmental benefits and the money savings outweigh the investment. In addition, the system can also serve as a safety net for people living in places where water supply is precarious, especially in developing countries. “Another unnoticed advantage is the flood control,” says Peter Melville-Shreeve, a researcher at the University of Exeter. Water collection may make cities more resilient in face of rainfall variation and also prevent floods like the one shown in the photo, in the town of Eynsford, UK (Stephen Craven/Geograph.org)

Tank collection allows sewer companies to better manage the volume of water in a storm. “In the United Kingdom, every building with more than one hectare needs to have a drainage system capable of dealing with possible storms, considering their likely increase due to climate change,” says Melville-Shreeve. “This includes collecting rainwater.”

Whether to protect the drinking water supply, or to reduce the risk of floods, smart use of water resources is sustainable, simple and democratic.

LEARN MORE ABOUT
Do you want more?